Jazz in the Garden

Kayan Project is a Berlin band with musicians from different regions of the Middle East. In their performance, they switch between different tempi, genres and languages. They play Arabic, Hebrew and English folk music, mixing traditional, modern and their own compositions with improvisational jazz elements.

Museum Garden (in case of bad weather in the Glass Courtyard)
Lindenstraße 9–14, 10969 Berlin

The subtle sounds of oriental and western instruments convey very personal musical statements – lead singer Eden Cami grew up in Israel and Palestine with two cultures and two languages, both of which she holds in her heart as mother tongues. She celebrates the cultural wealth of lyrics and melodies when she sings her songs in Arabic and Hebrew – her soulful voice moved the audience at the opening of the Welcome to Jerusalem exhibition. Or Rozenfeld on double bass and Tal Yadin on acoustic guitar accompany Eden Kami’s vocals, telling the stories of their own origins. Kayan Project is about connecting countries and people through music.

Enjoy the jazz matinees with a picnic hamper from the museum café.
Please order by email: info@esskultur-berlin.de

Receive the latest news on exhibitions and events as well as special invitiations. 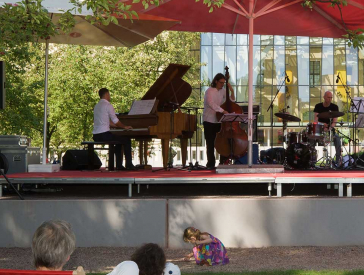