The light installation res·o·nant inspired the young ensemble of Kreuzberg’s ACADEMY to compose choreography, writing, music, and sounds. During a four-month process, the teenagers from a variety of cultural backgrounds explored the unusual spaces of the Jewish Museum’s Libeskind Building. The public is invited to join them with light, time, sound, and space and see new perspectives at the threshold between theater and museum. 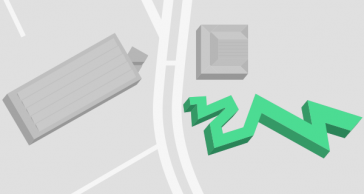 The performers in the Libeskind Building; all photos on this page: Jens Tenhaeff, BAR PACIFICO/

The ACADEMY Production House is a production center in Berlin’s Kreuzberg district by and for teenage performing artists. From dance to drama to singing to a mixture of them all, teenagers from across the city come together to produce performances that are interdisciplinary, intercultural, experimental, and artistic.

#5 Will-o’-the-Wisp is the second collaboration between the Jewish Museum Berlin and the ACADEMY production house. In May 2017, a group of Berlin-born and refugee teenagers performed the musical stage show #1 Hide & Seek in the museum’s Old Building.

With support from Friends of the Jewish Museum Berlin, the Heinz and Heide Dürr Foundation, and the Grunewald Foundation.

to the website of the production house (in German)