What exactly is Jewish music?

For the exhibition A Is for Jewish, I explored the question of what constitutes Jewish music. My research took me from synagogue music to klezmer to German rap. What comes to mind when you think of Jewish
music in Germany? Klezmer? Arnold Schönberg? Synagogue music? To be honest, rap was at the bottom of my list of associations.

But what exactly is Jewish music? This question is closely related to a second one, namely, what is Jewish? The answers to both these questions are varied. Just as we can view Jewishness from a religious, cultural, political, national, or other perspective, so too are there many different ways we can define Jewish music. What exactly is Jewish about a piece of music if it is not music from a religious context? Is it the language that makes a song, for example, Jewish? Or is it the theme or the title? Are there musical elements such as a specific sequence of notes, the phrasing, or the instrumentation that makes us realize with an A-ha! that the music is Jewish? Finally, we must also consider the question of the artist’s identity: Is music by Jews automatically Jewish? Can non-Jews compose Jewish music? This leads us back to a variation of the original question: Who is actually Jewish?

But this immediately creates an unpleasant proximity to an antisemitic reply to the original question: “Music made by Jews is Jewish.” It was often non-Jews who dwelled on the question of what constituted Jewish music—with the stated aim of excluding music that was identified as Jewish from the “German” music tradition. The best-known figure in this context is certainly Richard Wagner, author of the 1850 antisemitic pamphlet Jewry in Music.

In search of contemporary answers to the question of what constitutes Jewish music, I joined students from the Refik-Veseli-School—with whom we developed our exhibition—in interviewing Jewish musicians. We held talks with a variety of artists, whose work ranged from jazz and klezmer to cantorial song and hip-hop. They included Sharon and Ben Salomo.

Ben Salomo, who made a name for himself with the event Rap am Mittwoch (Rap on Wednesday), sees his music mainly as a kind of rap that incorporates his Jewish identity. Like his songs, our talk revolved around the opposition he had to overcome as a young Jewish immigrant in Berlin to forge his own path in life. We addressed the home he found in hip-hop as a popular subculture and rap as a form of expression. And because Ben Salomo considers himself religious, we also discussed God as a spiritual force that can connect rather than separate people. 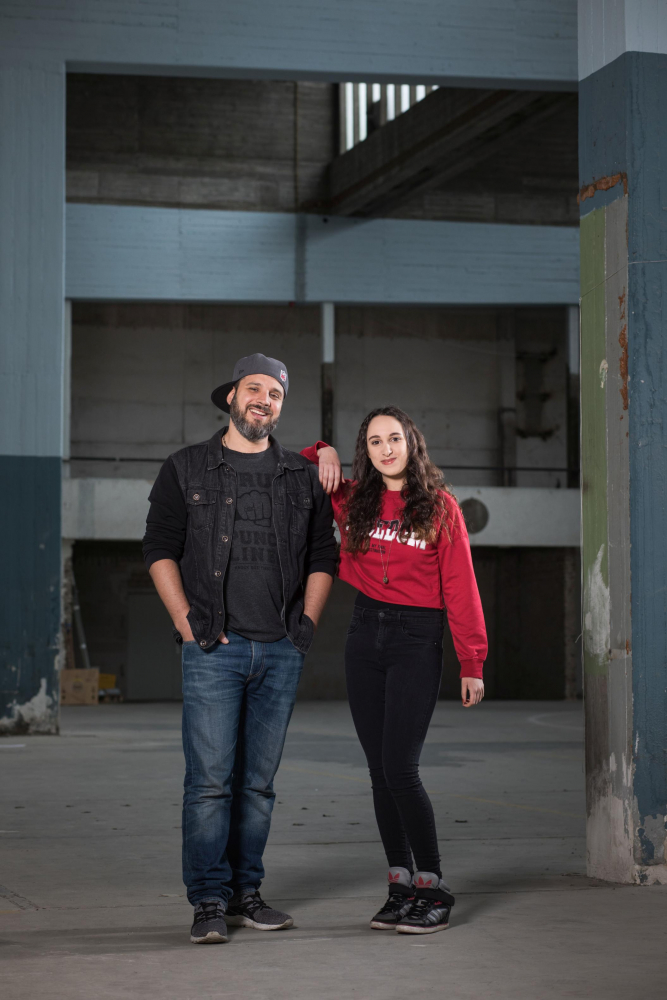 The rapper’s birth name is Jonathan Kalmanovich, and he was born in Rehovot in southern Israel in 1977. He came to Germany with his parents when he was just three and a half, and grew up in the Schöneberg district of Berlin. He says that he was ostracized by other children and that many of his friends were discriminated against because they were Jewish. Ben Salomo refused to accept this treatment, finding role models in anti-racist American rap. In our interview, he explains how he achieved a position of self-empowerment through his music:

“I wanted to make clear that Jews shouldn’t let others oppress them.”

Our meeting in April 2018 coincided with a debate on the controversial presentation of an Echo Award to the rappers Farid Bang and Kollegah. We talked about whether there should be limits to what can be said, especially in rap. Ben Salomo has formulated a few clear rules for himself: He does not use Nazi language, the N-word, or racist lines. And what counts for him when dealing with discrimination is the possibility of defense. He provides an example from battle rap, a competition in which two opponents face off, portraying themselves in exaggerated tones through their verbal art, and attacking their opponents:

“Someone once said to me, Bam, bam, bam, you're one of the stupid ones dumb as a dove and guess where you’ll end up—back in the stove! My response was: Watch out man, and listen, I’ll bomb out your stuffin’ cause this is the first Jew who gets back out of the oven! And the guy shook my hand and hugged me afterward, because that’s battle rap. That’s the ‘good sport’ aspect—that we can all laugh together afterward.”

The situation is different when a rapper like Kollegah produces albums in the studio that portray Jews in negative, stereotypical ways. The songs are heard millions of times without any opposing view having a chance. But there are limits to everything: During his twenty years in the rap world, Ben Salomo has experienced a lot of discrimination himself and has seen a lot of discrimination against others, mainly backstage. He protested by discontinuing Rap am Mittwoch in April 2018 and has since withdrawn from the scene.

The rapper Sharon does not see her Jewish identity as being central to her music. She doesn’t hide the fact that she is Jewish, but she does not explicitly perform as a Jewish rapper. For her, Jewishness is a personal matter, mainly a family matter.

Sharon has her own story to tell about rap and discrimination and it concerns what it means to be discriminated against as a woman in the scene. She grew up with hip-hop culture in Pforzheim. Rap, basketball, and Game Boys were part of her socialization. She believes that girls have come under increasing pressure in recent years to conform to a very superficial beauty ideal at the age of just twelve or thirteen. It is this development that Sharon wants to counteract with her music—for example, with her song Butterfly Effect. However, she is still treated suspiciously in the rap business and is often underestimated at rap battles or performances. She explains that after her acts, audience members often come up and say, “Hey, it’s cool that you’re doing this—as a woman!” And she wonders, “What’s the difference?” But she won’t be put off. For herself and her listeners, she has formulated following motto: “Follow your heart and don’t be afraid to be yourself.” 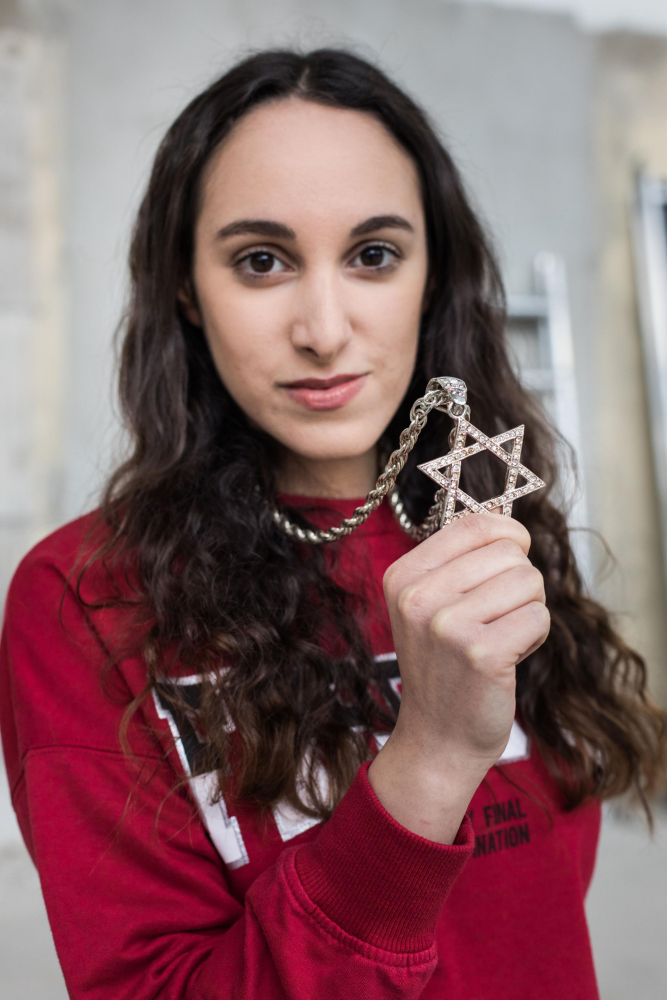 Sharon, born 1997, rapper and songwriter: "Follow your heart and don't be afraid to be yourself." Jewish Museum Berlin, photo: Stephan Pramme

From what vantage point do we listen to music? And how does our external view influence the production and reception of Jewish music?

In relation to society as a whole, how do ideas about Jews change the perceptions and self-perceptions of Jewish musicians?

The exhibition A Is for Jewish attempts to provide a forum for these ideas. It presents interviews with Sharon and Ben Salomo—as well as with four other musicians—and their answers to the question “What is Jewish about your music?” A playlist featuring a range of rap and pop music by Jewish artists in Germany gives visitors an idea of what Jewish music is like in the early twenty-first century. The German, Hebrew, Russian, Yiddish, and English titles encompass a wide variety of themes and music styles. We invite you to listen to the tracks and gain a first-hand impression of what Jewish music can be but does not necessarily have to be in Germany today.

This article was first published in 2019 in issue 20 of the print edition of the JMB Journal.

A Playlist Featuring Music by Jewish Artists in Germany

Presentation video for Jewrovision 2018 from the children and youth center LevEchad, Osnabrück 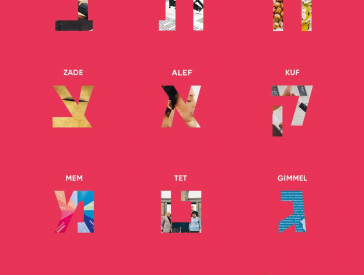 Insights into the diversity of Jewish life in Germany 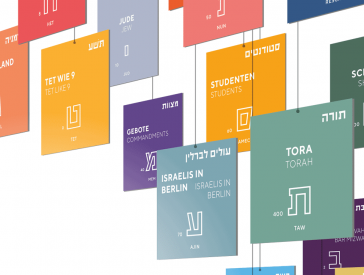