Prize for Understanding and Tolerance 2020

This year’s Prize for Understanding and Tolerance will be awarded to former U.S. Secretary of State Madeleine K. Albright and the pianist Igor Levit

Since 2002, the Prize for Understanding and Tolerance has been awarded to individuals from business, culture, and politics who have rendered outstanding service in the interest of promoting human dignity, international understanding, the integration of minorities, and the coexistence of different religions and cultures. The prize is traditionally presented at a gala anniversary dinner, awarded jointly by the Friends of the Jewish Museum Berlin and the Museum. Due to the rising number of infections at the moment, guests will not be invited to the prize presentation this year. The event will be streamed live from the museum's Glass Courtyard, including the director's address of welcome and prize presentation speeches, as well as acceptance speeches by the winners.

From the jury's statement on the selection of the former U.S. Secretary of State:

"As a political figure, professor, and author, Madeleine Albright remains an indispensable voice today. Whether commenting on immigration policy in the United States, the inconsistent progress made by feminism, or the deepening divisions in society, Albright speaks with great clarity as she engages in these debates. Though Albright only learned of her Jewish roots at the age of 59, her political consciousness is grounded in the double experience of escape: from the National Socialists in Prague and later from communist dictatorship in Belgrade. This experience as well as the deep conviction that the United States did too little to oppose the annihilation of the Jews in Europe strengthened Albright's resolve as Secretary of State. For her passionate engagement, her political vision, and her strident voice, the jury of the board of the Friends of the Jewish Museum Berlin presents Madeleine Albright with the Prize for Understanding and Tolerance 2020."

"Igor Levit sees no boundaries between aesthetics and everyday life, between music and social engagement. The pianist not only criticizes the customary apolitical contextualization of classical music, he himself is among the most important political voices of his generation. With bold statements, he positions himself clearly against racism, anti-Semitism, homophobia, and misogyny. Nor does he allow himself to be driven off course in his engagement, although he is the object of hostility and threats because of it. For Igor Levit, it is also essential to show solidarity in his artistic activities. In spring of this year, he streamed over 50 "house concerts" amidst the corona pandemic, a gesture of togetherness. His musical style combines virtuosity with extraordinary powers of interpretation. For him, the piano is a place of freedom, and freedom means: freedom from fear. With the Prize for Understanding and Tolerance, the jury of the board of the Friends of the Jewish Museum Berlin Foundation is not only honoring an extraordinary pianist, but also an extraordinary human being, whose engagement is as untiring as it is deeply humanitarian."

Madeleine K. Albright is among the most influential politicians of our era. From 1997 to 2001 under President Bill Clinton, she was the first female U.S. Secretary of State. Born in 1937, the daughter of a Czechoslovakian diplomat, she twice went into exile with her family. In 1939 they fled the National Socialists to England; in 1948, they went to the United States to escape the communists. Interested in international politics from an early age, Madeleine Albright studied political science at Wellesley College. She received her doctorate from Columbia University's Department of Public Law and Government. She later became a professor of diplomacy at the renowned Georgetown University in Washington, D.C. Since the 1970s, she has been active in the Democratic Party. She advised Senator Edmund Muskie and was a member of President Carter’s National Security Council staff, working for Dr. Zbigniew Brzezinski. Beginning in 1993, she was the U.S. Ambassador to the United Nations. In 1997, Madeleine Albright was appointed by President Bill Clinton and sworn in as the 64th U.S. Secretary of State. She was the first woman to hold this office. After her time in office ended in 2001, Albright founded a strategic consulting firm in Washington, D.C., the Albright Stonebridge Group. Albright recognized early on how important networks of women are. As U.S. Ambassador to the UN, she banded together with her few female colleagues to achieve the goal that more women be appointed to high positions in the U.N. In the awareness that women could only assert their interests if they acted in a unified way, as Secretary of State she also arranged a meeting of female foreign ministers from around the world. She has received many awards and honors for her political and social actions, including her 2001 election as a Fellow of the American Academy of Arts and Sciences. In 2012, Barack Obama presented her with the Presidential Medal of Freedom, the highest civilian award of the United States.

Igor Levit was born in 1987 to a Jewish family in Nizhny Novgorod (formerly Gorki), Russia. Levit received piano lessons from his mother from an early age and gave his first solo concert at the age of four. In 1995, the family moved to Hanover, where he began a course of study for highly gifted musicians at the Hanover University of Music, Drama, and Media. He completed his studies with the best score in the history of the institution. He studied under Karl-Heinz Kämmerling, Matti Raekallio, Bernd Goetzke, Lajos Rovatkay, and Hans Leygraf, among others.

The pianist Igor Levit is among the most important classical musicians of today and has been awarded numerous prizes. As the youngest participant at the 2005 International Arthur Rubinstein Competition in Tel Aviv, Igor Levit won the silver medal, along with the Special Prize for Chamber Music, the Audience Prize, and the Special Prize for the Best Performance of Contemporary Compulsory Pieces. In 2018, he won the Gilmore Artist Award and was named Instrumentalist of the Year by the Royal Philharmonic Society. In 2019, he was appointed professor for piano at the Hanover University of Music, Drama, and Media.

Levit's political and social engagement against anti-Semitism and right-wing extremism has attracted much attention. For example, in the wake of the 2018 scandal around the rappers Kollegah and Farid Bang, he gave back his ECHO KLASSIC music prize. In his acceptance speech for the 2019 Opus Klassik Prize, he spoke out against increasing linguistic brutality. He dedicated his prize to the victims of the attack in Halle. Igor Levit has also received several prizes for his political engagement. In 2020, on the occasion of the 75th anniversary of the liberation of Auschwitz, the International Auschwitz Committee honored him with the "Statue B" as the "Gift of Remembrance." For his cultural engagement during the corona lockdown, Federal President Frank-Walter Steinmeier honored him with the Order of Merit of the Federal Republic of Germany on 1 October, 2020.

Images for reporting can be used with proper image credit. They will be available to download beginning on 31 October, 10 p.m. at: Bildmaterial für die Pressearbeit.

If you are interested in reporting on the prize, we can send you a streaming link for the prize ceremony until Friday, 30 October, 12 pm. 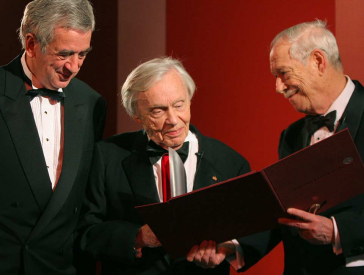