A Concert in the Cabin

An idyllic Mediterranean scene and an announcement for a “concert in the cabin” of works for violin and piano by Mozart and Bach. Nothing in this notice alludes to the actual setting in which the event took place, namely in the Onchan internment camp on the Isle of Man, where some 1,500 men, most of them Jewish refugees from Germany and Austria, were detained by the British government as enemy aliens between June 1940 and July 1941. The biographies behind the three names mentioned on the announcement could not have been more different.

Dr. Willy Salomon, born 1891, was a pianist, composer, teacher, music journalist, professor at Dr. Hoch’s Conservatory in Frankfurt, and a gifted accompanist who often performed at the city’s opera house, where he also conducted. Salomon moved to Paris after the Nazis took power. After the city was taken by the German army in the spring of 1940, he was deported to Buchenwald. Thanks to the efforts of his sister’s fiancé, he miraculously was able to escape and make his way to England, where he was interned not long after having arrived.

Hans Schidloff was born in Vienna in 1922 and went to England with his sister on a Kinder­transport in December 1938. Interned at age 18, his performances in Onchan were his first in front of an audience. It was there and at a previous internment location that he met Siegmund Nissel and Norbert Brainin. They too were young men from Vienna and together with Schidlof they founded the Amadeus Quartet in 1948, which achieved world fame in the ensuing years.

The artist who made the announcement was Heinz Edgar Kiewe, born in Königsberg in 1902. He had studied at the Reimann Art School in Berlin and had left Germany for England in March 1933, where he founded the Art Needlework Industries. Together with the artist and writer Jack Bilbo, he created the “Popular University” in the Onchan internment camp, which organized lectures, concerts, theater performances, and language and other classes, drawing upon the tremendous spectrum of knowledge and talent that the internees brought with them. Kiewe, who produced many more announcements of the University’s events, wrote not long after his release that “internment certainly was an experience I would not have wanted to miss, having met at least a dozen or more friends I should not like to part with”[^1] and later referred to his incarceration in Onchan as “the best time of my life.”[^2]

“Sunday’s concert was a success.”

The evening concert was attended by some two hundred fifty men. In a letter written shortly thereafter by Hans Schidloff to his guardian, the young violinist noted: “Sunday’s concert was a success. Bach went very well. I am now going through the César Franck Sonata with Prof. Salomon.”[^3] And in a short article in the camp’s newspaper, Onchan Pioneer, published a week after the performance, entitled “Music in Internment,” Willy Salomon noted: “We had the short opportunity to admire the young violin player Brainin, whose place has now been taken by the promising Schidloff.” He added prophetically, “I believe that the artists we have met here could greatly enrich the musical life of this country.”[^4]

The concert announcement is one of nearly two hundred documents related to the Popular University in the Onchan internment camp that were collected and preserved by Carl Theodore Marx, himself a Jewish refugee from Frankfurt interned in Onchan who had served as the Popular University’s honorary secretary. They were donated to the Jewish Museum Berlin by his heirs together with a large collection of family papers in 2013. 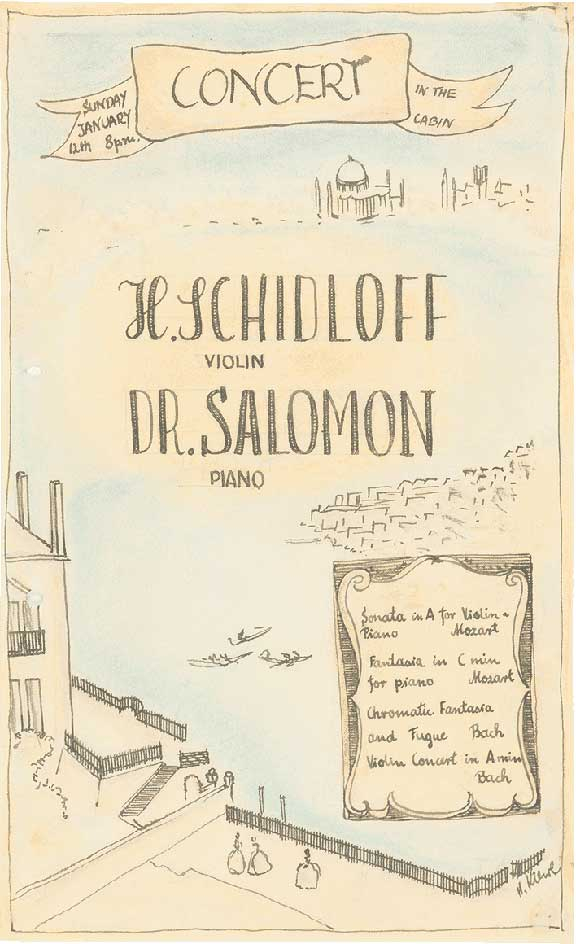