This installation depicted two women traveling east from Berlin, with a violin and the score of Kafka Fragments by the Hungarian composer György Kurtág in their luggage. In an abandoned roundhouse along the railway line, they discover a resonant space for Kurtág’s music.

The footage follows the singer Caroline Melzer and the violinist Nurit Stark along their subsequent stops in Poland and Russia. However, the East through which the women travel begins to transcend specific locations and drifts into the imaginary. The two musicians become figures that sometimes seem to come from the post-Soviet daily grind, other times from the world of Franz Kafka. 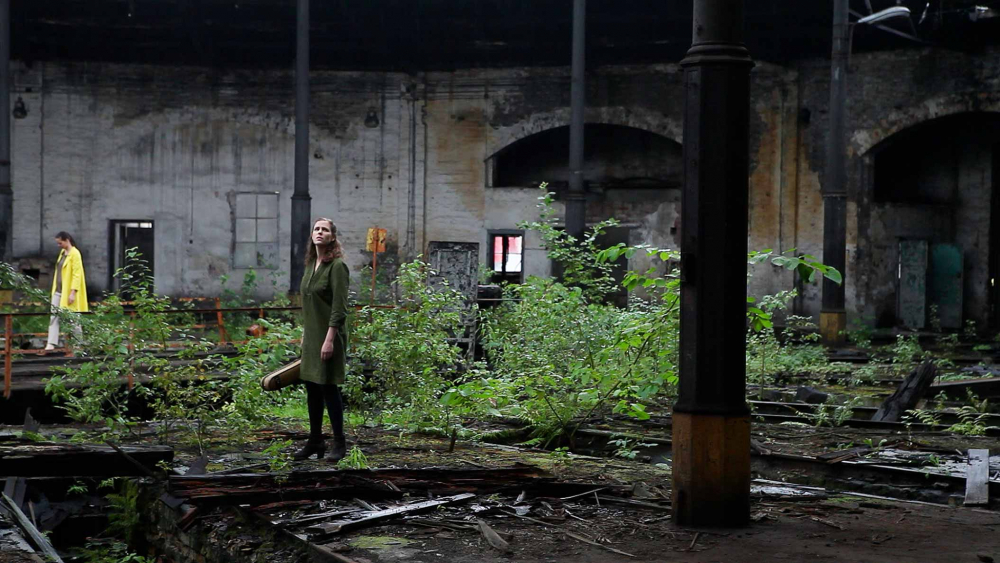 Kafka Fragments, op. 24, composed in 1987, ranks among the most significant works of contemporary chamber music. Kurtág used aphorisms and isolated phrases by Franz Kafka that touch on the motif of travel and the road. The composer dreamed that his work would be performed beyond the concert hall: in schools, universities, or clubs. The fragments were conceived to resemble fliers blowing in the wind at passersby.

Kurtág’s cycle was featured in a film installation at the museum that explores the absurd potential of Kafka’s text fragments paired with music clips. The circular arrangement of screens, just like the roundhouse, became a wheel through time.

A production by Roundhouse Reverb GbR in cooperation with the Jewish Museum Berlin, deSingel International Arts Campus Antwerp, and Deutschlandradio Kultur. Funded by the Hauptstadtkulturfonds.

Hungarian composer and pianist György Kurtág was born in the Romanian city of Lugos in 1926.
More on Wikipedia

Jewish writer Franz Kafka was born in 1883 in Prague and, next to fragments of novels like Das Schloß (en: The Castle) and Der Process (en: The Trial), he left behind a multitude of stories, journal entries, and letters. Wikipedia offers an extensive summary of his life and work.
More on Wikipedia

Due to Kafka's early death in 1924, his work is already in the public domain and, for the most part, available online.
Project Gutenberg (in German)

For those who would prefer to listen to Kafka’s texts, Wikisource has recordings for some of his works:
Kafka's Works on Wikisource