“Three days after the curfew was lifted, it was clear that no one was planning to leave their home.”

What happens when we settle into the isolation, and the isolation settle into us? And what when we are reminded that there is a reality outside the four walls of our home? In an Israeli-Japanese coproduction, writer Etgar Keret and choreographer Inbal Pinto present a danced short story, full of whimsical detail and dystopian humor – their personal creative adventure in COVID-19 Land 2020/21.

On five evenings (3 to 7 February, from 5.30 to 7.30 pm) of the second lockdown in Berlin, the Jewish Museum Berlin is projecting the video Outside onto the façade of the closed Libeskind building. We kindly ask that the public hygiene and distance regulations are followed in the exterior spaces in front of the building.

Outside, Video, 7 minutes, Japanese with German subtitles, in a Loop

Etgar Keret is an Israeli writer and screen writer. His short stories are worldwide bestsellers, they have appeared in the New York Times, The Guardian and Le Monde as well as numerous books, and are translated into more than 45 languages.

Inbal Pinto is an Israeli choreographer, costume and stage set designer and director. Until 2018 she was the artistic director of the „Inbal Pinto Dance Company“, which she foudned in 1992. 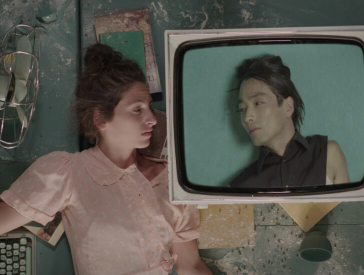 Artist Talk with the Artists Inbal Pinto and Etgar Keret

About the video projection Outside

Inside Out – Etgar Keret