The series began with works from the Freud Cycle of the American artist Robert Longo, which were on display at the Jewish Museum Berlin from 30 May to 18 August, 2002.

The large-format black and white drawings came into being in New York in 1999 and 2000. They show details from Sigmund Freud’s apartment in the Berggasse 19 in Vienna, and resemble photographs at first glance. And indeed they were inspired by photographs taken shortly before Freud’s emigration on 4 July, 1938. Edmund Engelman documented the rooms in which the doctor and founder of psychoanalysis lived and worked. Robert Longo took details from these photographs – the apartment door, the blanket on the couch, figures from Freud’s collection, or the oven in Anna Freud’s treatment room - and made highly magnified drawings of them. Through this process of transfer and through the artist’s interpretation, the intimacy still present in the photographs of the “Gedaechtnis-hoehle” (memory cavern) becomes a nightmarish experience. Fragments of the familiar appear with a ghost-like quality from the opaque black. The glass and the heavy black frames banish these pictures to a sealed and inaccessible world.

Since the end of the 1970s, Robert Longo (born in 1953 in Brooklyn), has built up a diverse oeuvre of drawings, sculptural installations, reliefs, but also music videos, films, and stage sets. The main theme of his work has been the power of the omnipresent flood of images with which the media, commerce, and art bombard us. In contrast to his early works, the central theme in the Freud Drawings is less the threat through pictures but the threat of the historical moment at which the photographs were taken. The forced clearing of the Freuds’ legendary rooms transforms this from the symbol of a new science to the symbol of an epoch that has come to an end, a life destroyed.

In the context of the Jewish Museum, this work is also an examination of one of the most important personalities of German-speaking Judaism and of a turning point in German-Jewish history.

Robert Longo’s website features a broad selection of his artwork from the late 1970s to the present, including nearly a dozen of his paintings from the Freud Cycle.
Website of the artist Robert Longo 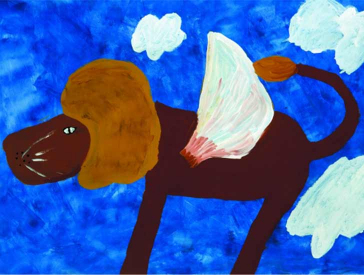