“He may not celebrate Christmas, but he’s still the #1 Advent hero”

A Somewhat Peculiar Honor for the “Shalom Rollberg” Initiative

Christian Christmas, a Jewish Israeli, and Muslim children from Neukölln. This combination clearly appealed to Berlin’s largest tabloid and an energy supply company when they were recently conducting their annual search for an “Advent hero.” (In the Christian tradition, Advent is the month-long period leading up to Christmas.) For the sixth time, they were looking for a Berliner engaged in volunteer work to honor. They selected Itay Novik, who is forty-five, was born in Tel Aviv, has lived in Berlin since 2011, and just so happens to be my boyfriend.

For five years now, he has been volunteering in his neighborhood of Neukölln – branded a “flashpoint district” – for the Shalom Rollberg initiative. He is just one of many Jewish volunteers who tutor the local children and teens, who are mostly of Turkish or Arab descent, or organize recreational activities for them. The project is under the umbrella of the MORUS 14 club, which nominated Itay to represent all the mentors as an “Advent hero.”

More about the project on the website of the Morus 14 club (in German).
More on morus14.de/shalom-rollberg

“Shalom Rollberg wouldn’t be anything without the young people of Neukölln who come every week and are, if you ask me, ambassadors of transformation.”

Itay gives English lessons once a week. But now and then he also devises an extracurricular activity to mix it up. Because food and the culinary arts are both his passion and his profession, he has prepared various recipes with the kids, from Christmas cookies to kreplach, a traditional Ashkenazi-Jewish dish that his grandmother, who was born in Poland, introduced him to as a child. Another highlight for the kids was when he organized a cooking class with them at a fancy restaurant whose Michelin-starred Israeli chef is a friend of his.

At these weekly gatherings, the fact that Itay is Israeli and Jewish is immaterial. It is not a secret, but neither is much fuss made about it. One of the girls only realized this after a few weeks and, surpised, asked him out of the blue: “Are you from Israel?” Another girl cut in, “Yeah, yeah, he’s Israeli. Can we move on now?!” But the significance Itay gives this little episode shows that the setup creates an atmosphere of normalcy despite the unusual circumstances. 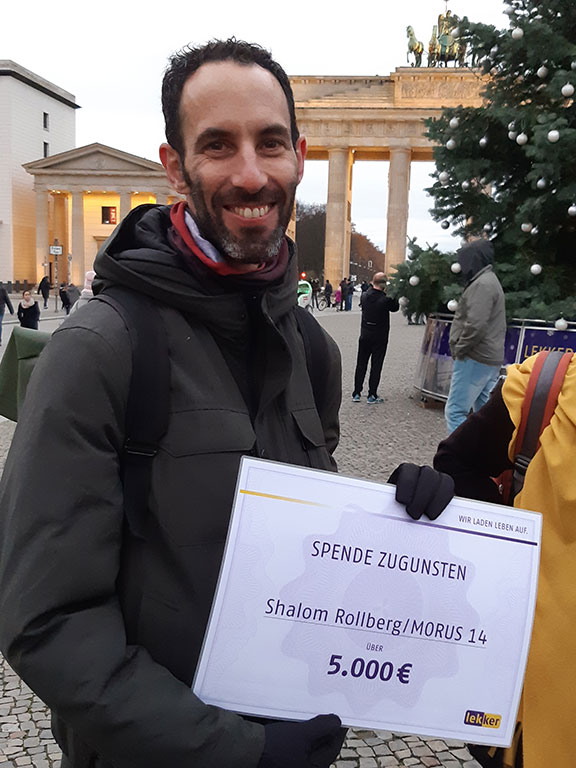 For a good cause: Itay holding the symbolic check for a donation to Shalom Rollberg, Berlin, 29 November 2020; photo: Jörg Waßmer

Shalom Rollberg then informed Itay that he had been selected by the tabloid and the energy supply company as their “Advent Hero” – and that the club had won a 5,000 € donation as a result. This was followed by an interview in the press, a photo shoot on the initiative’s premises – without the children, of course, due to the coronavirus. The following day, the newspaper ran an article headlined “He may not celebrate Christmas, but he’s still the #1 Advent hero” For the first time in my life, I bought a copy of that tabloid. Of all newspapers, I thought to myself. Itay was less bothered about that. We chuckled together at the headline.

Itay was notified that on Sunday, 29 November, he would be symbolically handed a check and invited to perform his duty as “Advent hero:” switching on the lights of the 15 meter tall Christmas tree on the plaza in front of the Brandenburg Gate. A Christmas tree of all things, I thought to myself. Even I steer clear of Christmas markets and holiday hype. And in front of the Brandenburg Gate, of all places! I am still a fan of the artist Horst Hoheisel’s proposal, back in 1995, of grinding down this German national landmark into dust and then scattering said dust on the plot where the Memorial to the Murdered Jews of Europe now stands. But of course, in the end, I accompanied Itay for the occasion. Somebody had to take pictures, after all.

Interview with Horst Hoheisel on his project (in German)
More on zermahlenegeschichte.de 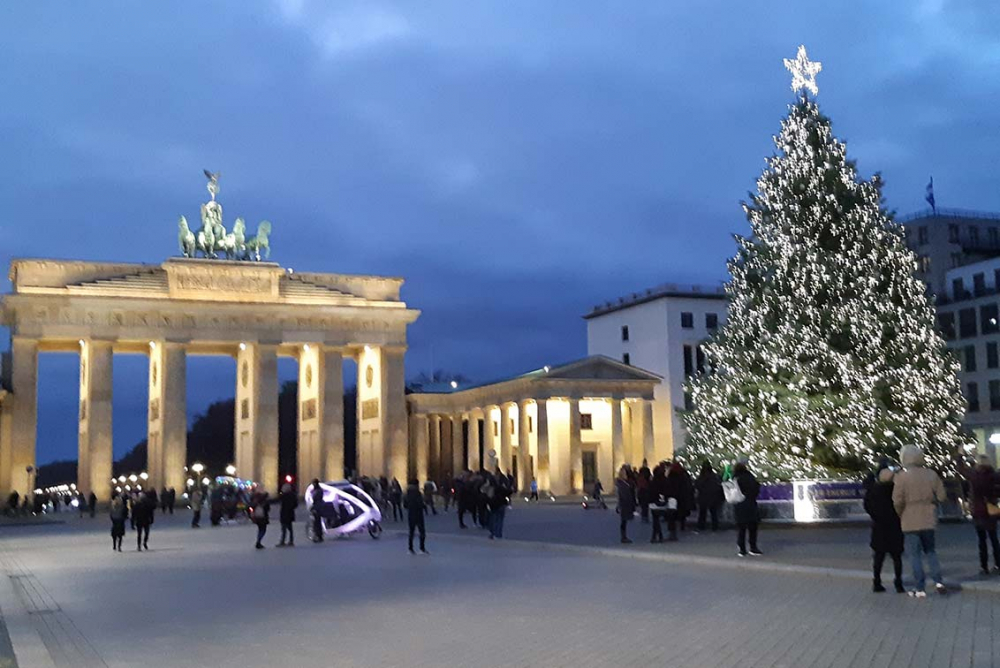 A bit blurry from excitement: The Christmas tree lights are switched on, their radiance competing with the Brandenburg Gate for attention; Berlin, 29 November 2020; photo: Jörg Waßmer

Reactions from Itay’s Family in Israel

Meanwhile, his family in Israel was elated – and not only after the Israeli TV news picked up the story. His mother, who was born in 1948 at a DP camp in Kassel to two Polish Shoah survivors, grew very emotional and posted on Facebook about how proud she was of the man her son had grown into:

It must have felt peculiar to her, given that Germans had murdered her parents’ families during the Shoah.

“Values and love, regardless of religion or background”

Itay is not uninterested in this story, but it holds much less significance to him than it does to me. I was also the one who took the initiative a few years ago on our visit to the former Jägerkaserne military base in Kassel, where his mother spend the first year of her life before her parents emigrated with her to the newly founded State of Israel. On the same trip, we’d also stopped in the Hessian town of Ziegenhain, where Itay’s grandparents had met and married at a DP camp. At the Arolsen Archives – to his family’s surprise – I found documents furnishing evidence of his grandparents’ time in the DP camp and her efforts to obtain reparations (Wiedergutmachung).

Historical Pictures from the Family Album 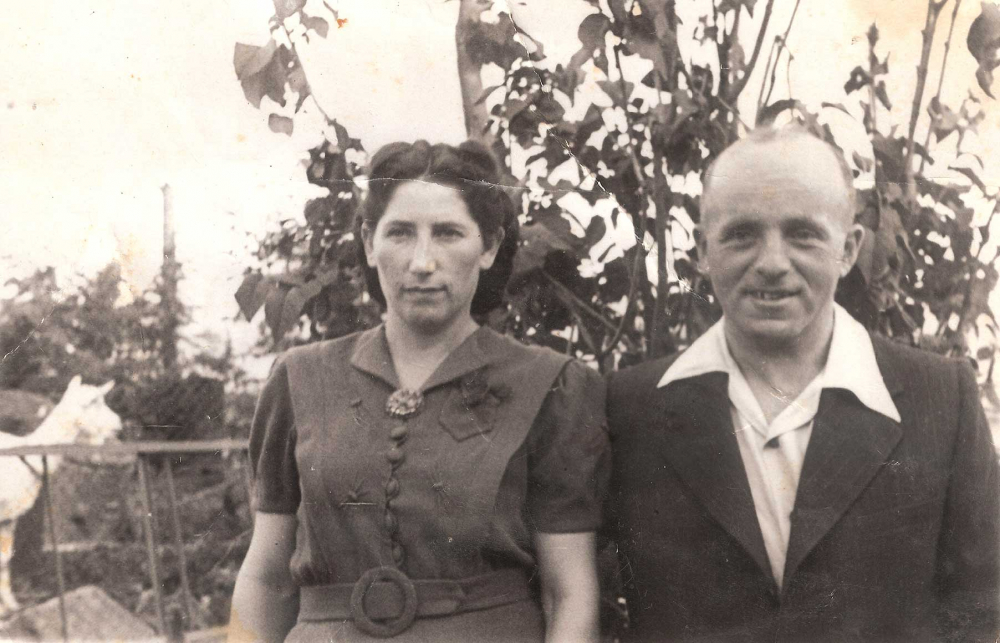 Itay’s grandparents Hersch Weinberg (1909–1981) and Ester Goldfarb née Milberger (1917–1974) met at the DP camp and were married in 1947. Hersch, who was born in Warsaw, had survived forced labor in ghettos and camps in Dęblin and Częstochowa. In 1946, he arrived in the DP camp of Ziegenhain, in the US-occupied zone of Germany. Ester Goldfarb was born in Siedlce, Poland. When Germany invaded Poland, she fled to Soviet-annexed eastern Poland, but in 1941 the German Wehrmacht invaded the city of Lwów (now Lviv, Ukraine, and known in German as Lemberg). She was conscripted to forced labor in the Janowska camp, but escaped and went into hiding. Her first husband and young child died during the German occupation. After an initial stay at the DP camp in Schwarzenborn, she arrived in the Kassel DP camp; courtesy of Zipora (Zipi) Elka Novik-Weinberg 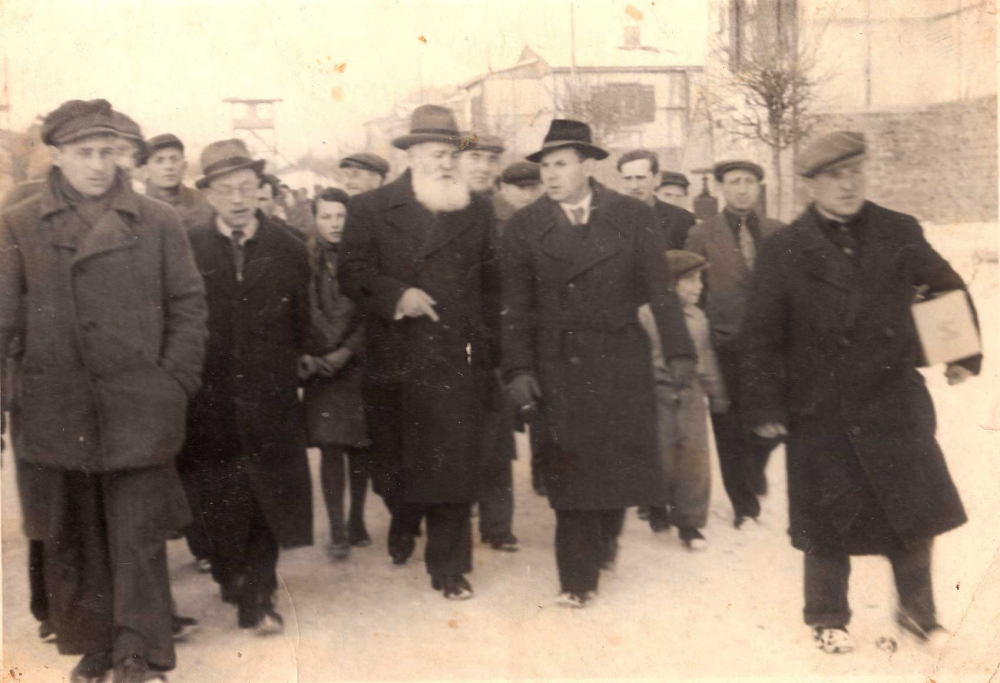 In the winter of 1946–47, the Zionist politician Jacob Zerubavel visited the Ziegenhain DP camp; here, he is walking down its snowy main street. Visible among his retinue is Hersch Weinberg (right), carrying a parcel; courtesy of Zipora (Zipi) Elka Novik-Weinberg 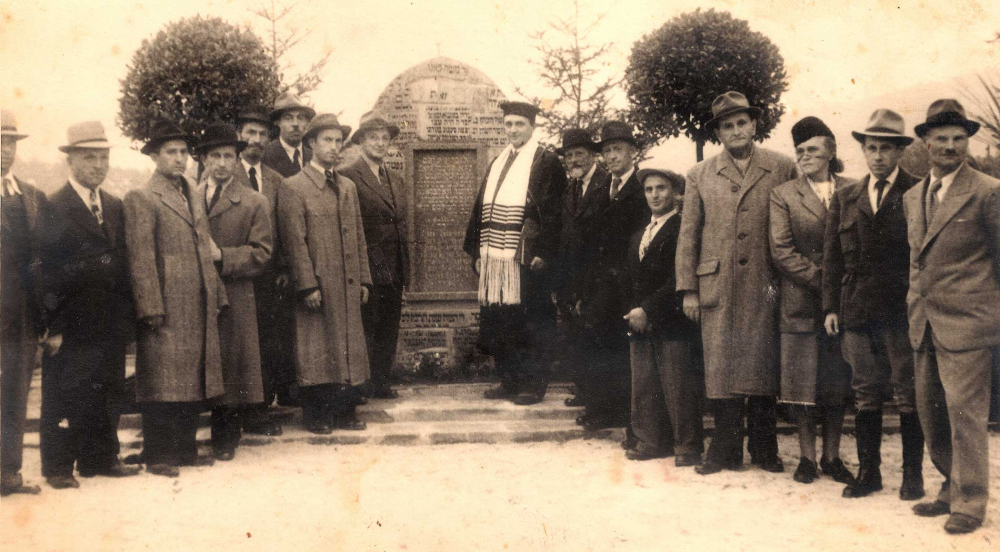 Together with other displaced persons from Kassel, Hersch Weinberg (2nd from left) traveled to Wolfhagen in April 1948. At the town’s Jewish cemetery, they took part in a dedication ceremony for a stone memorial constructed using fragments of desecrated gravestones. The State Rabbi of Hesse, Wilhelm Weinberg, is standing at the center of the image; courtesy of Zipora (Zipi) Elka Novik-Weinberg 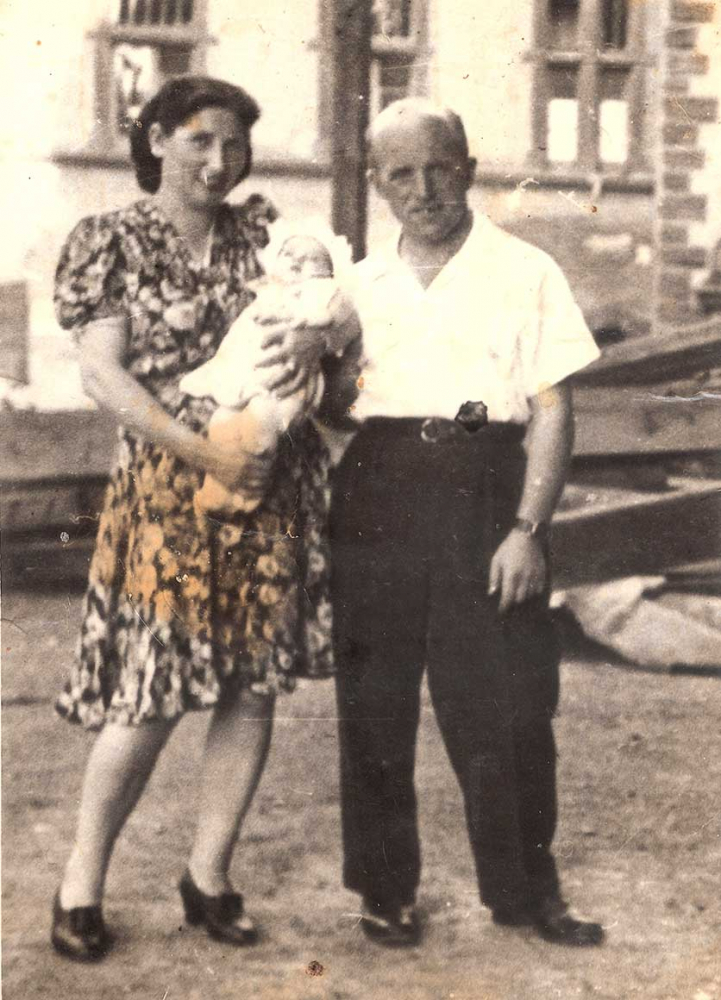 Itay’s mother was born in Kassel two days before the declaration of the State of Israel. She was given the middle name Elka, after her grandmother, who had been murdered at Treblinka. In this photo, her parents are holding her outside the DP camp of Jägerkaserne in Kassel. The following year, the Weinbergs emigrated to Israel; courtesy of Zipora (Zipi) Elka Novik-Weinberg 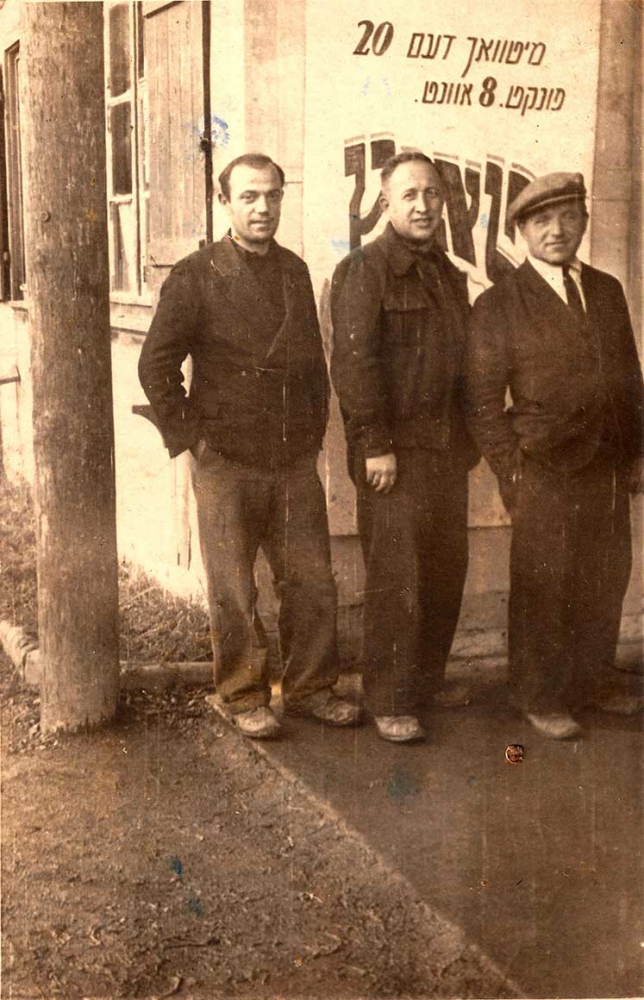 A wall of the DP camp bears a sign in Yiddish reading “Event on Wednesday the 20th, 8 sharp.” Three men including Hersch Weinberg (left) posed for a photo in front of it. The Yiddish word for “dance” can be discerned, partly obscured by the men; courtesy of Zipora (Zipi) Elka Novik-Weinberg 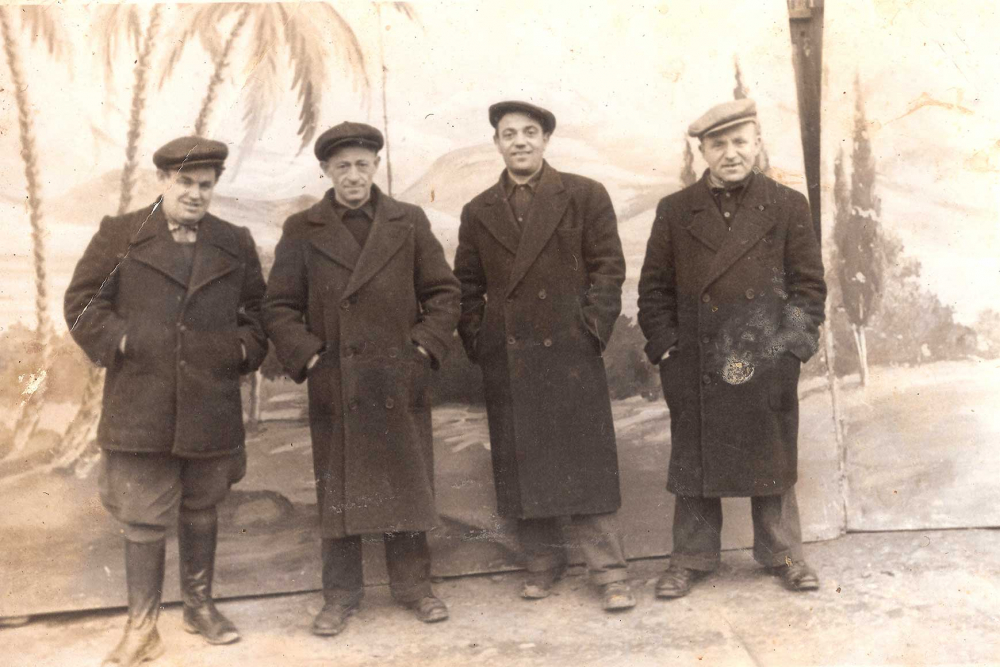 Four men in winter coats are standing in the DP camp in front of a painted backdrop depicting a Mediterranean landscape with palm trees. Is this scenery from the camp theater? Is it portraying an Israeli landscape? In 1949, Hersch Weinberg (right) emigrated there with his family; courtesy of Zipora (Zipi) Elka Novik-Weinberg 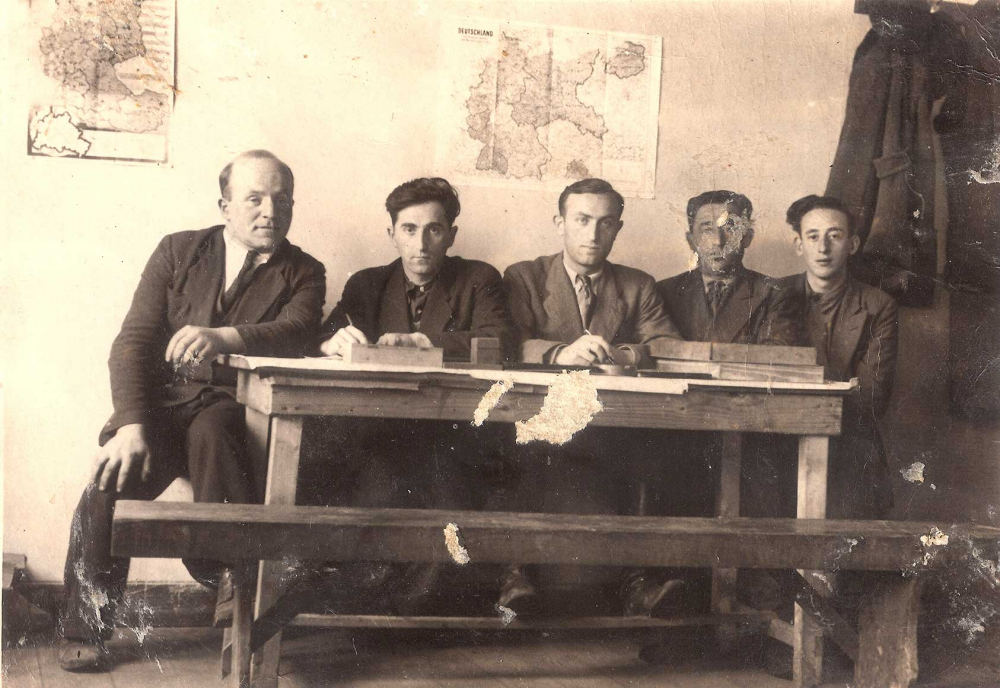 What role was played at the camp by these five men, including Hersch Weinberg (left), who are sitting so seriously at the table? The answer is unclear. Hanging on the wall is a map of the Allied occupation zones; courtesy of Zipora (Zipi) Elka Novik-Weinberg

In tracking them down, I naturally benefited from my familiarity with archival research obtained during my work at the Archive of the Jewish Museum Berlin. The fact that my boyfriend is a (secular) Jewish Israeli is not irrelevant to my profession. Obviously, it’s not why we fell in love. And my relationship with him does not justify my role as a non-Jew working for a Jewish Museum. But it does forge a present-day connection and build a bridge to my daily life and my own lived reality – even though Itay – the Advent hero who doesn’t celebrate Christmas – actually doesn’t celebrate Hanukkah either! It would never occur to him to go to Pariser Platz for the Hanukkah candle lighting.

Back to the little event at the Brandenburg Gate. The check was quickly handed over and the lights switched on. Because of the pandemic, there was no audience. It was just a brief press opportunity. Itay, who had no idea what to expect but did not want to be caught off guard, had written a short statement just in case. He wouldn’t have been comfortable giving a speech in German on the spur of the moment. In the end, he was not put in the position of having to speak, which was quite a relief to him. His statement would have ended with these words:

“Shalom Rollberg wouldn’t be anything without the young people of Neukölln who come every week and are, if you ask me, ambassadors of transformation. All children deserve opportunities to experiment, to dream, to fulfill themselves. And they also deserve to have someone who believes in them. Isra, Dana, Sabrina, Shirin, Lina, Bathul, Sara, Abdul Karim and all the others who I haven’t listed by name. Without you I wouldn’t be standing here. I learn so much from you when I teach you, and you are all stars and my heroes.” 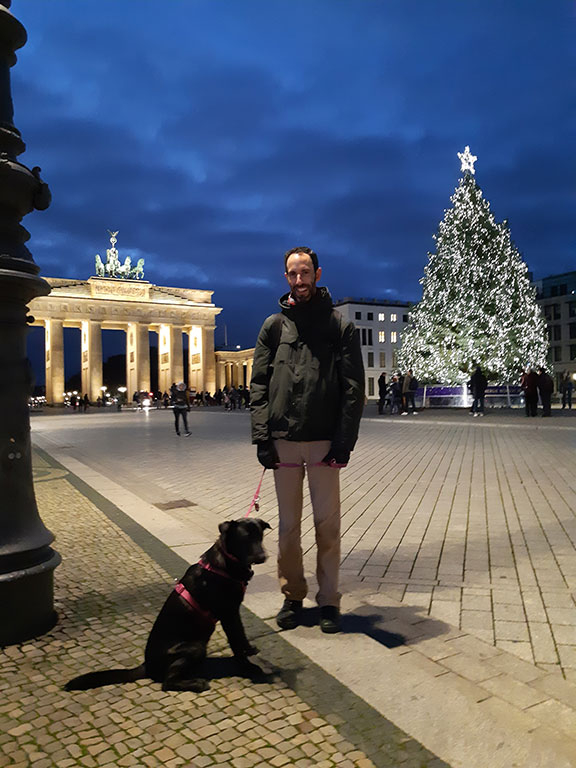 Relieved after all the fuss: Itay with his dog Lila in front of the lit-up Christmas Tree at the Brandenburg Gate, Berlin, 29 November 2020; photo: Jörg Waßmer

Jörg Waßmer (2020), “He may not celebrate Christmas, but he’s still the #1 Advent hero”. A Somewhat Peculiar Honor for the “Shalom Rollberg” Initiative.
URL: www.jmberlin.de/en/node/7667