On the Way to a Poetic-Political Utopia

Else Lasker-Schüler, Durch die Wüste Sinai (Through the Desert of Sinai), about 1935, purchase, 2006

A group of people, dressed in colorful clothes, crosses the image from right to left with long, sweeping strides. According to the caption, they are traveling “Through the Desert of Sinai.” But they are not wandering aimlessly; in fact, it is more like they're marching. Strong brush strokes and bright colors connect the gouache with the formal language of Expressionism, while the staggering of the figures reveals influences from ancient Egyptian art.

Else Lasker-Schüler completed this piece around 1935. At that time, she was also working on her prose text Hebräerland (Land of the Hebrews), in which she processed impressions from her first trip to Palestine. The book was published in 1937 by Dr. Oprecht & Helbing in Zürich, and included eight drawings and a cover illustration by the author. Many of the images are of street scenes. Like the text, they are poetic interpretations of experience.

Else Lasker-Schüler (b. Elberfeld, 1869; d. Jerusalem, 1945) is one of the most important Modernist poets. Her visual works have always formed a unified whole with her poetry, yet they have only recently begun to receive more attention.

She was part of the artistic avant-garde, and dealt with biblical, Jewish and Middle-Eastern motifs throughout her life. Cultural Zionist intellectuals were also aware of her poems as early as 1900.

After she was harassed on the streets of Berlin in 1933, she fled to Zürich. From there, she traveled to Palestine in 1934 and 1937. While she was on her third trip in the summer of 1939, war broke out and this, along with the rejection of her visa, prevented her from returning to Switzerland. She died in Jerusalem in 1945. 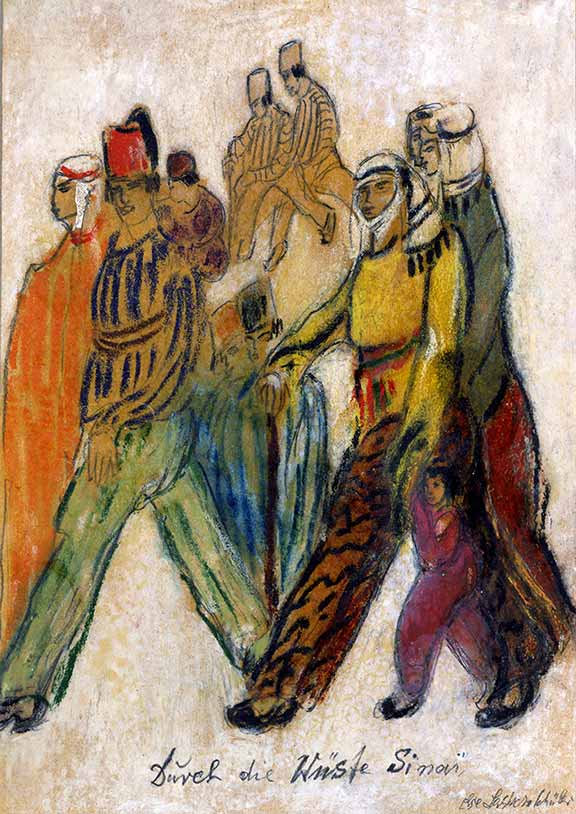 “I Came from the Desert”

In the spring of 1934, Else Lasker-Schüler herself chose to go to Palestine “through the desert of Sinai.” While the usual route was through the Adriatic to Haifa, she traveled via Genoa and Alexandria. “Desert, nothing but desert around us, desert, soft, yellow silence!” is how she described the train trip across the Sinai Peninsula in Hebräerland. Yet beyond her fascination with the landscape, she wanted to experience the biblical path through the Sinai Desert, and “despite the great effort (...) know it through adventure.”

After about two months, she returned to Switzerland. There, in a process that took almost three years, she worked on the text and illustrations for the book: in her own words, she sat “at the table in front of the little window in my room in Zürich – but with Eastern eyes. I was in the land of the Bible, which is not of this world!”

The sale of drawings, including Durch die Wüste Sinai, helped to support her. The composition of this drawing is similar to illustrations that appeared in the book, for example the frontispiece “Die Kolonisten am Sabbattag in Jerusalem” (The Colonists on Sabbath Day in Jerusalem), a group of pioneers with the quote “Gesegnet ist die Erde, die uns viel Brot gibt” (Blessed is the earth which gives us so much bread), or a beggar amongst passersby on Jaffa Road in Jerusalem. 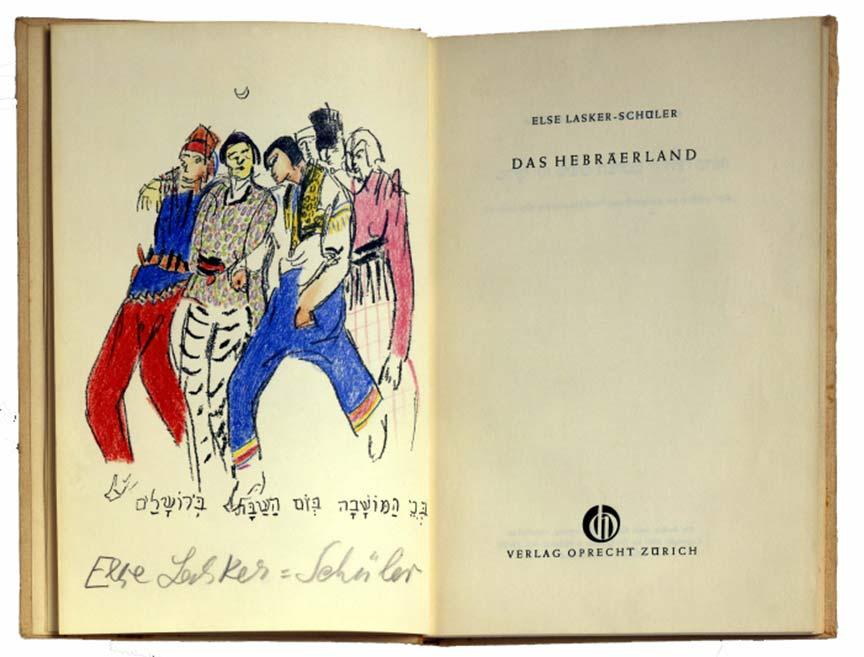 “Every guest that comes to this city changes their clothes for the consecration of the garment.” (Hebräerland, p. 10)

“The Consecration of the Garment”

Else Lasker-Schüler used bold colors for the striped jackets and colorfully patterned trousers of the “walkers,” who appear to be Middle Eastern. On their heads, some wear a red fez, others a keffiyeh with black cords. So are the people depicted here Arabs? Perhaps. Else Lasker-Schüler's fascination with the Middle East was shared by many Modernist artists. But at the time, the Arab keffiyeh was not uncommon amongst the Jewish pioneers, and many Jews, especially Middle Eastern, followed the Ottoman tradition of wearing a fez.

It was only in the years that followed that these headdresses acquired political meaning through the Arab independence movement: the fez came to represent the former Turkish colonial power and large landowners, while the keffiyeh symbolized the native Arab farmers. Yet it is precisely these distinctions that Else Lasker-Schüler subverts poetically through text and image.

“You can barely distinguish the features of these twin tribes, they are intertwined, woven into flax through time under the same sun, cleansed by the same ocean breeze.” (Hebräerland, p. 79)

“Palestine Is Not of this World”

Else Lasker-Schüler is not blind to the realities of the country. She mentions the massacre of 1929, the raids on kibbutzim and a protest against opening the borders to refugees from Europe. But in doing so, she insists on her genuinely artistic perspective:

“The artist does not carry time between two covers, on a chain; he takes his cue from the hands of the universe, so he always knows what the primeval cuckoo clock has struck!” (Hebräerland, p. 113)

She also elevates the reality of Palestine above everything earthly:

“Palestine cannot be compared to any land on Earth. Palestine is not entirely of this world, it borders on the hereafter and, like the Heavens, cannot be measured in time and space.” (Hebräerland, p. 14)

“It is Unseemly to Sow Discord Here in the Holy Land.”

From this artistic perspective, she conceptualized the political-poetic utopia of a multi-religious, multi-ethnic society founded on mutual respect. She focuses on a community that does not follow the model of the European nation state, and especially not the ethnically homogeneous form that has prevailed since the First World War:

“One does not move between separate individuals on the slopes and corridors of Zion, but between peoples!” (Hebräerland, p. 13)

Here, “Jews and Christians, Muslims and Buddhists walk hand in hand. This means that each meets their neighbor responsibly. It is unseemly to sow discord here in the Holy Land.”

Like Martin Buber, Hugo Bergmann and Ernst Simon, whom she had already referenced in Hebräerland, Elsa Lasker-Schüler later aligned herself with the Brit Shalom (covenant of peace), which advocates the idea of a bi-national state. “She did not believe in [a] Jewish state,” noted Werner Kraft in a conversation with her. The Jews “are the ‘salt’ or the ‘cinnamon’ and they could not exist for themselves.”

Else Lasker-Schüler justified her political stance through a poetic-religious-historical concept of Jewish existence, whose diasporic character she attempted to save also in the “Land of the Hebrews.”

Unless otherwise stated, quotes in this text are from: Elsa Lasker-Schüler. Hebräerland. Zürich: 1937 (translated into English for this essay by Rachel Stanyon).