Ticket presales for "intonations" began successfully. From 6 to 11 April 2019, festival director Elena Bashkirova will once again be gathering musicians from all over the world in the Glass Courtyard at the Jewish Museum Berlin. Members of top international orchestras, young talents and renowned soloists including pianist Martin Helmchen, hornist Ben Goldscheider, and soprano Anna Samuil, will be guests at the six concerts. "This mixture of renowned musicians and up-and-coming talents is such an adventure every year. And I will be happy if we succeed in making the spark of our enthusiasm jump over to our audience" says Elena Bashkirova in anticipation of the eighth chamber music festival.

The focus of this year’s festival is "Viennese classics" from the 18th and 19th centuries. Alongside works by Wolfgang Amadeus Mozart, Johannes Brahms, and Franz Schubert, compositions by Gustav Mahler, Arnold Schönberg, Hanns Eisler, and Erich Wolfgang Korngold will also be on the program. Elena Bashkirova and Roman Trekel will open the festival with Auf dem Strom by Franz Schubert. On the second day of the festival the two will also be performing Robert Schumann’s Liederkreis. On the same day, we will hear the piano quartet Op. 60 by Johannes Brahms, a composer whose chamber music set new standards in expression, form, and sound. The festival program also includes adaptations of musical pieces that have either been transformed into a new sound form or whose composition has been taken a step further, such as Schönberg’s arrangement of Strauss’ Kaiserwalzer. And, as every year, the 2019 festival will also feature rarities – pieces by Finnish-Swedish composer Bernhard Crusell and by Vladimir Tarnopolski, one of the most important Russian composers of our time.

From Jerusalem to Berlin

The festival is supported by Evonik Industries.

The current program can be found at intonations (subject to change without notice).

Please send your interview requests with the festival director Elena Bashkirova or selected artists to presse@jmberlin.de

Pictorial material for reporting purposes, including the picture credits, can be downloaded from the Jewish Museum Berlin website from Monday, 11 March. 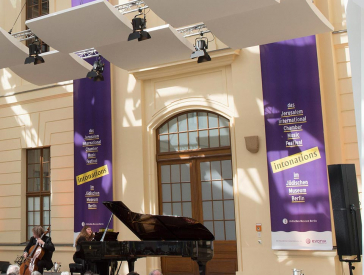 The festival headed by Elena Bashkirova has been our guest at the Jewish Museum Berlin every year since 2012.