Jews Along the Silk Road

Previously, the artworks that the Czech-Jewish artist and caricaturist Bedřich Fritta (1906–1944) created at the "Theresianstadt Ghetto" concentration camp from 1942 to 1944 have been regarded mainly as historical documents. In contrast, this exhibition focused on the artistic methods by which Fritta's drawings interpret and comment on day-to-day life in the camp. It explored the diversity of his visual language and the artistic quality of his drawings.

On December 4, 1941, Fritta was deported to Theresienstadt, where the SS guards at the camp assigned him to supervise the drawing studio of the "Jewish self-administration." There, as many as twenty artists detained in Theresienstadt were made to produce propaganda to reinforce the camp's public image as a smoothly functioning "ghetto."

Secretly, the artists also recorded everyday ghetto life. In October 1944, Fritta was deported to Auschwitz, where he died of an illness shortly thereafter.

The majority of his unofficial works, numbering more than one hundred, survived in hiding and later passed into the hands of his son Tomáš Fritta-Haas (1944–2015). This exhibition publicly presented the assemblage of large ink drawings and smaller sketches in its full scope for the first time ever.

You can still view many of the drawings that were exhibited on the exhibition's website (www.jmberlin.de/fritta/en/).

The Wikipedia article about "kapos," or "prisoner functionaries," explains how SS concentration camp staff used prisoners for the organization of everyday life in the camps. 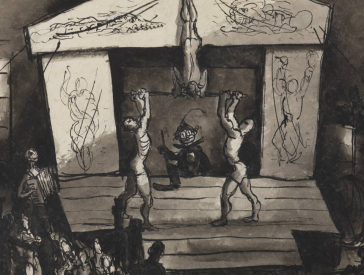 In four lectures, the symposium explores the history of Theresienstadt, the “ghetto of exceptions,” from four different angles.

Cultural Trip to Prague and Terezín

31 January – 2 February 2014
To go along with the performance of the Verdi Requiem, staged as a dramatic concert titled Defiant Requiem, we are organizing a study trip to Prague and Theresienstadt.

2 March 2014, 11 am – 6 pm
In four lectures, the symposium explores the history of Theresienstadt, the “ghetto of exceptions,” from four different angles.

3 March 2014, 7:30 pm
The documentary film tells the story of the Czech conductor and pianist Rafael Schächter and his performance of the Verdi Requiem in Theresienstadt.

The dramatic concert Defiant Requiem is dedicated to the Czech conductor and pianist Rafael Schächter, who performed the Verdi Requiem with hundreds of Theresienstadt Ghetto prisoners approximately seventy years ago.