The building zigzags with its titanium-zinc façade and features underground axes, angled walls, and bare concrete “voids” without heat or air-conditioning. With his “Between the Lines” design, American architect Daniel Libeskind did not want simply to design a museum building, but to recount German-Jewish history. Even before the Jewish Museum Berlin opened in the fall of 2001, almost 350,000 people had toured the empty building, which continues to fascinate innumerable guests from Germany and abroad. Today the Libeskind building houses the permanent exhibition. The building allows for many interpretations. For some people it brings to mind a broken Star of David; for others it is a bolt of lightning. Many people are left with a feeling of insecurity or disorientation.

“Between the Lines”: Daniel Libeskind and His Design Plans

Architect Daniel Libeskind’s “Between the Lines” design won the competition in 1989 for the “Extension of the Berlin Museum with a Jewish Museum Department.” It was the first time that one of his designs was actually built.

“The official name of the project is ‘Jewish Museum’ but I have named it ‘Between the Lines’ because for me it is about two lines of thinking, organization, and relationship.” —Daniel Libeskind

The Libeskind building is outwardly freestanding and independent. To reach the permanent exhibition, visitors must walk through an underground passageway from the entry area in the adjacent baroque Old Building. Daniel Libeskind designed the floor plan based on two lines: the building’s visible zigzagging line and an invisible straight line. At the points where the two lines intersect are the “voids,” empty spaces that cut through the building from the basement to the roof. The crisscrossing, oblique slashes of windows appear unsystematic and make it impossible to distinguish the individual floors from outside.

Libeskind mentions four different sources of inspiration for his design. Prominent Jewish and non-Jewish Berliners such as Paul Celan, Max Liebermann, Heinrich von Kleist, Rahel Varnhagen, and Friedrich Hegel stand for the connections between Jewish tradition and German culture prior to the Shoah. Libeskind plotted their addresses on a map, and a network of lines emerged from which he developed the structure of the building and the windows. Other ideas came from composer Arnold Schönberg’s unfinished opera Moses and Aaron, from the German Federal Archive’s The Memorial Book for the Victims of the Nazi Persecution of Jews in Germany (1933–1945), and from the essay “One-Way Street,” by Walter Benjamin.

Only one scene survives from the never-completed third act of this twelve-tone opera. In the scene, Moses accuses his brother Aaron of falsifying God’s thoughts with images and miracles.
More on Wikipedia

This short prose piece is by the philosopher and cultural critic Walter Benjamin. He was born in Berlin’s Charlottenburg district in 1892 and took his own life in 1940 in the Spanish border town of Portbou, fearing that he would be handed over to the Germans.
More about Walter Benjamin on Wikipedia 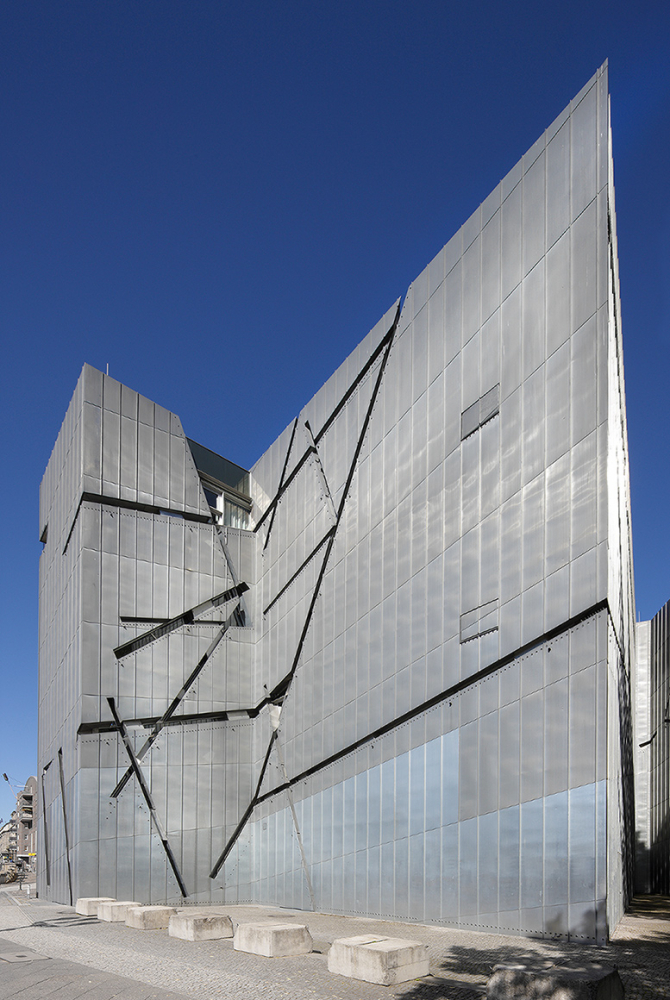 The Libeskind building’s titanium-zinc façade makes it impossible to see where each floor begins from the outside. Photo: Jen 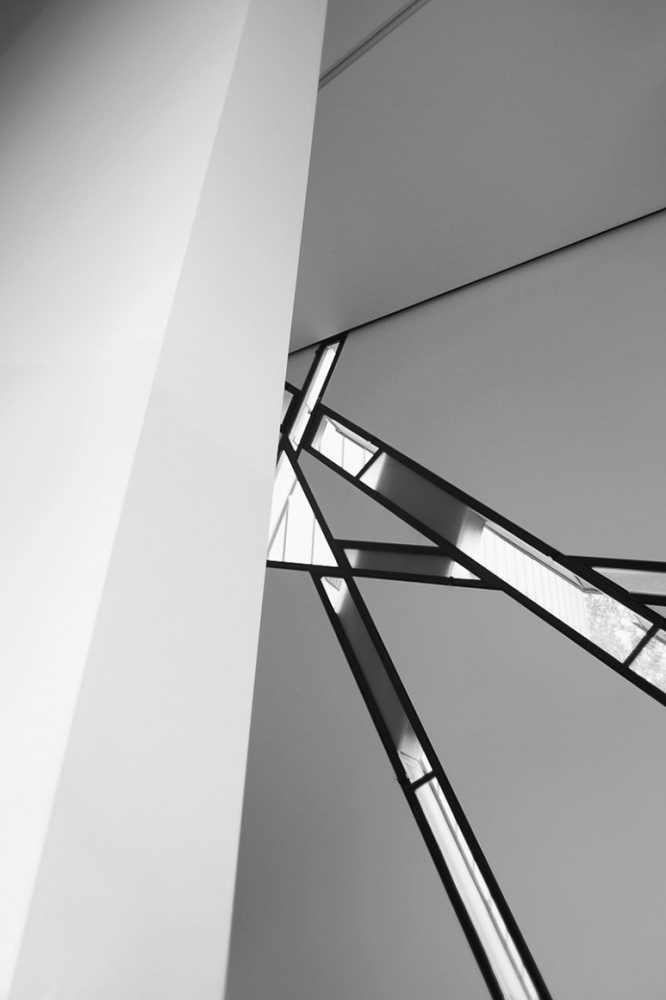 The Libeskind building’s titanium-zinc façade makes it impossible to see where each floor begins from the outside, photo: Jens Ziehe 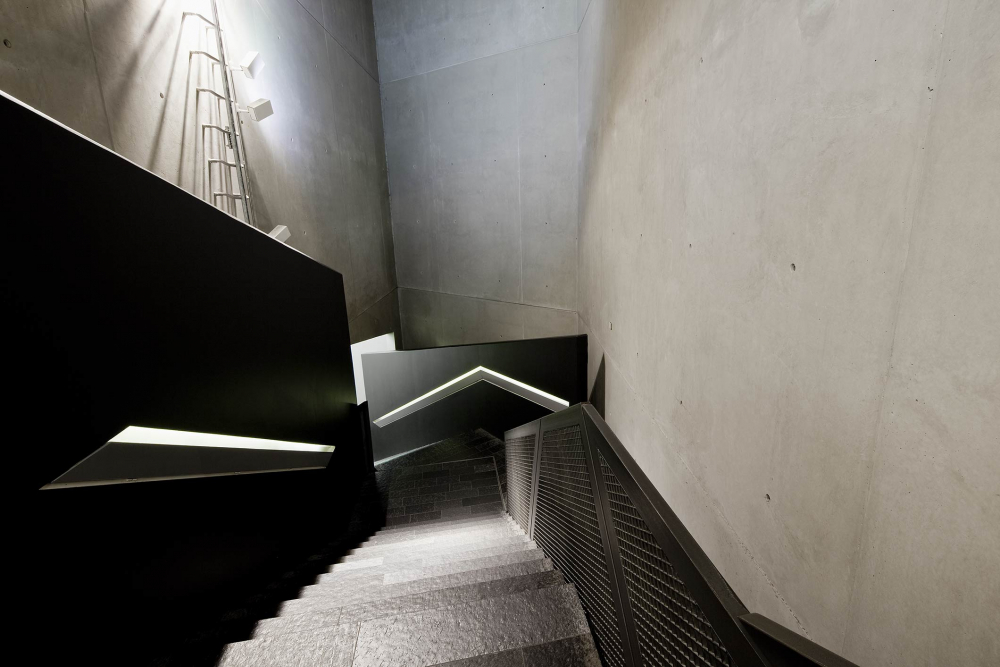 This staircase is the only way from the Old Building to the Libeskind Building, photo: Thomas Bruns

The voids cut through the entire vertical axis of the building. The concrete shafts are neither heated nor air-conditioned and largely lack artificial lighting. Only some of them can be accessed. In the upper floors of the exhibition space, the voids are clearly discernible from the void bridges, whose walls are painted black. One of the five voids contains the Shalekhet (Fallen Leaves) installation by Israeli artist Menashe Kadishman (further information on the installation is available on our website).

Daniel Libeskind uses the voids to address the physical emptiness that resulted from the expulsion, destruction, and annihilation of Jewish life in the Shoah, which cannot be refilled after the fact. He wanted to make this loss visible and tangible through architecture. 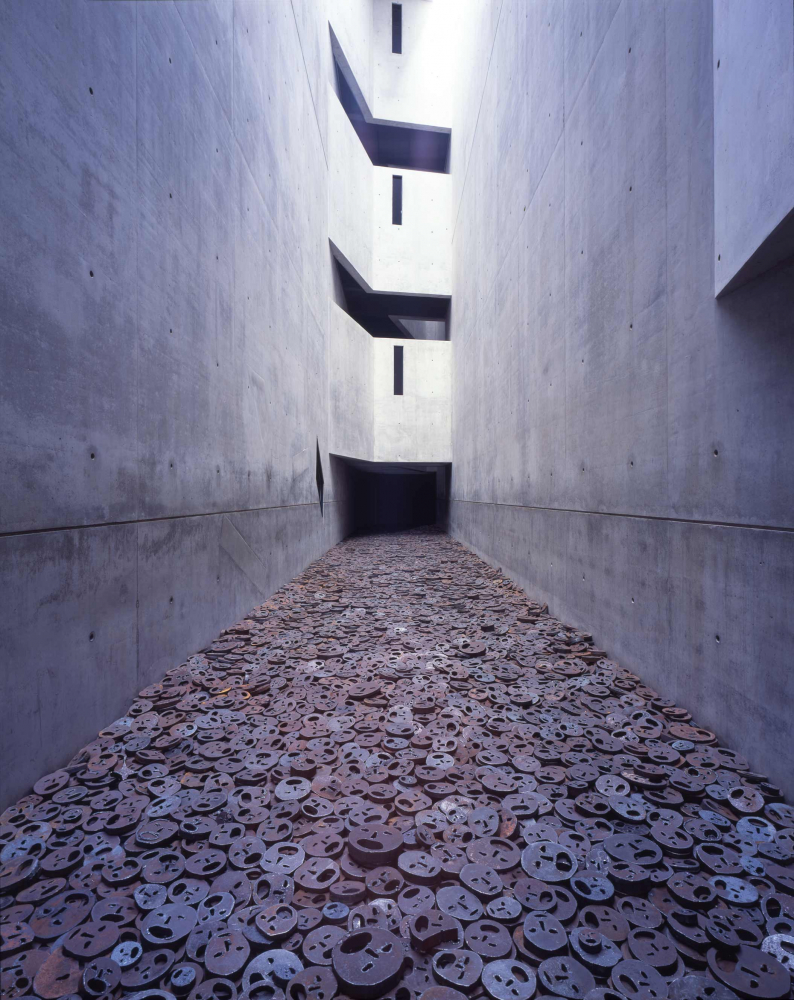 The Axes on the Lower Level

Three axes cross on the lower level of the Libeskind building, symbolizing three historical developments of Jewish life in Germany: the Axis of Exile, the Axis of the Holocaust, and the Axis of Continuity.

Along these axes, we display objects that tell the stories of Jews who were persecuted and murdered during the time of National Socialism or had to emigrate. The most prominent display case at the beginning of the Axis of Exile probes the conservation history of objects during the Nazi era: mementos are preserved because families took them along when they emigrated. Things that had been stolen were rediscovered piece by piece after the end of the war and restored to their owners. And so the JMB collection is closely connected to the catastrophe of the Holocaust.

The Rafael Roth Gallery is located at the intersection of the three axes. Since 2020, it has housed the video installation Drummerrsss by the Israeli artist Gilad Ratman.

The Axis of Continuity ends in a steep staircase, with a light projection cast onto its upper end. Via its 82 stairs, visitors reach the entrance to the core exhibition on the 2nd floor. 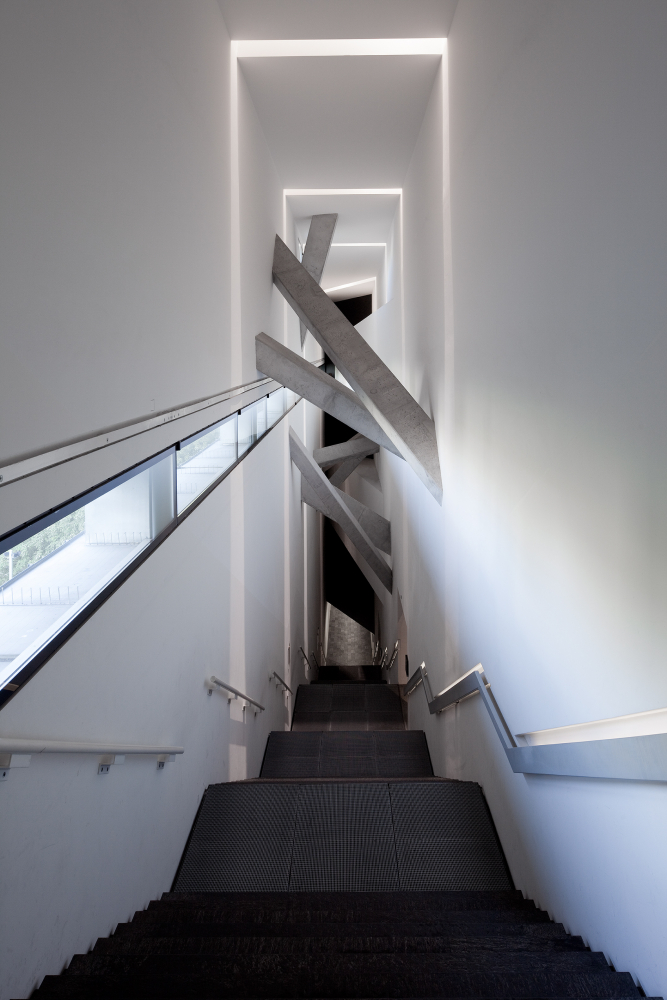 The Axis of the Holocaust ends in the “Voided Void,” or Holocaust Tower, an isolated building splinter whose sole connection to the Libeskind building is underground. Daylight penetrates the tower only through a narrow slit in the unheated concrete silo and any exterior sounds are heavily muffled by the walls. Many visitors experience a feeling of oppression or anxiety inside the Holocaust Tower.

The Axes and the Holocaust Tower 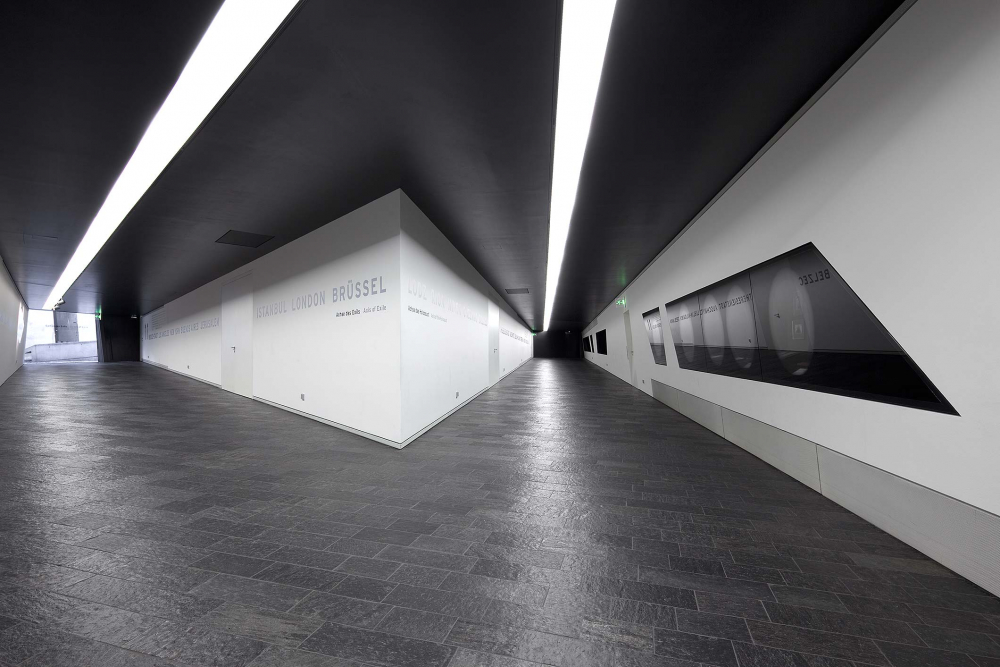 The Axis of Exile and the Axis of the Holocaust in the Libeskind Building Basement, photo: Thomas Bruns 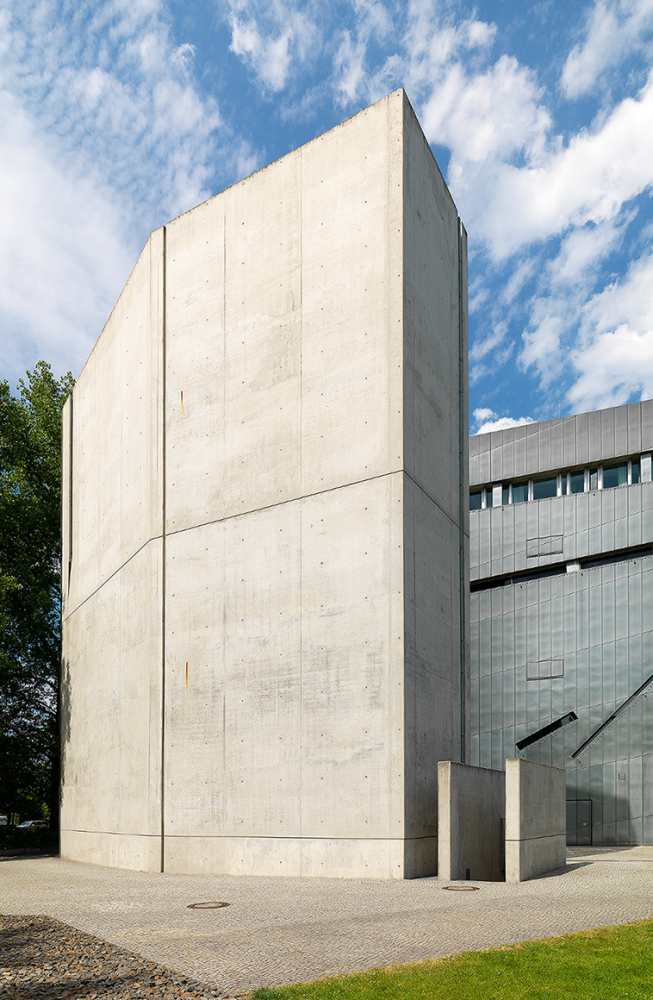 The “Holocaust Tower” is an isolated structure whose sole connection to the Libeskind Building is underground, photo: Jens Ziehe 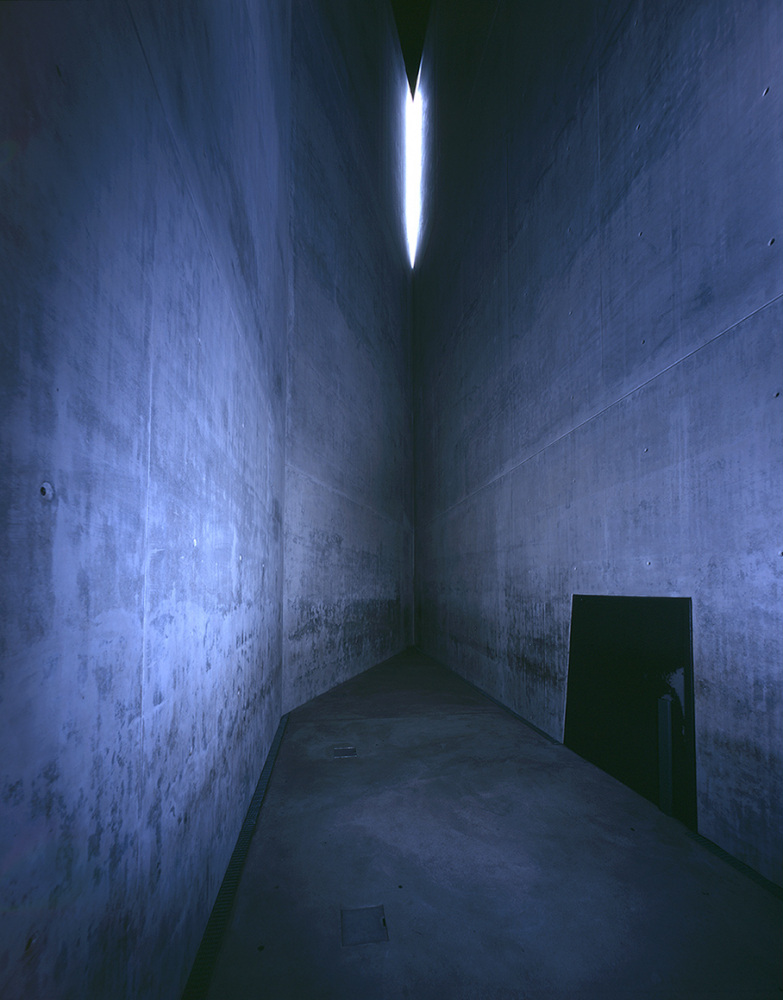 The Garden of Exile

The Axis of Exile leads to the Garden of Exile, which is located outside the Libeskind building. Forty-nine concrete stelae are laid out in a 7-by-7 square on slanting ground. The Russian olive bushes growing atop the stelae are a symbol of hope. Forty-eight are filled with soil from Berlin and the forty-ninth, at the center, with soil from Jerusalem.

The slanting ground of the Garden of Exile gives visitors a dizzying feeling of unsteadiness and disorientation. The only vegetation is located high out of reach. Libeskind wanted this spatial experience to recall the lack of orientation and instability felt by the émigrés forced out of Germany.

Views of the Garden of Exile 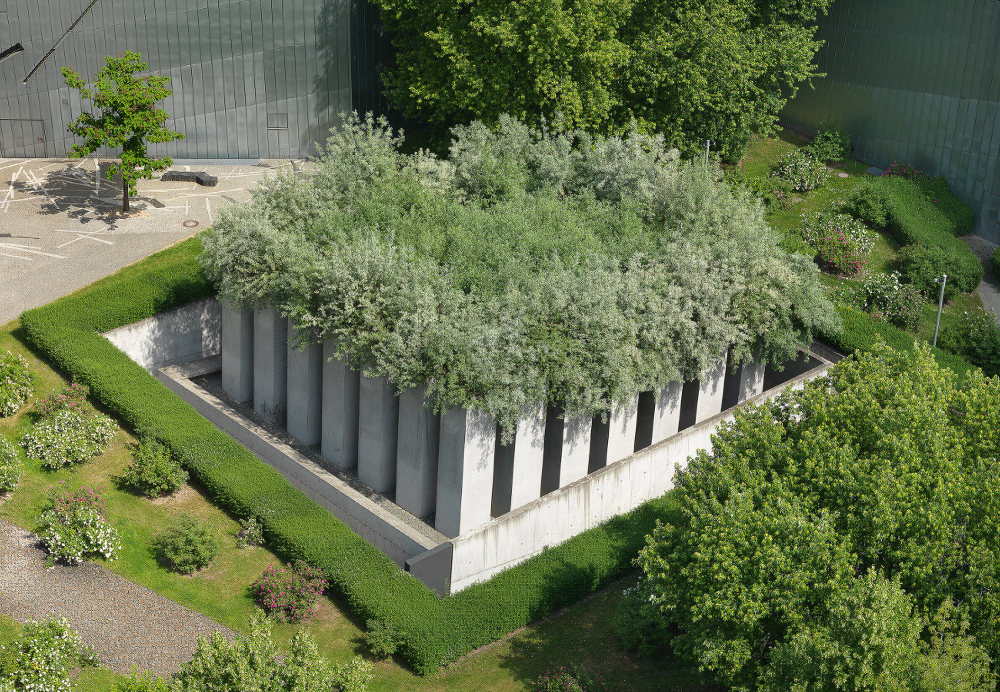 Forty-nine concrete stelae are laid out in a 7-by-7 square on slanting ground, photo: Jens Ziehe 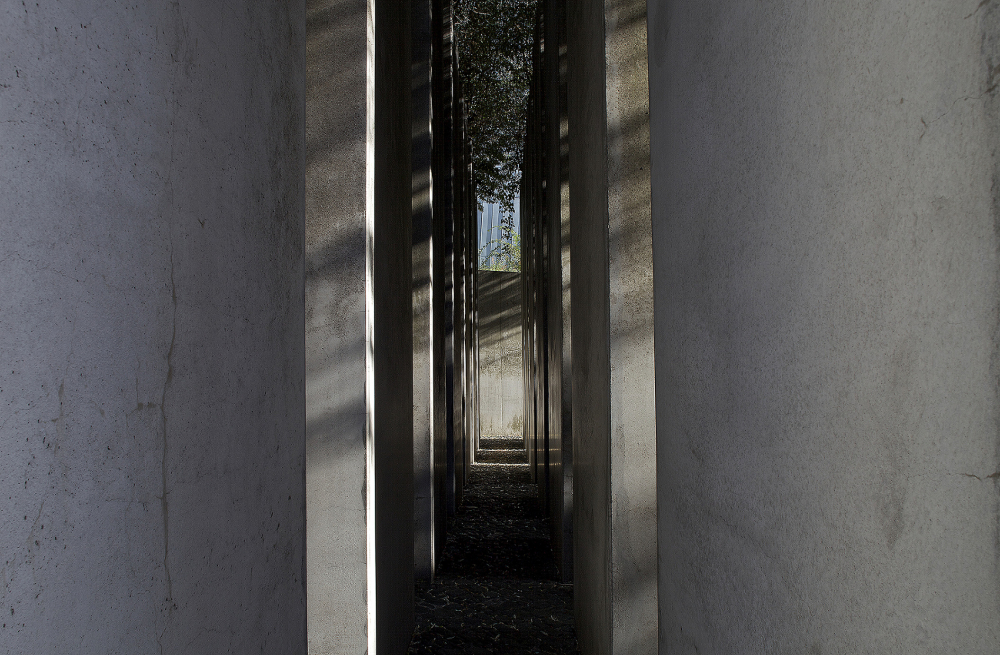 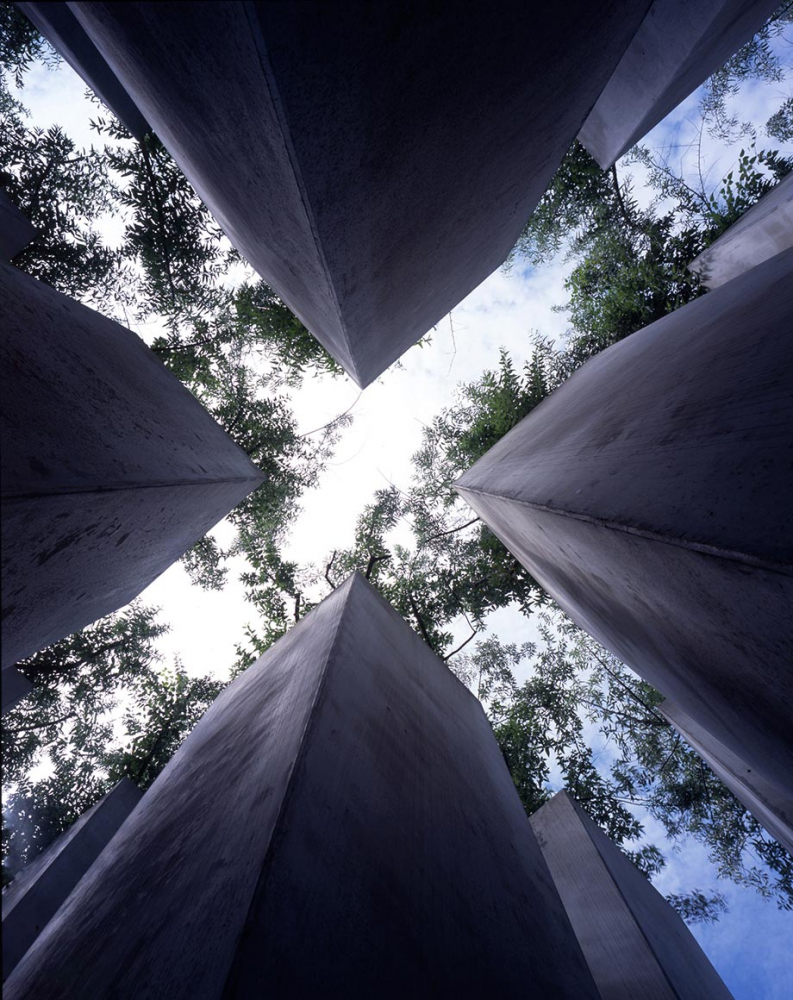 Oleaster plants, a symbol of hope, grow out of the stelae, photo: Jens Ziehe

Our Buildings: Daniel Libeskind and the Baroque Era (5) 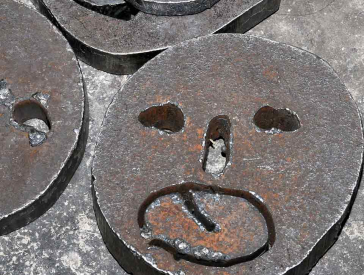