The Architecture of the W. Michael Blumenthal Academy

The W. Michael Blumenthal Academy is located on the site of the former wholesale flower market at Fromet-und-Moses-Mendelssohn-Platz, the square across the street from the museum. The building, which opened in 2012, is home to our Library with its public Reading Room, our Archive, the Klaus Mangold Auditorium, and seminar and workshop rooms where we hold educational programming for children, teenagers, and teachers. In January 2016, the Academy was renamed the W. Michael Blumenthal Academy after our museum’s founding director.

The Academy’s current opening hours are listed on our Planning your Visit page.

The former wholesale flower market was refurbished based on Libeskind’s In-Between Spaces design, financed thanks to a generous donation by Eric F. Ross. The new building ensemble of the W. Michael Blumenthal Academy is made up of three tilted cubes and two office wings that have been built into the existing structure. A Diaspora Garden (more information) has been created in the interior courtyard between the building elements. 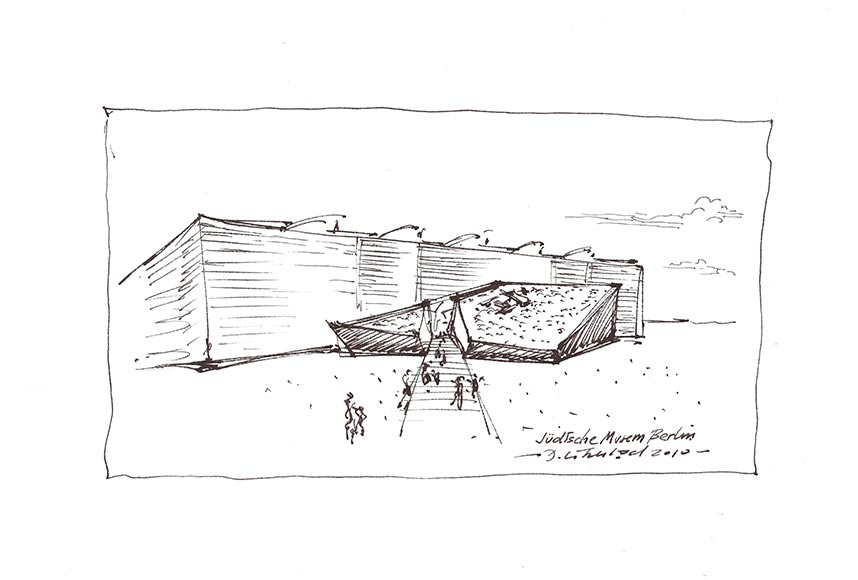 The Three Cubes of the Academy

The cubic form is a variation on a theme found in the museum’s Garden of Exile and Glass Courtyard. Daniel Libeskind thus linked the Academy to the existing museum architecture both in context and in expression of form. The first cube, which forms the entrance to the Academy, penetrates the façade of the building and creates a counterpart to our museum’s main entrance in the Collegienhaus (Old Building) and the frontage of the Libeskind Building on the opposite side of Lindenstrasse. The cube is illuminated by skylights in the form of alef and bet, the first two letters in the Hebrew alphabet, referencing the research and educational work done at this site. In the hall’s interior, the two other cubes tilted towards one another house the Klaus Mangold Auditorium and the Library with its adjacent Reading Room. 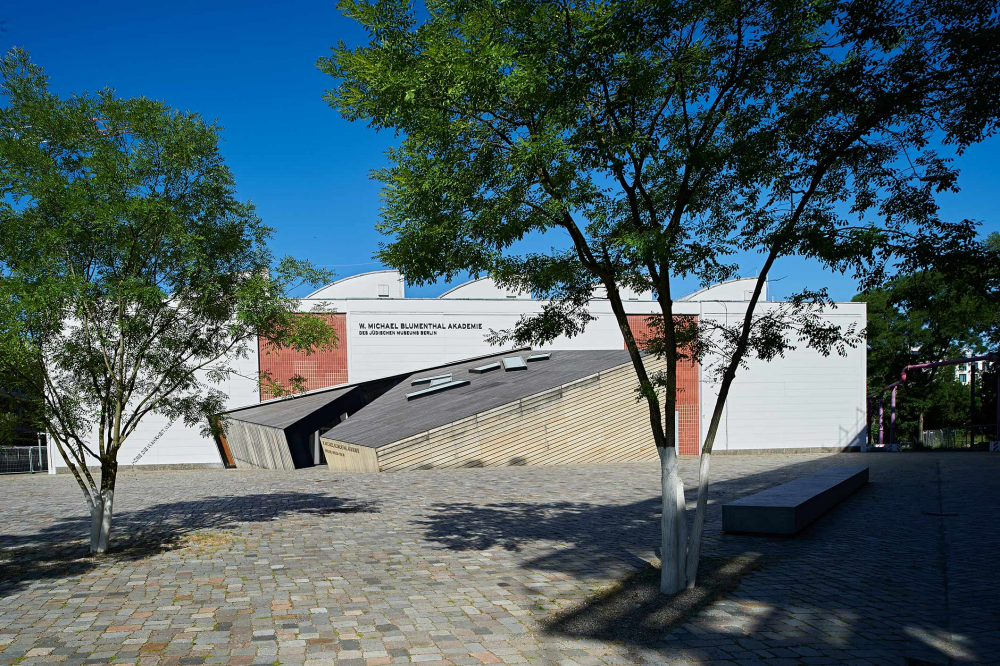 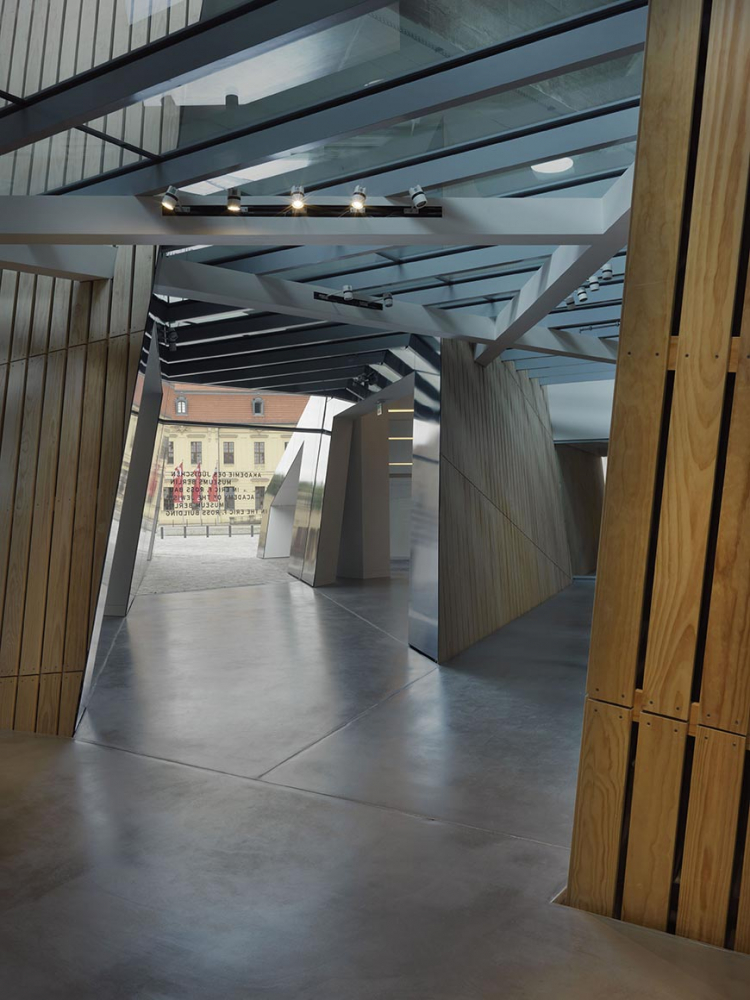 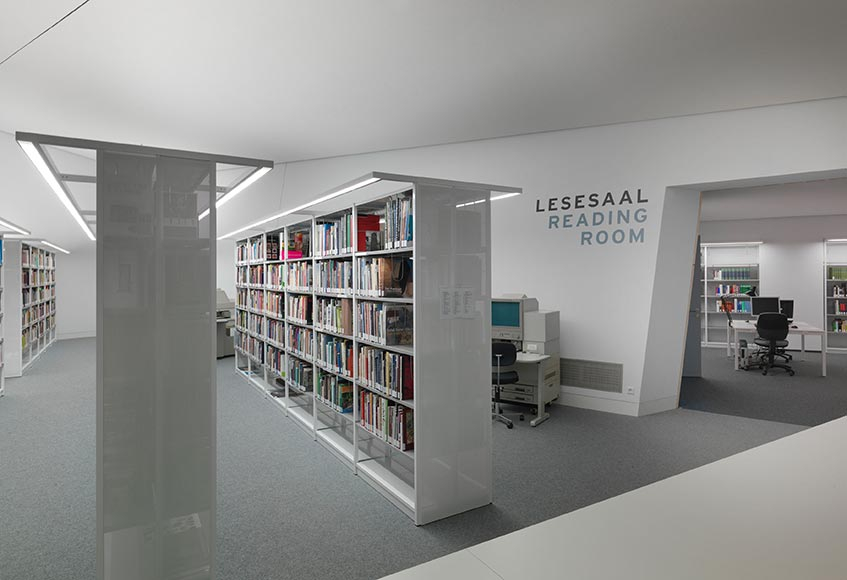 The Library’s stacks and the Reading Room are open to the public; Jewish Museum Berlin, photo: Jens Ziehe 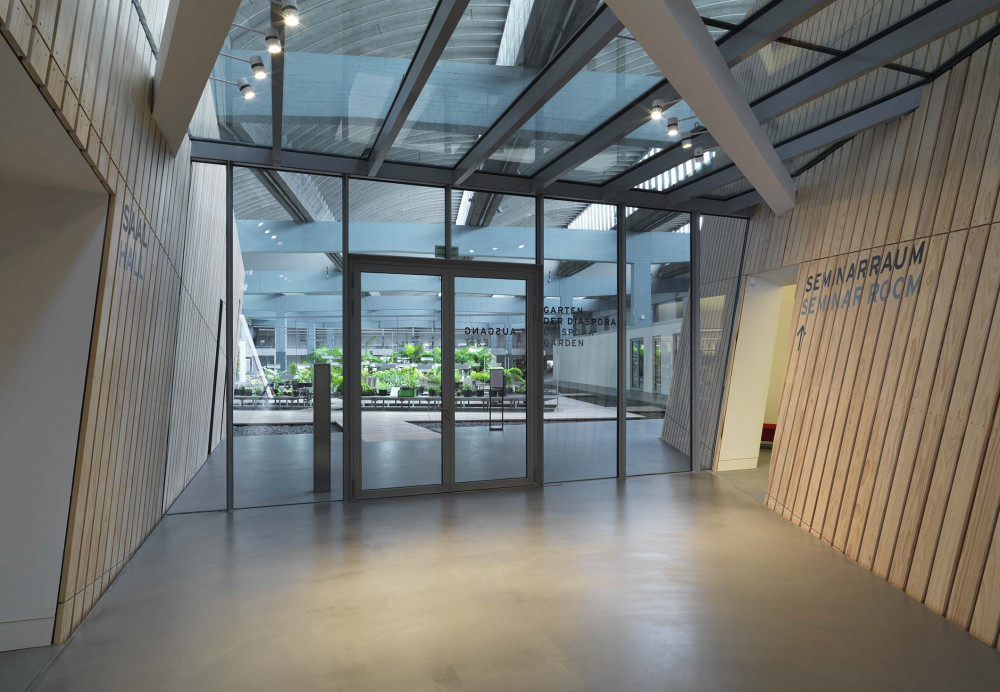 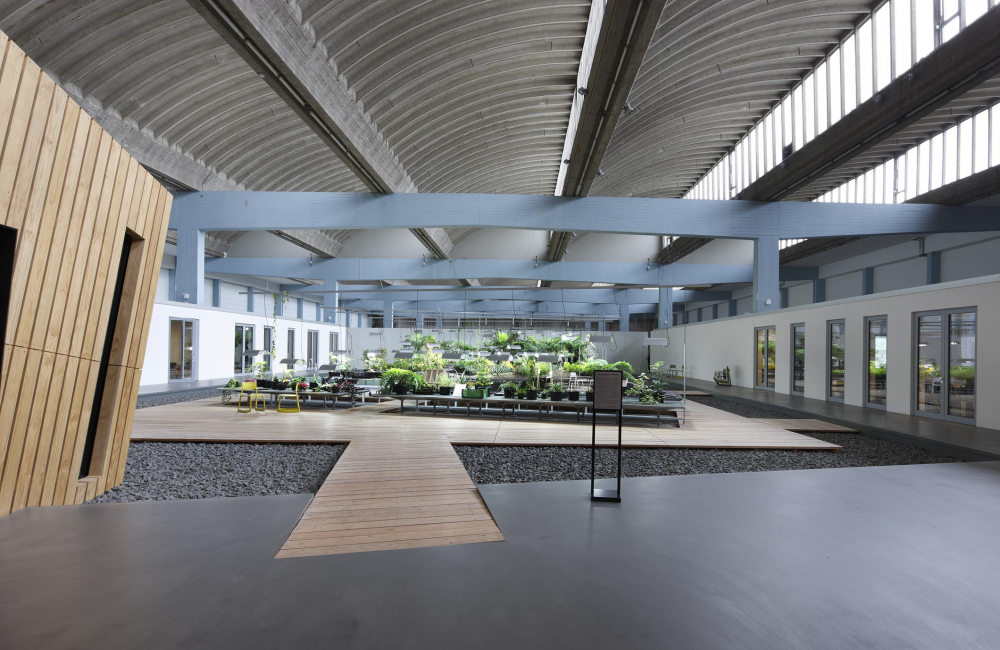 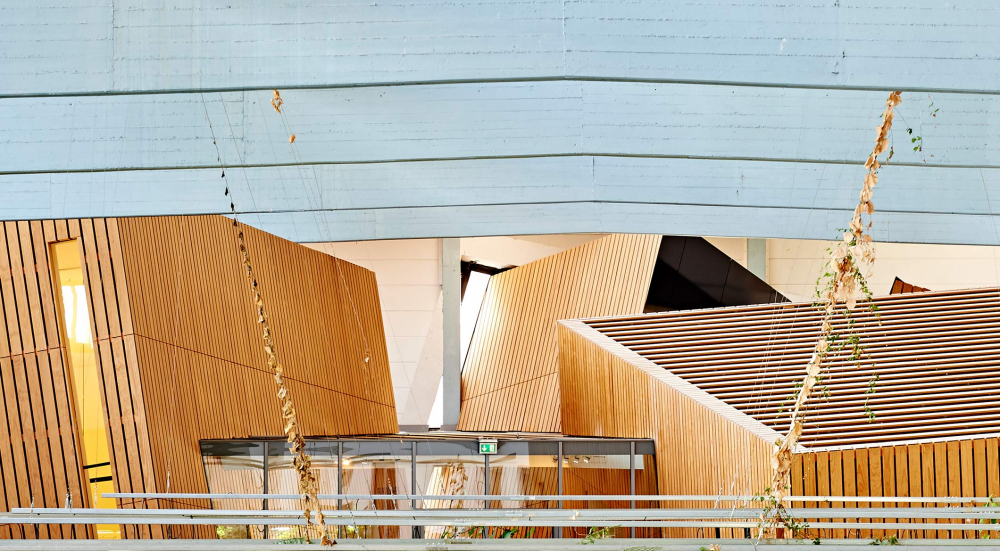 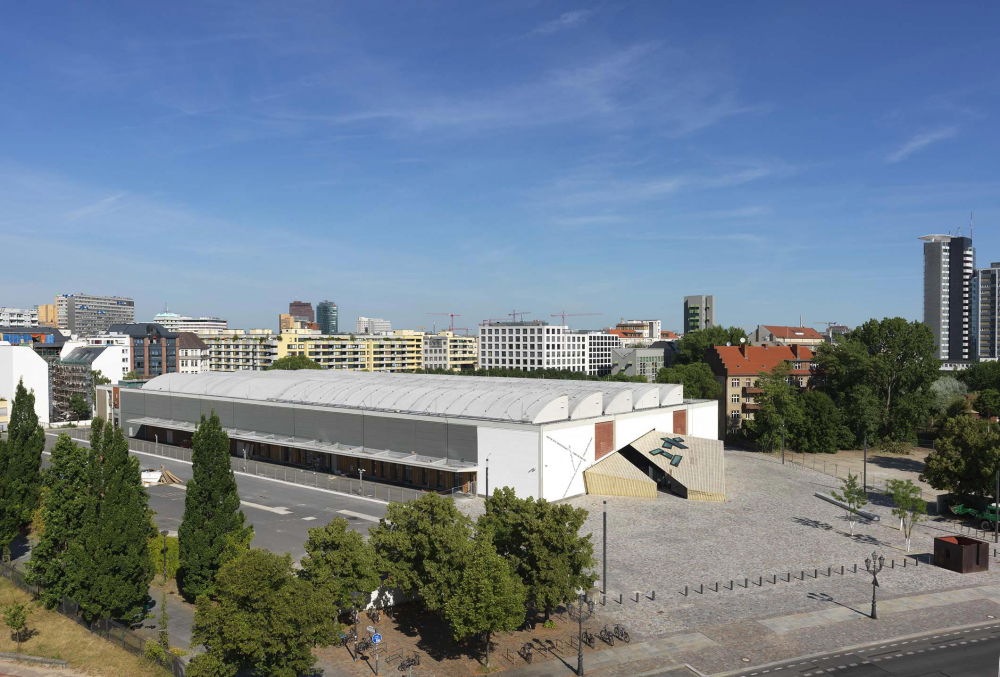 These wood-paneled cubes are intended to evoke transport crates on the one hand and Noah’s Ark on the other. The cubes symbolize the bequests that come to the Jewish Museum Berlin from around the world, which are kept in the Academy to make them accessible to a wider public. Between the three tilted cubes, an inspirational space emerges that allows multifarious views both into the interior and outside onto Fromet-und-Moses-Mendelssohn-Platz. These In-Between Spaces visually link the Academy to the Collegienhaus with its Glass Courtyard and the Libeskind building.

Together with its neighbors such as the taz newspaper’s new office, the Integrative Construction Project IBeB, and the Metropolenhaus, our Academy is located within the “Zone on the Site of the Former Wholesale Flower Market” in Berlin’s Kreuzberg district. The new microneighborhood was distinguished with both the 2021 Berlin Award, which honors exceptional urbanism and Berlin identity, and the 2020 Urban Design Award (Städtebaupreis) as an example of a co-creative urban development project that centers a blend of residential and commercial uses. Integrated into a sequence of public squares and green spaces, the southern Friedrichstadt area boasts apartments, studios, offices and other businesses, co-working spaces, workshops, conference rooms, event venues, retail stores, and restaurants.

Learn more on the Berliner Senate website (in German)

Learn more on staedtebaupreis.de (in German)

In 2021, we opened our ANOHA Children’s World, catering to young visitors in preschool and elementary school, in the rear section of the former wholesale flower market. ANOHA has its own separate entrance. 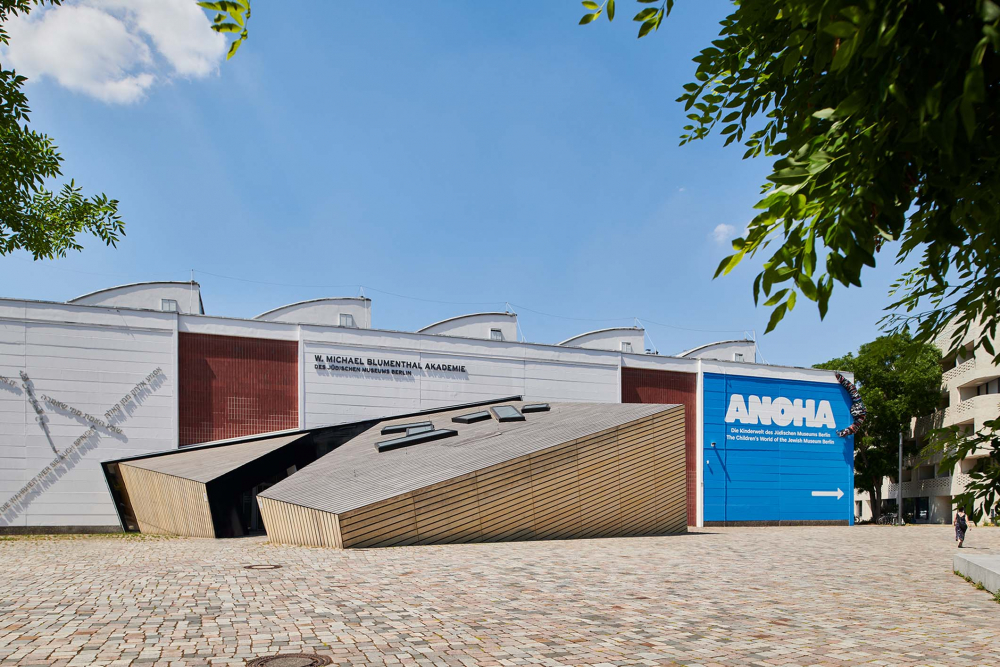 Our Buildings: Daniel Libeskind and the Baroque Era (6)