More Than Just the Entrance to the Libeskind Building

The former Collegienhaus is the last extant baroque palace in the historic Friedrichstadt neighborhood of Berlin. It presently serves as the entrance to the Jewish Museum Berlin. In addition to the ticket counter, cloakroom, and visitor information desk, the Old Building also houses exhibition space for the museum’s special exhibitions, rooms for other events, the museum shop, and the museum café.

Built in 1735, the building first served as the Collegienhaus (Supreme Court building) for the Royal Court of Justice. The Superior Court of Justice for the Kurmark Brandenburg region initially occupied several rooms and in 1879 took over the entire building. It was the first large administrative building erected during the reign of Friedrich Wilhelm I (1713–1740). It was designed by Philipp Gerlach, also well known as the architect of the Garrison Church in Potsdam.

The Collegienhaus was extended with annexes and the interior was redesigned for the first time in the nineteenth century. In 1913, the court moved into a new, larger building at Kleistpark in Berlin’s Schöneberg district. The Collegienhaus was then used by the Protestant Consistory in Berlin. After the building was almost completely destroyed during the Second World War, it was rebuilt from 1963 to 1969 under the direction of architect Günter Hönow to house the Berlin Museum, devoted to the history of Berlin. The third remodeling of the building began thirty years later, in 1993, this time supervised by Daniel Libeskind.

The Kammergericht (Superior Court of Justice) is the highest state court and the Oberlandesgericht (higher court) of the City of Berlin. Its first recorded mention was in 1468, which makes it the oldest operating court in Germany.
More on Wikipedia

Frederick William I of Prussia

Frederick William I (1688–1740) was the King of Prussia and Elector of Brandenburg from 1713 until his death. He is also known as the “soldier-king.”
More on Wikipedia 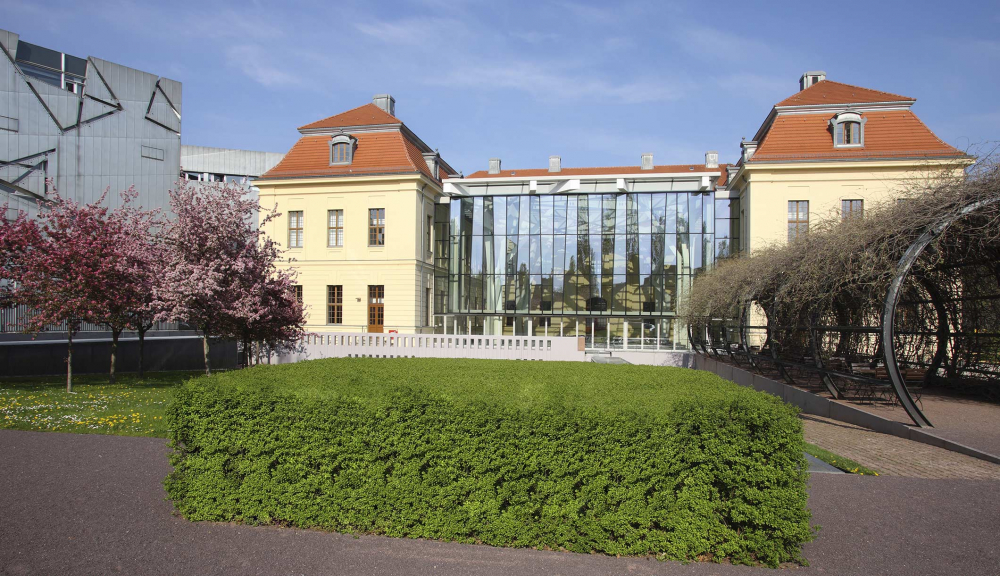 The two-story, three-winged building is built around a square courtyard over which a glass roof, also designed by Daniel Libeskind, was added in 2007. The main façade of the Old Building has a central projection. The triangular gable over the portal is decorated with the Prussian national coat of arms flanked by the allegorical figures for wisdom and justice, a lasting trace of the function the building originally served.
All visitors to the Jewish Museum Berlin pass through this main portal. The baroque building’s only connection to the adjoining Libeskind building is underground via a black slate staircase.

Bibliography on the Former Collegienhaus:

Our Buildings: Daniel Libeskind and the Baroque Era (5)