On 28 November, 2021, Jews around the world will begin the eight-day celebration of Hanukkah, which commemorates the rededication of the Second Temple in Jerusalem in 164 BCE. With help from the Friends of the Jewish Museum Berlin, the institution was able to acquire a Hanukkah menorah for its collection that can be considered the first piece of modern Judaica. Artist Ludwig Yehuda Wolpert made the menorah in 1924 in Frankfurt am Main. His creation broke with the stylistic conventions that had governed Judaica until then and ushered in a change of form and style that influenced and shaped the artistic designs of generations to come. The menorah is made of patinated cast brass and stands 34 cm tall and 38 cm wide.

“Ever since opening twenty years ago, the Jewish Museum Berlin has specialized in collecting Jewish ceremonial objects from Germany dating to the late nineteenth and early twentieth century,” explained Hetty Berg, Director of the Jewish Museum Berlin. “We want to document the stylistic change that took place during this era. Only a very small number of Jewish ceremonial objects made by artists in Germany during the 1920s still exist today. Wolpert’s Hanukkah menorah is a prime example of this decisive period and Modernism’s creative awakening, and it fills a gap in the museum’s collection. This important addition also marks the twentieth anniversary of the JMB’s founding, which was celebrated this year. I’m thrilled that the Friends of the Jewish Museum Berlin made this acquisition possible.”

Michal Friedlander, Curator of the Jewish Museum Berlin, is also pleased with the collection’s new item: “It is an honor for the Jewish Museum Berlin to incorporate this menorah into its collection. From the 1890s through the 1930s, Jewish ritual objects were usually made in historicized shapes and decorated with ornamental motifs. Wolpert’s 1924 menorah was the starting point from which he subsequently spearheaded radical change in the form and style of Judaica, influencing it for generations to come.”

Before any new acquisition, the Jewish Museum Berlin checks its provenance: In this case, there are no signs or suspicions of persecution-related expropriation having occurred between the years 1933 and 1945, as the object was often mentioned in publications, with William Gross named as the owner, and there were no restitution claims. It can therefore be assumed that this object was brought to Mandatory Palestine (present-day Israel) as an emigrant possession. The date and the context for exhibiting the menorah in the Jewish Museum Berlin have yet to be decided.

Ludwig Yehuda Wolpert was born in 1900 in Hildesheim to an Orthodox Jewish family. The family originally ran a small sock and glove knitting business. Wolpert’s father, Salomon, later became a schochet (a ritual slaughterer) and served as the rabbi at a home for the elderly. At 16, Ludwig went to study sculpture at Frankfurt’s School of Applied Arts. After completing his course of study in 1920, he began to work as a sculptor.

In 1925, in hopes of earning a more secure income through the production of everyday objects, Wolpert returned to the applied arts school in Frankfurt and began a second course of study, with a particular emphasis on silversmithing. The school director at the time was Christian Dell, who had previously taught as a Master of Form at the Bauhaus school. He brought the Bauhaus’ innovative ideas and work methods to his Frankfurt position. Wolpert made the modernist style his own and subsequently focused on producing modern, functional Jewish ceremonial objects made of silver. In 1928, Karl Schwarz, the Director of the first Jewish Museum Berlin – which stood in Oranienburger Strasse until the Kristallnacht pogrom of November 1938 – commissioned Wolpert to create a series of Jewish ceremonial objects that were then displayed in the museum as well as in a traveling exhibition.

In 1935, Wolpert emigrated to Palestine, where he continued to create objects in his unique style. He also taught at the New Bezalel School until 1956, educating an entire generation of silversmiths who went on to work in a modernist style. Wolpert then moved to the United States, where he led the Tobe Pascher Workshop in New York City’s Jewish Museum. To this day, Wolpert is regarded as the “father” of contemporary Judaica objects. His pieces stand out for their simple, elegant forms, their functionality, and the beauty of their Hebrew lettering, which he incorporated into many of his later creations. Wolpert exhibited his work at the World Fairs in New York and Montreal, and he created many pieces that became known internationally, such as the bronze doors of the synagogue at John F. Kennedy Airport. He died in 1981 in New York. 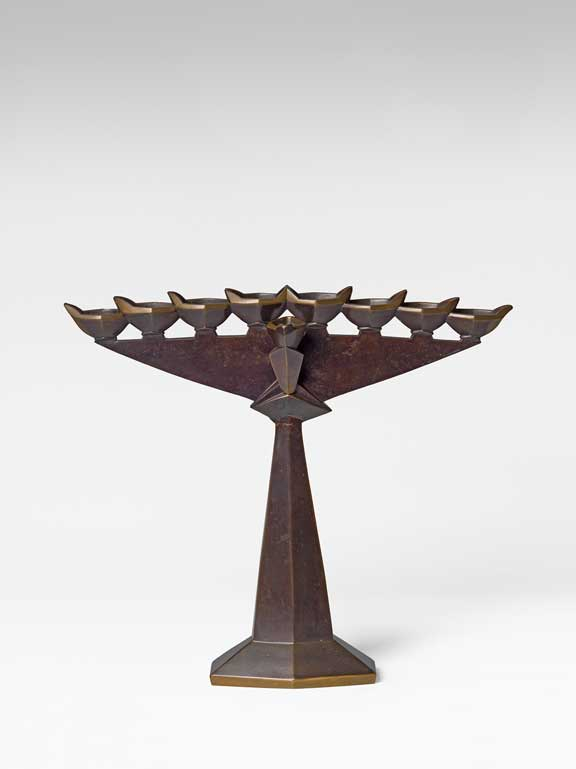 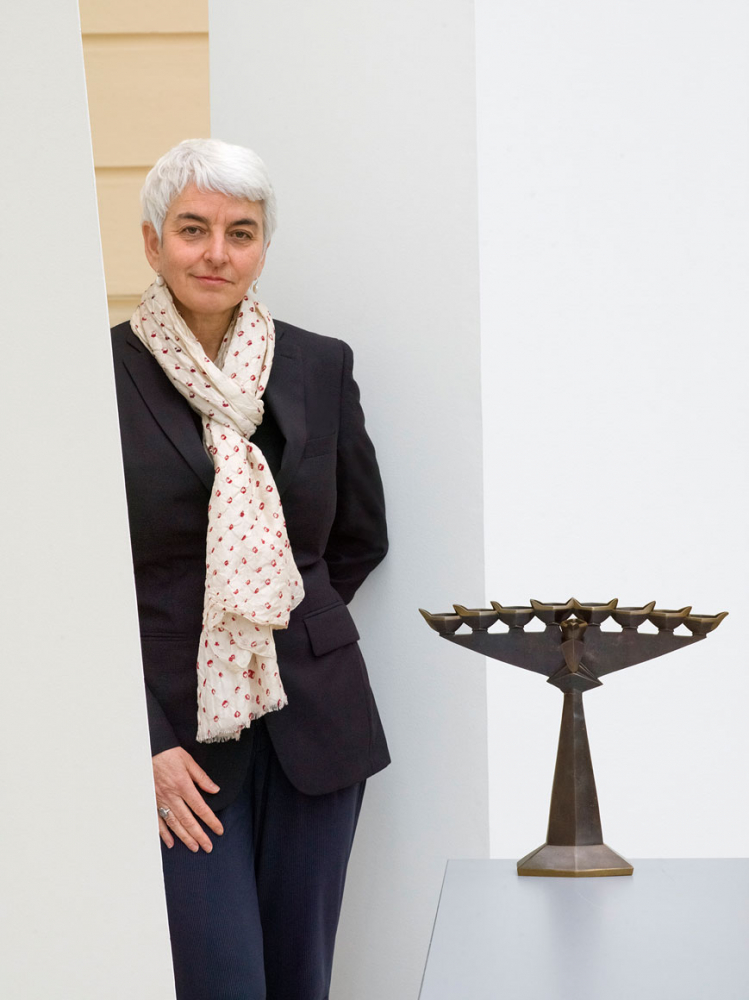 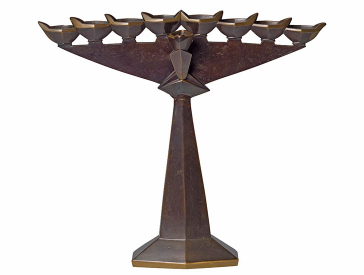 Hanukkah Menorah made by Ludwig Wolpert

One of the the first pieces of modern Judaica