A Talk about Jewish Questions, the Lives of Women, and Expectations of Literature

At the center of the latest novel by Eva Menasse, Quasikristalle (2013, ‘Quasicrystals’), is Xane Molin, an at first younger, and then progressively older woman trying to square her career with her wish to be there for her children and to live a good life. Our museum blog that existed from 2012 to 2019 in 2013 was edited by three women, all of whom were between their mid-30s and 40. They all studied literature, and they also tried to reconcile to one another their commitment to their profession, their interests, and their private lives. In each chapter Quasicrystals takes a different look at Xane Molin’s life – and the blog editors take different looks at the novel in their discussion here.

Mirjam Bitter: Since in German substantives referring to persons are not gender-neutral, I re-named our blog’s literature series from the masculine “junge jüdische Autoren,” in more gender-neutral German, to “junge jüdische Autorinnen und Autoren,” that is, “young Jewish women and men authors.” In doing that, it occurred to me that, so far, we have only talked about male authors. What do you think about introducing a woman next?

Mirjam Wenzel: I’m reading Quasicrystals at the moment, by Eva Menasse, and I’m curious what you all think about the book.

Naomi Lubrich: Well… Eva Menasse is a hot topic right now, but I don’t know how fruitful it would be to look at the Jewish aspects of Quasicrystals on our blog. In this novel, Judaism is an issue in only a few places, and there, only in reference to overcoming the past. I was surprised that the novel doesn’t feature a living Judaism, in the sense of portraying a modern congregation or the celebration of holy days. Do you think that this accurately reflects today’s way of life in German-European Judaism? 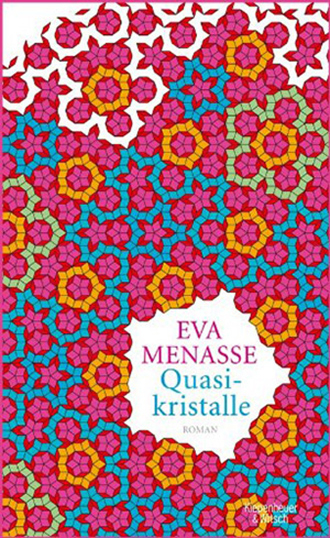 In this novel, Judaism is an issue in only a few places, and there, only in reference to overcoming the past.

Mirjam Bitter: I don’t think we have to read the novel as a paradigm for the Jewish life in German-speaking Europe. The main character Xane’s Jewishness is just one of many traits addressed by the novel. It appears that for her, the question of her Jewish identity is most of all connected to the persecution in her father’s past. That she “was henceforth considered a ‘Jewish intellectual’” on account of her investigation of her father’s history of persecution has to do with the perception of others, at that point in the novel.

At the same time, the novel is critical of a constant emphasis on dead Jews, when a hell-bent devotion to the past blinds people to the present:

“What a loss the beautiful, educated, dead Jews are! Next to them, the living are a tedious bunch.”

The book is inconsistent in this respect, paying scant attention to the myriad ways to be Jewish in today’s world. The book isn’t uninteresting from a Jewish perspective, however, and it also has some literary qualities. Eva Menasse is a perfect master of the short story form (as she demonstrated with her 2009 volume Lässliche Todsünde, ‘Venial Sins’) and here as well I found some chapters extremely successful. At times I could hardly put the book down.

The novel’s reference to Auschwitz, the iconic location of annihilation, is at once concrete and over-determinate.

Mirjam Wenzel: I can understand your criticism but at the same time I disagree: the subject of Jewish identity is actually dealt with, in particular in the second chapter – the group tour of the concentration and death camp at Auschwitz. So with reference – at once concrete and over-determinate – to the iconic location of annihilation. In this chapter, where the narrator (Bernays) declares himself as well as the main character to be a “classical case of a half-Jewish double helix,” the absent mistress Pauline also plays a central role. She appears to find Jewish congregational life quite convenient – at least, her daughter’s Bat Mitzvah is coming up. The more attracted Bernays is to Xane, the more often Pauline calls on the telephone – albeit without getting a hearing. In this sense, the novel reflects explicitly how this entanglement in the double helix is a way that the narrator avoids depicting decidedly Jewish ways of life.

All the Jewish characters portrayed in the second chapter are people whose biographies were imprinted essentially by Auschwitz. I find this to be congenial for the portrait that Eva Manasse is drawing – of native-speaking German Jews and not of Jews who happen to be in Germany and Austria. Her diagnosis thus applies to an ever-smaller circle of people within today’s Jewish communities, whose structures, development, and idiosyncrasies would otherwise go unnoticed. In contrast to you all, I like that the novel doesn’t try to represent the diversity of Jewish everyday life only because its central point of reference is a woman with a Jewish father. The book in fact evades en passant conceptual terms like ‘Jewish literature’ along with the expectations that come with it.

Naomi Lubrich: If I extrapolate your thoughts on the ‘over-determinate reference’ of the characters to Auschwitz, I don’t interpret the implications for the process of overcoming the past as only pessimistic. All the same, the examination of their Jewish identity propels both Xane and Bernays toward professional fulfillment – Xane with her political art and Bernays in academic research. It becomes the vital engine of a corresponding social discourse. Art and academia develop for both characters into a kind of makeshift congregation, with a conciliatory effect. This concept makes the book actually seem richer.
So who would like to write the review?

Mirjam Wenzel: I have to go to my next meeting. I suggest that we all think about whether we’re interested and then come to an agreement next time we meet, okay?

Naomi Lubrich: We recently talked together about Eva Menasse’s novel Quasicrystals but we haven’t decided which of us will write a review of the book for our blog. Personally I would be interested in doing it, and I have something to say not only about the Jewish theme but also about Menasse’s image of women, that I found to be unrealistically and ideationally drawn. Xane is a downright caricature of a “high-powered woman:” a caring mother and stepmother of three children with, to some extent, behavioral problems. And at the same time she’s a leading film artist and influential intellectual. On top of all this she has a harmonious, uncomplicated marriage, and she even gets involved with a number of other men… 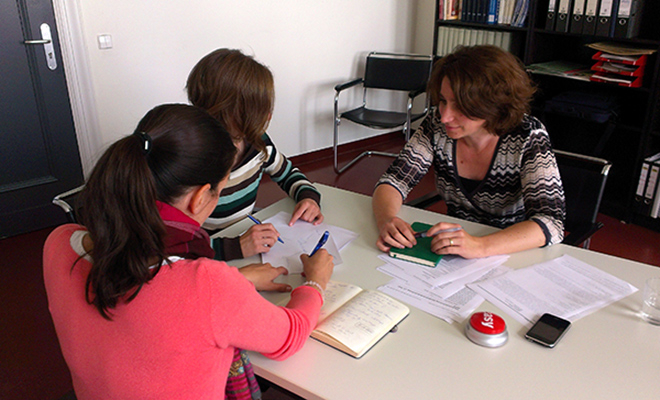 Xane is a downright caricature of a “high-powered woman.”

Mirjam Bitter: I also thought the idealization of Manasse’s heroine was a shame, especially as the novel went on. In the first chapters, the description of the main character alternates between mediocrity and mystification. It also becomes clear that statements about her are colored by whichever of the characters’ perspective the chapter was written from. But the further the text progresses, the less it fulfills the potential of its title and structure. Rather than a quasicrystal with an apparently random structure, it presents an ever clearer – crystal clear – and more idealized picture of Xane. The different narrators weigh in on Xane’s life with a variety of appraisals, of course, but those who see her negatively reveal themselves above all: the step-daughter as a pubescent monster, Xane’s employee as a man suffering primarily from hubris, and Krystyna as a resentful friend withholding help.

I also found it a pity that Xane herself suddenly narrates in the seventh chapter. It would have been more convincing to have to figure out the character entirely from the perspectives of those around her. Yet perhaps the first-person perspective was necessary in order to deal with the subject of postpartum depression and a female mid-life crisis? Perhaps the idealizing character depiction was in fact a way to take up the issue of miscarriages without having the book become maudlin? Whether it’s ideal to pick up a guy again at her age but to be at odds with her best friend, however, remains questionable.

Mirjam Wenzel: I don’t share your critical view that the character is unrealistically conceived or depicted as an ideal. I believe that this impression is created by the novel’s constitution, by the different perspectives through which the main character comes into view. Since these perspectives are based throughout – as the metaphor of the mirror underlines – on voyeuristic attributions and projections. That Xane herself begins to speak after the unsuccessful love affair – anticipating on her part the success of her friend’s love affair – presents a break in the constitution of the novel. This in turn points exactly to this nexus of narration, projection, and desire. It is just this triad by which the novel draws a line from the first to the last love and holds each chapter together at heart.

As for our review: how about simply writing down and publishing our talk on the blog? With some luck our readers will continue the discussion in the comments section.