The Soncino Society Collection at Our Library

In May 1924, Herrmann Meyer (1901-1972) and the publishers Abraham Horodisch and Moses Marx co-founded the first and only Jewish bibliophile society in Germany, the Soncino Society of Friends of the Jewish Book (Soncino-Gesellschaft der Freunde des jüdischen Buches). Our library possesses a complete collection, with 80 titles, of the publications by the Soncino Society. These stem from the estate of Hermann Meyer and were acquired in 1993.

The Soncino Society coupled Jewish tradition with modern book arts by republishing texts such as Briefe über den Talmud (Letters on the Talmud) by Jean Paul and Emanuel Osmund, translating contemporary literature such as Das Schass meines Grossvaters by Samuel Josef Agnon from the Hebrew, and commissioning Jacob Steinhardt to illustrate the apocryphal sayings of Jesus ben Sirach. For a lavish edition of the Bible, the Soncino Bible Society commissioned the font designer Marcus Behmer to develop a new Hebrew typeface.

In accordance with the statutes of 1924, the Society's publications were private editions exclusively for its members and were offered to other bibliophile societies at preferential prices. Only the magazine Soncino Blätter, published between 1925 and 1930, addressed a wider audience.

The membership, first capped at 500 and soon raised to 800, united all the currents of German Jewry. Alongside numerous prominent figures from abroad, the member lists also included Jewish fraternal organizations and renowned libraries such as the Bibliotheca Rosenthaliana in Amsterdam, the Bodleian Library in Oxford, the Hebrew National Library in Jerusalem, and the Deutsche Bücherei in Leipzig. The Honor Committee members included Leo Baeck, Max Brod, Martin Buber, Richard Beer-Hofmann, Chaim Bialik, and Hermann Struck.

The Soncino-Gesellschaft der Freunde des jüdischen Buches e.V. was a society of bibliophiles. They maintained Jewish literary culture through yearly member meetings and the publication of bibliophilic prints as well as the literary magazine Soncino-Blätter. They were founded in 1924 and dissolved during the Nazi era.
More on Wikipedia (in German)

Constitution of the Soncino Society

The last annual assembly was held in 1931. The last books, published in 1937, had been prepared for printing years earlier. Herrmann Meyer emigrated to Switzerland in 1933 and via Amsterdam to Jerusalem in 1935. 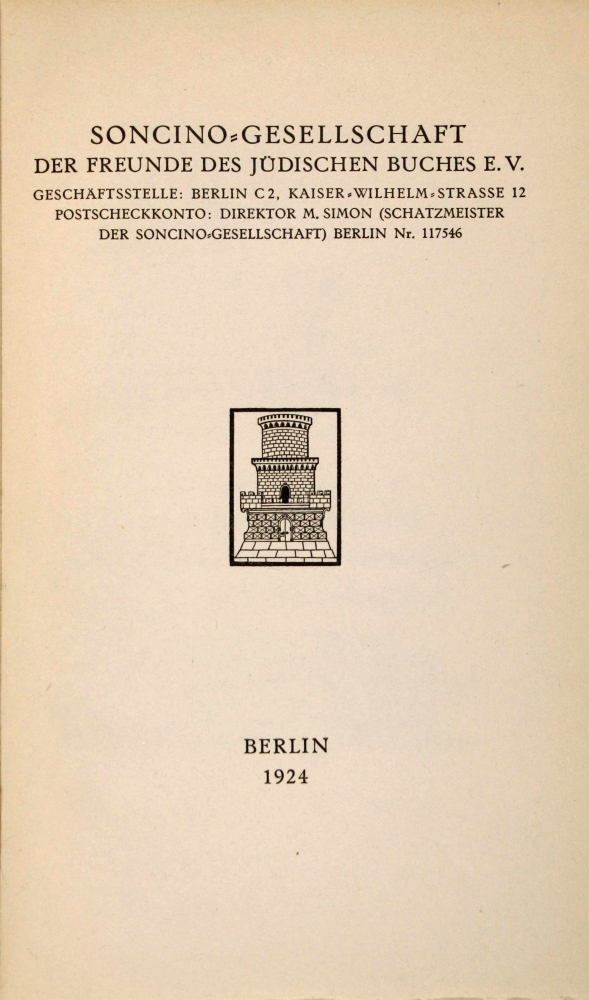 In the course of a digitization project in 2016, we digitized these collections and cataloged the related archival documents. In addition, we expanded the library database to make the digital copies available online (show publications in our OPAC). You can find out more about the project on our website. 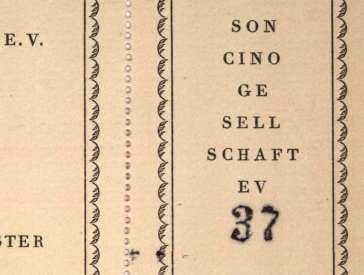 Objects from the Soncino Society