The John F. and Hertha Oppenheimer Collection at Our Library

One of the first major gifts to our library's precursor came from John F. and Hertha Oppenheimer. In 1982, the couple donated a collection of publications by the Central Association for German Citizens of Jewish Faith to the Jewish section of the Berlin Museum. In addition to other writings from the interwar period, the collection also contains numerous books published in the United States after 1945.

This cultural-historical museum about the city existed from 1962 to 1995 and was located in the Kollegienhaus at Lindenstraße 14, which today belongs to the Jewish Museum Berlin.

The Central Association of German Citizens of the Jewish Faith

The Central Association of German Citizens of the Jewish Faith was founded in 1893 and had its main office at Lindenstrasse 13 from 1905 to 1930 in the immediate vicinity of the Collegienhaus, which now belongs to the Jewish Museum Berlin.

John F. (Hans Friedrich) Oppenheimer worked as a sales manager and editor at the Central Verein-Zeitung (Central Association Newspaper) until it had to be dissolved in 1938 and Oppenheimer and his wife Hertha were able to emigrate to the USA via Holland. He is primarily known as a co-editor of the Philo-Lexikon (1935) and chief editor of the Lexikon des Judentums (1967).

The Centralverein deutscher Staatsbürger jüdischen Glaubens (en: Central Association of German Citizens of Jewish Faith) was founded in Berlin in 1893. It represented the majority of bourgeois liberal Jews in Germany and advocated for their societal equality.

To the online portal on the UB Frankfurt/Main website

The Central Association attempted to fight anti-Semitism and strengthen the German-Jewish identity through both legal efforts and publicity campaigns. For example, its brochure from 1929 entitled "Our Measures to Combat Cemetery Desecrations in Germany" lists 71 desecrations of cemeteries and 24 of synagogues between 1923 and 1928. It also documents the petition presented in 1927 by the Central Association to all German state governments calling for prosecution for this ever more frequent offense and reports on German state authorities' reactions to the petition. Furthermore, the brochure contains a detailed report on the rally "Iniquity against German Culture" of 18 October 1928, organized by the Central Association with the national government's involvement. 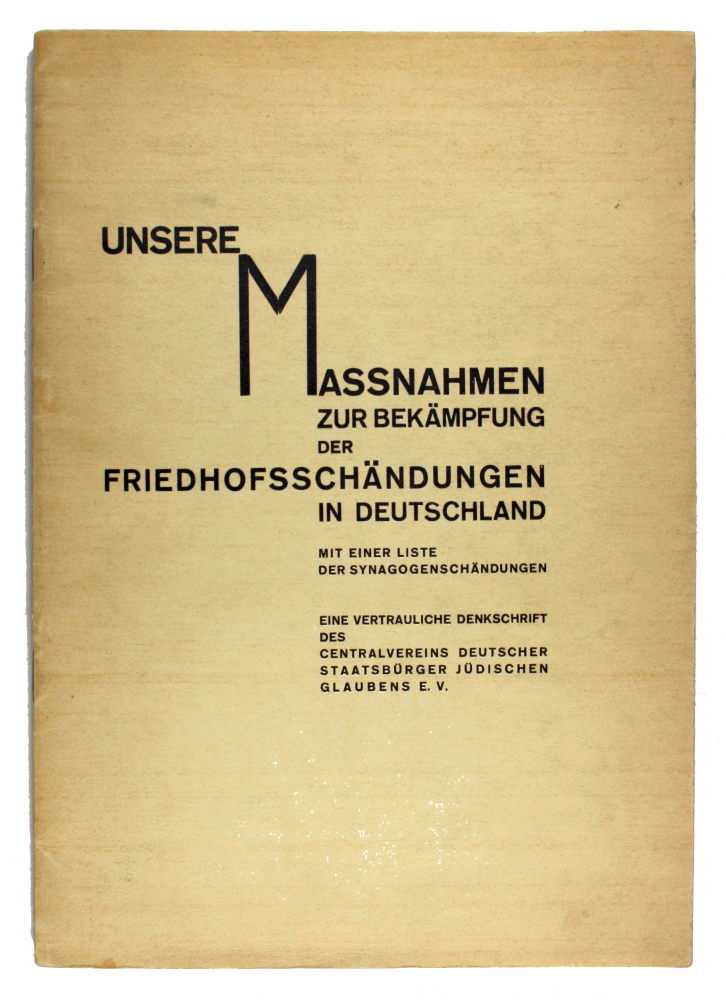 Veronika Bendt about the John F. and Hertha Oppenheimer Foundation

You can download this accompanying article (in German) by Vera Bendt as a PDF, courtesy of the author: