The terms Kristallnacht and “November Pogroms” are both designations for the violent acts against Jews that were committed primarily in the night of 9–10 November 1938 throughout the German Reich. Organized and initiated centrally by the Nazi leadership, the violence was carried out at local and regional levels by members of the SA and SS with a high level of autonomy.

Approximately 400 people were murdered or driven to commit suicide. More than 1400 synagogues and places of worship as well as about 7500 businesses and homes were destroyed. Jewish cemeteries and other Jewish community institutions were ravaged.

In the following days, the Gestapo arrested around 30,000 Jewish men and hauled them to concentration camps, where hundreds were murdered or died. Most of the surviving detainees were released again after a few weeks or months. 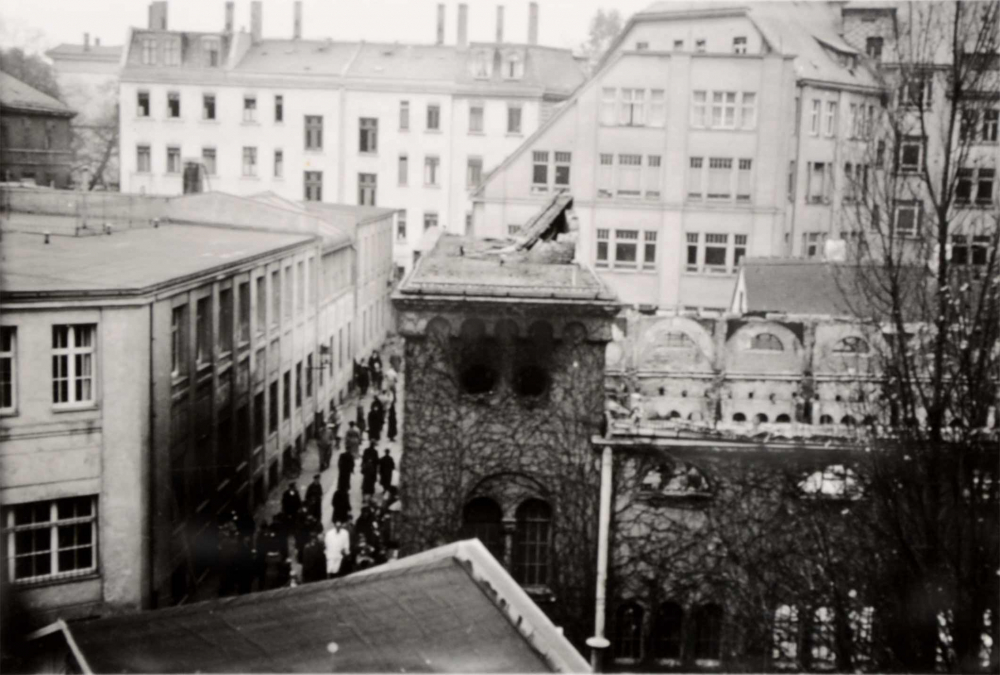 The word pogrom comes from Russian (“погром”). It emerged in the 1880s during the czarist Russian Empire to designate massacres of Jews. Literally, pogrom means “devastation” or “riot.” In Germany, the term pogrom has become a widespread designation for the events of 9–10 November 1938. However, because “pogrom” signifies an act of violence initiated by the common people, its use is in danger of hiding the state’s central role in planning and directing the violent actions of 9–10 November 1938. The term Kristallnacht (or Reichskristallnacht), meaning Night of Crystal (i.e., broken glass), as the non-Jewish majority called the acts of terror, is generally avoided in German today because it is a euphemism. It only references the physical damage, specifically broken windows and crystal chandeliers. The word “night” (the -nacht in Kristallnacht) is also misleading because the violent acts continued by the light of day. Internationally, particularly in English, Kristallnacht is an established term. From a Jewish perspective and in the memories of eyewitnesses to these events, this word is often still used to describe the events of 9 and 10 November 1938. Meanwhile, propaganda terms such as Judenaktion (Jewish Action) clearly belong to the language of the perpetrators. 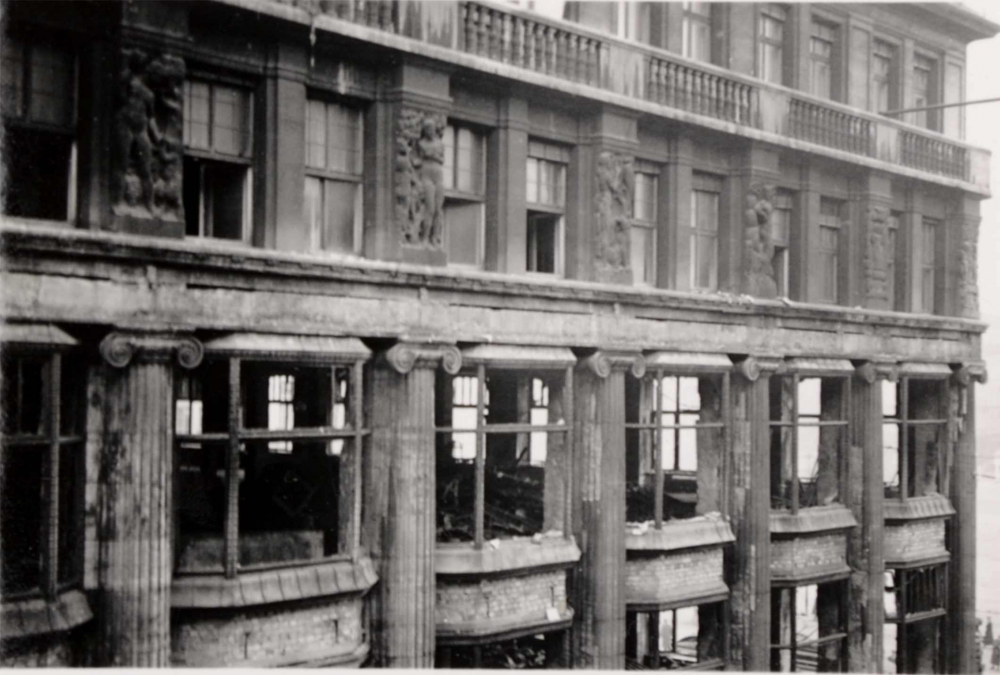 The acts of violence on 9–10 November 1938 must be seen in the context of the radicalization of antisemitism in the Nazi Germany of 1938. They were preceded by the first mass deportation of Jews from the German Reich, specifically Jews who had Polish citizenship (the Polenaktion or “Polish Action”). Beginning on 28 October 1938, around 17,000 people were violently expelled across the German/Polish border. One of them was the Grynszpan family from Hanover. Their seventeen-year-old son Herschel then attempted an assassination at the German Embassy in Paris. On 7 November 1938, he shot the diplomat Ernst vom Rath, who died of his injuries two days later. For years already, the Nazi regime had been pursuing a plan of forcibly expropriating Jews and, in particular, “Aryanizing” Jewish businesses to finance Germany’s re-armament process. The assassination provided a welcome pretext to strike out against the Jewish population with unprecedented brutality. Nazi propaganda portrayed the violence as an outbreak of “spontaneous national rage” sparked by the “cowardly murder” in Paris.

Indeed, in some regions, there were some early violent anti-Jewish riots in the late afternoon of 7 November and attacks on synagogues, homes, and businesses. On the night of 9–10 November, the regional acts of terror became a nationwide wildfire, a shift that underscores the organized nature of this state-sponsored pogrom. On 9 November 1938, the Nazi Party leadership had gathered in Munich, like every year, to commemorate the failed putsch of 1923. During the gathering, news broke of the embassy secretary’s death. Hitler spoke with Goebbels, the Minister of Propaganda, who announced the news to all the present party leaders, Gauleiters, and SA leaders and authorized them to organize “spontaneous” campaigns of “national rage” against the Jewish population – although the Party’s role as the organizer would not be publicized. Next, telegrams were sent to branch offices, agencies, and local Nazi groups throughout the country. The riots began before midnight. 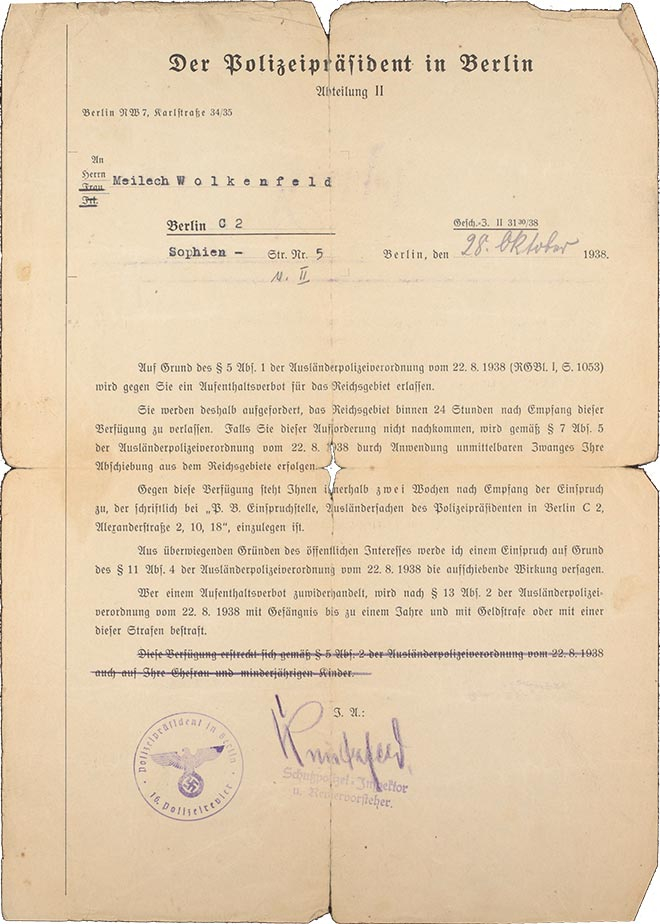 This deportation order was issued by the President of the Berlin Police and calls upon Meilech Wolkenfeld (1893–1954) to leave the territory of the German Reich within 24 hours. He was presented with the letter on 28 October 1938 in Berlin, then immediately detained and deported with many others to the Polish border; Jewish Museum Berlin, accession 2013/263/14, gift of Jack Wolkenfeld. You can find more information on this document in our online collections (in German) 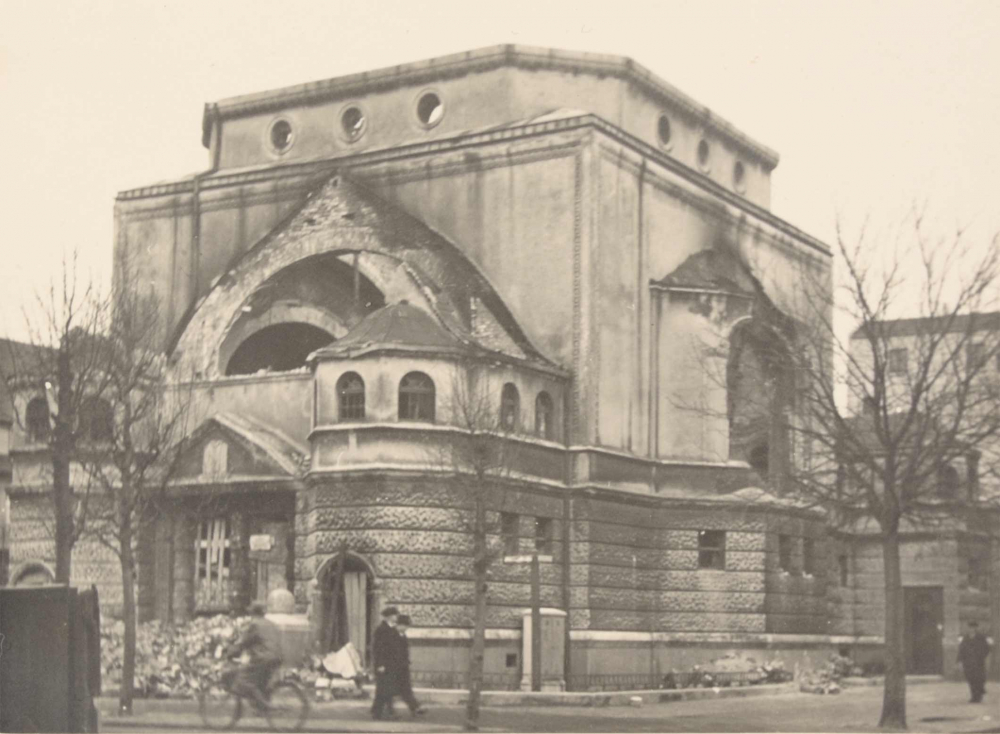 A mob of SA and SS members destroyed almost all synagogues and Jewish houses of worship in the Reich, mostly by arson. The fire departments and police simply looked on, and only intervened if a fire was in danger of spreading to neighboring buildings. The ways in which the non-Jewish majority responded to the public terror remain disputed. There were some gawkers and bystanders, but others played an active role. During the violence, businesses designated as Jewish were also destroyed and often looted. The SA and SS broke into private homes and demolished them. Jews were publicly humiliated, abused, and terrorized. The violence did not abate until the afternoon of 10 November. In some places, there were recurring riots over the next several days. Annexed Austria was an exception; there, the riots did not begin until 10 November.

During the campaign of violence, the entire German Reich saw an unprecedented wave of arrests. The SS and the Gestapo arrested 30,000 Jewish men. They were herded through the streets and eventually transported to the three concentration camps that existed at the time: Buchenwald, near Weimar; Dachau, near Munich; and Sachsenhausen, close to the German capital.

The SS at the camps vented their anger at the new detainees with particular cruelty. Hundreds of these Jews were murdered or died from the belated consequences of their detainment. Most of the surviving detainees were gradually released from December 1938 onwards provided that they made a commitment in writing to emigrate from Germany as quickly as possible and leave their assets to the state. 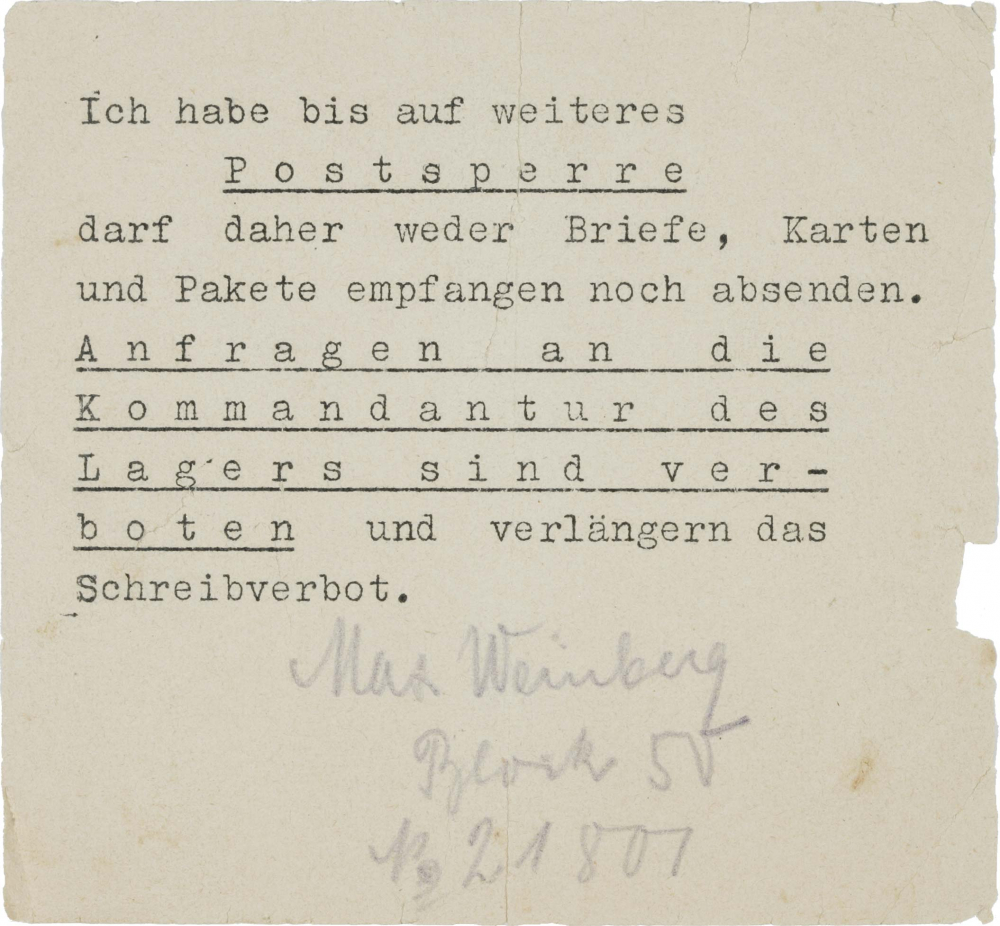 Message from Max Weinberg about his mail being blocked at the Buchenwald concentration camp; Buchenwald in Weimar, November 1938; Jewish Museum Berlin, accession 2007/17/277, gift of Erwin Weinberg. Further information on this document can be found in our online collections (in German) 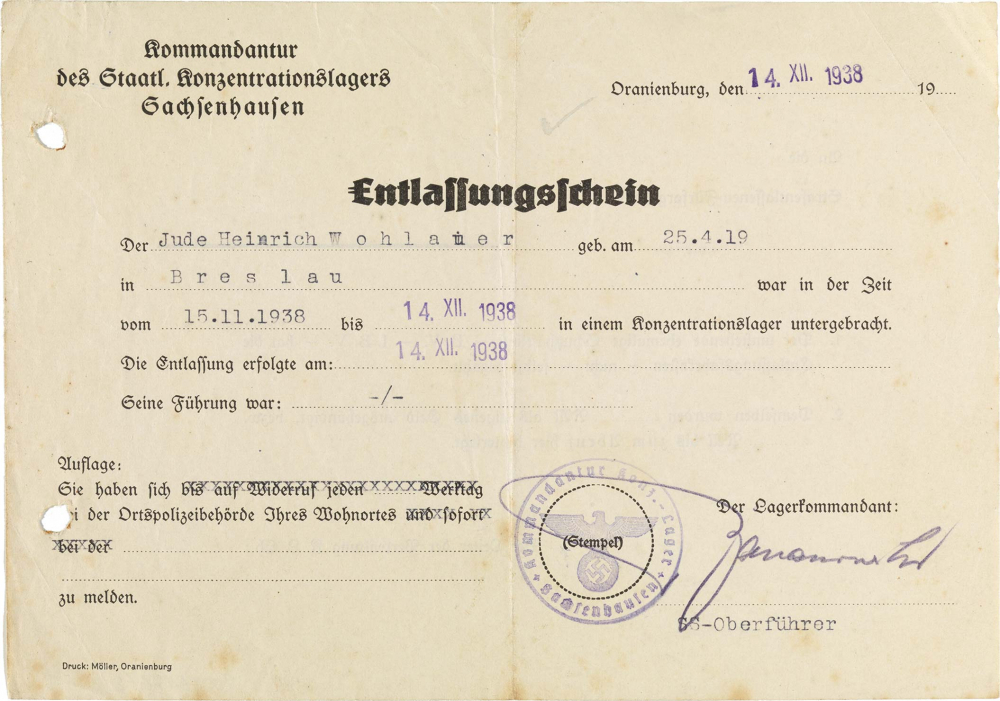 Certificate of discharge from Sachsenhausen concentration camp for Heinrich Wohlauer, Oranienburg, 14 December 1938; Jewish Museum Berlin, accession 2003/176/8, gift of Ursula Warner. Further information on this document can be found in our online collections (in German)

Victims Pay for Their Own Damage

As Commissioner for the Four-Year Plan, Göring called a meeting after Kristallnacht, which took place on 12 November 1938 in Berlin. At the meeting, it was resolved to take further state measures against members of the Jewish minority to compel them to emigrate and thus make Germany “free of Jews.” During the meeting, Göring was angry about the damage to property, which was estimated to be worth more than 225 million Reichsmarks. The attendees decided not only to fully “eliminate Jews from German economic life,” but to make the victims pay for the damage inflicted on them. The Jews were forced “collectively” to pay a “reparation” of 1 billion Reichsmarks to the German Reich. Beyond this, any insurance claims were seized. The tax authorities collected the money: any Jew who possessed more than 5,000 Reichsmarks in assets had to surrender 20 percent to the state.

9 November 1938 As a Historical Turning Point

The events of 9 November 1938 mark the transition from the discrimination against the Jewish population that had been ongoing since 1933 to their subsequent systematic persecution. For Jews living in Germany, it finally became unmistakably clear (if it was not already) that they could no longer even take their lives for granted. After 9 November 1938, the number of them who made efforts to emigrate skyrocketed. In the few months before the war broke out, around 200,000 Jews left the Reich. Although there is no straight line leading to the mass murder of the Holocaust, the acts of terror of 9–10 November 1938 mark a drastic turning point. 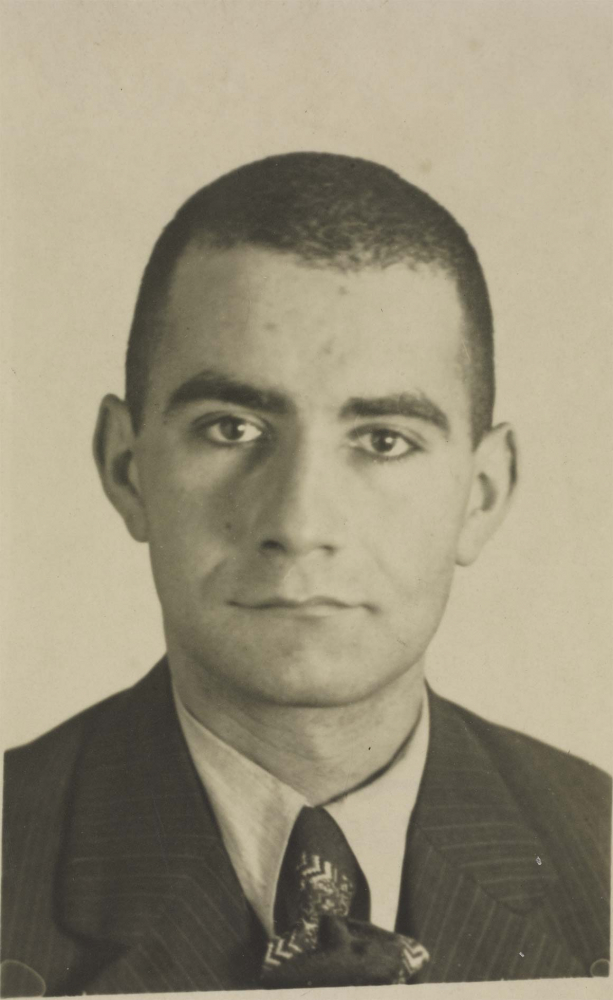 Josef Hochfeld shortly after his discharge from Sachsenhausen concentration camp, January 1939; Jewish Museum Berlin, accession 2011/245/93, gift of Frank R. Hochfeld and Hanna Renning. You can find more information on this photograph in our online collections (in German)

Documents in Our Collection

The museum’s collection contains numerous documents, photographs, and objects related to 9 November 1938 and its aftermath. Notably, there are eyewitness reports in letters and diaries, but also sworn declarations from the postwar reparation process. The wave of arrests is particularly well documented. There are surviving postcards sent home by concentration camp detainees as well as their discharge papers. Portraits of the released detainees give us hints of their physical infirmity. Our holdings also include, for example, a once privately-owned silver bowl that still bears the scars of that night’s destruction to this day.

You can find literature on this topic from our museum library in the library’s online catalog.

Documents, photographs, and other objects related to Kristallnacht (in German) 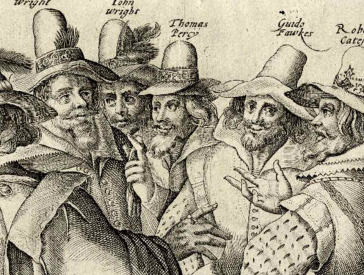 “Remember, remember...” a date in November

Michal Friedlander on the commemoration of 9 November 1938

The museum's holdings were seized after 9 November 1938.

“What do we mean when we say 'antisemitism'?”

In his lecture on the eve of November 9, Brian Klug also dealt with the terms "Kristallnacht / Pogromnacht" and their connotations.

About 9 November 1938 (Kristallnacht) and other topics