This tour presents the core exhibition with a focus on the historical epoch room Catastrophe. An introduction to the museum building’s iconic architecture is part of this exhibition tour.

962 decrees were issued against Jews from 1933 onwards. Printed on large flags suspended from the ceiling, they form an installation that makes the extent, completeness, and perfidy of the Nazi regime’s bureaucratically decreed Antisemitism spatially perceptible. Opposite it is a map projection that spatially and temporally pinpoints violent attacks on Jewish people, shops, and community facilities, thus showing another central aspect of persecution.

Exhibits from our family collections illustrate attempts to flee Germany. Striking objects such as “Judensterne” (Jewish Stars), passport photos of Jewish forced laborers from the Berlin firm Ehrich & Graetz, and personal documents allow insights into biographies and raise questions: Why was the escape not always successful? How did Jewish resistance make itself known?

You can book the following tours as a group, a family, a pair, or as an individual. We offer guided tours and workshops on your desired date for groups of up to 8 people. Please contact us 4-6 weeks before your desired date for this service. You will find details on the page of the tour in question. 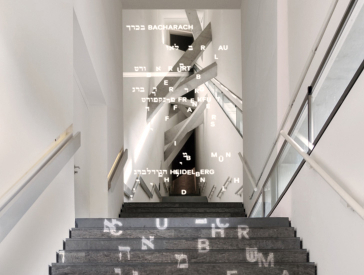 Antisemitism. The Rumor about Jews

Tours and Workshops for School Groups

School groups can book a variety of guided tours and workshops at the museum.

Jews in the Christian Middle Ages and the Early Modern Period

Religion and Ritual. Are There Jewish Things?

Workshop for school groups from grade 5 to 13

Bookable programs for current exhibitions and beyond