Medieval Jewish mystics are said to have worked in unison in order to make a golem, an act mirrored in the collaboration between Mark Berghash, Rimma Gerlovina and Valeriy Gerlovin. Combining elements of photography, concrete poetry, performance and body art, the artists created a life-sized golem, each depicting a section of the human body adorned with painted Hebrew letters. Arranged in a grid like a Hebrew crossword puzzle or Scrabble board, the possible "readings" offered by this composition constitute a witty, multilingual play of words and meanings.

Reading horizontally from right to left across the middle grid, we have the Hebrew word emet (אמת)—"truth"—one of the combinations of letters said to animate a golem. The two letters painted on the figure’s hand spell met (מת)—"death"—the specific combinations of letters that will render a golem lifeless, the word’s meaning accentuated by the blood-red color. Once we start to read the letters along the vertical axis of the grid, the possibilities multiply. Beginning with the large black aleph (א) emblazoned on the chest and combining it with the two letters on the figure’s ankle (דם) we get adam (אדם), "man." But the second syllable of that word—dam (דם)—is the word for "blood2 in Hebrew, its meaning also highlighted by the use of red. However, we could read this same combination of letters as dame, the French word for "woman." If we include the letter mem (מ), which is painted on the figure’s head in sounding out the letters, we get "Madame."

The gender-bending wordplay is consistent with the mixing of male and female anatomies in the figure itself, which boasts a dainty female head perched atop a hairy male chest. Constructed from parts taken from different bodies, the figure calls to mind one of the golem’s most famous relatives, Frankenstein’s monster, though this golem is decidedly more beautiful. The discrepancies in scale and gender give the figure the appearance of having been created by exquisite corpse, a game (from the French cadavre exquis) favored by Dadaists and Surrealists as a collaborative method for creating a composition, the goal of which was to transcend rationality. We, as viewers, join the collaboration, for in deciphering the combination of letters, we help this particular golem come to life. 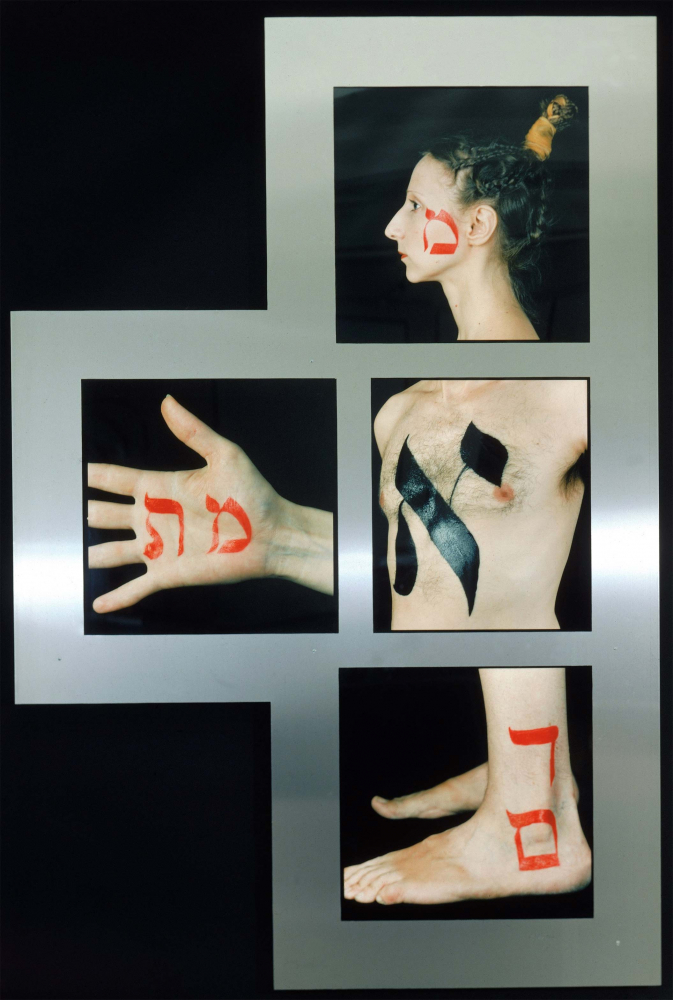