Our collections trace their roots to the Jewish Department of the Berlin Museum. This museum of city history in the western part of the city was located in the building of the old Superior Court of Justice, erected in 1732, which now contains the entrance to the Libeskind Building.

Initial Inspiration and Kernel of the Collection

The Berlin Museum had its initial inspiration for a Jewish museum in the 1970s. With the support of the Gesellschaft für ein Jüdisches Museum (Society for a Jewish Museum), many of whose members were Berlin-born Jews who had emigrated during the Nazi era, founded in 1975 and sponsored by funds from the Stiftung Deutsche Klassenlotterie Berlin, the museum began assembling a collection.

The kernel for the Judaica collection was the collection of Zvi Sofer, a cantor from Münster, acquired in 1981. It was joined by exceptional individual pieces such as George Wilhelm Marggraff’s Hanukkah lamp from 1776. Day-to-day artifacts from Jewish families have also been in the scope of the collection from the beginning.

In the Footsteps of the First Jewish Museum in Berlin

Carefully chosen visual art was also acquired, such as the Biblical paintings of Lesser Ury and the nearly complete collection of Jakob Steinhardt’s graphic art. This followed in the footsteps of the Berlin Jewish community’s Jewish Museum – destroyed by the Nazis in 1938 – the only Jewish Museum of its time to document the work of contemporary Jewish artists. Several works of art from the holdings of that first Jewish Museum in Berlin are now in our collection, for example portraits of figures from the Jewish Enlightenment, which the Israel Museum presented to us as a permanent loan.

The collection is now the most extensive of any Jewish museum’s in Germany; however, compared to those of other museums of cultural history, it is still fairly modest. 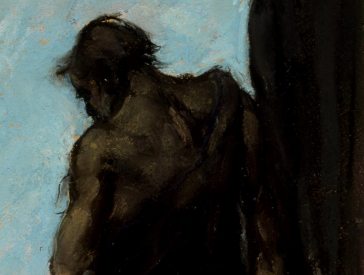 Moses Looks upon the Promised Land

A painting by Lesser Ury 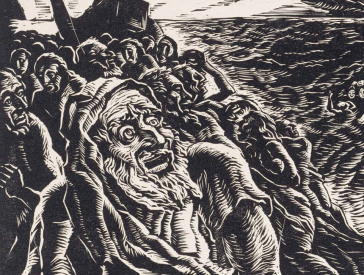 Passage through the Red Sea

This woodcut by Jakob Steinhardt illustrates a 1920s Haggadah.