Passage through the Red Sea: A Haggadah Illustration by Jakob Steinhardt

They barely escaped with their lives – as is revealed in the expression on Moses' face in this woodcut by Jakob Steinhardt (1887–1968).

When the Israelites fled from Egypt, God parted the Red Sea so that they could reach the far shore in safety. The waters closed behind them, drowning their pursuers.

The print comes from a Haggadah, the book read at the Passover seder that recounts the exodus from Egypt. Erich Göritz, a textiles manufacturer from Chemnitz, had commissioned it from the artist Jakob Steinhardt. Steinhardt was one of the most important Jewish expressionists and is known primarily for his woodcuts. 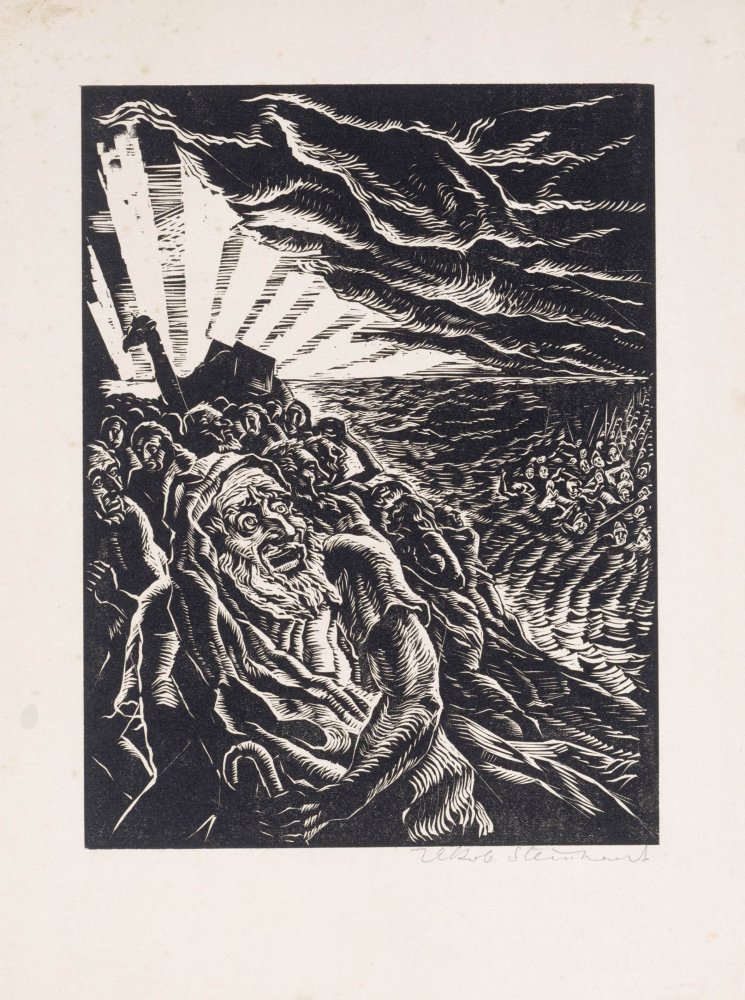 Moses, a prophet who rescued the people of Israel from Egyptian slavery and led them through the desert to the Promised Land, received from God the Ten Commandments and the Torah on Mount Sinai

Passover, Pessah (Hebr. for passing over) holiday in the spring commemorating the Exodus of the Israelites from Egypt

A Synthesis of Tradition and Modernity

Steinhardt's Haggadah was published in 1921 by the Ferdinand Ostertag publishing house in Berlin. Its artistic and historical significance rests on the artist's synthesis of tradition and artistic modernity. Steinhardt took up elements of the well-known Amsterdam Haggadah of 1695, and artist Franziska Baruch, who designed the Hebrew typeface, drew on the Prague Haggadah of 1526.

An Art Book for German Jews

After publishing the valuable large deluxe edition, Ferdinand Ostertag introduced a compact popular version of the Haggadah in 1923. Although it was better suited for use at the seder table, it only contained the Hebrew text. Like the deluxe edition, it was thus more of an art book than a liturgical work since most German Jews had only a poor command of Hebrew.