“Ask me, I’m Jewish.” Experiences and Dialogs in the Exhibition “The Whole Truth”

With a flip of a wrist, showcases turn arbitrary objects into works of art. Now, I can find out what it will do to a human being. I am sitting in a transparent case which is part of the current special exhibition The Whole Truth… everything you always wanted to know about Jews. The visitors pass by, and we observe each other. Many read the text on the wall, throw me a look and hurry away.

Some stop, but keep a safe distance. I clear my throat, smile invitingly, and motion to the button on my blouse: “Ask me, I’m Jewish.” I qualified for this position, as I learned from a speech at the opening of the exhibition, by claiming to be able to tell the “whole truth” about Jews. Will anyone ask me to? The distance gradually shortens. One man wants to know what the object label on the case-window says – he does not have his reading-glasses with him. “Species: Diaspora Jew, Sub-species: Eastern European Jew, Variant: Banana Jew.” Thank you, says the man, and leaves quickly. “Banana Jew? Never heard of it,” says a woman. That was the term for Jews in Poland, I explain, who received citrus fruits and bananas from their relatives in the West.

Hesitantly, more people join the bystanders in front of my showcase. “Are you allowed to bring flowers to a seder?” “Can you sew a foreskin back on?” “Do Jews have specific, genetically transmitted diseases?” “Can you get Josef Joffe to write for the Jüdische Allgemeine?” (Aha, a Jew – he doesn’t ask questions, he gives me an assignment.) “What do you read during a Bar Mitzvah?” “Do you think Israel should endorse gay marriage?” The showcase is turning its occupant into an authority. One man asks me for my opinion on the Cyprus crisis (just for the record, I assure him that I did not cause it). A pity my daughters can’t see my growing acclaim. “No showing off, no giving advice, and no trying to be funny, especially not on our account” – these were their instructions for this evening. I decide to wear the “Ask me …”-button at home, too. 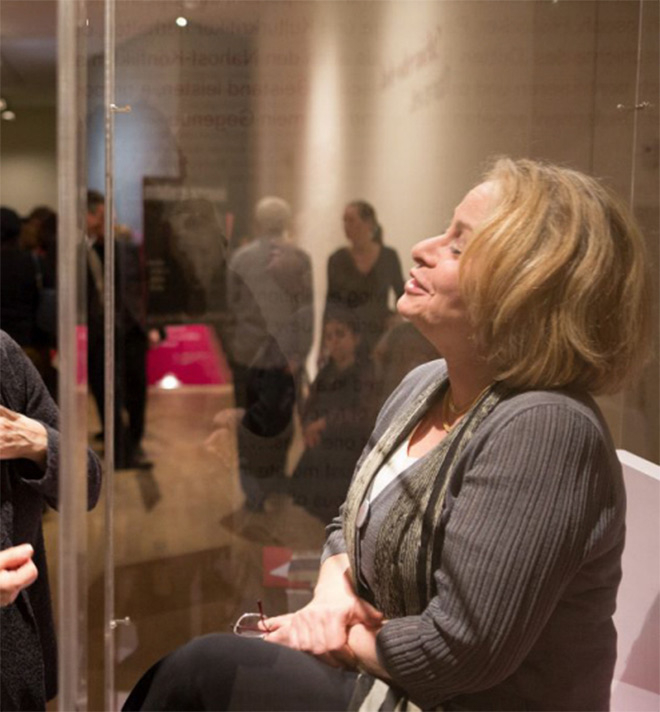 One caller from the rear: “What do you say when you don’t have an answer?!” I stand up and tell the story of a coachman who convinces a travelling rabbi to trade roles with him. The fake rabbi is met with great respect, he is served meals and entertained – and is confronted with a tricky Talmud question. With an expression of agony on his face, he waves the real rabbi to his side: “Easy questions for my coachman, please!” I tell the caller that he is welcome to play my coachman.

The questions are coming at me from all sides now: “Do Jews believe in life after death?” “What unites Jews?” (Their common wish to not be united, of course.) “Don’t you need a break?” – This question comes from a man who takes care of homeless people at Café Platte. I ask him: “What brought you to the exhibition?” “Are Jews special?” A woman: “Yes, like all humans.” The visitors are now talking to each other and I’m listening – the information box becomes a site for general exchange. One man in his sixties, who has been watching quietly, steps closer. Softly, he tells me that his mother revealed to him, as she lay on her death-bed, that he was the son of a Jewish businessman. One woman, who was jilted twenty years ago by her Jewish boyfriend because he couldn’t marry a non-Jew, wants to know what I make of it. The showcase can be like a confessional box or a therapist’s armchair. When I leave after two hours, twenty visitors are standing in front of me, discussing. The last question comes from a young woman: “Can I take a seat in the box?” She would like to be a wannabe-Jew, briefly.

No one wanted to know the “whole truth about the Jews.” 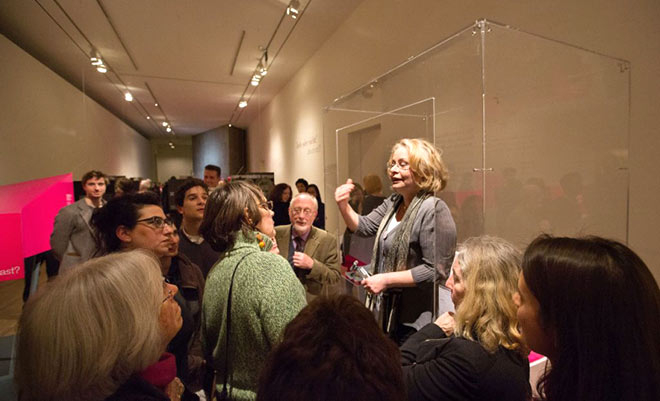 Olga Mannheimer (2013), In the Showcase. “Ask me, I’m Jewish.” Experiences and Dialogs in the Exhibition “The Whole Truth”.
URL: www.jmberlin.de/en/node/6415

Behind the Scenes: Entries on the Exhibition “The Whole Truth” (7)