From Wagner to the Weather

This was a truly extraordinary experience. The best moments were when the visitors started talking not just to me but to each other, and we wound up talking about Wagner and the weather rather than ‘just’ about growing up Jewish – or, more specifically, in my case as the daughter of a Jewish-American mother and a German, (formerly) Protestant father – in Germany and how odd it was to be sitting in a glass showcase in an exhibition.

I was reminded of the moment in 1998 when I returned to Germany from the U.S. (although I did not want to see it that way at the time). The German publisher I was working for in New York had just been appointed State Minister of Culture by Gerhard Schröder, and I continued working for him in the Federal Chancellery, first in Bonn, then in Berlin. Back in New York, an editor at Henry Holt said to me: “Well, well, isn’t that a great job for a good little Jewish girl, working in the German government?” I thought about it, and said: “Exactly.”

So, I guess this was what brought me to sit in a glass showcase in a show at the Jewish Museum Berlin, where I have been working for twelve years now, on a seemingly quiet Monday afternoon. In my two hours of being a living exhibition object, I ...

By a German woman: “Is it obligatory in Judaism to attend synagogue?”

By a French woman: “Don’t you agree that it was a big mistake of the Allies after WW II (sic!) to found the state of Israel?”

By a German student: “Is it true that the Jews don’t look forward to rewards in the afterlife, but center their deeds on the present life?”

By an American speaking German to me with a heavy accent even after I volunteered to speak English (obviously he was addressing a larger – largely imaginary – audience than just me in the box): “Aren’t you ashamed of yourself to sit in this showcase? Do the poor Germans now even have to rely on the Jews to help them understand Judaism better? Is that really our job?”

By a couple of older German women: “That’s all very well, but is your son circumcized?”

... got to be part of the different conversations that arose from this odd set-up:

An old-school American gentleman, whose parents had come to the U.S. from Kiev in the early 1900s fleeing the Czar’s pogroms, talking to a school teacher from Bremen, whose father was a simple, not very well educated carpenter who refused to join the NSDAP. There had been no significant repercussions, he told his daughter, born in 1941, insisting that all Germans who joined the Nazis did so of their own free will, even if they presented it differently after the war.

A group of German twenty-somethings talking to a thirty-something Israeli couple, who were in Germany for the first time and felt horribly uncomfortable whenever they heard German spoken in the streets, especially over the loudspeakers in train and subway stations. She realized it was unfair and irrational to feel this way, the wife said with a stony face, but she had nightmares and couldn’t wait to leave. “How can you stand living in Germany?”

A Rabbi from New Jersey, who was born on an U.S. Army base in Munich in the 1960s and has two German birth certificates: one that reads “Religion: Protestant” and a second one, in which – after his father, an army chaplain, complained – the entry was changed to “Mosaic.” The explanation at the time was that German bureaucrats would not write “Jew” or “Jewish” on an official document.

A very shy older woman from Dresden, who smiled sweetly, and, when I asked her whether she had any questions for me, answered: “I have many, many questions, but none that you can help me with. I am full of questions for my parents, who were ardent Nazis, but they are long dead and I didn’t ask them when I still had the chance.” Her eyes filled with tears, so did mine – and then she quietly thanked me for being there in the showcase, at this Jewish Museum.

And in a random, funny coincidence, at 2:30 p.m. I talked to an 80-year-old American Jewish couple from San Francisco, who came to Berlin to see the complete Ring at the Staatsoper (their fifth), and at 3:15 p.m. I met a young Jewish soprano from New York who just sang in Parsifal at Deutsche Oper.

That a Jewish mother, when her children come home from school, doesn’t ask “what did you learn today?” but rather: “what questions did you ask?”

I’ll have to remember that when my daughters and (uncircumsized!) son start elementary school. 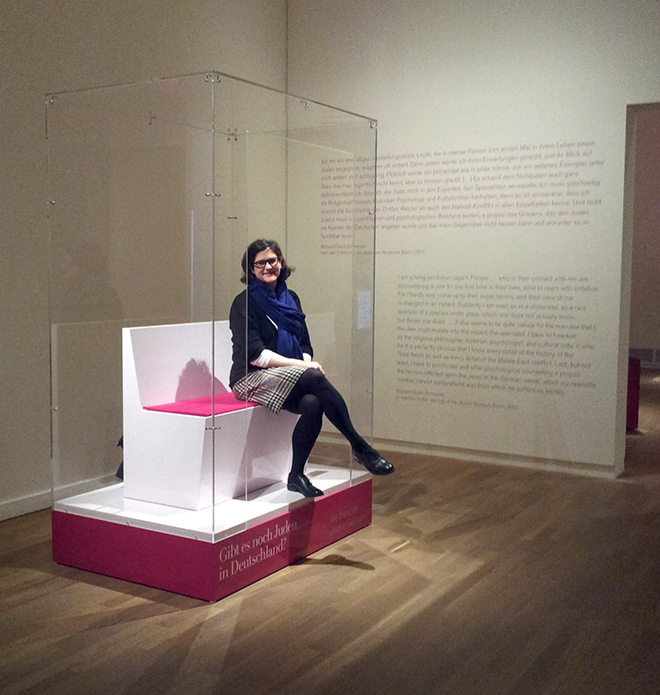