The Whole Truth: a Continuing Discussion

There are people who visit the special exhibition The Whole Truth not once or twice but a few dozen times: museum guides, those of us who accompany visitors through the exhibition. This time, though, our job isn’t to introduce the exhibits and their deeper meaning but instead to elicit commentary from this very real and tangible general public – and to moderate any discussion that follows. After all, the questions on which the exhibition is based also came from visitors. The museum reflects them in a great number of objects that the curators sought out.

The exhibits are very various and consistently surprising; they strike a wide range of cadences as well. Most visitors are astounded and speechless at the chutzpah of some curatorial arrangements. But as soon as a group begins to move through the exhibition and to engage with its guide, the speechlessness transforms into eloquence. Contradicting opinions are expressed, as they often are, in front of an exhibit. Here, though, you notice that it’s not about one opinion being more true than another, or about the object and its historical significance, but rather about talking about it. Simply about having a reaction and an opinion.

And so many clichés and prejudices about Judaism also circulate in the exhibition: but not in a way that they’re showcased and debunked. In five boxes you yourself can vote on prejudices, and it would probably be a prejudice to read this only as a malevolent mirror. Rather, the visitors’ very different and sometimes contradicting reactions show that there isn’t a right or wrong attitude towards these clichés. In fact, it’s first and foremost about bringing them into the open. And occasionally laughing at them.

At the end of a tour, even the silent visitors see what a wide range of relevant and yet varied reactions to the exhibition is possible. A formidable installation on an entire wall has emerged from the single notes and post-its that replaced the usual visitors’ book: Berlin’s general public has augmented the exhibition with it’s own contribution. There, you can read not only witty commentaries but you can also see how remarkably freely and imaginatively people have endorsed, caricatured, or expanded on the opinions of others’ with their own thoughts. And for a happy moment the viewer may realize that “the whole truth” is more than an ironic catchphrase: it could actually exist, as a continuous, inviting, and unending discussion that people and things enter into for the time that they’re gathered here together. On that note, come to the exhibition! 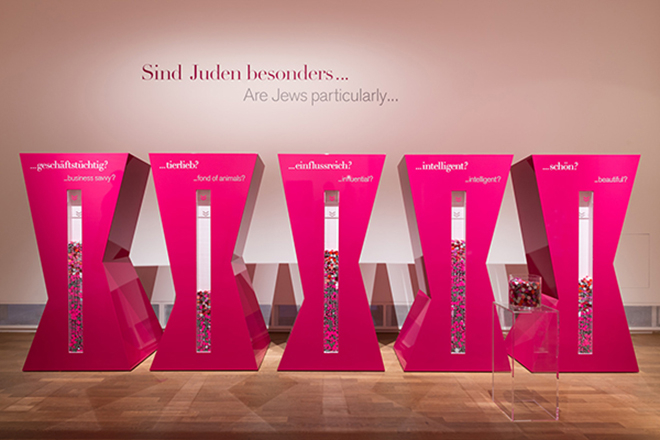 Barometer for the question “Are Jews particularly …?” in the exhibition The Whole Truth; Jewish Museum Berlin, photo: Linus Lintner