Question from Visitors to our Museum

When you do a search of our library catalog for Goethe you could get this idea: 70 hits for works by or about the German poet (by contrast, Schiller only gets 16). And until a few years ago Cotta's impressive edition of Goethe works from 1867 appeared in our permanent exhibition. Many people used to ask the visitor’s desk: “Was Goethe Jewish?” No, he wasn’t. But for many Jews he was the paragon of German culture, and his works symbolized membership in the German educated middle-class.

A few months ago, the Richard M. Meyer Foundation gave us more than 100 books by and about Richard M. Meyer himself. The son of a banker, art collector, and man of letters was a Goethe scholar. Meyer never acquired a proper professorship, but his 1895 biography of Goethe won awards and was published again and again – as a single volume, in multiple volumes, as a people’s edition and a reserved edition. According to the biography, Goethe saw “nationalities merely as transitional forms” (Volksausgabe [People’s Edition] 1913, p. 352).

Statements like this illustrate the dilemma of German-Jewish assimilation during that period. If a Jewish reader of Goethe placed the poet’s cosmopolitanism in the foreground, he exposed himself to the accusation of misunderstanding the German essence of his writings. But when he explicitly recognized just this quality in Goethe’s language, his very right to have a say was contested.

As Meyer emphasized, the German “intellectual hero” did in fact employ the idea of a world literature, as well as biblical references, too: He compared the Faustian pact with the devil with the “basic motif of the wager” from the Book of Job (ibid, p.343; not included in the first edition, cf. p.356).

And yet Goethe wasn’t a “ticket of admission” (Heine) to German culture: Richard M. Meyer was never baptized. He died in 1914 of cerebral apoplexy. His wife Estella, to whom the Goethe biography is dedicated, was murdered in July of 1942.

Bernhard Jensen, library, would like you to know that the library has moved into the new Academy building, with a reading room outfitted with fast computers, bright desk lamps, and a copy machine. If we sparked your interest in the Jewish reception of Goethe: please come by! 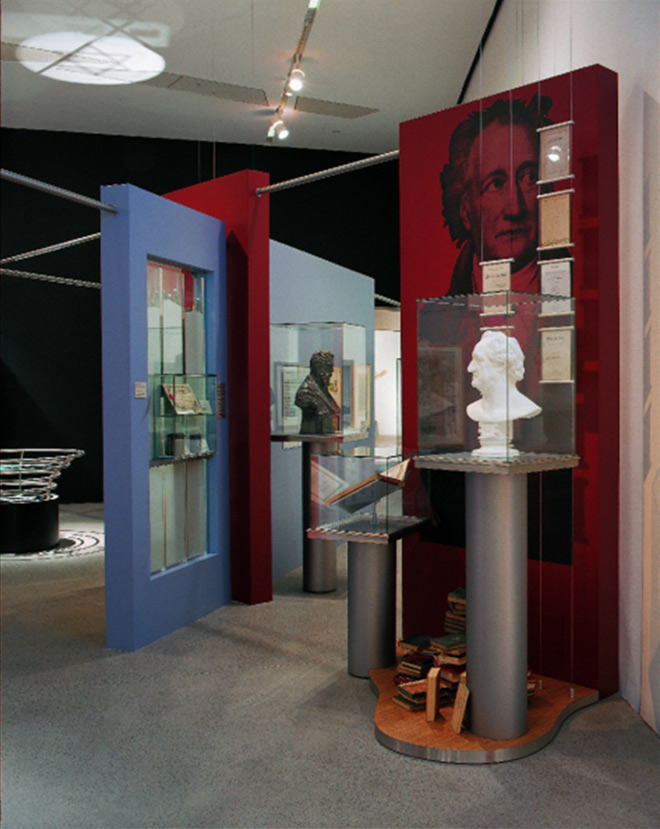 Documents in our online collections (in German)