“Why do some Jews rock back and forth while they pray?”

This month, we respond to Boris, who wants to know “why some Jews rock back and forth while they pray?”

Dear Boris,
Many people have asked why religious Jews sway back and forth while praying. This very old custom is called shuckling in Yiddish and means to rock, shake, or swing. As with many customs, it is easier to describe when and where it was practiced, than to answer definitively, why people shuckle while praying and studying the Torah.

The habit was noted already by the prophet Mohammed, who is said to have advised his adherents not to sway back and forth during religious services.

In 12th century Spain, Rabbi Yehuda Halevi reported that ten or more men sometimes read from just one book. To do this, they each walked up to the book, bent over the text and then took a step backward again, making room for the next reader.

In another source, psalm 35,10, the words “All my bones shall say: ‘HaShem, who is like unto Thee” are interpreted as an appeal to involve one’s whole body in prayer. 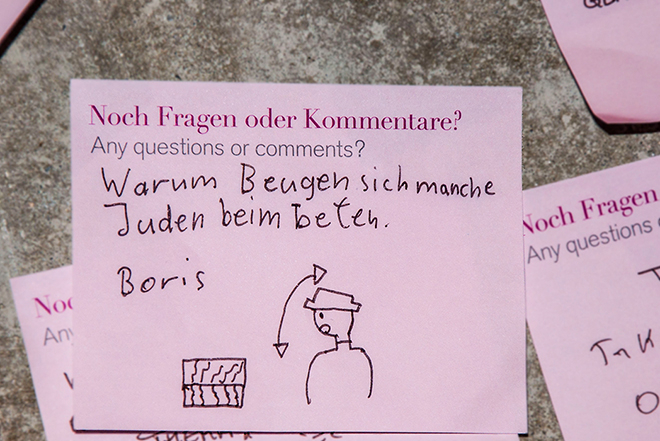 “Why do some Jews rock back and forth while they pray? Boris”; Jewish Museum Berlin, photo: Thomas Valentin Harb

Another explanation explains rhythmic movement as a way to concentrate on praying and learning, and ward off distracting thoughts. According to the mystical text Zohar, a person’s soul emanates from divine light. Every time a Jew engages with the Torah, the light of his or her soul ignites, which is why he or she moves like the flame of a candle. This striking image illustrates the desire of many religious Jews to connect directly with God by learning and praying.

Some rabbis of the past have permitted their congregants to shuckle only during select prayers. In the 19th century, German Jews were eager to adapt their behavior to that of majority society, which is why most rejected shuckling. Today, shuckling is generally understood as a physical accompaniment to the rhythm of prayers and as a way to concentrate on them more deeply.

Miriam Goldmann, Curator of the Exhibition “The Whole Truth” 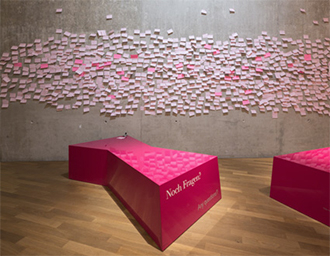 Miriam Goldmann (2013), “Why do some Jews rock back and forth while they pray?”. Question of the Month in the Context of the Exhibition “The Whole Truth”.
URL: www.jmberlin.de/en/node/6231