“Are there gay Jews?”

Date me and find out! – Question of the Month in the Context of the Exhibition “The Whole Truth”

To address the subject of homosexuality and Judaism, we spoke to a gay Jew and had the following exchange:

I’ve often been asked: do you have problems as a Jew in Germany? And I have to say: I’ve actually had more negative experiences related to my homosexuality. I always wear the Magen David, the Star of David, around my neck. In the summer at the pool, it’s clearly visible. And I’ve never had problems with it. In Germany today, I can live my homosexuality as well as my faith, my Jewishness. So as a Jew I’ve made my peace with Germany.

I come from a secular family: we’re believers, and we’re part of a congregation, but we’re not strictly pious. Especially when you’re young, when you spend time partying and enjoying life, and then you go to synagogue, you can have difficulties. When I came out of the closet and started to live my homosexuality openly, I noticed that it disturbed people that I wasn’t as much a part of the congregation anymore. I no longer felt at home in my parents’ community, so I left. I have always felt like a bit of an alien there – like I didn’t really belong. 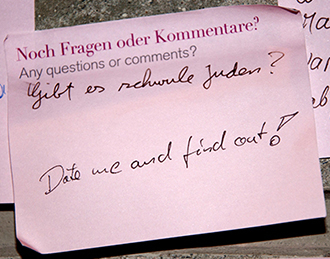 Question in the exhibition The Whole Truth: “Are there gay Jews?” Answer: “Date me and find out!”; Jewish Museum Berlin, photo: Anina Falasca

I got to know a Reform congregation through a partner, and I found a new religious home there. Then, for several years, I wasn’t active in the community, but lived my faith for myself, privately. I often asked myself: is homosexuality accepted? Clearly, in the Orthodox and Conservative realm, it isn’t: “you shouldn’t sleep with a man the way you would with a woman.” It’s prohibited to be profligate with your seed; that’s written in the Tanakh, the canon of the Hebrew Bible. I noticed that there are a lot of lesbian and gay rabbis in Reform Judaism, but only in Reform Judaism.

Religion and faith are very important to me. I would like to find a partner whom I can marry someday under the chuppah and adopt children with. It’s difficult to reconcile homosexuality and Judaism. It was a very tough subject when I was younger. I felt a lot of religious guilt. You ask yourself: is this really allowed? Is this evil or a sin? Can you really justify this way of living? Don’t you want to try, at least, to live a heterosexual life? Because the majority of Orthodox Jews simply doesn’t accept you. And they let you know it. But fortunately there are organizations like “Young and Jewish”, that are very open and full of people to talk to. 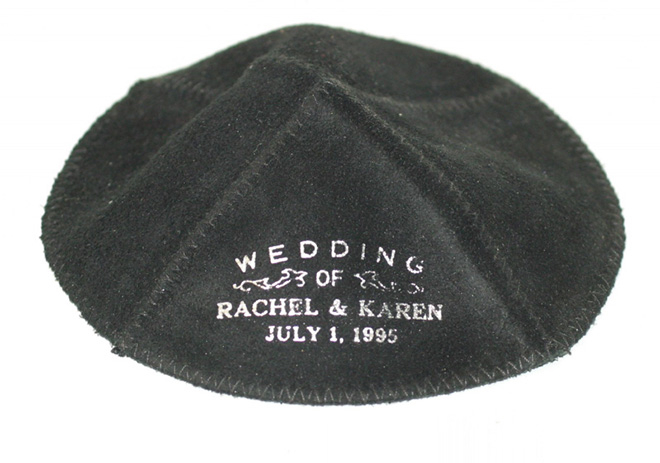 In the exhibition The Whole Truth, homosexuality is only mentioned peripherally in the context of Aviv Netter’s meshugge parties and his golden calf. Currently, the Schwules Museum is showing the exhibit lesbian. jewish. gay. The subject of homosexuality in Judaism would have fit very well in The Whole Truth. Ad hoc, I’d display the flags and buttons with a rainbow and a Star of David that the Israeli Embassy distributed at this year’s Christopher Street Day parade. A few months ago, the Jewish newspaper Jüdische Allgemeine published a long article on the title page and printed a photo of this flag. I think that’s a great idea.

Anina Falasca, Miriam Goldmann, Martina Lüdicke (2013), “Are there gay Jews?”. Date me and find out! – Question of the Month in the Context of the Exhibition “The Whole Truth”.
URL: www.jmberlin.de/en/node/6265