“Do Jews have their own language?”

This query is in fact part of any FAQ list about Judaism: it came within a hair’s breadth of being included in the exhibition. And the little discussion on the post-it note already refers to many languages spoken by Jews: Hebrew, Yiddish, and Judeo-Greek (the dialect of Greek Jews). The note even includes the traditional language of Sephardi Jews: Judezmo, also called Ladino.

At this point we could turn to Leo Rosten, author of the 1968 volume The Joys of Yiddish, republished in 2001 as The New Joys of Yiddish. He describes the difference between religious affiliation and language in a nutshell:

“Technically speaking, there is no language called ‘Jewish.’ Jews do not speak ‘Jewish’ any more than Canadians speak Canadian or Baptists read Baptist. But it would be foolish to deny that in popular English usage, ‘Jewish’ is used as a synonym for ‘Yiddish.’ After all, ‘Yiddish’ comes from the German Jüdisch, meaning ‘Jewish’, and in the Yiddish language itself Yiddish means ‘Jewish.’”

“For the benefit of innocents, I hasten to add that Yiddish and Hebrew are entirely different languages. (…) True, Yiddish uses the letters of the Hebrew alphabet, employs a great many Hebrew words, and is written, like Hebrew, from right to left (…).”

The languages mentioned here are, indeed, primarily spoken by Jews, though not all Jews have mastered one of these languages, much less more than one. Most Jews simply speak the language of the country they live in. So, in fact, Jews speak “every language”.

Martina Lüdicke, Curator of the Exhibition “The Whole Truth” 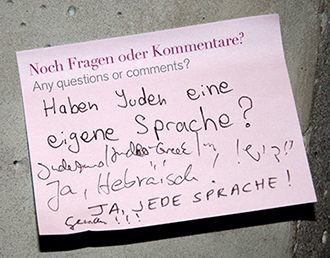 Martina Lüdicke (2013), “Do Jews have their own language?”. Question of the Month in the Context of the Exhibition “The Whole Truth”.
URL: www.jmberlin.de/en/node/6257