Dalia Castel is a filmmaker, Orit Nahmias an actress at Berlin’s Maxim Gorki Theatre. Both grew up in Jerusalem – they are childhood friends and their paths have crossed on numerous occasions. Today, they both live in Berlin. When asked why they made a documentary about their hometown, they finish each other’s sentence: “We had questions, …” Orit begins to explain, “… about Jerusalem,” Dalia adds. They turned their questions into a very personal documentary: Jerusalem for Cowards (2011). The film was screened at the Jewish Museum Berlin on 19 February 2018, and the screening was followed by a discussion. 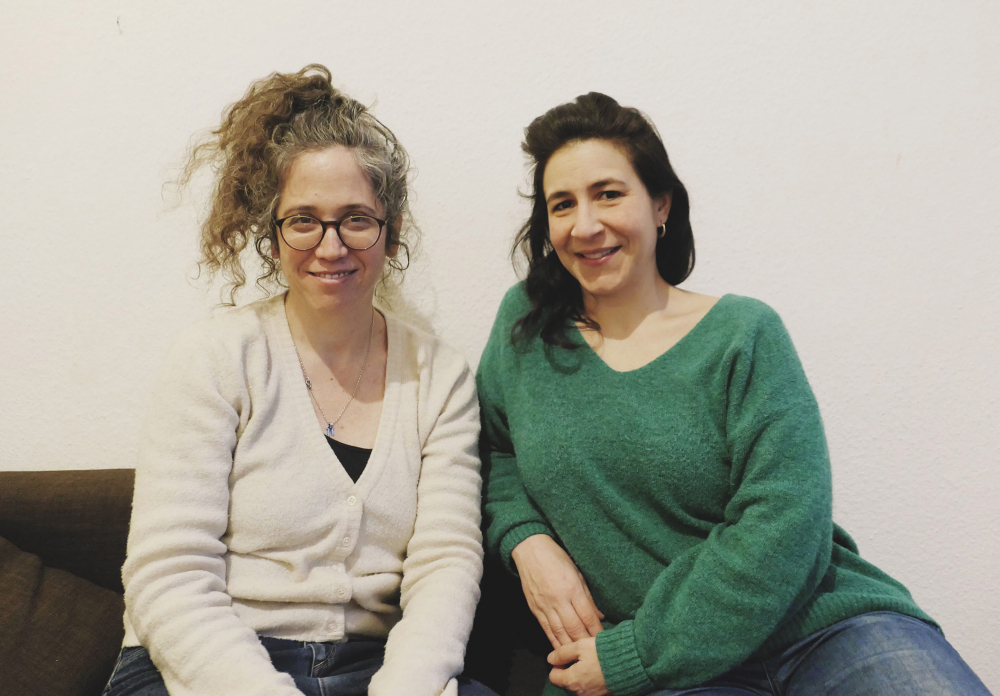 Dalia Castel and Orit Nahmias prepared for the interview by sitting on the sofa to watch Jerusalem for Cowards together; photo: private

Jerusalem for Cowards is about a visit to your hometown Jerusalem, and about you confronting the changes the city underwent since you were young. What are your feelings towards Jerusalem today – six years after filming the documentary?

Dalia Castel: I feel more indifferent than six years ago. I didn’t think filming Jerusalem for Cowards would have such a big impact on me. But after we re-watched it recently, I asked Orit, “Why do we have to belong somewhere?”

Orit Nahmias: And then I asked “Do you belong here, in Germany?” She said “No, I have let go of the need to belong to something.” For me, it’s painful to go to Jerusalem. It is like a former boyfriend – you were so in love with him. You meet again and you know you shared a lot, but there is nothing left between you. It’s painful and full of emotions. The documentary is about the wish, the need and the understanding that you belong or don’t belong somewhere. I was impressed when Dalia told me lately that she gave up the idea of belonging. Ever since filming Jerusalem for Cowards, we have let go of the nostalgia of what Jerusalem meant for us. I think where you actually belong to is your family and your friends.

Dalia: I have two kids. They do speak Hebrew as well, but they are German – they are growing up here in Berlin. When I try to tell them about my childhood, there is a lot they cannot relate to. Can you share your memories if there is no place to go back to? This is a question I ask myself.

Orit, your family has been living in Jerusalem for approximately eight generations. What made you feel that you don’t belong?

Orit: The religious, the orthodox Jews. You ride on a bus and a guy stands up and holds his hands in front of his eyes. And for Palestinians, we were the worst – although we come from left-wing families and have good connections to Palestinians. You are not wanted there. And when you are not wanted, you detach yourself.

Dalia: Nobody wants to be in a place where they are not wanted. In Jerusalem, it’s your political views against the ones of people who ‘have God on their side’. I felt not only that I didn’t belong – I was also not wanted there.

Orit: When we were filming, Dalia was in the middle of an unconcious process. Making the movie was a part of it. When I ask her today if she feels a sense of belonging in Germany, she says: “No, but it’s ok!”

Dalia: Yes, I am not supposed to feel a sense of belonging here. (laughs)

Orit: It is like when you visit a friends’ family: it’s okay to not feel a sense of belonging – but when you go to your own home and feel you don’t belong, then das tut weh – it’s really painful. And that’s why we are here in Berlin, doing what we are doing. We want diversity, but at the same time we want to be with people like ourselves. This is a problematic thing to say, I am realizing this only now. But I want to be with liberal people that accept all kinds of people. I want an artistic environment.

Was it always clear for you that you would leave Jerusalem?

Dalia: No. When we were still living in Jerusalem, none of us wanted to move. We were really patriotic.

Orit: We were taught how special and lucky we are; what an interesting place we are living in. And we got it! But then again, it’s like with the boyfriend – only when you get out you ask yourself: What kind of relationship was that?! You didn’t realize how bad the sex was because you couldn’t put it into perspective.

Jerusalem is a touristic hotspot, and very iconic. In your film, the sacred city looks dirty. Everything seems so mundane, almost trivial. How come your depiction of the city is so different from what tourists see or expect to see?

Dalia: We wanted to show what Jerusalem is for us.

Orit: From the beginning, it was clear for Dalia that she wanted to do a film that didn’t fit into the official image of Jerusalem. We didn’t want to take frames of the old city. It’s a political image. In Jerusalem, holiness and the profane, the high and low are stitched together so badly.

Orit: But I think when Dalia takes a picture of uglyness, it has poetry. She shows it in a poetic way.

Towards the end of the documentary, you two visit the house Dalia lived in for the first five years of her life. It is located in a neighborhood that used to be secular and liberal, but then became very religious. Today, Dalia’s old home is a Yeshiva (praying school). It was your plan to visit the house from the beginning. How come you avoided it until the very last moment, Dalia?

Dalia: I’m not sure. I was really stressed about it and kept postponing it! Shortly before we moved out of the house, we used to be scared when we came back from school. The tires of our car were slashed. I was afraid to go back there.

Orit: Also, we were taught to have a lot of respect for religious feelings. No one told us that secular feelings are still feelings. For me, freedom of thought and culture are holy. We were never taught that we have to fight for freedom by using the same way of thinking. And if you have two forces, and one of them is willing to burn the city… I’m not gonna burn anything! I’m just gonna leave. As an individual, it’s pointless. I will do what little I can. I’m lucky sometimes to be able to make a point in the theater.

So in Jerusalem, religious feelings are valued over secular feelings?

Orit: This feeling of “I’m sorry we are here” is very strong for us. When we went to Dalia’s house, I was touched. It’s like with the former boyfriend: you go to the house you were born in, but you are so alienated. It’s so bekannt (familiar), and at the same time it’s totale Fremde (totally alien). Entfremdet. (Estranged) And this feeling is sad.

Do you still go to Jerusalem sometimes?

Dalia: I would go to Jerusalem – but I have nobody to visit there.

Orit: Apart from my parents that I do visit, I don’t know anyone who still lives in Jerusalem. The people that we had around us aren’t there anymore – and that says a lot.

The interview was conducted by Nina Breher, who grew up in Germany’s industrial Ruhr district and thus became an expert in the poetry of ugliness. She finds the manner in which Dalia and Orit’s friendship and art inspire one another to be most beautiful. 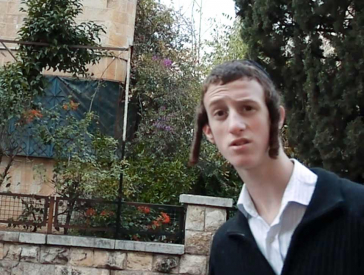