On the Hamster Wheel of Argumentation

About some visitors’ hostility to religion in the exhibition “Snip it!”

I’m not sure what time it is, but it’s already light out. My alarm clock will go off soon. My eyes are already open – the sky is its usual grey. In the space behind my eyes, arguments are going around and around – legal, religious, social, and medical. My tongue doesn’t move but my thoughts speak all the lines of this drama. Right now I’m going around and around on the hamster wheel of an argument that I got dragged into on a tour I gave the day before of the exhibition Snip it! Stances on Circumcision. Every time I thought I had explained to this visitor the profound differences between ritual circumcision of boys and female genital mutilation, she would bring us back into an argumentative spiral.

Despite Cilly Kugelmann’s assertion that we don’t want to use Snip it! to continue the 2012 debate about ritual circumcision (see the German-language introduction of the book publication, downloadable on our website); despite an exhibition that addresses, above all, the cultural and historical background of the ritual; despite my careful presentation in the tours, where I aim to encourage visitors to really see and understand, and not to judge and argue; despite the many visitors who embrace my suggestions with great openness and interest: conversations like this, whose intrusive torque spins me through the night and into the next day, are a component, whether long or brief, of almost every tour I give through this exhibition. 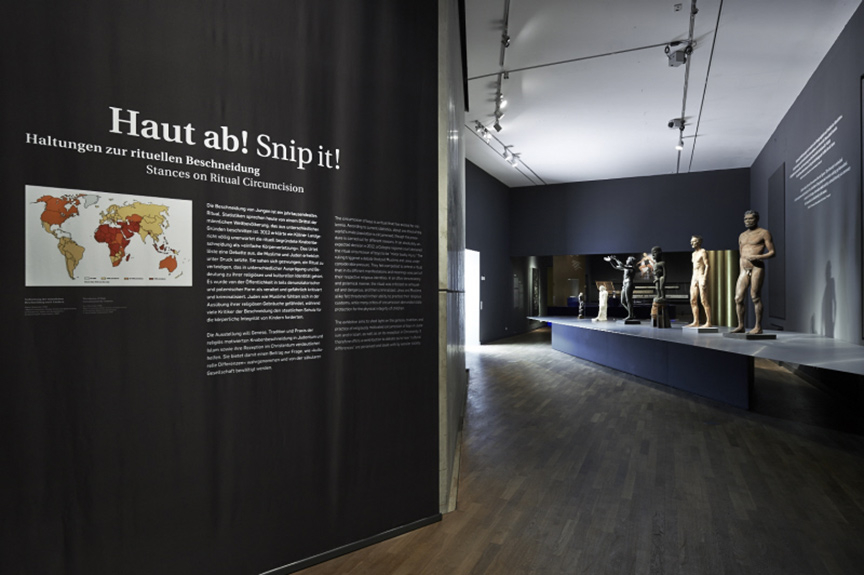 View of the exhibition Snip it! with the room “On the Knife’s Edge;” Jewish Museum Berlin, photo: Yves Sucksdorff

The mode of encounter: judge

Instead of the traditional guided tour of a museum, we offer our visitors a kind of wandering discussion circle. The intention is to invite them to an encounter. Many people don’t come, however, as they normally would to our museum – interested, careful, reverent, ashamed, excited, testing, bored, exhausted, pensive, or any given mix from this incomplete list. Instead, adults in particular come to pass judgment. Museum visitors become judges. The objects, pictures, and texts are no longer sources of knowledge or sites of experience; they aren’t evidence of history or even “boring old stuff.” Now they are irritants that just provoke reactions for or against. Everything on display seems subject to a right-wrong dichotomy that becomes concrete, one object at a time, as it is observed. And it happens in this same spirit, again and again.

“A high price,” judges a secondary school teacher, for example, his voice full of thundering pathos. We’re in the “Word Room,” the second chapter of the exhibition. The latest in lighting technology illuminates white letters on a white wall: the groundbreaking quote from Genesis dazzles the visitors. We stand across from one another. The sculptural quality of our bodies is highlighted by the precision of the neon lights.

It is as if we ourselves had just stepped down from the knife-blade of the catwalk in the first chapter of the exhibition that we were just standing in front of – in front of statues from five thousands years of human history, of ideal body images and of so much cultural diversity chiseled into stone, carved from wood, poured into plaster and resin.

The teacher is in his mid-fifties, German, and a secular Christian. A high price, he means, that “the Jews” had to pay for “their covenant” with God. And because “a high price” spoken with such thundering tones means too high a price, we now have our first circumcision critic of this guided tour. It didn’t take long, as usual. The charge is that parents who have their children circumcised assign a value to this act that it doesn’t have. And so this criticism leads straight to one of the great challenges of this subject and of the exhibition: to understand that there are people for whom circumcision has an enormous value and who are willing to risk the pain and risks of surgery. That this isn’t in fact too high a price for what circumcision means to them. 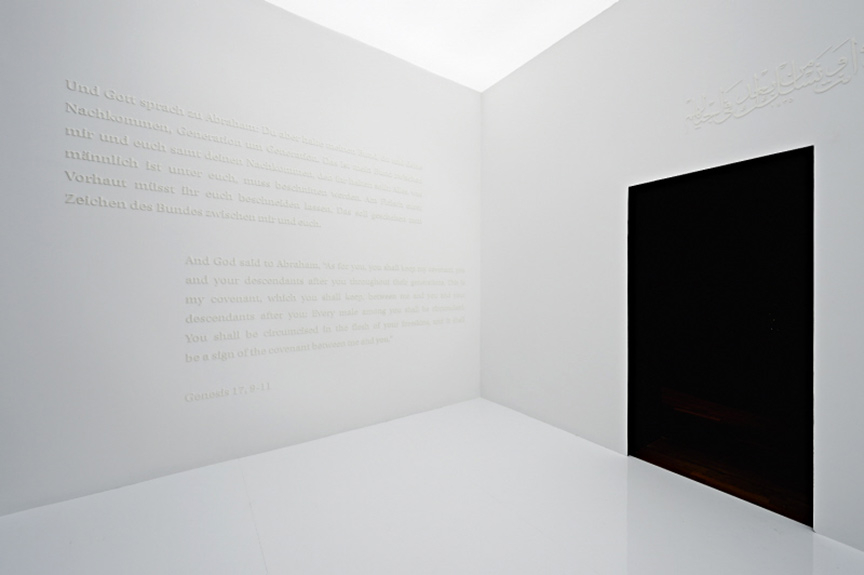 In the “Word Room” of the exhibition Snip it!; Jewish Museum Berlin, photo: Yves Sucksdorff

We’re now in the second part of the “Round table trialogue,” and the fourth space of the exhibition. This is where we introduce circumcision as it’s practiced in Islam and this is where I start the final discussion with this teacher’s class – from a school where, according to the students, there are no Muslims but there is one Jew. A high school student takes the floor: “Honestly, this hasn’t changed my opinion about circumcision – it still seems completely idiotic to me.”

Taken altogether, the reproaches about what was omitted are indicative of quite another set of omissions: so far, no one has asked whether we’re addressing the exposures that men suspected of being Jewish were forced into by the Nazis; so far, no one has asked to see the wall where we put up the anti-Semitic and anti-Islamic tirades that defaced the comment sections of many articles on the 2012 circumcision debate; and so far, no one has asked whether we could have addressed the source and character of this fourth position – the one from which such tirades emerge: an insensitive, coarsely generalized, poorly and inaccurately informed hostility towards religion.

Live and in color

But the curators had foresight here. We did not need floor space for this stance. As we can see, many visitors bring it into the exhibition and act it out to their heart’s content.

To this end, I recommend, not only to my friends and acquaintances but to all readers, to visit the exhibition, and particularly to visit on Sunday at 14h and to participate in the wandering discussion circle on the guided tour. With some good (and bad) luck, you will have the unsettling pleasure of experiencing this entire wide spectrum of positions. Alongside a cultural and historical introduction to the Jewish, Muslim and Christian traditions of ritual circumcision, you will see – live and in color, narrow-minded and self-righteous – hostility to religion in action.

Andy Simanowitz (2015), On the Hamster Wheel of Argumentation. About some visitors’ hostility to religion in the exhibition “Snip it!”.
URL: www.jmberlin.de/en/node/6561

A Tour of Tour Experiences

Some guides and visitors have written about experiences they had on various tours at the Jewish Museum Berlin.