Arnold Bernstein: Memories of a Successful Career as a Shipowner

This model cargo steamship, complete with the "AB" insignia on the chimney and the merchant flag at the stern, was presented to the Hamburg shipowner Arnold Bernstein (1888–1971) in 1929 as a gift for his company's tenth anniversary. It's a replica of the very first ship that Bernstein bought, which he named Max after his father. 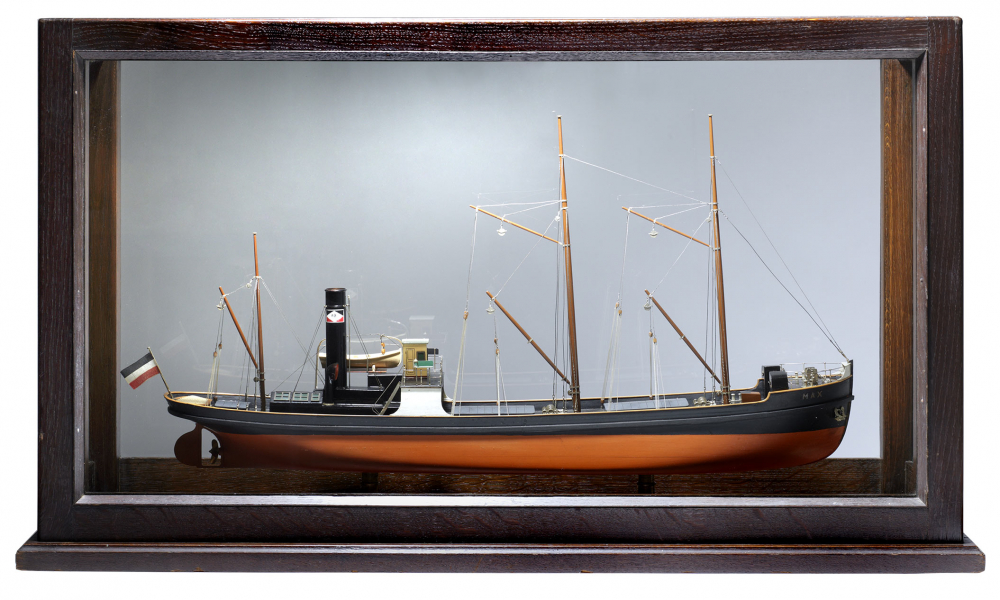 At that time, Arnold Bernstein already owned several vessels. Instead of shipping coal, ore, and wood as in the company's early years, he now transported cars from the United States to Europe. His innovative ideas brought the shipowner great success, so that in just a few years he was running the world's largest car transport fleet. When the Great Depression began to affect exports to Europe in the early 1930s, Bernstein converted his freight carriers into passenger ships. Now they were carrying tourists across the Atlantic, no longer cars.

Arnold Bernstein's career came to an abrupt halt in 1937, when he was arrested for alleged breach of exchange control regulations and sentenced to several years' imprisonment and a heavy fine. Shortly before the Second World War began, he was released. Robbed of all his possessions, he managed to emigrate to the United States just in time.

New Start in the US

There Bernstein re-entered the shipping industry and had established his own passenger line by the end of the 1950s. As a reminder of the beginnings of his successful career in Germany, Arnold Bernstein took the model ship with him when he emigrated. It was given to the our museum as part of the shipowner's extensive bequest by his son Ronald Barnes in 2007.

Find out more on our online project “1933: The beginning of the end of German Jewry.”