From the Imperial German Navy to the Israeli War Fleet: Life Story of an Accomplished Seaman

The sailor Max Haller's (1892–1960) personal collection of his medals from the First World War is displayed on a velvet cushion. The son of a synagogue cantor from Silesia began work as a machinist on German merchant vessels in 1911 and joined the Imperial German Navy two years later. He volunteered for service in the German submarine fleet in 1915 and was on active duty in the Mediterranean until the end of the war. 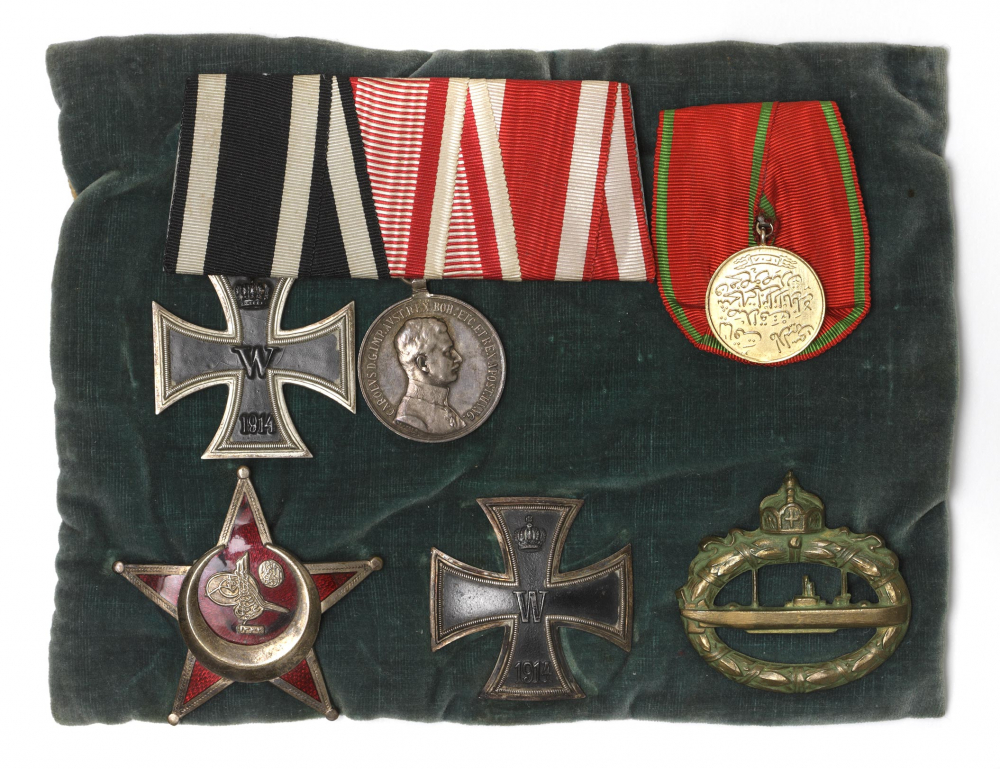 Max Haller received military decoration from three allied empires. The Austrian emperor honored him with the Medal for Bravery bearing the portrait of Charles I. The Ottoman Empire presented the German seaman with the Iron Crescent, also known as the Gallipoli Star, and the Liakat Medal of Merit with a red-and-green ribbon. He received First and Second Class Iron Crosses and the Submarine War Badge, first introduced in 1918, from the German Empire.

Medals as Symbols of Patriotism

Around 100,000 German Jews fought in the First World War, of whom approximately 12,000 fell, among them Max Haller's two brothers. Max Haller later opened a radio shop in Berlin, which was threatened by Nazi brownshirts in the boycott of April 1933. Haller pointedly placed this velvet cushion with his medals in the display window as an sign of his service for his country. Perhaps for this reason, his shop was unharmed apart from marks on the windows.

Haller decided to leave Germany, and emigrated with his family to Palestine in the fall of 1933. There he returned to seafaring as chief engineer on various merchant ships. At the age of 56, he volunteered once again for active duty in the newly formed naval arm of the Israeli Defense Forces. He retired as a captain in 1957.

On 1 April 1933, a nationwide boycott was launched targeting Jewish-run stores, doctors’ offices, and law firms. This marked the beginning of the organized persecution of Jews in Nazi Germany. The April Boycott was decreed and organized by the Nazi party’s leadership. In many cases, it was associated with damage and looting of the businesses in question and violence against their owners and staff.
More on Wikipedia

Curator Leonore Maier reports on the medal's special significance in the memories of German-Jewish families.