“Part of something greater”

A Conversation about a Ritual Circumcision that Vanquished the Past

We have reported on the discussions that the subject of circumcision can prompt. We shouldn’t lose sight, though, of the fact that the ritual is a matter of course for most Jewish and Muslim families – as, for example, for Amitay and Meital from Israel. I asked the couple what their son Yaal’s bris was like for them. 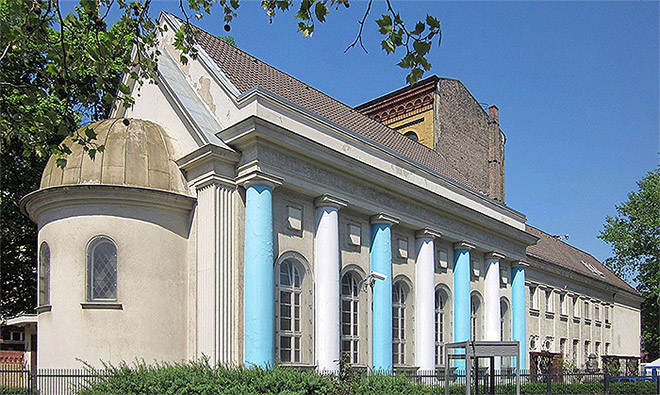 The Synagogue Fraenkelufer, where the bris of Yaal was celebrated; photo: Jörg Zägel (via Wikicommons)

In mid-December you had Yaal circumcised by a mohel at the Fraenkelufer Synagogue. Did you have to think about it for a long time?

Meital: For me, there was no question.

Amitay: Same here. But when the time approached, I did have some questions. Your own son’s bris is a completely different thing than attending those of your friends’ children.

What is the Brit Milah?

Brit Milah (Hebr. for covenant with the word), also called Bris, circumcision, ritual removal of the foreskin on the eighth day of life, symbol of the contract between God and Israel

What kind of questions?

Amitay: Why do this with such a little baby? He is so innocent, the purest thing you can imagine… But through these questions the bris took on much more meaning – the doubts are part of the ritual for me.

Amitay: Yes, but not just with the bris. That’s also the way our faith works. We lead a religious life and for us each commandment has two levels: on the one hand, you follow it because you must. But on the other hand, you ask why. And in this “Why?” you become the object of experience. For me, this is an essential element of faith.

Meital: My mother was shocked that Amitay questioned this process. For her generation the bris is entirely a given.

How did your friends react when they found out that you would circumcise Yaal?

Amitay: It’s also a given for them, though some of the employees of the hospital in Berlin where Yaal was born tried to talk us out of circumcising him. One nurse in particular warned us that we would be injuring our son and traumatizing him.

You had a mohel perform the circumcision at the synagogue. One alternative would have been the Jewish hospital, where a doctor would have done the procedure. Did you debate that decision?

Amitay: I did a lot of research to resolve this very issue. Some people believe, for instance, that the anesthetic injection at the hospital hurts the babies more than the actual procedure.

Meital: And a circumcision at the hospital would not have fit the religious framework for a ceremony with family and friends.Amitay: We wanted to have this ritual just the way it’s been done for thousands of years. There was also a very personal reason why it was so important for me to have the bris at the Fraenkelufer synagogue: My family on both sides is from Germany and had to flee from the Nazis. So for me there was a feeling of overcoming and of victory in having our son circumcised – of all places – here in Berlin, in a synagogue that was destroyed and rebuilt. I don’t believe that my grandparents could have imagined, when they had to escape 70 years ago, that they would celebrate their great-grandson’s bris here. That was really something special.

Meital: In the moment that it happened, he cried a little, but that passed quickly and a week later you couldn’t see anything.

Which moment of the bris touched you most, as parents?

Meital: When Amitay said the blessing for Yaal.

Amitay: It was the same for me. Speaking the blessings felt like a confirmation of our own existence – as if we’re all part of something greater. For me it was a truly defining moment of my life – together with our wedding and Yaal’s birth. I felt a deep sense of gratitude.

Just three years ago, there was a big debate in Germany about the tradition of circumcision. You were still living in Israel – but did you happen to hear about the discussion?

Amitay: I was studying at university at the time and I have to say that the whole debate brought me and my Muslim classmates closer. We related to it on an inter-religious level. It wasn’t just about the bris but about the value of religion. I can understand the side of the critics though, too: It is a complex subject and it’s perfectly ok to question it. Certain boundaries do need to be kept clear, however: for instance, when the criticism is anti-Semitic or Islamophobic.

The interview was conducted by Alice Lanzke, media.

Alice Lanzke (2015), “Part of something greater”. A Conversation about a Ritual Circumcision that Vanquished the Past.
URL: www.jmberlin.de/en/node/6569