"My father was announced champion shot in 1962 at Warendorf's Hinter den Drei Brücken shooting club. This was no doubt a symbolic occasion," said Paul Spiegel, president of the Central Council of Jews in Germany from 2000 to 2006, of his father Hugo Spiegel (1905–1987). "It was the first time that a Jew had been made champion shot in Warendorf, in Münsterland, or even in Germany."

And he continued: "He was a worthy champion – but not an unmindful one. When we… were finally alone, he, who never talked about the past, said… 'You see! It was right to come home to Warendorf!' And then, under his breath: 'If only our little Rosa could have seen this…'"

Persecution and a New Start: The Story of the Spiegel Family

The cattle dealer Hugo Spiegel came from a traditional Jewish family that had lived in Westphalia for several centuries. He fled with his family to Brussels following the Night of Broken Glass. He was arrested and deported in 1940. Spiegel survived the concentration camp and returned to Warendorf after his liberation. His wife and son, who had survived in hiding, also returned shortly after him. Their daughter Rosa was murdered in Auschwitz. Hugo Spiegel took up his work as a cattle dealer again and applied himself to rebuilding the Jewish community in Münster.

The photograph showing Hugo Spiegel as champion shot is one of a series from 1961–62 by the celebrated photographer Leonard Freed (1929–2006). He documented the revival of the Jewish communities in West Germany, showing images of Jewish life in Germany that were largely positive with few exceptions. Freed published a book of his photographs in a deliberate sequence and sometimes with extended captions: Leonard Freed. Deutsche Juden heute. Munich: Rütten & Loening Verlag, 1965.

On the night of 9 to 10 November 1938, Nazis throughout Germany destroyed Jewish businesses, cultural institutions, and synagogues. During the attacks, more than 1,300 people were killed. Additionally, more than 30,000 Jewish men were taken into “protective custody” and incarcerated in concentration camps.

The Auschwitz concentration camp was a Nazi camp complex in German-occupied Poland from 1940 to 1945. It consisted of the original Auschwitz camp, the Birkenau extermination camp, the Monowitz labor camp, and about fifty satellite camps. 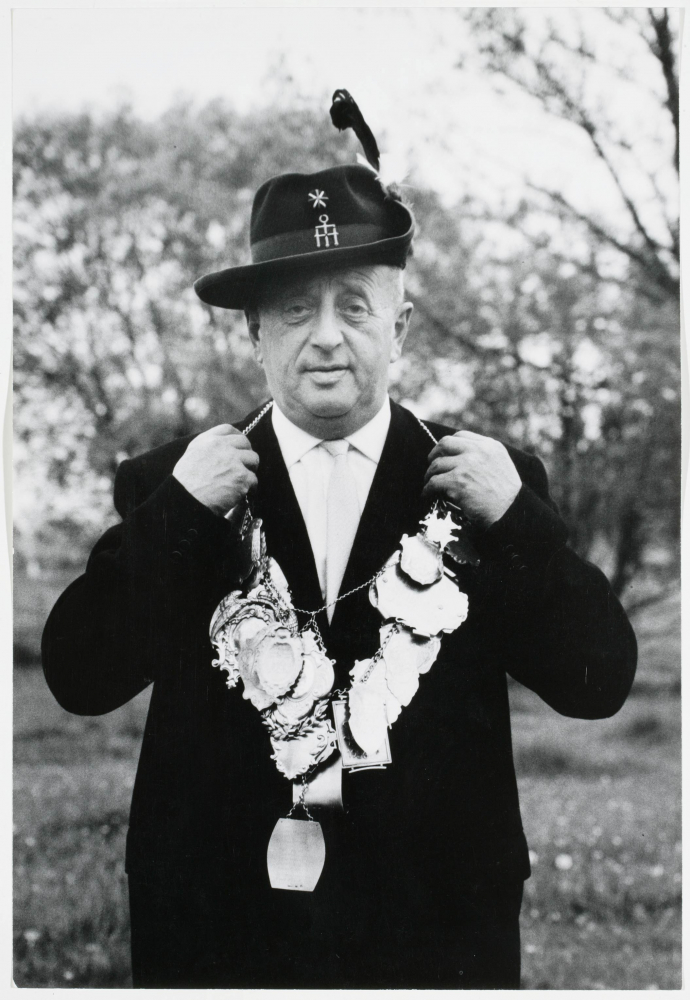