Get: The Ritual Confirmation of a Divorce

This bill of divorce, called a get, is from the collection of the rabbi Dr. Julius Jakobovits (1886–1947). It certifies Siegfried Leopold’s divorce from his wife Resi, née Heim. According to Jewish law, a marriage is only annulled when a bill of divorce is drawn up and presented by the husband to his wife. The get itself does not constitute formal confirmation of the divorce, which is only finalized when the document is given to the wife. The get is written by an expert scribe at the rabbinical court after the husband has stated his wishes.

The bill of divorce is subject to a number of conditions governing its form, material, and script. It must be written with a goose quill in pure black ink on parchment or paper. The document must be taller than it is wide and cannot contain any erasures or holes. The text is composed in square Hebrew script on twelve lines. This number corresponds to the numerical value of the word "get," which consists of the letters gimmel (equal to 3) and tet (equal to 9).

The predefined Aramaic text of the bill of divorce has been in use for centuries. It includes the names of the husband and wife as well as the place and date of the agreement. It must be signed by two witnesses. The central passage reads: "And now I do release, discharge, and divorce you to be on your own, so that you are permitted and have authority over yourself to go and marry any man you desire." After the document is handed over to the wife, it is torn to prevent reuse and given to the head of the rabbinical court. 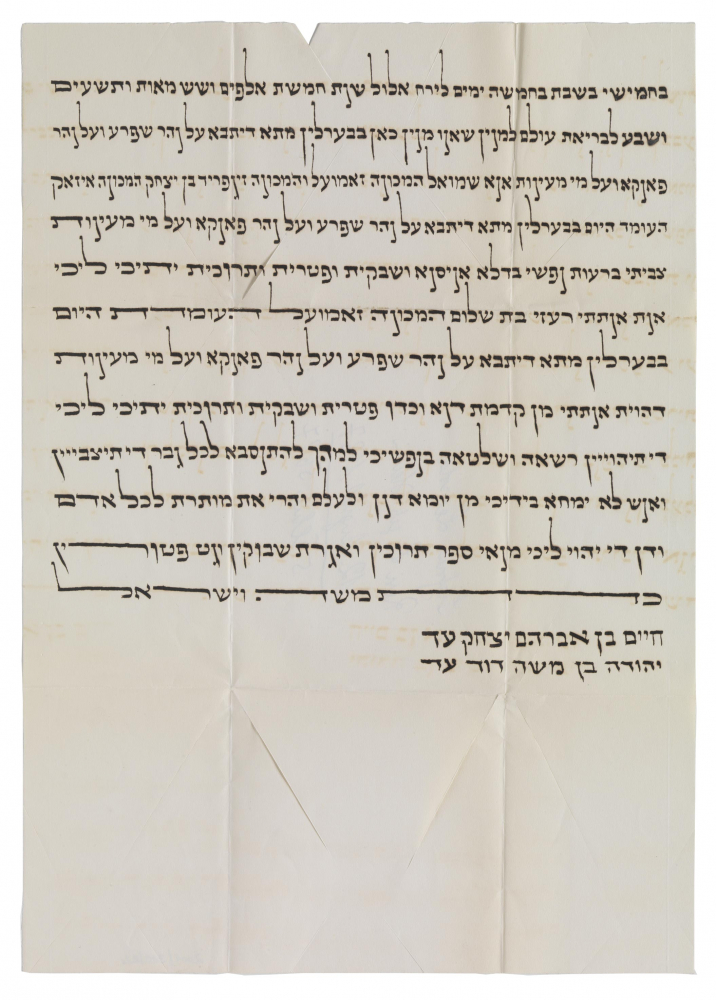 At the time this document was issued, the Hungarian-born Julius Jakobovits was serving as rabbi of the Orthodox synagogue on Kottbuser Ufer (now Fraenkelufer) in Berlin. One year later, in 1938, he emigrated with his family to London. Numerous documents have survived from his ten-year tenure as judge on the Berlin rabbinical court. These are now part of the Jewish Museum Berlin's collections and shed light on his work.

Because the document is so formal, it does not tell us anything about the divorced couple or their reasons for separating. All we know about Resi Leopold is that after her divorce, she returned to live with her parents and that in 1943, she was deported to Auschwitz, where she was murdered. Siegfried Leopold seems to have been a butcher. We have no information about the rest of his life story.