Letter of Complaint by Jakob Steinhardt

The Topography of Violence project documents destroyed cemeteries, boycotted businesses, and physical attacks on Jews. However, our archives also contain cases of psychological violence. One example is the psychological terror inflicted on the Steinhardt family, which Jakob Steinhardt described in a letter.

Steinhardt was a well-known expressionist painter and graphic artist who was arrested by the SA in March 1933. At the time, he was living in a loft at Pariser Strasse 27 in the Wilmersdorf district of Berlin with his wife, Minni, and their nine-year-old daughter Josefa. He had moved there twelve years earlier. 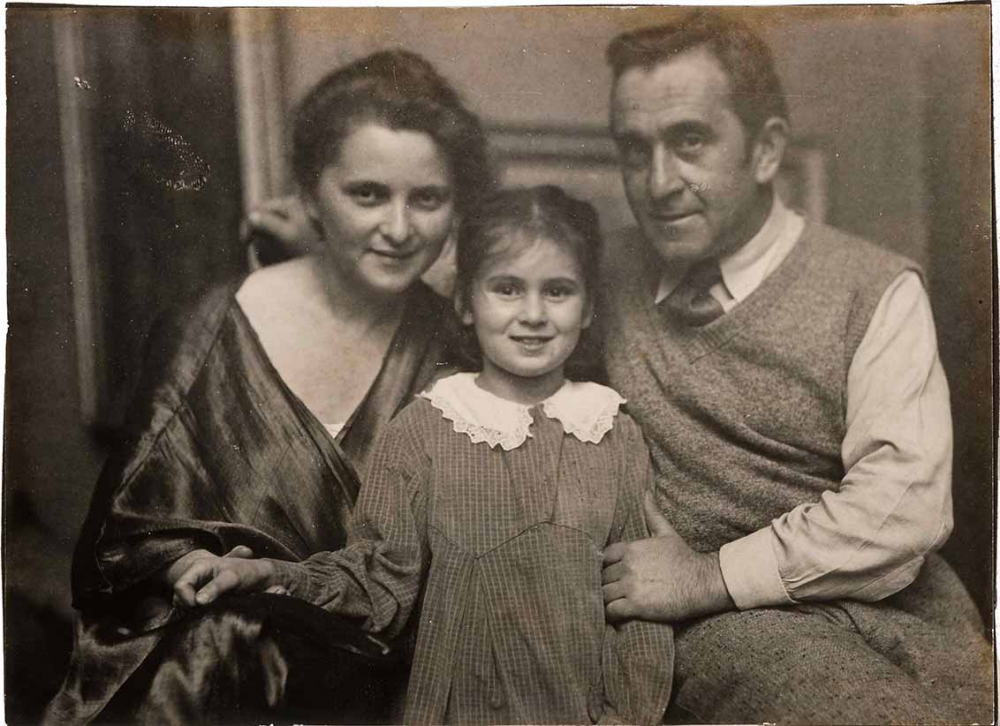 After fleeing Germany, Steinhardt wrote a letter of complaint that was evidently meant for the police authorities in Berlin. In it he describes his arrest and expresses his surprise at “how it is possible that entirely powerless and apolitical people can be subjected to such treatment.”

Complete Draft of the Letter 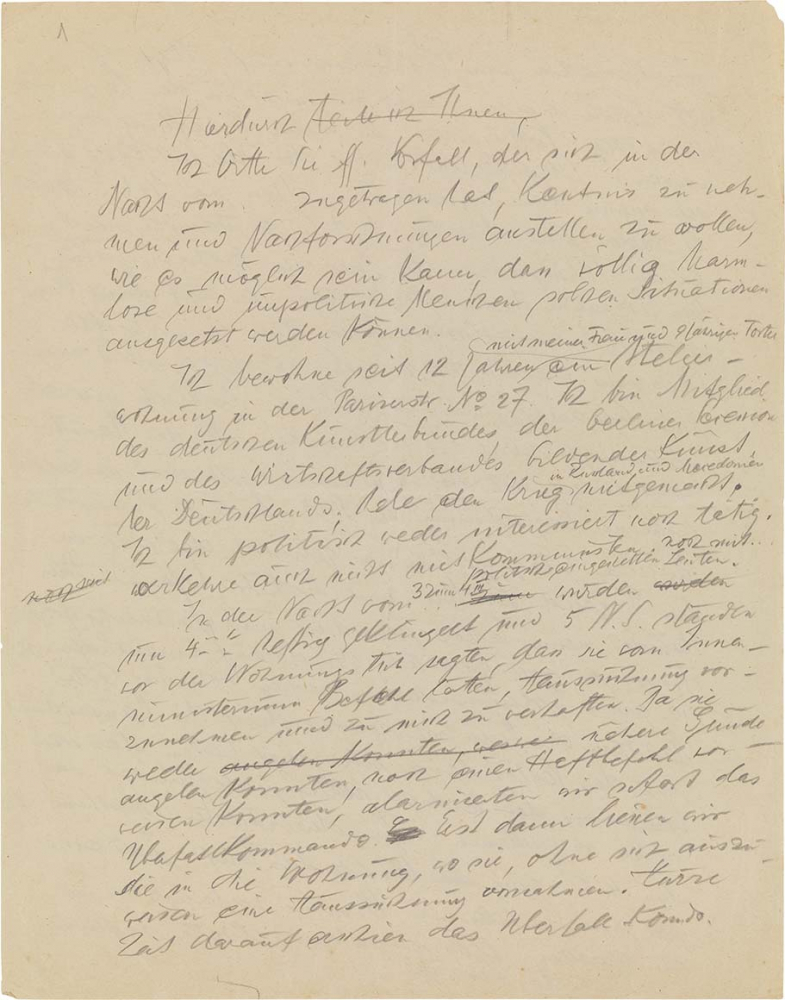 Translation page 1
I would like to ask you to take note of the following incident, which occurred during the night of. . .and to investigate how it is possible that entirely powerless and apolitical people can be subjected to such situations.

I have lived with my wife and nine-year-old daughter in a live-in studio at Pariserstrasse 27 for twelve years. I am a member of the Association of German Artists, the Berlin Secession and the Economic Board of Visual Artists in Germany. I fought in Russia and Macedonia during the war. I am not interested or active in politics. I do not associate with communists or politically minded people.

During the night of 3 March, our doorbell was rung loudly at 4 a.m. and I opened up to find five National Socialists standing in front of the apartment door. They told me they had orders from the Interior Ministry to search our apartment and arrest me. Since they were not able to give any more specific reasons for my arrest or produce a warrant, we immediately alerted the burglary squad. Only then did we let them into our apartment. The men conducted their search and shortly afterward the burglary squad arrived 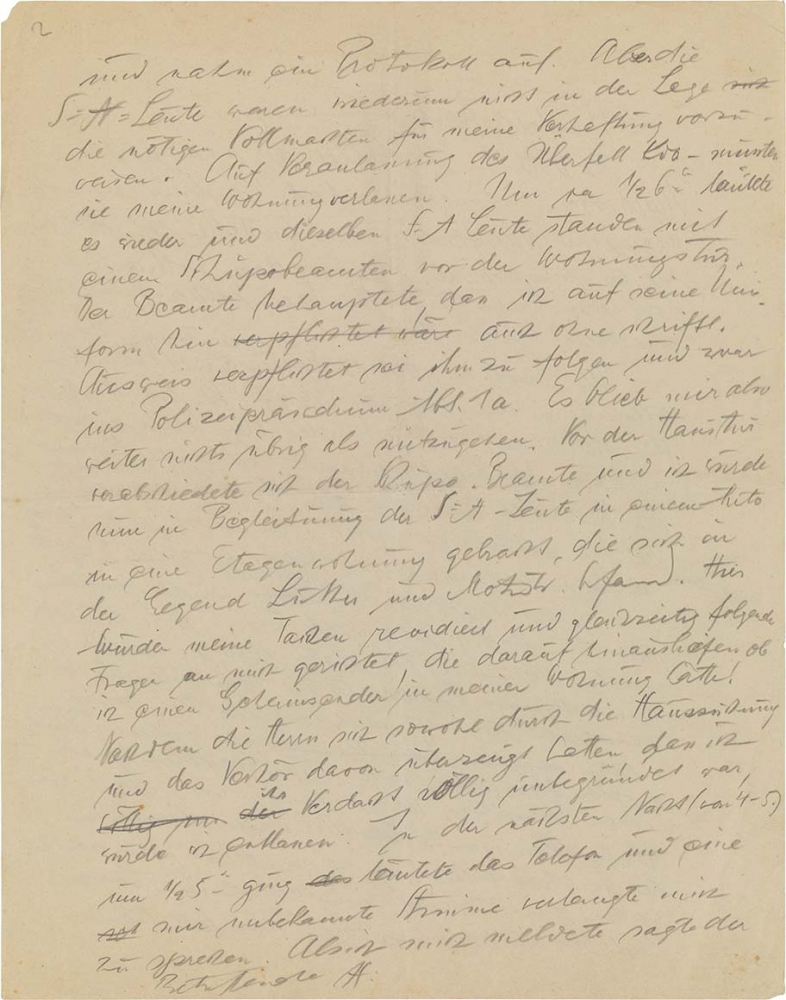 Translation page 2
and took down information. The SA men were once again unable to present the necessary authorization for my arrest and, at the insistence of the burglary squad, left the apartment. At around six thirty, the bell rang again and the same SA men were standing at the door, this time accompanied by an officer from the Criminal Investigations Department. Without presenting any official papers, this officer claimed that his mere presence in uniform meant that I was obligated to accompany him to Police Headquarters, Department 1A. I saw no alternative but to do as he said. However, once we were outside the building, the officer left and the SA men drove me to an apartment in the neighborhood of Luther Strasse and Motzstrasse. Here my pockets were checked and I was asked a number of questions that all boiled down to whether I had a private radio transmitter in my apartment! After they had satisfied themselves on the basis of this interrogation and their search that their suspicions were unfounded, I was released. However, at five thirty the next morning (4 March) the phone rang and a voice I did not recognize asked to speak to me. When I identified myself, the person said [illegible]: 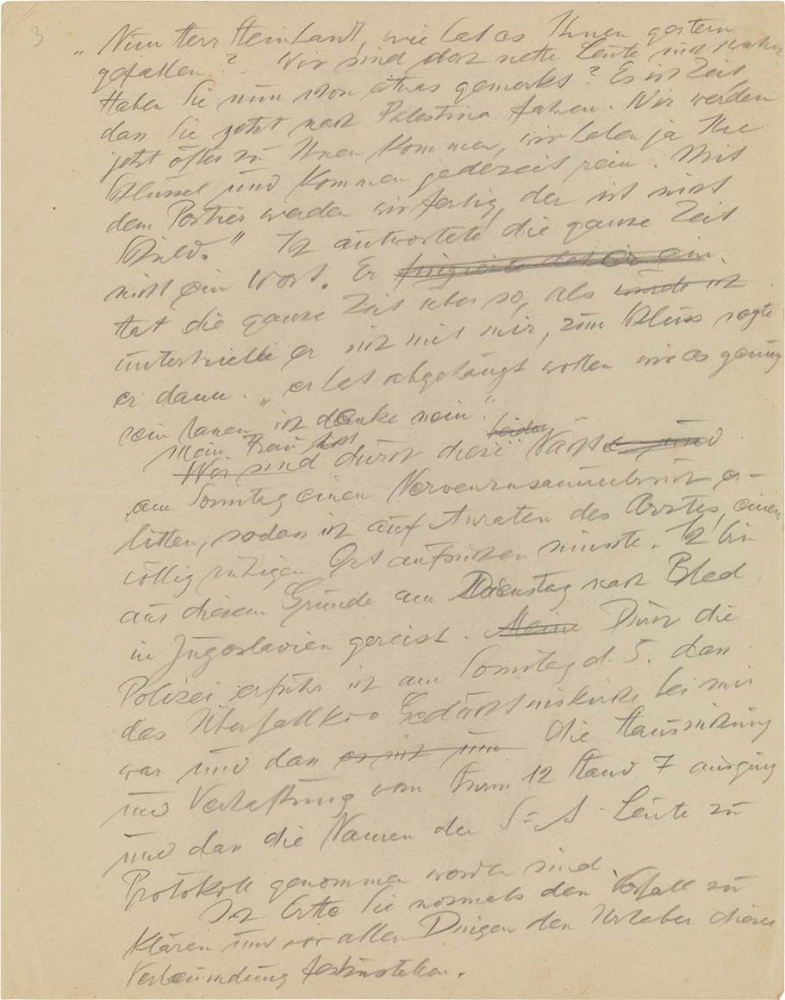 Translation page 3
“Well, Mr. Steinhardt, how did you like things yesterday? We’re all very nice people, aren’t we? Have you realized now that it’s time you left for Palestine? We’re going to pay you frequent visits from now on. We have your keys and can get in at any time we like. We’ll be able to deal with the doorman – he’s no threat.” I didn’t say a word the whole time, although he acted as if he were really conversing with me. Finally I heard him say, “He hung up. Do we want to let the matter rest? I don’t think we should.”

As a result of the incidents on both these nights, my wife suffered a nervous breakdown on Sunday. I was advised by a doctor to go to a quiet place and traveled to Bled in Yugoslavia on Tuesday. On Sunday the 5th I learned from the police that the Memorial Church Burglary Squad was at my apartment and that the search and arrest had been carried out by the unit “Storm12, Standard 7.” I also learned that the names of the SA men had been taken down.

I would like to ask you once again to investigate this matter and above all to determine who is responsible for this defamation. 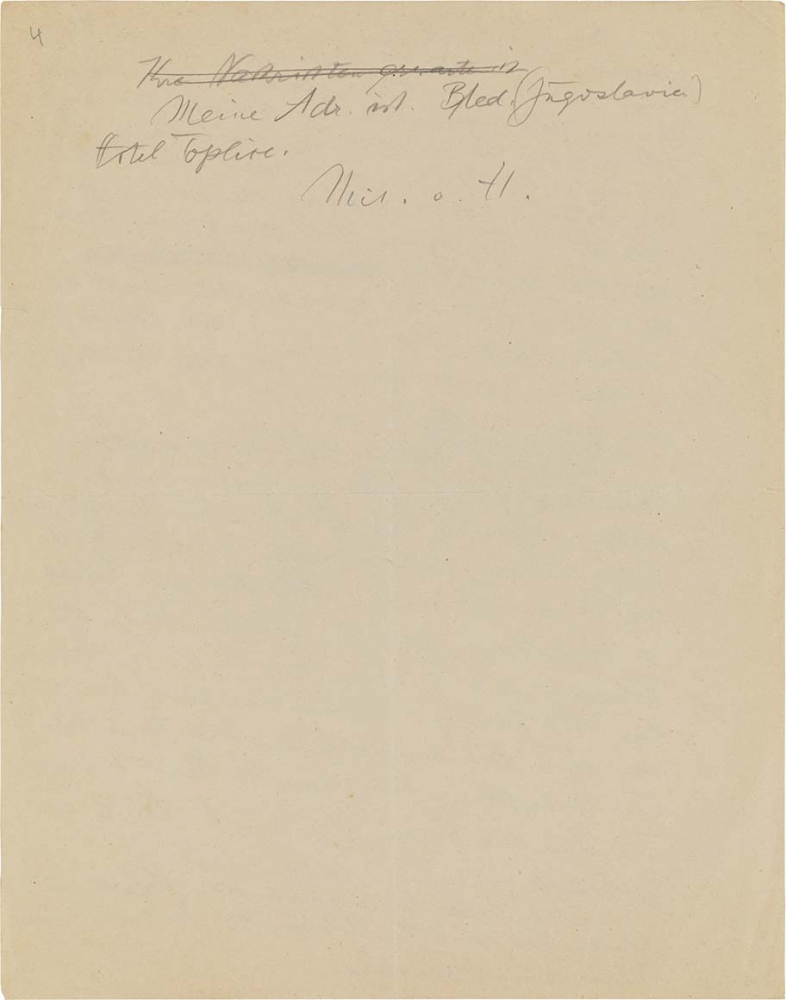 He was forced to flee by the events in the night of March 3. At four in the morning, five SA troopers repeatedly rang his doorbell. When Steinhardt opened up, they told him they had orders to search the apartment and arrest him, but did not produce a search warrant or arrest warrant.

Steinhardt called the police, who, upon arriving, forced the SA to leave the apartment. However, the SA troopers had already conducted their search. One and a half hours later, they showed up again, arrested Steinhardt in the presence of a member of the uniformed police (Schutzpolizei), and interrogated him in a private apartment. He was accused of operating a secret radio station, but was released a few hours later.

The following night, he was called and threatened on the phone:

“Well, Mr. Steinhardt, how did you like things yesterday? We’re very nice people, aren’t we? Have you realized now that it’s time you left for Palestine? We’re going to pay you frequent visits in the future. We have your keys and can get in any time we like. We’ll be able to deal with the doorman – he’s no threat.”

The following day, due to the extremely stressful situation and the SA’s threat to show up at any time, Minni Steinhardt suffered a nervous breakdown. Her doctor recommended that she leave the city, and on 7 March, the family traveled to the Yugoslavian spa town of Bled, where they remained a few days and Jakob Steinhardt wrote his letter. It is unclear whether he actually sent it to the Berlin police.

In mid-March the Steinhardts finally left for Palestine and settled in Jerusalem. 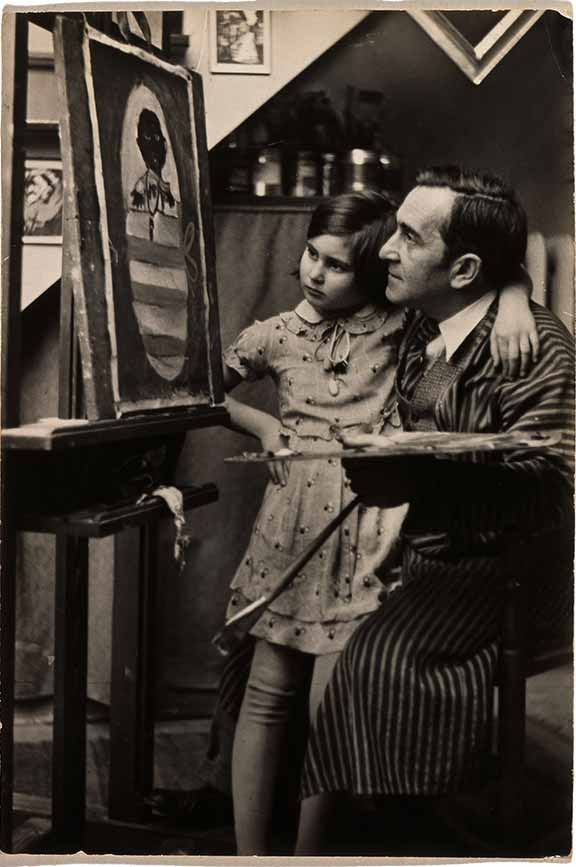