A Joyful Occasion
for the Lustig Family

Our collection on Jewish life in Germany is enriched by many wedding albums. They give us a fascinating glimpse into the private space of family celebrations and show how people have remembered their wedding celebrations.

One prize example is the wedding album of Paula and Bernhard Lustig. Rather than photographs, this album assembles the guests’ table place cards, a celebratory song performed by the sister of the bride, Hanna Futter, and many other mementos. 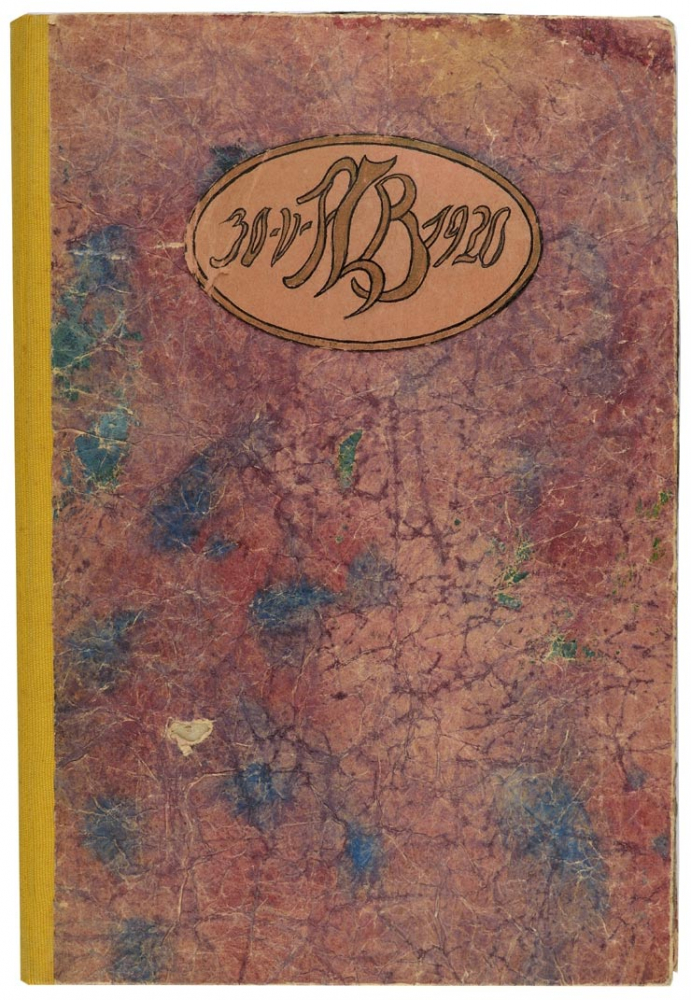 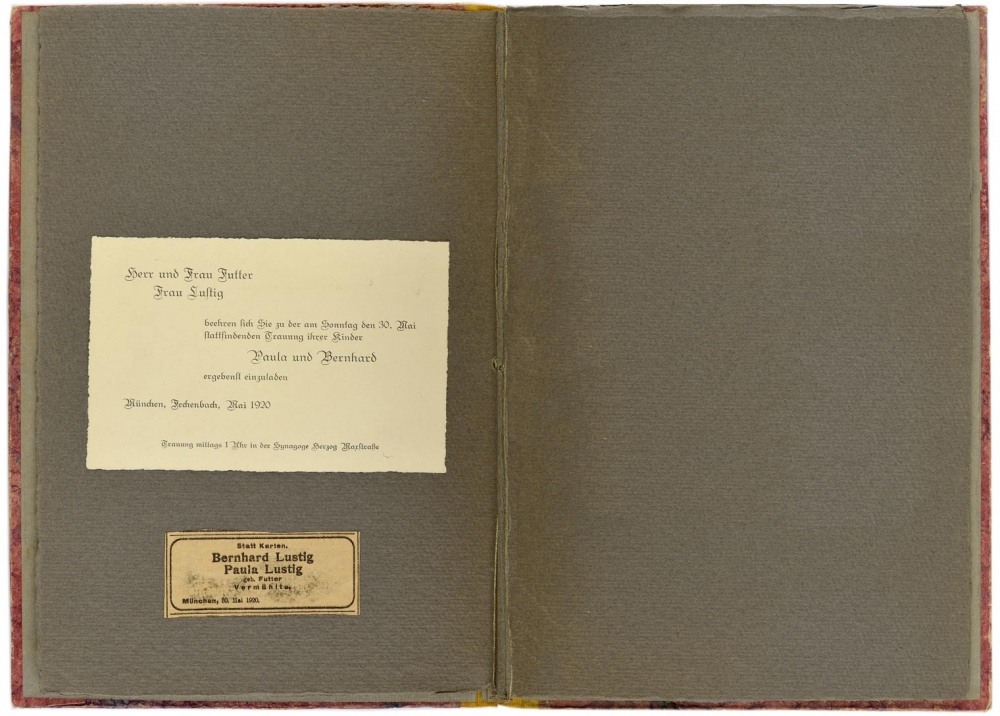 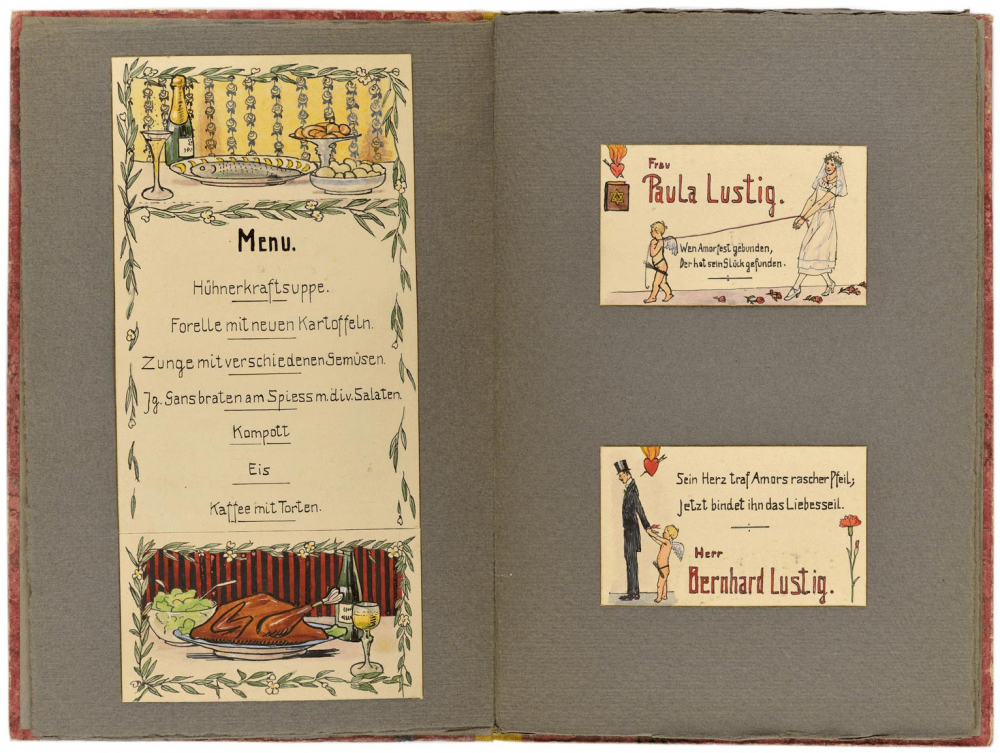 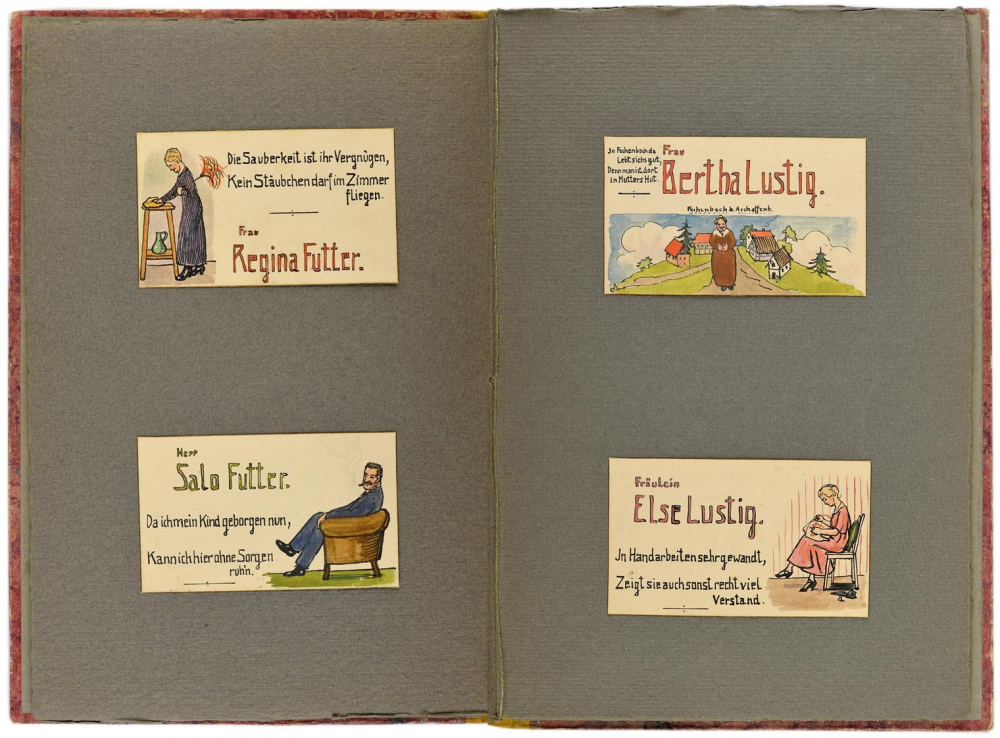 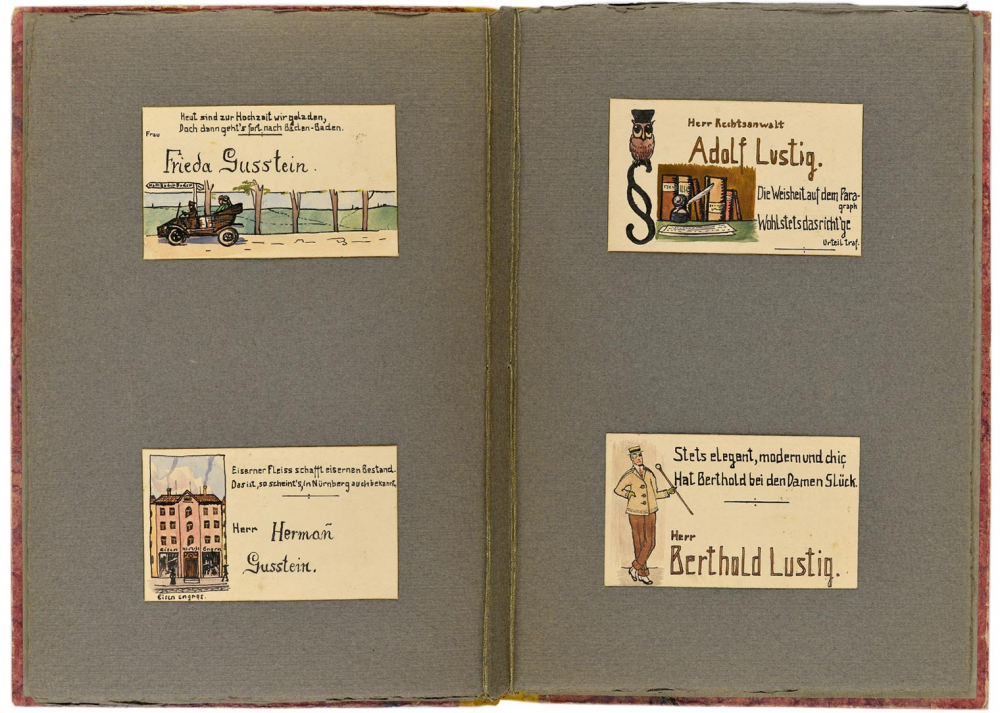 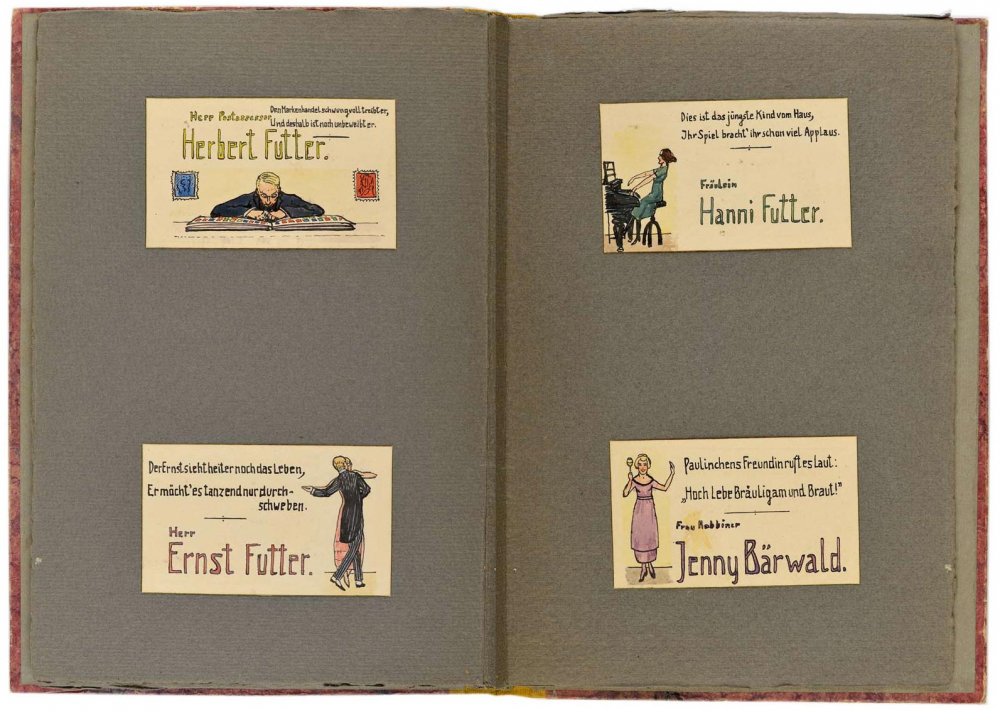 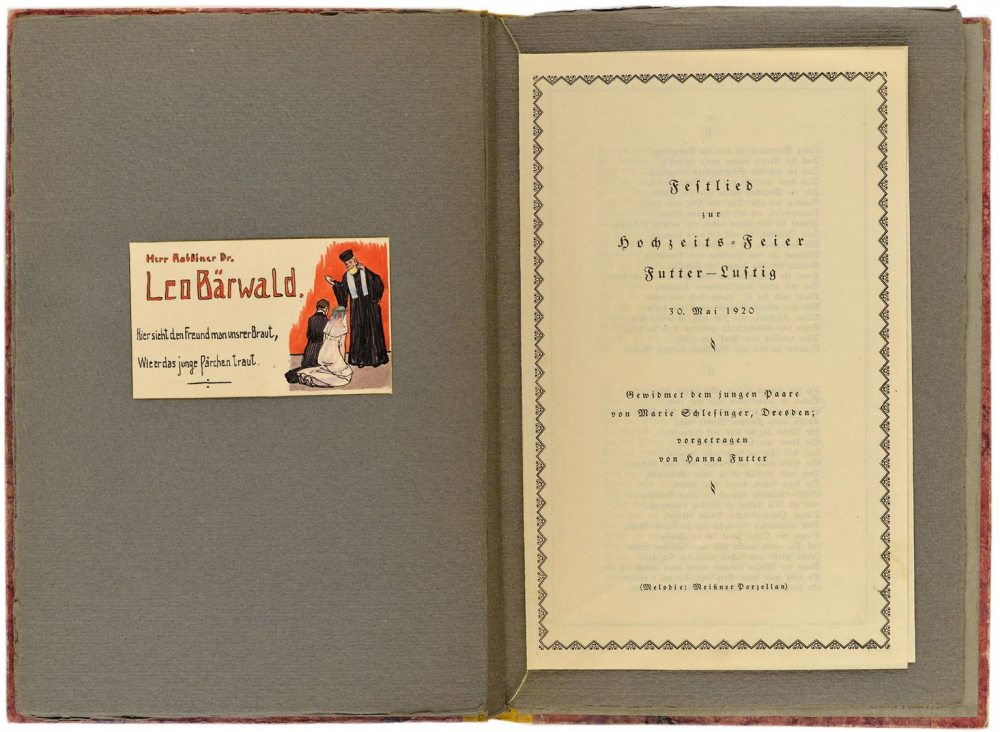 Place card and cover page of the “Celebratory Song for the Futter-Lustig Wedding Party, 30 May 1920.” Dedicated to the young couple, by Marie Schlesinger of Dresden; performed by Hanna Futter (to the tune of “Meißner Porzellan”), Lustig wedding album, about 1920; Jewish Museum Berlin, gift of Arie Ron, photo: Oliver Strat 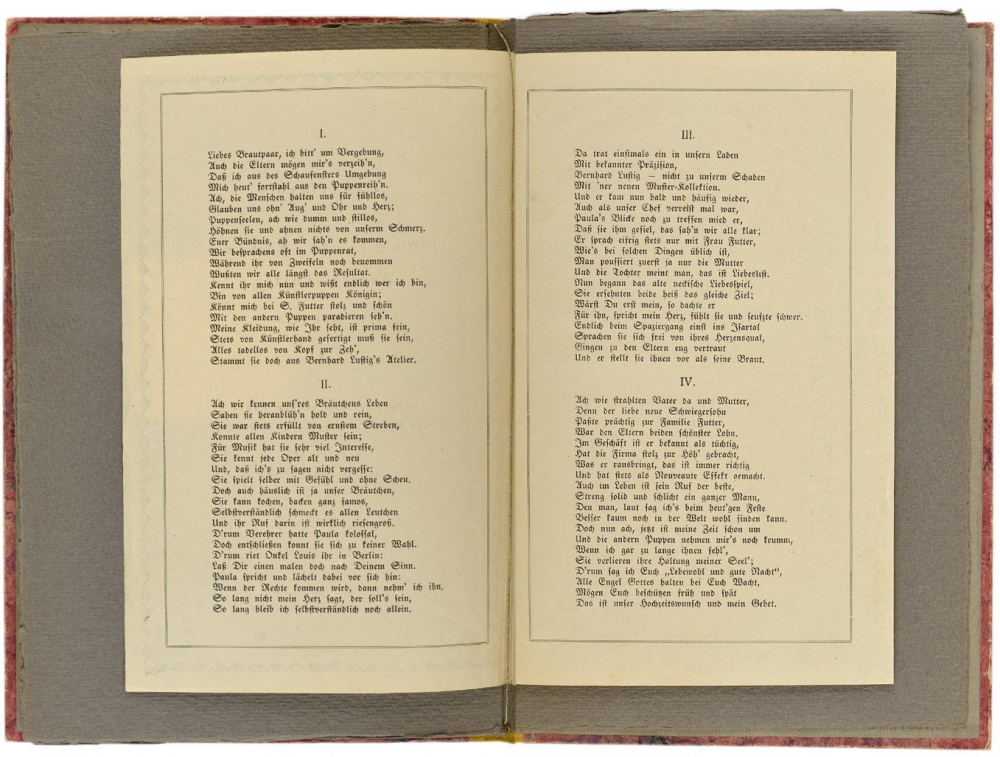 “Celebratory song for the Futter-Lustig Wedding Party, 30 May 1920. Written in the young couple’s honor by Marie Schlesinger of Dresden; performed by Hanna Futter (to the tune of “Meißner Porzellan”), Lustig wedding album, about 1920; Jewish Museum Berlin, gift of Arie Ron, photo: Oliver Stratz 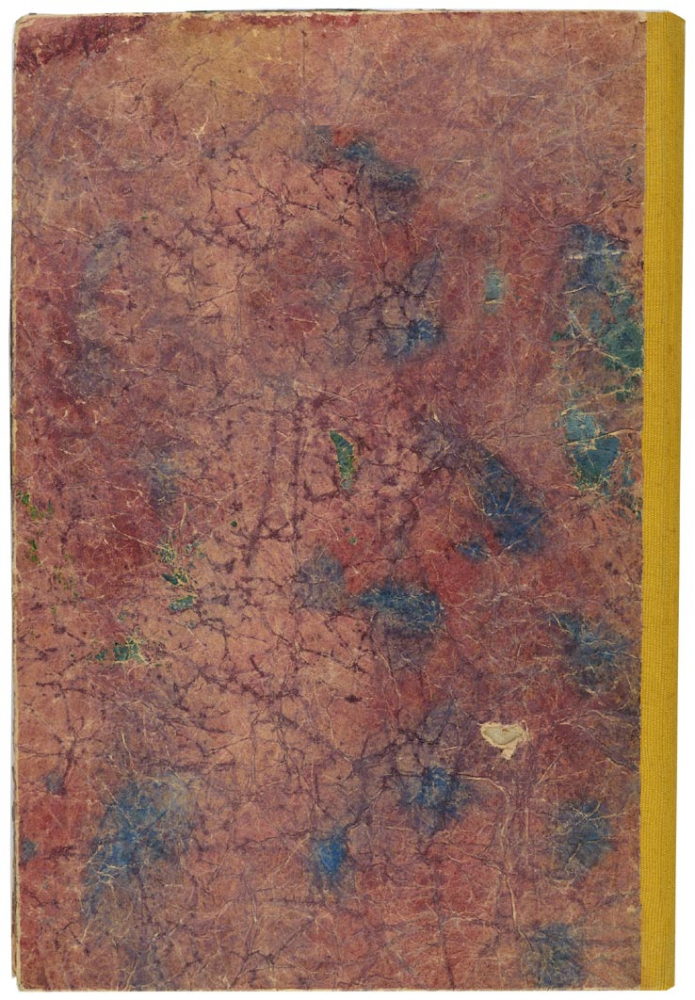 On Sunday, 30 May 1920, Bernhard Lustig and Paula Futter said their vows in Munich. Rabbi Leo Baerwald, whose wife was one of the bride’s close friends, officiated in the main synagogue on Herzog-Max-Strasse.

At the wedding party, the Lustigs lived up to their name, which means fun or funny in German. The attendees sang humorous drinking songs and gave speeches.

The lovingly designed place cards, pasted into the album, presented the bride and groom and featured a drawing and a funny verse for each guest. 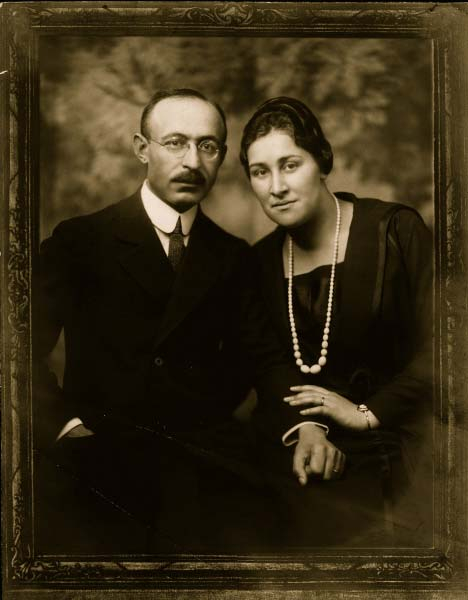 Wedding photo of Bernhard and Paula Lustig, Munich, 30 May 1920; with the kind permission of Arie Ron, Jerusalem 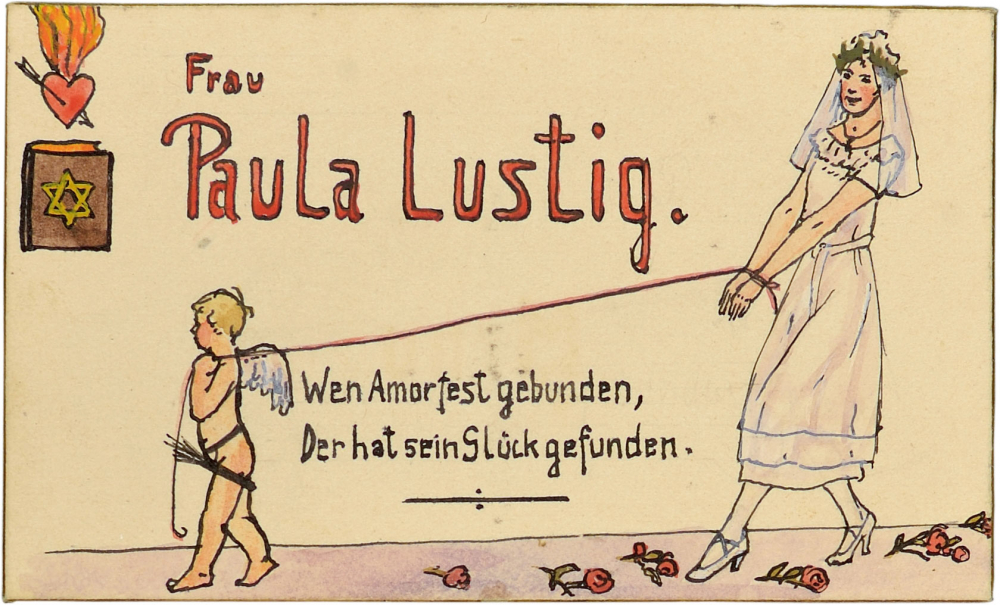 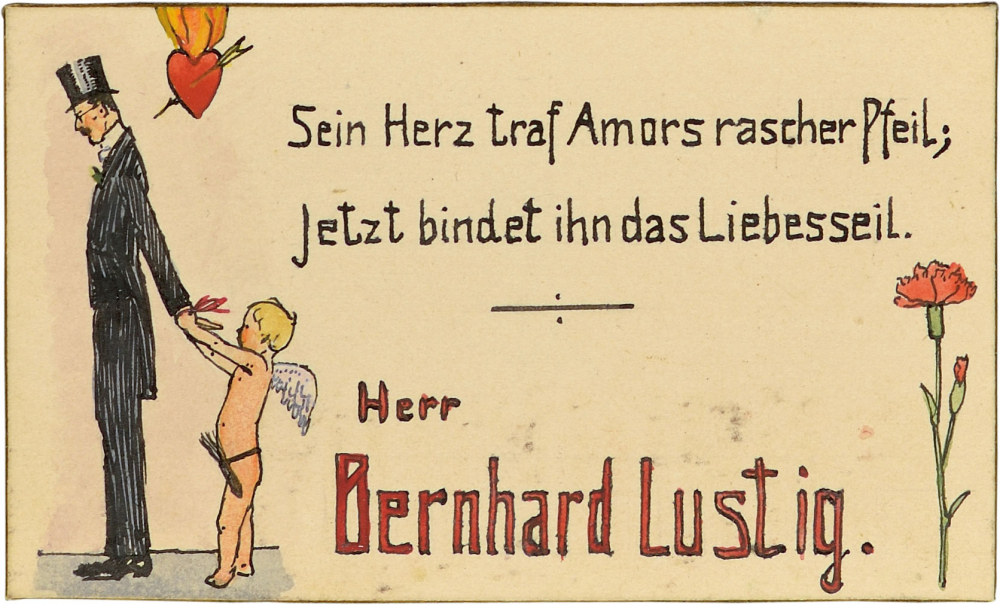 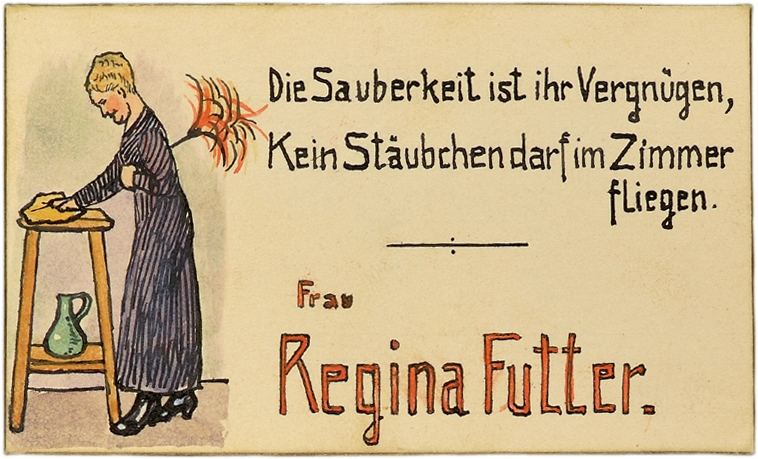 Regina Futter's place card
"Cleanliness is her delight,
Let no dust dare in her house take flight."
Regina Futter née Schlesinger was the mother of the bride. 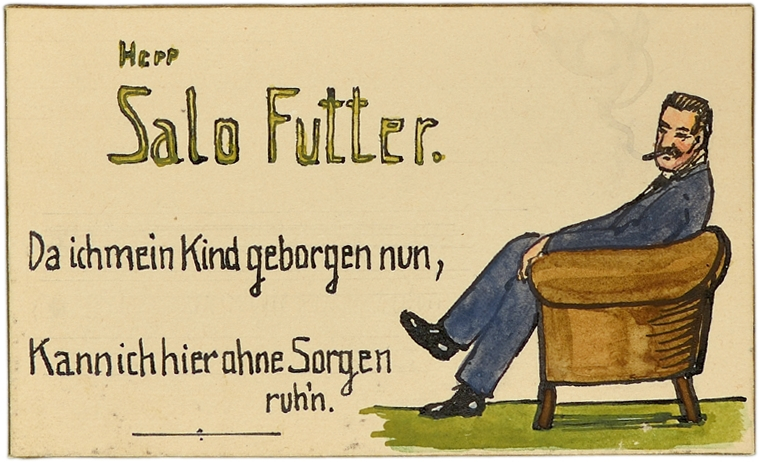 Salo Futter's place card
"Now my daughter’s made her nest,
This armchair knows my heart doth rest.".
Salo (short for Samuel) Futter was the father of the bride, a businessman. The family lived at Pettenbeckstrasse 6 in Munich. 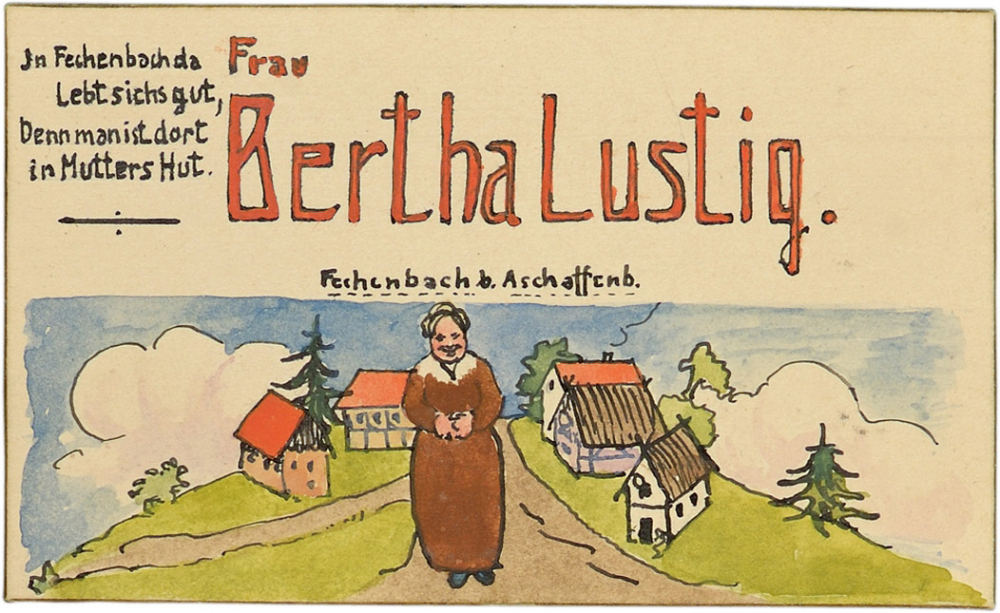 Bertha Lustig's place card (1859–1929)
"In Fechenbach you live like a king,
Bertha Lustig geb. Selig was the mother of the groom. She had been married to Isaak Lustig, who had died in 1906 at age 49. She lived in Fechenbach, in Lower Franconia. 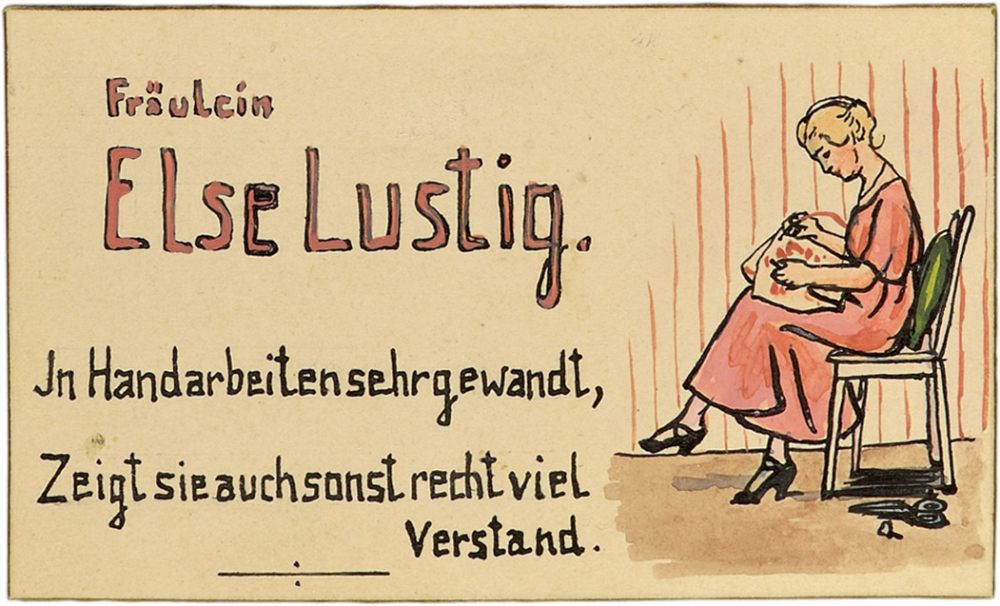 Else Lustig's place card (1895–1976)
"Incomparable at making lace,
Is common sense yet her greatest grace."
Else Lustig, the younger sister of Bernhard Lustig, emigrated to Palestine in the 1930s. 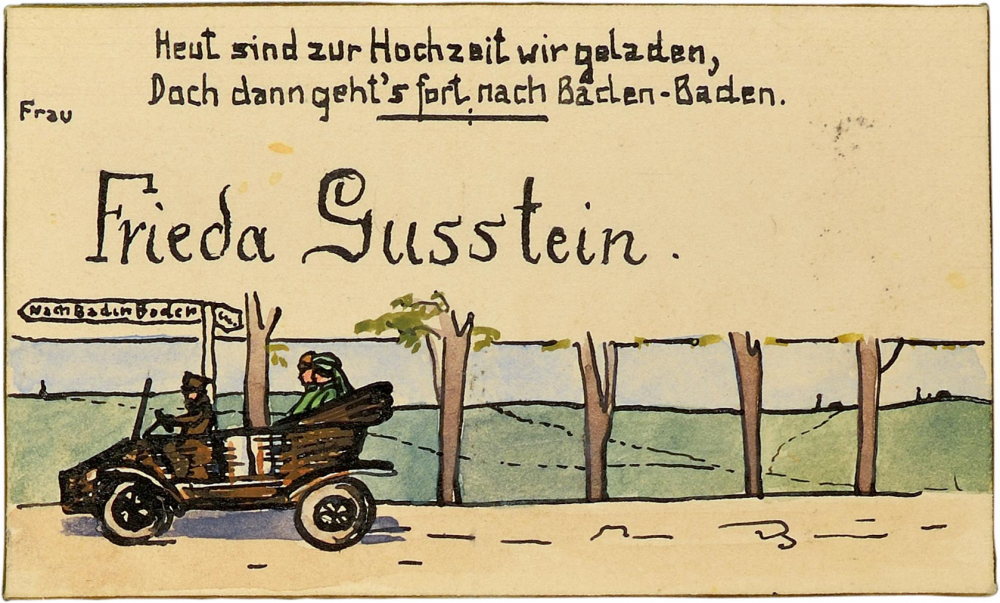 Frieda Gusstein's place card (1890–1941)
"Today a wedding our hearts will gladden,
Frieda Gusstein née Lustig was the groom’s younger sister. She was married to Hermann Gusstein (1881–1941), who came from Fürth. The couple lived in Nuremberg, where Hermann ran a store selling iron goods. 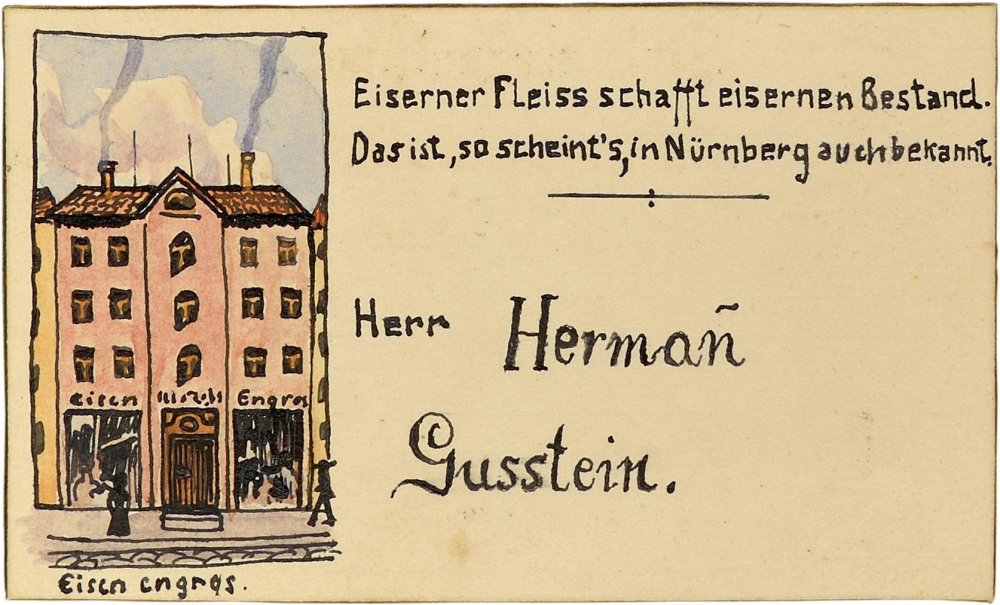 Hermann Gusstein's place card (1881–1941)
"An iron will builds lasting stock.
None would in Nurnberg this motto mock."
Hermann Gusstein and his wife Frieda were deported to the Riga-Jungferndorf concentration camp on 29 November 1941, where they were murdered. 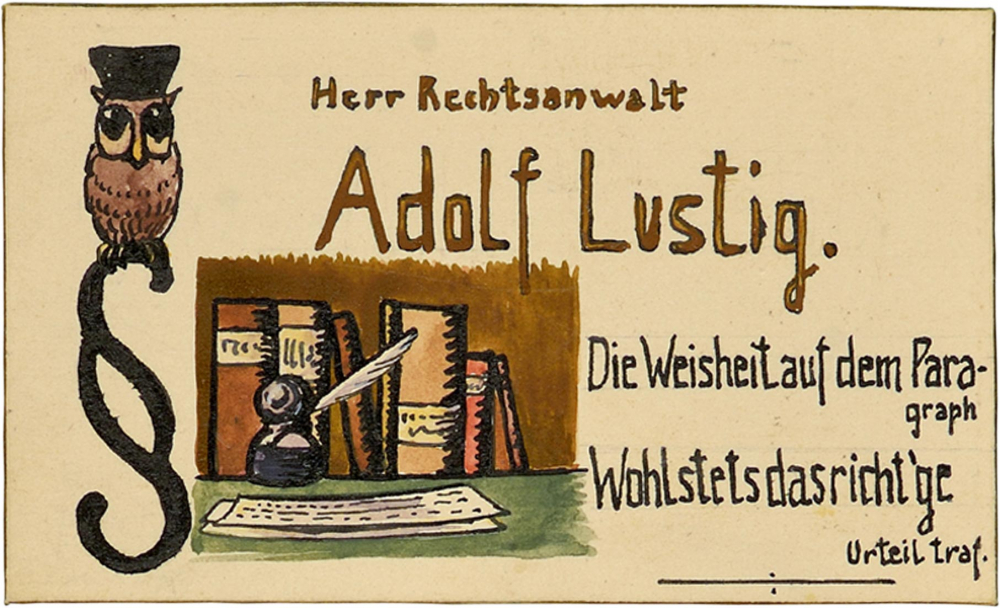 Adolf Lustig's place card (1892–1962)
"Wisdom interpreted by the book
Error for judgment ne’er once mistook."
Bernhard Lustig’s brother Adolf, a lawyer, emigrated to Australia in June 1938. Before that, he (and many other Jews) earned his doctorate, from the University of Würzburg. 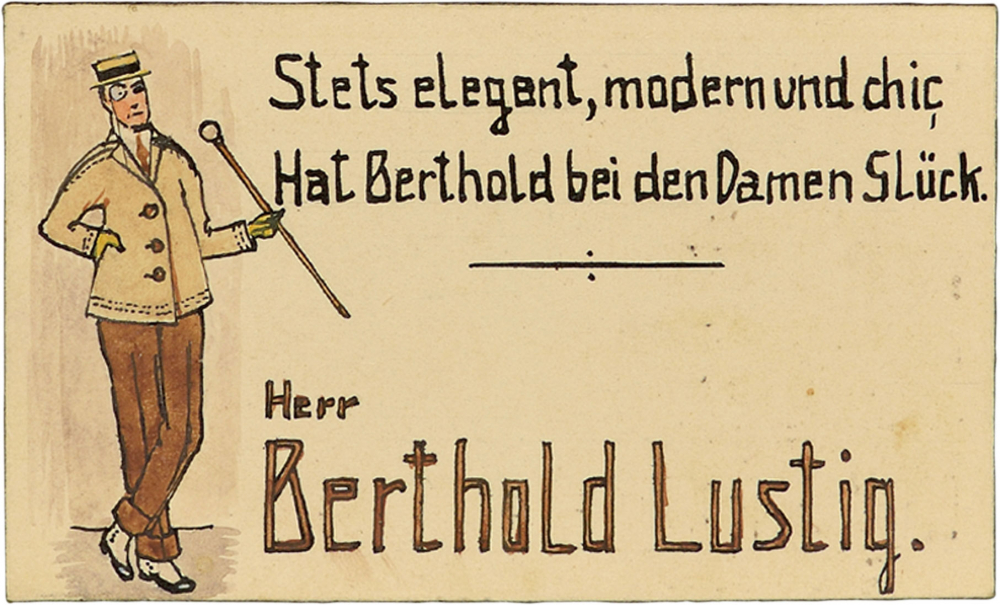 Berthold Lustig's place card (1886–1931)
"Ever elegant, chic, contemporary
His way with the fair sex is legendary."
Berthold Lustig, the groom’s younger brother, was a businessmen. He died young in 1931. 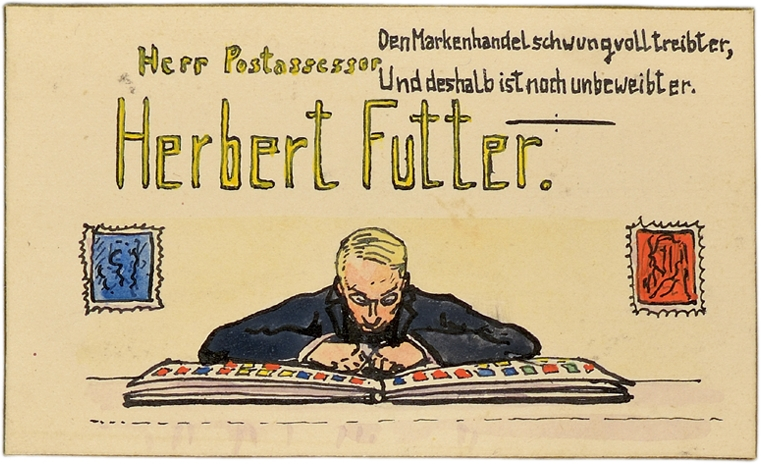 Herbert Futter's place card (1889–1966)
"A philatelist leads a life of Sisyphos,
Thus our Bert remains, though handsome, Mrs.-less."
Herbert Futter, the bride’s older brother, emigrated to Shanghai in 1938 with his wife, and then moved onward to the United States in 1947. Because Shanghai was the only place in the world that did not require a visa, many German Jews took this route. But for most emigrants, Shanghai was only a stopover point. 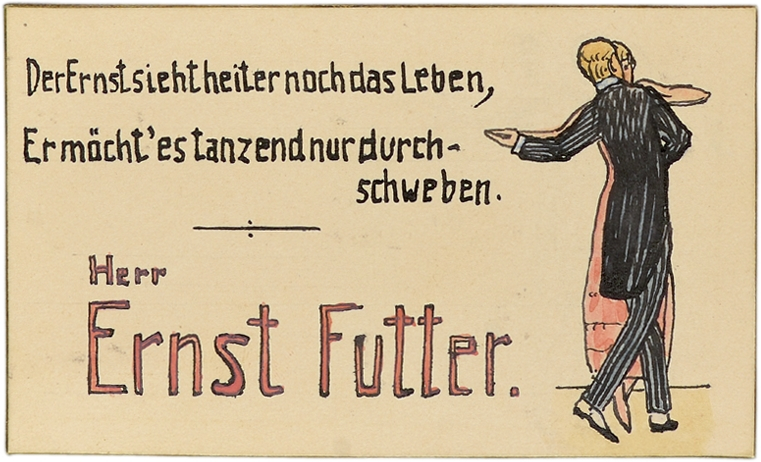 Ernst Futter's place card (born 1900)
"Earnest though he be, his life is gay,
Floating on music, he’d dance it away."
Ernst Futter was one of the bride’s brothers. He emigrated to Palestine in 1934 with his wife and daughter. 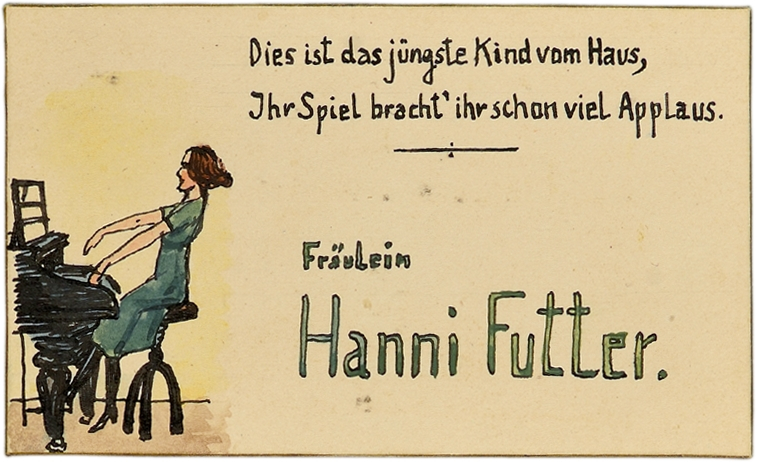 Hanni Futter's place card (born 1904)
"There’s the last of Ma’s and Pa’s,
Hear the thunderous applause."
The bride’s youngest sister, Johanna Futter, went by the nickname Hanni. She was very musical and performed a drinking song at the wedding party. She likewise escaped to Palestine shortly after the Nazis took power. 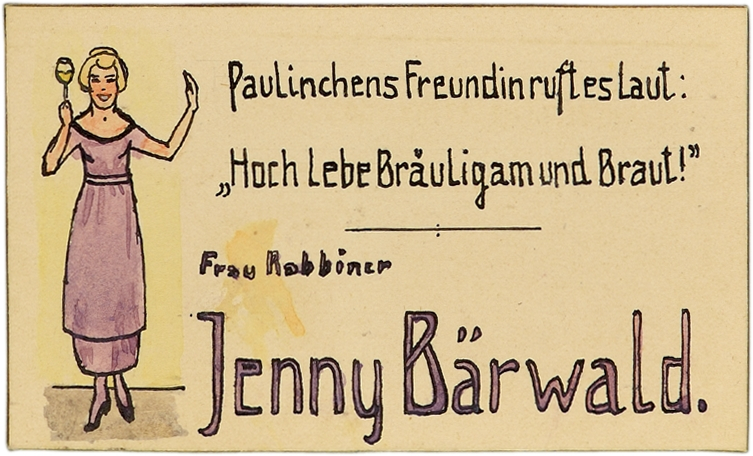 Jenny Baerwald's place card (1886–1949)
"The bridesmaid shouts as she steps aside:
'Long live the groom, long live the bride!'”
Jenny Baerwald née Blumenthal was a friend of the bride and the wife of the city rabbi of Munich. Rabbiners. 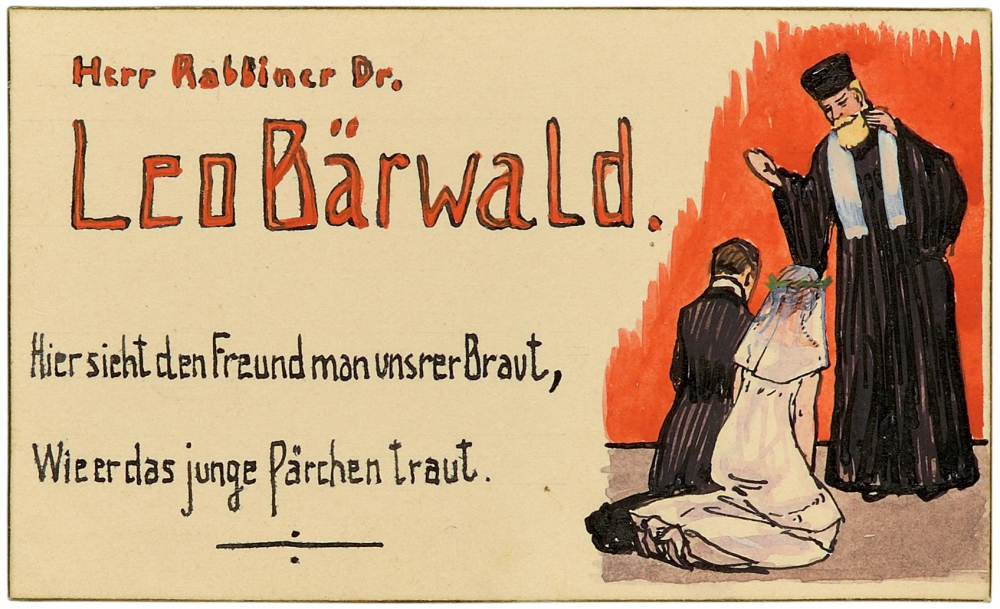 Rabbi Dr. Leo Baerwald's place card (1883–1970)
"Here we see how the bride’s dear friend,
Has the pair swear fidelity unto the end."
Until he emigrated from Germany, Leo Baerwald was the rabbi of the main synagogue in Munich. During the November Pogrom, he was arrested and detained at Dachau Concentration Camp. In 1940, he managed to escape to the US. Until 1955, he served as the rabbi of the Beth Hillel Congregation in New York, which included many German-Jewish immigrants as members.

The invitation, a newspaper announcement, and the dinner menu in the album reveal even more about this special day in the life of the new Mr. and Mrs. Lustig. 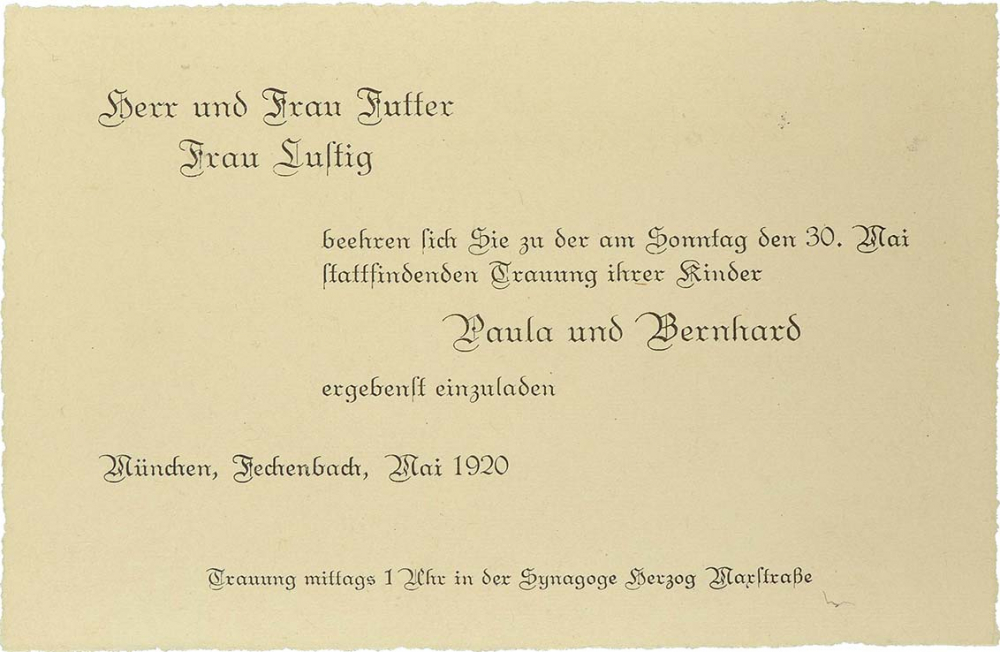 To celebrate the occasion, a festive dinner was served. The artfully designed menu reflects a grand and sumptuous feast:

The trout and the goose were also illustrated on the menu alongside champagne bubbling in a flute. Unfortunately, the identity of who designed the menu and the attractive place cards has been lost.

From Munich to Jerusalem

Paula and Bernhard Lustig had four children between 1921 and 1928: Herta, Hans, Walter, and Franz. After the Nazis seized power, the family swiftly made the decision to emigrate. On 25 August 1933, they left Munich for Italy. From there, they took a ship to Palestine in October. They initially stayed in Haifa and later established Jerusalem as their new home.

Like many German immigrants , they changed their last name – from Lustig to Ron. The parents also Hebraicized their four children’s names: Hertha became Chana, Hans changed his name to Jochanan, Walter was renamed Zwi, and their youngest son Franz took the name Arie.

They brought their wedding album along when they emigrated. It was a special memento, and not only for the original Lustig couple themselves. Their children and grandchildren also enjoyed leafing through the album. 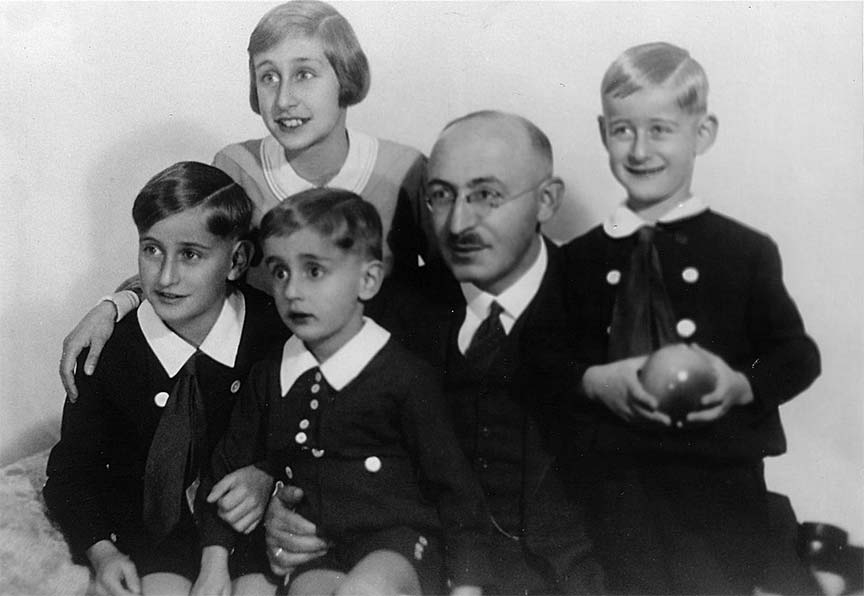 Bernhard Lustig with his four children, Munich, 1932; with the kind permission of Arie Ron, Jerusalem

How It Reached the Museum

In 2013, for our online project 1933: The Beginning of the End of Germany Jewry, we were combing our holdings and the archive of the Leo Baeck Institute in New York for expressive documents from the year 1933. In the end, we chose a letter written by an eleven-year-old boy who was emigrating with his family from Munich to Palestine (read the letter by Hans Lustig here). He told his former teacher about the departure from Germany. What sounds like a carefree family trip in his childish words was actually a final goodbye.

The teacher was Robert Raphael Geis, and the letter was in his surviving papers. It was written by Hans Lustig, the second-oldest son of Paula and Berhard Lustig. We contacted his brother Arie Ron in Jerusalem to find out more about the story of the Lustig family. A year later, he gave his parents’ wedding album to the Jewish Museum Berlin as a gift. We would like to express our gratitude to him and his family here. 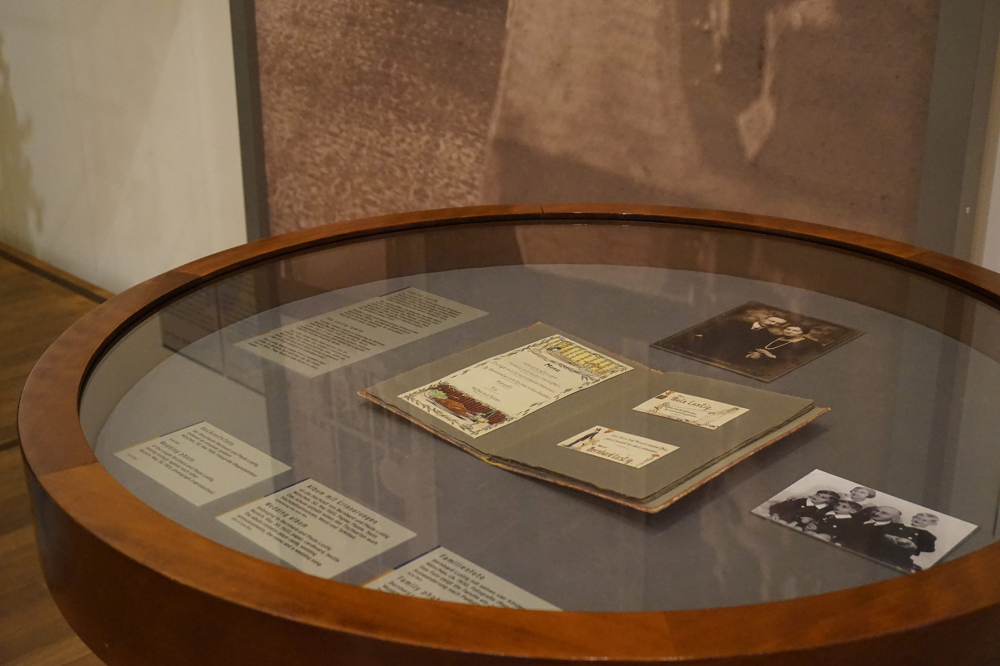 The wedding album was on view in the permanent exhibition of the Jewish Museum Berlin until the end of 2017; photo: Jörg Waßmer 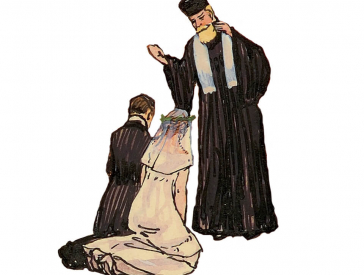 You can find wedding mementos, gifts, and historical photographs in our collections (in German).