A Small Window onto History

A Newly Acquired Passover Haggadah and Its Previous Owners in Kreuzberg

The first Passover Seder will be celebrated soon. All over the world Jews will gather with their family and friends around festively decked tables and partake in the centuries-old tradition of reciting the Haggadah. Its text describes the story of the Israelites’ liberation from slavery in Ancient Egypt and sets forth the order of the evening.

A Haggadah in an online auction recently caught my eye, and I managed to purchase it for a negligible sum for the Jewish Museum Berlin. Published in 1848 in Roedelheim near Frankfurt under the title Erzählung von dem Auszuge Israels aus Egypten an den beiden ersten Pesach-Abenden (An Account of Israel’s Exodus from Egypt on the First Two Evenings of Passover), the book contains the Hebrew version of the Haggadah text, along with its translation into German by Wolf Heidenheim. It is the twentieth edition of the Roedelheimer Haggadah that first appeared in 1822/23, there with the German translation in Hebrew characters. In 1839, the translation first appeared in Roman letters, as is the case with our new acquisition.

The Haggadah is a Jewish text that sets forth the order of the Passover Seder.
More on Wikipedia 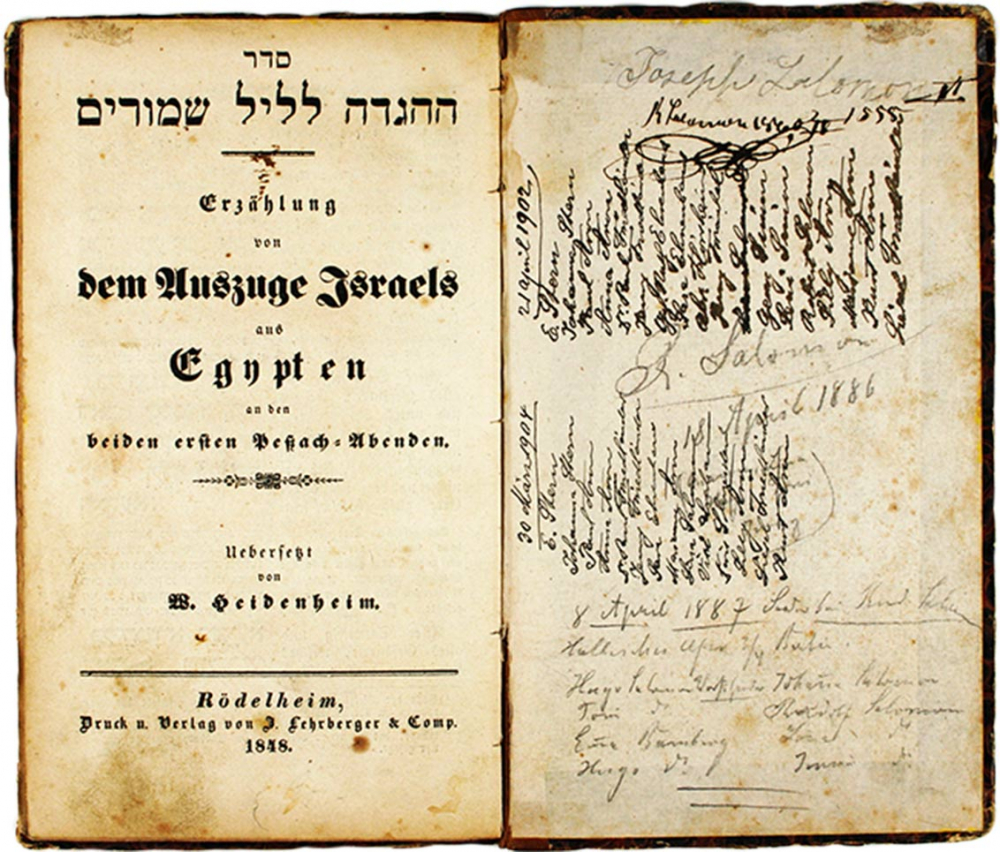 An Account of Israel’s Exodus from Egypt on the First Two Evenings of Passover, published in Rödelheim near Frankfurt, 1848; Jewish Museum Berlin, accession 2014/44/0, photo: Aubrey Pomerance

There is, to be sure, nothing remarkable about this edition from 1848. In contrast to so many Haggadot, it contains no illustrations, which for so many people provide the incentive for creating their own collections. It offers neither a fancy typography, nor commentaries, nor any other special features. The book is not even complete, since the last fifteen pages are missing. It is thus certainly not on account of any formal qualities that our Haggadah holds such allure, but rather due to the handwritten lists which are found on both inside flaps of the book.

These notations record the names of those who attended eight Seder celebrations between the years 1886 and 1904. In and of itself, there is probably nothing exceptional about the existence of such lists, even if this Haggadah is the only one in the Museum’s collection to contain such entries. Yet for us, the most striking fact is that the persons named here celebrated Passover together in the immediate vicinity of the Museum, namely on Hallesches Ufer (a road running along the Landwehr Canal) and in the Hedemannstraße. 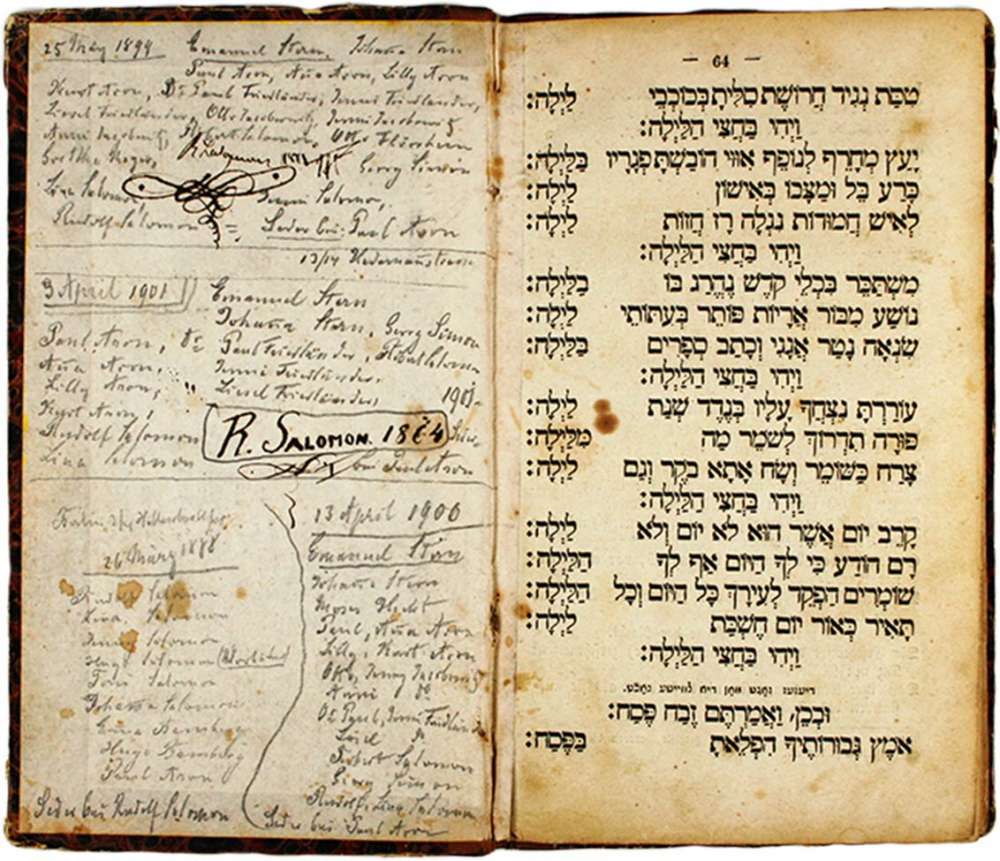 Research on the Mentioned Individuals

Through further research and with the assistance of my colleague Barbara Welker from the Centrum Judaicum, who was able to supply data on burials in the Jewish cemetery at Berlin-Weissensee, it proved possible to more closely identify the majority of the individuals whose names appear in the book. It turns out that we are essentially dealing with three related families, the Arons, the Salomons, and the Sterns.

The first owner of our Haggadah was Joseph Salomon, born in 1818 in Nickenich in the Rhineland. He later gave the book to his son Rudolph, who was born in Aachen in 1848 and who later became co-owner of a mechanical tricot weaving manufactory in Berlin. From 1886 to 1888, the Seders were celebrated in the apartment at Hallesches Ufer 3/4, where Rudolph lived with his wife Lina née Stern, a native of Siegburg. From 1899 to 1901, and probably also in 1902 and 1904, the families gathered for the celebration in the Hedemannstraße 13/14, the home of their niece Anna Aron and her husband Paul. Assembled at the Seder were Anna Aron’s parents, siblings and children, some of Rudolph Salomon’s siblings, and further relatives and friends, some of whom lived very close by. Alongside the basic biographical data of many of the people named in the lists, details of the tragic destinies of certain individuals were also revealed: Anna Aron was deported and murdered in Theresienstadt in 1942, and her son, school inspector Dr. Kurt Aron, in Auschwitz that same year.

A Book of Remembrance

The fate of the Haggadah itself up until its appearance in an online auction will doubtless remain open to conjecture. It is clear, however, that it served the families not only as a book of remembrance of the Exodus from Egypt, but also as a personal keepsake of shared memories that now opens a small window onto their histories. That it will be preserved in a place so close to the apartments where it was read at Passover Seders more than one hundred years ago is a most fortunate coincidence. Further research will hopefully bring additional knowledge to light—and ideally lead to contact with the families’ descendants. 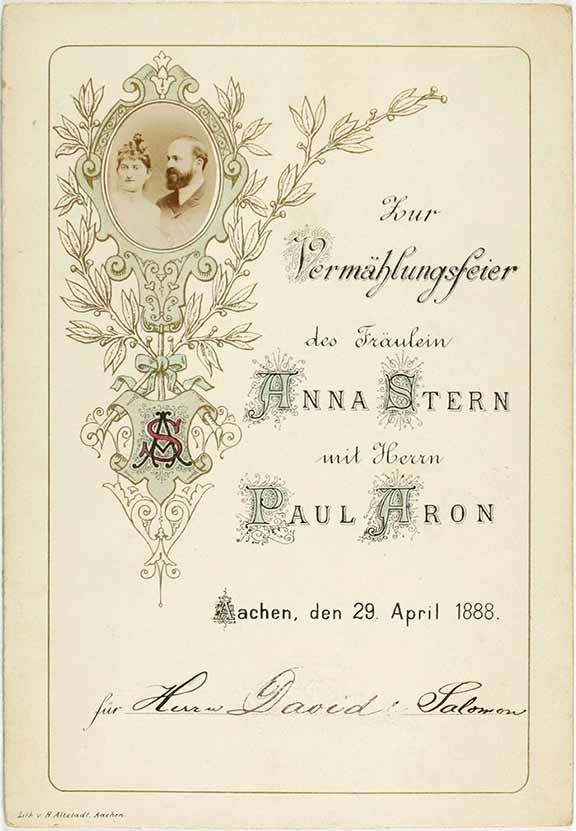 A Visit to Sweden to See the Descendants

Just over two years ago, here on the museum's website, I penned a text describing a Passover Haggada that I had purchased online. At the end of March of this year, I flew to Stockholm to visit Alexander Summerville, the great grandson of Paul Aron, in whose home in the Hedemannstraße 13/14 Passover Seders took place in five of the years for which lists exist in the Haggada. I had received Alexander’s name through two further great grandchildren of Paul Aron, whom I had contacted earlier and whom I also had the pleasure of meeting during my brief stay in the Swedish capital.

Although I had corresponded and spoken with Alexander in advance of my trip, I did not anticipate the richness and scope of materials that he had pertaining to his family history: paintings of his ancestors, linens, clothing and accessories, books, pamphlets, and a large number of documents and many photographs.

Of the eleven individuals whose names appear most often in the lists, documents and/or photographs pertaining to nine were to be found within the collection: Emanuel Stern, the owner of a large cloth factory in Aachen and his wife Johanna née Leven, who travelled annually to Berlin to celebrate Passover with their daughter Anna Aron, her husband Paul and their two children Lilly and Kurt. In attendance at some of the Seders were also the older daughter of the Sterns, Jenny Friedländer with her husband Paul and daughter Liesel, and Johanna Stern’s sister, Caroline Salomon and her husband Rudolph, at whose home the Passover was celebrated in earlier years. 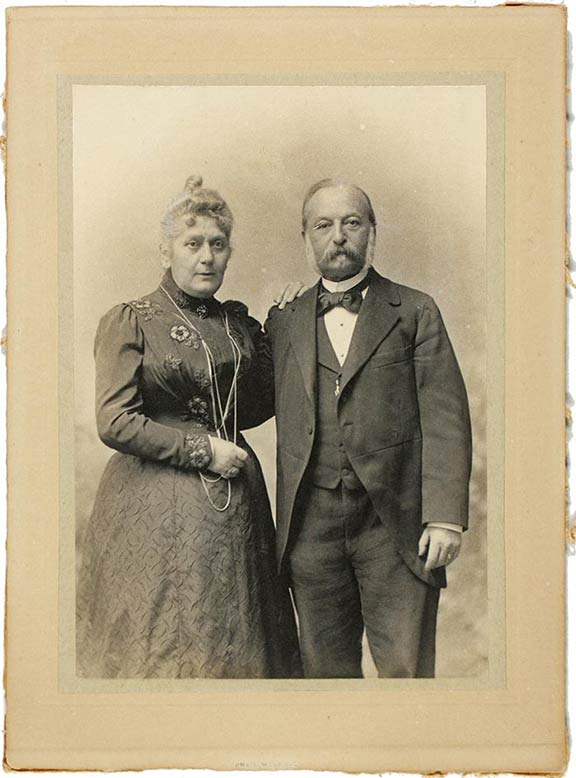 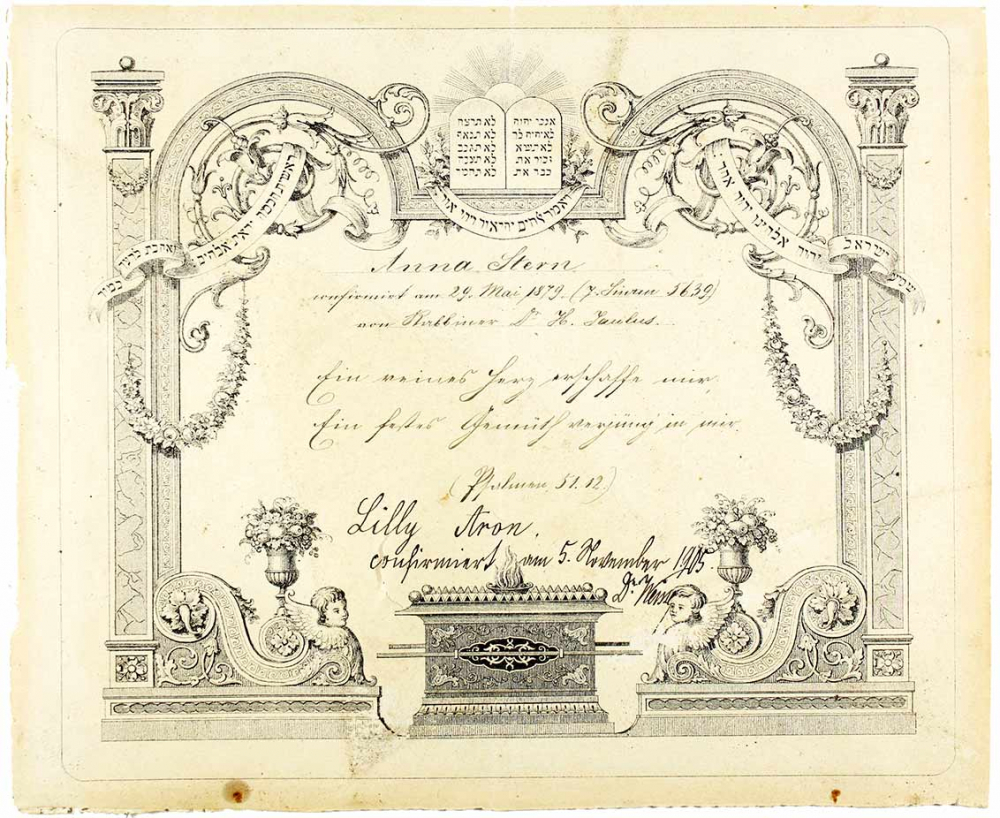 Among the materials that came to the fore and brought to life many of the names listed in the Haggada were the citizenship paper from 1847 for Samuel Aron, the Jewish confirmation certificate for Anna Stern in Aachen in 1879, the invitation to her wedding with Paul Aron in 1888, the small blackboard that Kurt Aron used at school, and a certificate for Liesel Friedländer for her service as a nurse’s assistant during the First World War.

A sizeable portion of the papers portray in detail the career of Kurt Aron as a teacher, his dismissal from the public school system in 1933 and ensuing employment as a teacher at various Jewish schools in Berlin, and his intensive but unsuccessful efforts to leave Germany at the end of the 1930s. Documented is also the refusal of the National Socialists to allow Anna Aron to be reunited with her daughter Lilly in the summer of 1942, despite being granted a visa by the Swedish government, and the deportation and murder of her son Kurt in Auschwitz in December of that year, despite his status of being in a so-called privileged marriage. Overall I spent the better part of two full days viewing and perusing the collection, and experienced thereby a wide range of emotions: delight, surprise, bewilderment, and sadness. 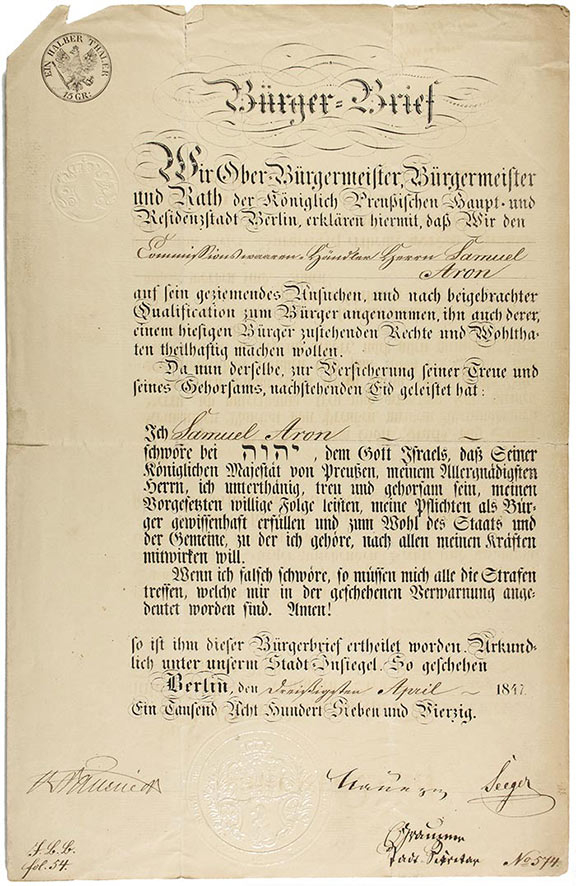 Shortly after my visit, Alexander Summerville entrusted the bulk of the documents and photographs pertaining to the Aron and Stern families to the Jewish Museum Berlin, less than a kilometer away from where his great grandfather Paul celebrated Passover with family members. Here they will be inventoried and made available for use in our exhibitions and archival education program, as well as being accessible to external researchers. The collection is a significant and most welcome addition to our holdings, and we wish to thank to Mr. Summerville for this generous donation. 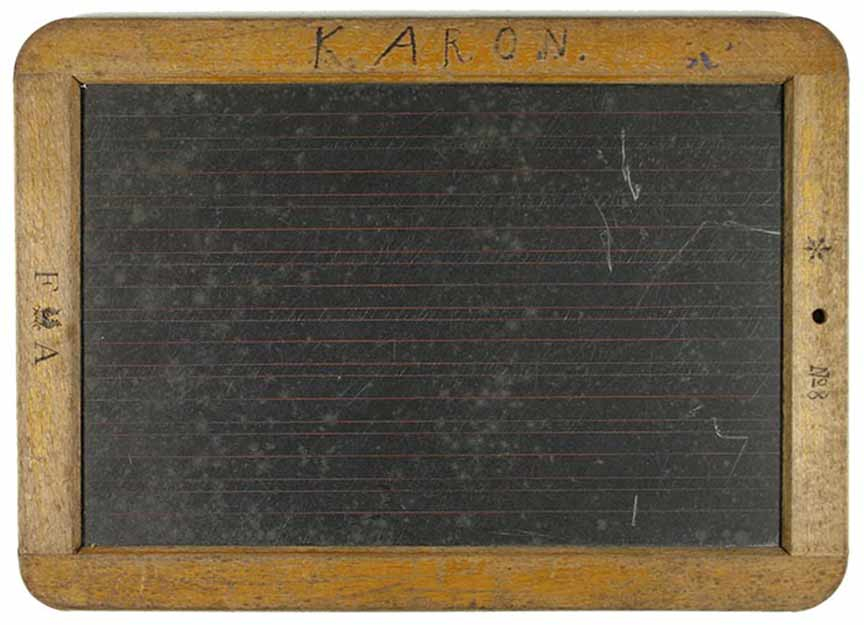 Aubrey Pomerance (2014/2016), A Small Window onto History. A Newly Acquired Passover Haggadah and Its Previous Owners in Kreuzberg.
URL: www.jmberlin.de/en/node/7745

Behind the Scenes: Anecdotes and Exciting Finds while Working with our Collections (18)