“Volunteers can do a project of their own as part of their voluntary service. To that end, they need an idea of what they’d like to do.”

That is written in very general terms among the guidelines of the Voluntary Service Year program, known by its German abbreviation FSJ.

Not only did Anna Justicz, who completed her FSJ in Culture at the Archive of the Jewish Museum Berlin in 2019–20, have a brilliant idea – but she carried out her project very creatively and independently. Inspired by entries in the diaries of Leonie Oliven née Meyer, she created an impressive series of drawings and collages: 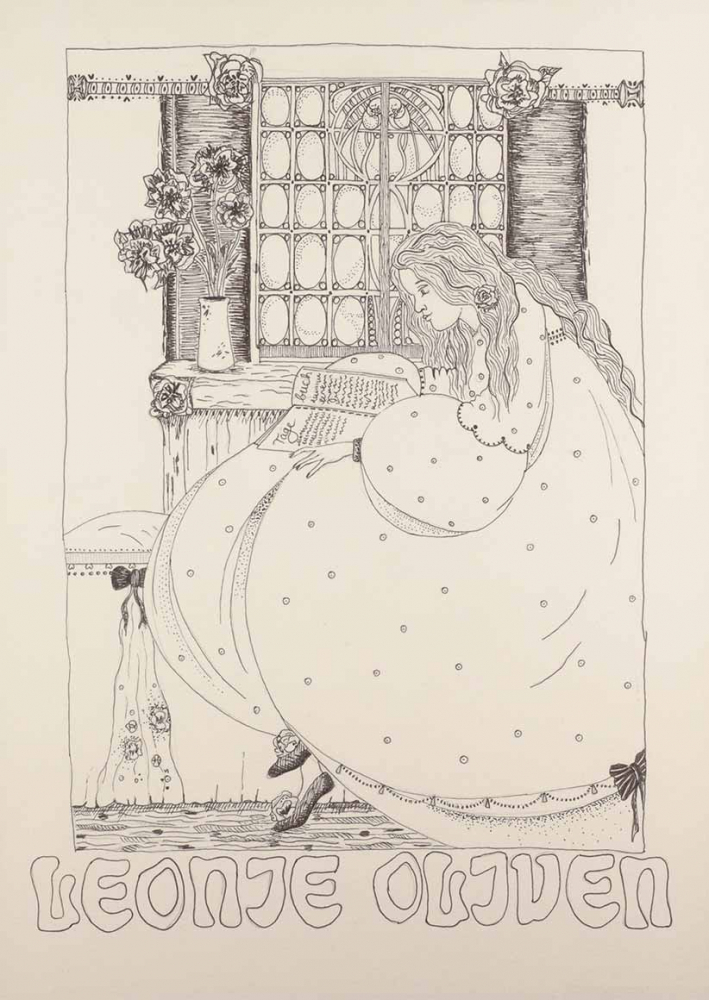 Leonie is sitting in her bedroom as a young girl and – of course – holding a diary! The stylistic references to the Art Nouveau movement serve as a time machine, and with this artistic device Anna immediately brings us back to the turn of the twentieth century. 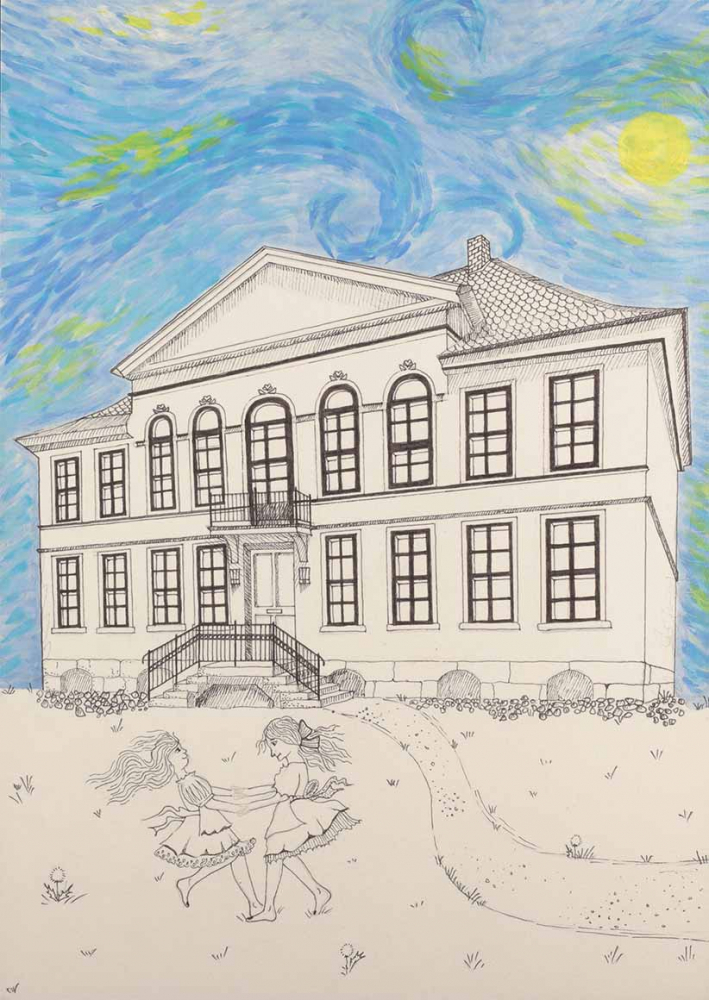 Leonie grew up and came of age in Hanover. In the drawing’s foreground, we see her dancing with her sister Edith. Hanging above it all is an impressionistic sky inspired by Vincent Van Gogh.

Anna drew this mansion based on Leonie’s childhood home on Calenberger Strasse. It is immediately apparent that Leonie comes from an upper-class background; her father owns the bank Ephraim Meyer & Sohn. 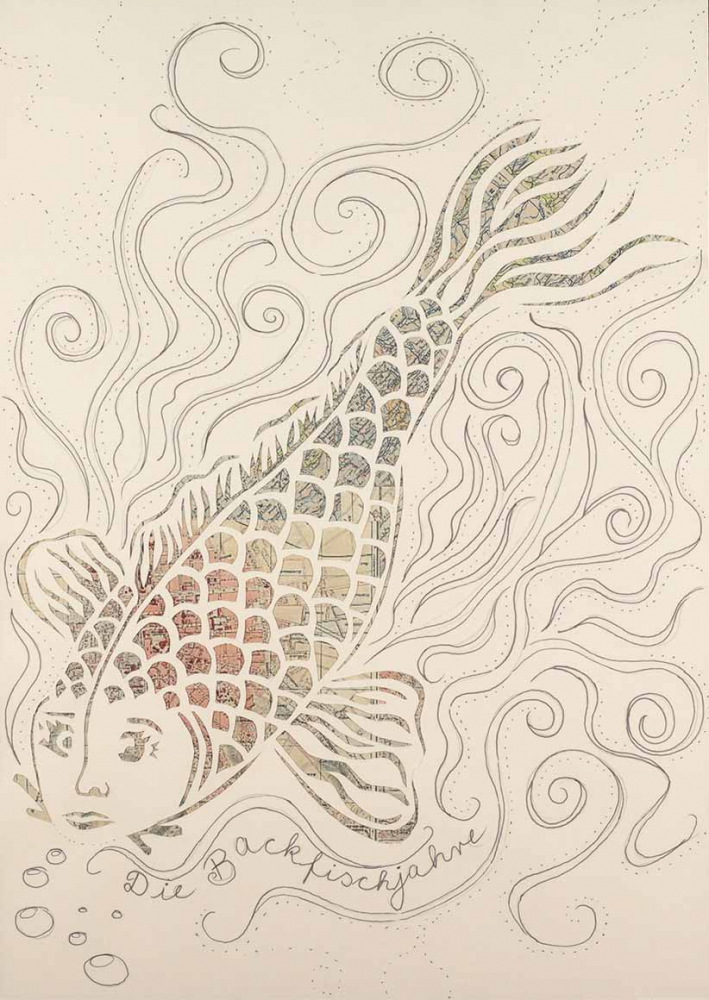 In Leonie’s youth, the word Backfisch (literally “baked fish” in German) was a common expression for an adolescent girl. The Backfischroman genre, typified by novels such as An Obstinate Maid by Emmy von Rhoden, usually propagated traditional female gender roles and usually ended with the wedding of the main character.

Leonie thought deeply and quite critically about the gendered expectations placed on her. In Anna’s eyes, that set Leonie apart from her peers, so she colored in the scales of the fish in her drawing – they even shine! 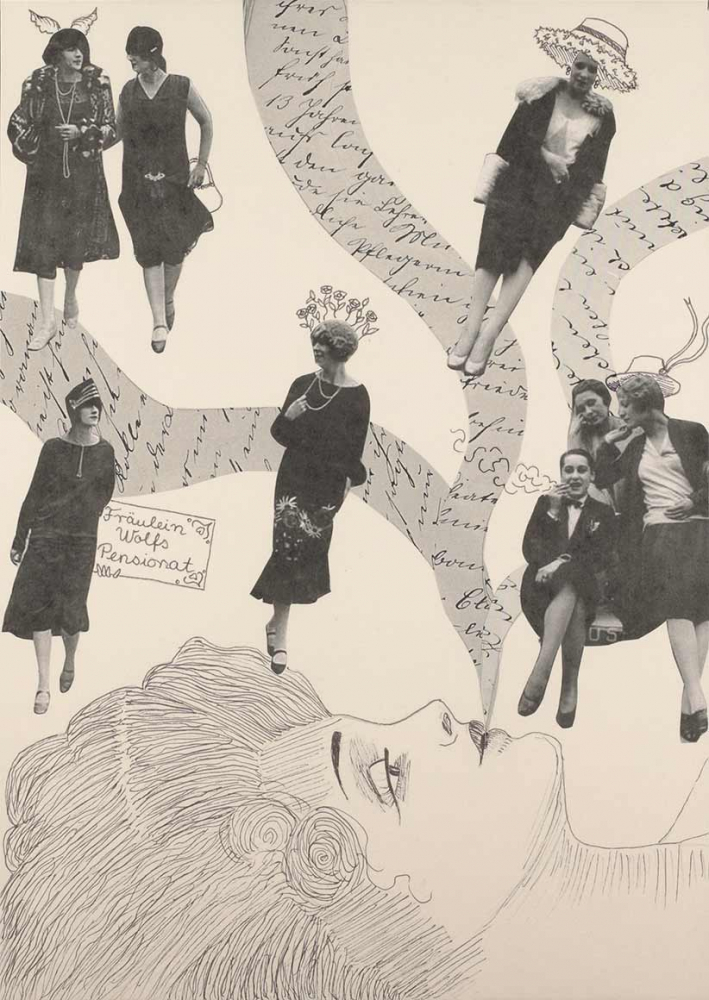 After Leonie finishes her academic schooling at age sixteen, she goes to Miss Hermine Wolff’s Jewish residential finishing school in Wiesbaden. There, she meets upper-class girls from across Germany and some other European countries.

In the fourth volume of her diary, Leonie describes life at the finishing school, her encounters with other girls, but also the conservative values taught there. She repeatedly engages with questions of modern womanhood. In her collage, Anna therefore draws on various illustrations of the “New Woman.” 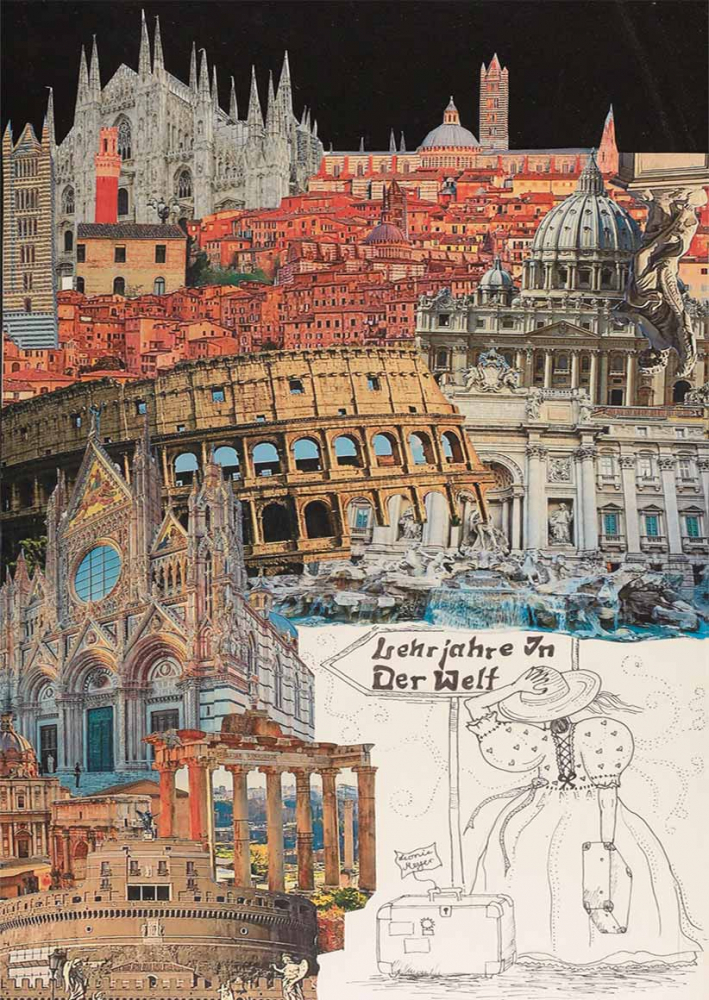 In early 1905, Leonie leaves her girls’ finishing school and returned to her family home. She gives the fifth volume of her diary the grand title “From Finishing School to the World! My Apprenticeship in the World.” And indeed, this diary contains numerous descriptions of travels. As an art enthusiast, Leonie is particularly enthusiastic about Rome.

Anna’s collage of landmarks from major Italian cities, which tower over the young Leonie, captures the wide range of her impressions – and also points to how overwhelming and formative traveling can be. 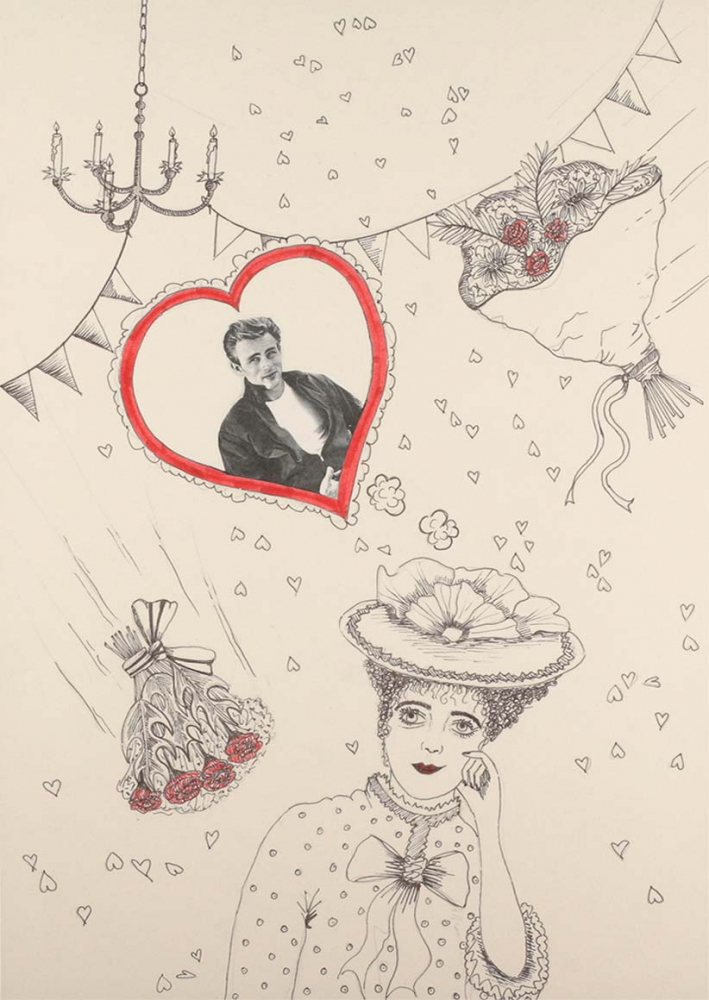 Back home in Hanover – and sometimes on the road – the pursuit of marriage gains increasing importance. Leonie’s parents present her with a long series of candidates, and Leonie rejects them all. She is determined to choose her future husband for herself.

He needs to look like James Dean, Anna thinks – and presents Leonie with another candidate in her drawing! 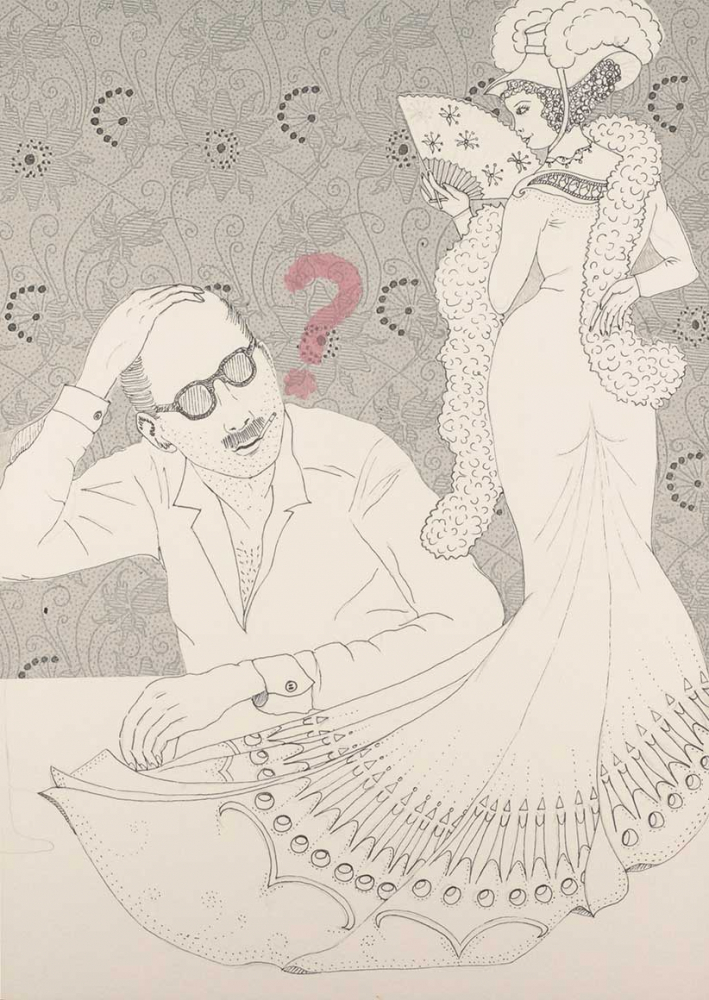 In 1909, Leonie meets the writer Fritz Oliven, who was thirteen years her senior, during a summer vacation to the spa town of Marienbad (now Mariánské Lázně, Czechia). He immediately falls in love with Leonie, who has reservations at first, but confides to her diary: I want Dr. O.!

Is that why Anna echoes the floral pattern from the endpapers of Leonie Meyer’s diary in the background of her drawing? 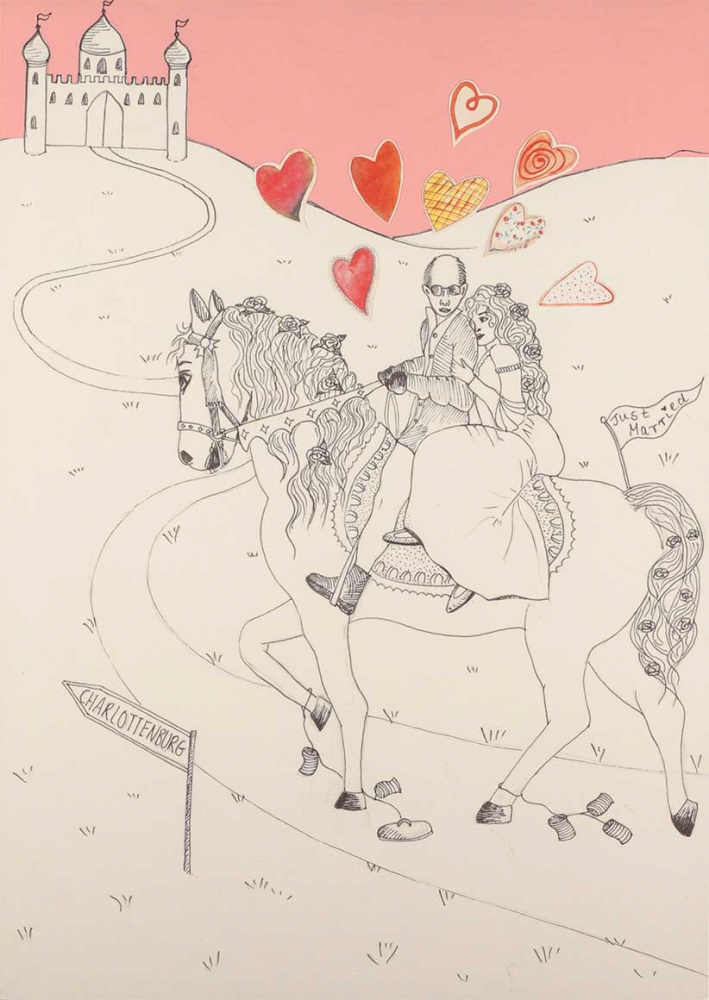 Two years pass before Leonie Meyer and Fritz Oliven become a couple, get engaged and finally marry on 16 January 1912.

In her drawing, Anna places the newlyweds on a horse and has the two of them ride into a happy future. Their life together begins in Charlottenburg, near the gates of Berlin. And even the pink sky indicates lovebirds’ bliss... 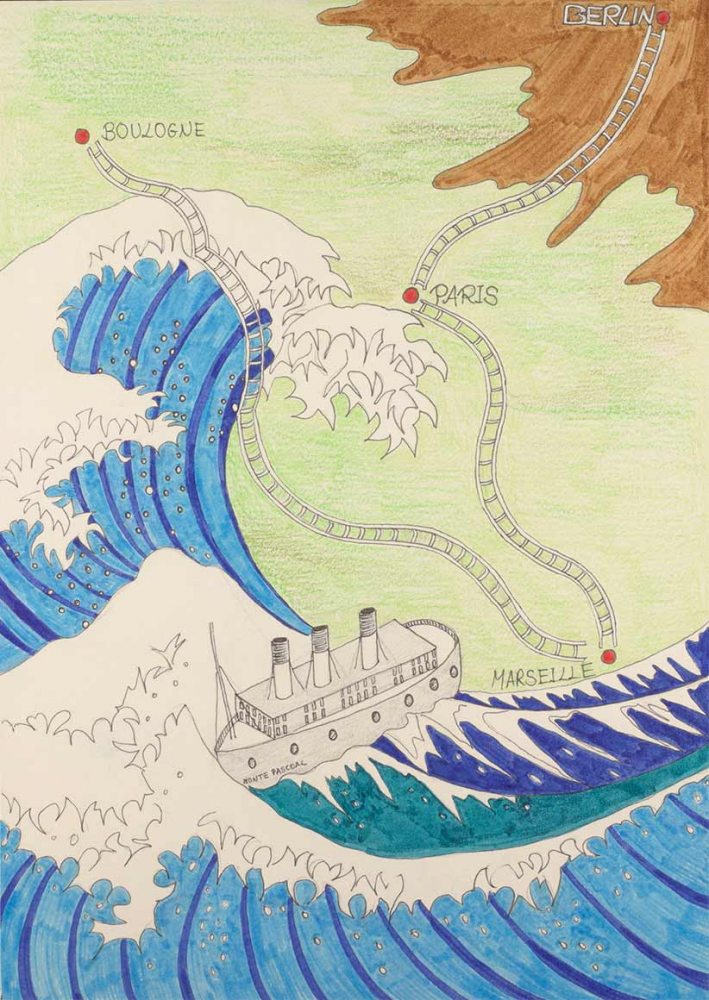 From 1933 onwards, conditions for Jews in Nazi German grew ever harder and more dangerous.

Leonie and Fritz Oliven decide to seek safety for themselves and their children and to put Germany behind them. In March 1939, the family leave Berlin, initially for Paris. Making several stops and traveling by train and ship, the Olivens eventually arrive in Brazil.

In her portrayal of this odyssey in search of refuge, Anna references The Great Wave off Kanagawa by Katsushika Hokusai from the 1830s. This allows her to visualize both the imminent danger the Olivens faced in Germany and the dramatic circumstances of their path as refugees. 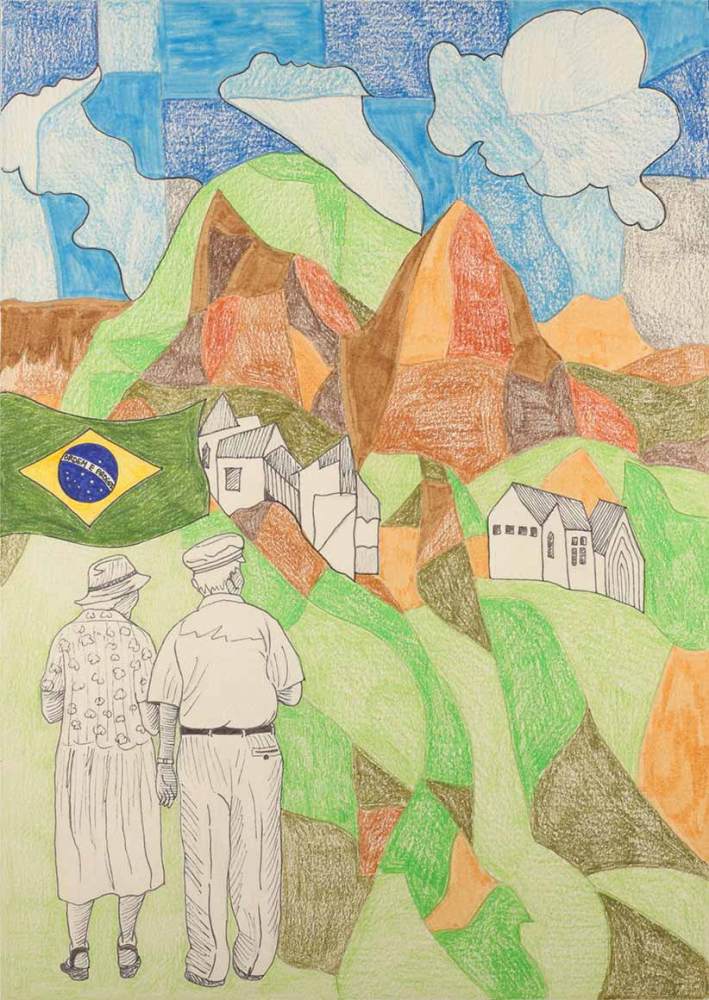 The Olivens ultimately settle in Pôrto Alegre. At first they find it difficult to adjust. Everything is so different from Berlin, and at first their living standards are very modest.
In 1948, Leonie Oliven died after a severe illness at the age of only sixty.

To portray the upheavals and fractures entailed by life in exile, Anna employs effects of estrangement reminiscent of Cubist painting. And Leonie and Fritz face the new challenges hand in hand...

The current project by our eighteen-year-old volunteer is inspired by the life story of Leonie Oliven, née Meyer (1889–1948). Anna was very intensively occupied with the seven diaries that Leonie kept for nearly three decades of her life. The first entry was written in 1901, when Leonie received her first (surviving) diary as a gift for her fourteenth birthday in Hanover. The last entry is dated 1928. During the intervening years, Leonie had many life experiences – including getting married, moving to Berlin, and becoming a mother of three.

The locks on the diaries are impossible to overlook. They clearly mark the privacy desired by the author. The text enables extraordinary and at times very intimate glimpses of Leonie’s life, thoughts, and emotional world, describing her friendships, her experience of falling in love, and her plans for the future. This very personal perspective gave Anna access to Leonie’s lived experience and sparked her enthusiasm. However, her artistic exploration of Leonie’s biography strives for a responsible treatment of Leonie’s privacy. The historical sources serve as her point of departure, but she interprets them freely.

Leonie’s diaries are among numerous documents and photographs that were donated to the museum as a gift of the Oliven family. If you're intrigued to learn more about Leonie and her diaries, we recommend taking a look at our online feature: “No, I Want Dr. O.” Leonie Meyer’s Diaries from the Years before her Marriage (1910–12).

There are no surviving diaries from Leonie’s later life, but we do have many other documents and photographs that allow us to reconstruct it. 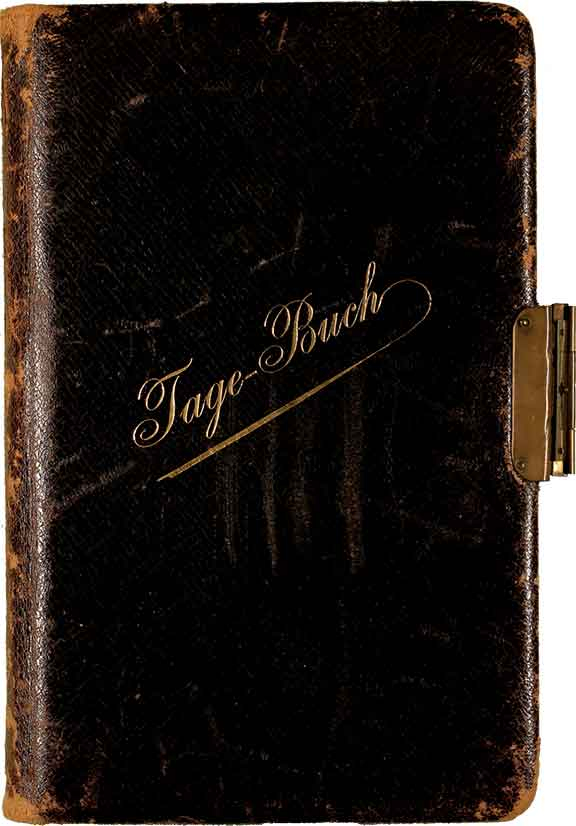 One of the diaries of Leonie Oliven née Meyer bearing a very conspicuous lock. The first entry is from 7 July 1910 and the last one is from 11 January 1912; Jewish Museum Berlin; accession 2016/145/636, gift of the Oliven Family 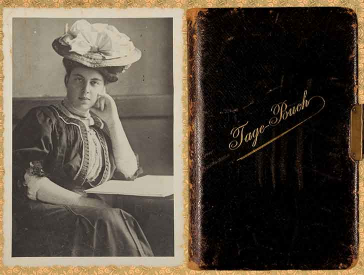 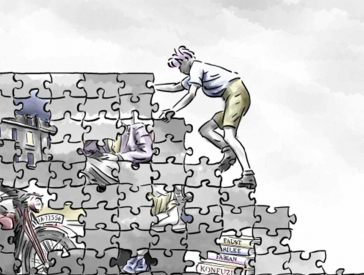 Initially, all we have is a first name, but intensive research brings some details to light.

A Year of Civil Service at the Jewish Museum Berlin