In the archive of the Jewish Museum Berlin, there is a moving letter that Marianne Joachim wrote to her in-laws on 4 March 1943. That same day at the Berlin Plötzensee detention center, the young woman was executed. What had happened?

Marianne and Heinz Joachim supposedly joined a resistance group in 1941 led by Herbert Baum. A Jew and communist, Baum had been gathering like-minded friends around him since 1933 to generate resistance against the politics of National Socialism. On 18 May 1942, the group attempted to set fire to the anti-Soviet exhibit The Soviet Paradise in Berlin’s Lustgarten. Among the members jailed in short order and sentenced to death were Marianne and Heinz Joachim. 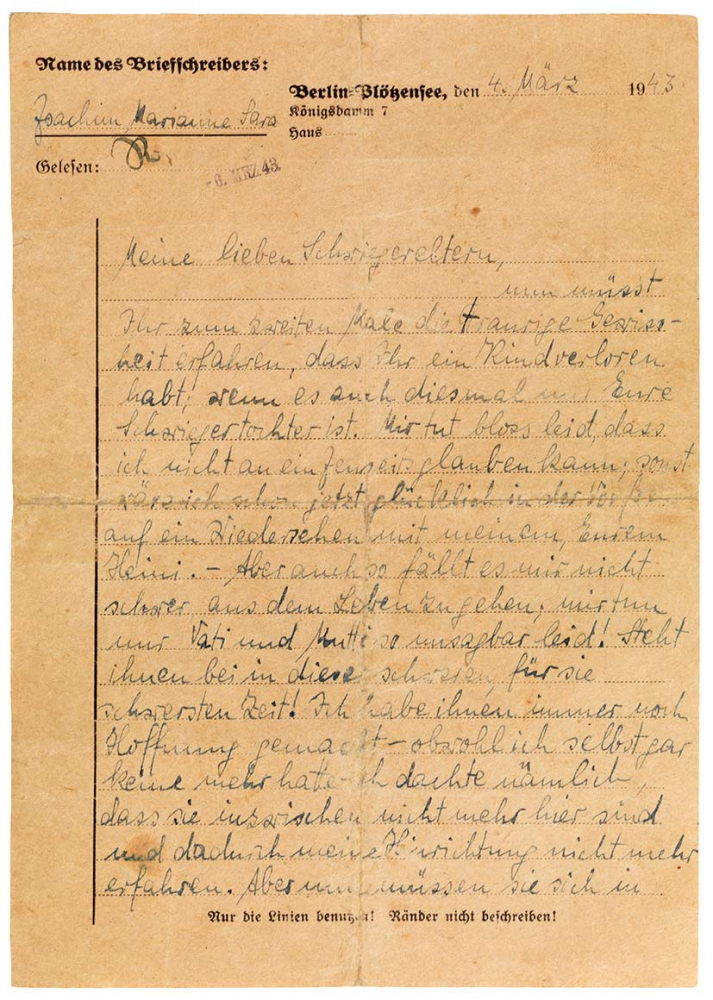 Translation of the letter (page 1):

Now you must be informed for the second time that you have lost a child, if this time it is only your daughter-in-law. I am only sorry that I don’t believe in an afterlife; otherwise I would already be rejoicing in anticipation of a reunion with my, and your, Heini. – But it is not so hard after all to leave this life; I’m so sorry for Mama and Papa! Stand by them in this difficult – for them most difficult – time! I have always given them hope – although I myself had none at all – I thought that they wouldn’t be here anymore and so wouldn’t learn of my execution. But now they must take themselves” 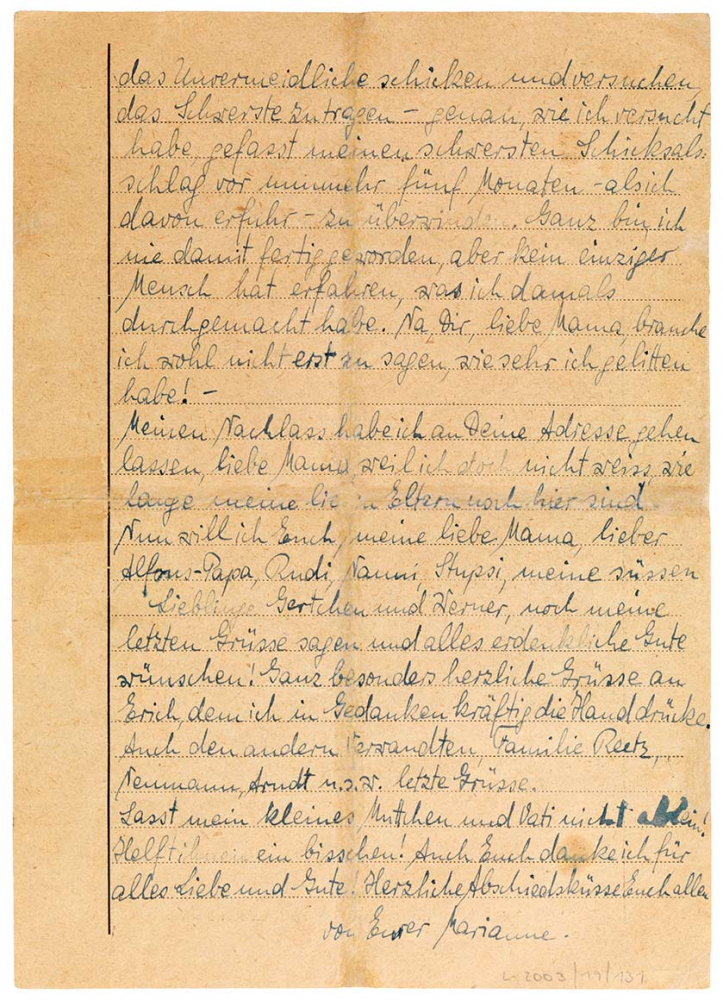 Translation of the letter (page 2):

“to the Inevitable and try to bear the hardest – just as I have tried to overcome calmly my heaviest blow of fate, that of now over five months ago, when I learned of it. I won’t ever be completely finished with it, but no one has experienced what I went through then. Well, to you, dear Mama, I hardly need to describe how much I suffered!

I have had my things sent to your address, dear Mama, because I don’t know how much longer my parents will be here. Now I want to send you all my last greetings, my dear Mama, dear Alfons-Papa, Rudi, Nanni, Stupsi, my sweet darlings Gertchen and Werner, and send you every imaginable good wish. Most especially heartfelt greetings to Erich: I’m squeezing his hand tightly in my thoughts. And also to the other relatives, the Reetz family, Neumann, Arndt, and so on, last greetings.

Don’t leave my little Mama and Papa all alone! Help them a bit! And you, thank you for all the love and good things! Warmest farewell kisses to you all

We learn from her letter that finding out that her husband had already been executed on 18 August 1942 in Berlin Plötzensee was the “heaviest stroke of fate” for Marianne. Her greatest concern was for her parents, Jenny and Georg Prager. They were deported in March 1943 to Auschwitz and Theresienstadt where they were killed. Marianne’s sister, Ilse, was able to escape on one of the last Kindertransports to England. Heinz Joachim’s father Alfons, died at the end of 1944 at the concentration camp Sachsenhausen. His mother, Anna, did not have a Jewish background and therefore survived the National Socialist period, as did his brothers.

Marianne Joachim’s farewell letter was left to the Jewish Museum by Manfred Joachim on permanent loan. From March to August 2010 it was on display in our permanent exhibition – a short time for such an impressive document.

We were only able to show the letter for 6 months because it was written with ink and is thus particularly sensitive. But why is that? In order for fountain pens to write, their ink must flow well and continuously. To this end, the color component needs to be very fine and to dissolve well in water. To avoid the problem of water-insoluble pigment altogether, many inks are made with various, mostly synthetic dies. The chemical structure of the dye molecules constantly changes under the influence of light. Thus, any longer of an exhibition would cause the intense ink-blue of the handwriting to irrevocably fade more and more. We would then be able to read Marianne Joachim’s striking letter of goodbye only with great difficulty.