Coincidences in the Archive

In our everyday work in the archive, now and again coincidences arise that seem unbelievable at first. For example, when Archive Director Aubrey Pomerance traveled to New York in 2013 to visit potential donors and acquire new family collections. He had gotten in touch in advance, but it was only when he arrived in Manhattan that he realized that two people he was visiting both lived in the same building on West 70th Street on the Upper West Side.

Neither knew anything about the other, though they’d probably seen each other in the elevator many times. Both were born in Berlin, one in 1929, the other in 1932. One left Germany in December 1938, the other in fall of 1939. They were both linked by a similar fate. Manhattan has more than 1.6 million residents, and two ex-Berliners were living nearly side by side without knowing it. Both Jack Wolkenfeld and John Steinmetz have become donors and their family collections enrich our holdings.

We now have more than 1,600 family collections and estates that have been inventoried and are accessible in our database, where they are searchable, for example by the names of individuals. We are often able to provide positive answers to queries from external users seeking documents and photographs of German Jews. But it still takes a little luck. 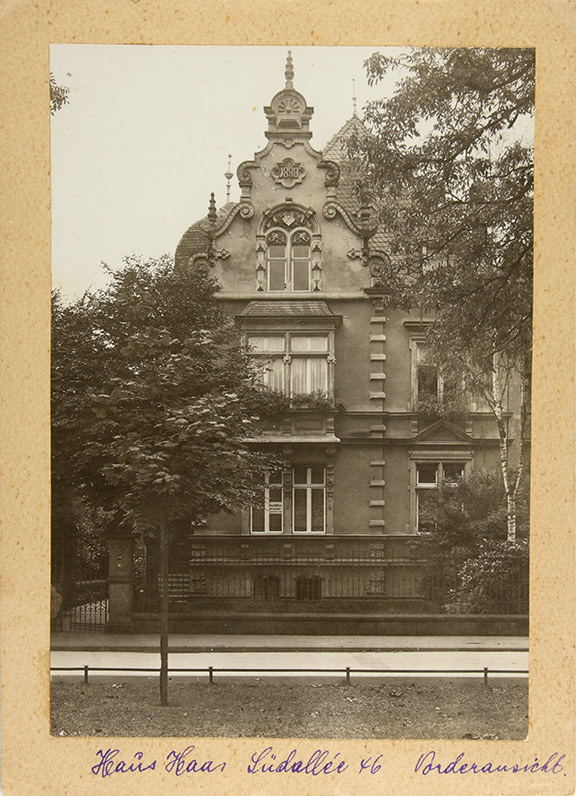 A Coincidental Visit during the Berlinale Film Festival

I’d like to tell you about a happy coincidence that came about three years ago and left a strong impression on me. On Wednesday, 15 February 2017, I was working in the reading room of the Academy of the Jewish Museum Berlin, which is used by visitors to the library as well as the archive. It was a quiet day, until a spontaneous visitor stuck his head through the door. His name was Juan Mandelbaum, a filmmaker from the United States, and he was spending some time in Berlin because of the Berlinale. He was making use of the time between two films to do some research in the archive about his father's family, who were from Mannheim. We came into conversation. Unfortunately, we didn't have any documents on his family, but I provided him with a few local history books from the library.

As he was about to leave he began telling me about his mother’s family, the Bley family from the city of Trier. Juan told me that his mother’s family was Catholic, but that his uncle Josef had married a Jewish woman: Ilse’s family owned a large department store in Trier. They had to emigrate in the mid-1930s and went to Argentina. In 1939 Juan’s mother also went to Argentina, where Juan was born. 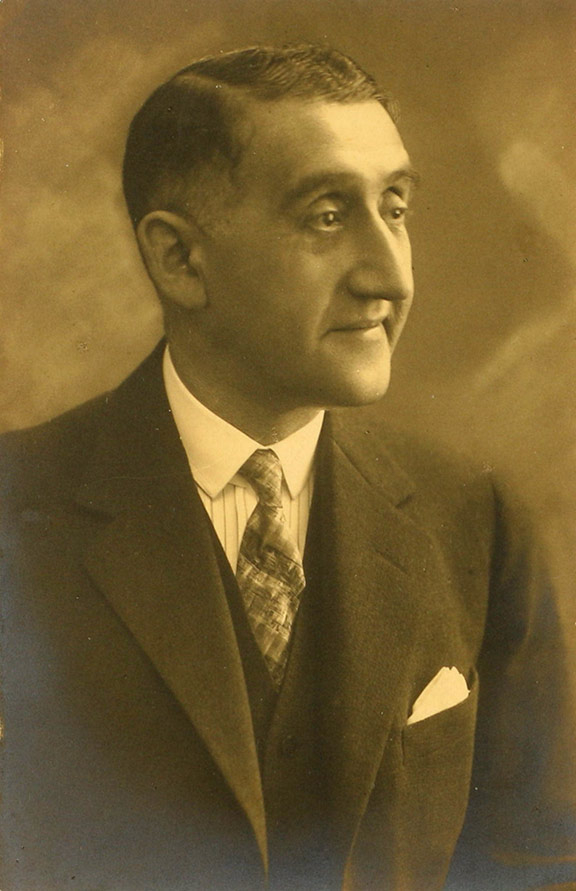 As coincidence would have it, a few weeks before I had accepted a collection for the archive that focused on a family from Trier. They had owned a department store for two generations. Originally it was run by Hermann Haas, then by his sons Max and Albert after his death in 1886. And so I asked Juan if he perhaps meant the Haas Department Store. He was speechless to hear that I knew of it. At the moment he probably thought that I was familiar with every formerly Jewish department store in the German Reich, but it was just a lucky coincidence.

Since I hadn’t inventoried that collection completely, it wasn’t yet listed in our museum database. And so, had one of my colleagues been working in the reading room instead, they would have told Juan to the best of their knowledge and in good conscience that we didn’t have any documents on a department store in Trier. 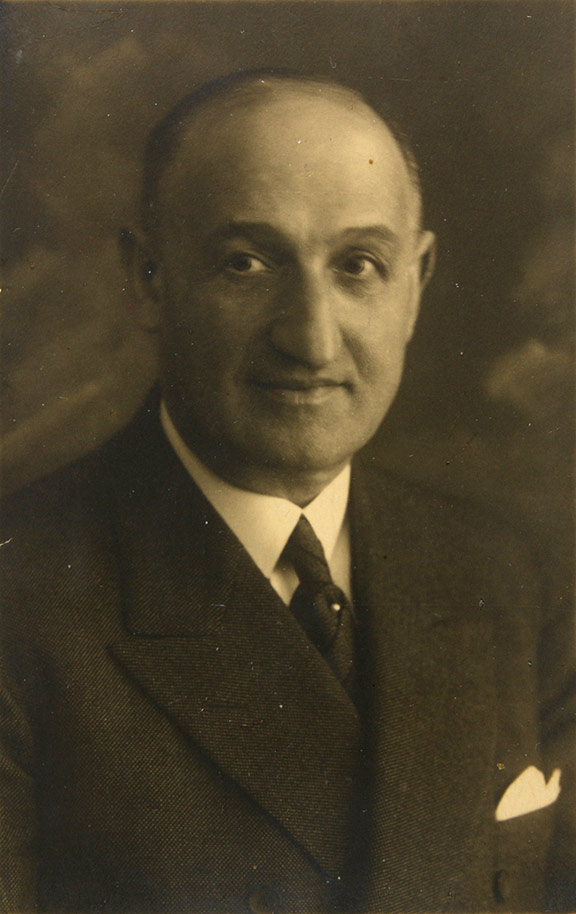 We had received the collection as a donation from Edna Haas, who was born in 1954 in Israel, but who had been living in Berlin for several years, and whom I know personally. Her father Fritz was from Trier and emigrated to Palestine at 20. Edna’s grandfather Albert Haas died in 1933 in Trier. Juan's cousin Alice, who lives in Buenos Aires, is the granddaughter of Max Haas, who had emigrated from Trier to Argentina.

Of course, I informed Edna immediately and asked if she wanted to meet Juan that evening. Time was of the essence because he was supposed to fly back to the United States the next day. Edna didn’t hesitate. Unfortunately, I myself had obligations that evening, otherwise I would have insisted on being present at the meeting. The next morning, however, I did receive a detailed report on how the evening went. Edna and Juan went to dinner together and then they spontaneously decided to Skype with Alice Bley, her second cousin and elder by 12 years. 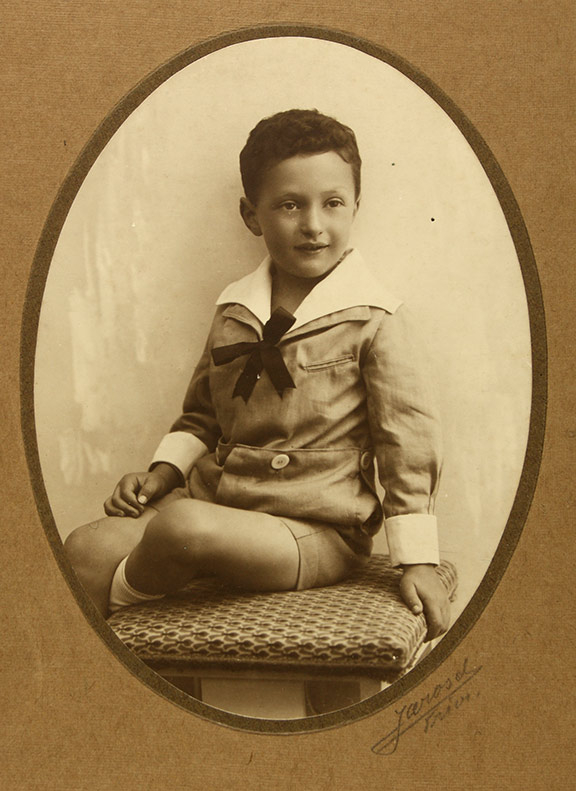 “It was so emotional,” Edna told me. And Juan reported happily:

“Both Edna and Alice had many recollections to share. Alice had actually visited Edna’s home in Israel as a newlywed and remembered what Edna was wearing! Edna and her father were also close friends with a violist with the Israeli Philharmonic who had been my mother’s boyfriend in Trier. We were all tremendously moved and grateful. This is only the beginning.”

A Lot to Talk About

The two cousins had seen each other for the first—and until now last—time in 1963. Then contact broke off between the part of the family in Israel and the part in Argentina. Both sides were too occupied by their everyday lives, and the physical distance was too great. But Juan's prediction was correct. That first contact was just the beginning. Since then, they sometimes message each other and send each other birthday greetings. 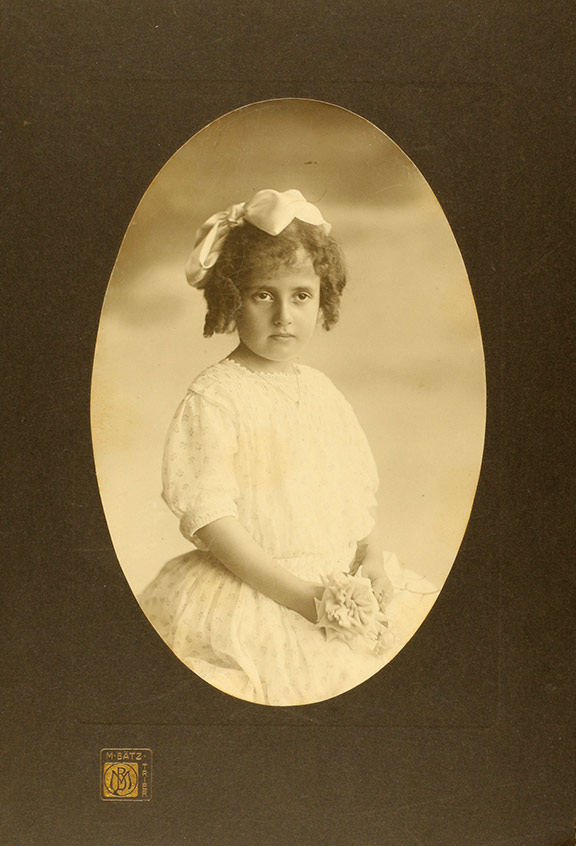 Since February 2017, I have also been in direct contact with Alice. Two days after her virtual meeting with Edna, she wrote to me:

“I’m still under the effects of a sort of spiritual ‘shock’ … Indeed a wonderful one...!!! For many decades, I wanted to ‘know’ so many things about my ancestors, about their lives and histories.”

Now Alice suddenly understood things that were significant to her, for example where her first name came from. She was named after Edna’s grandmother Alice Haas née Loeser. She also emigrated in 1936 to Palestine, where she died three years later. When Alice was born in 1942 in Buenos Aires, her parents named her after her deceased aunt.

Three years have passed since Juan’s spontaneous visit to the reading room. In addition to the numerous documents and photographs that Edna Haas had already donated to us in 2016, in 2019 Alice Bley gave us a dozen photographs, mainly of Max Haas and his daughter Ilse (Alice’s mother).

One of the photos shows the Haas Department Store as it appeared after its renovation in 1912. The elegant commercial building has a sober Neoclassical appearance. A view of the same building hangs in Edna’s living room in Berlin. It was taken a few years earlier and still shows the building with a Historicist facade. 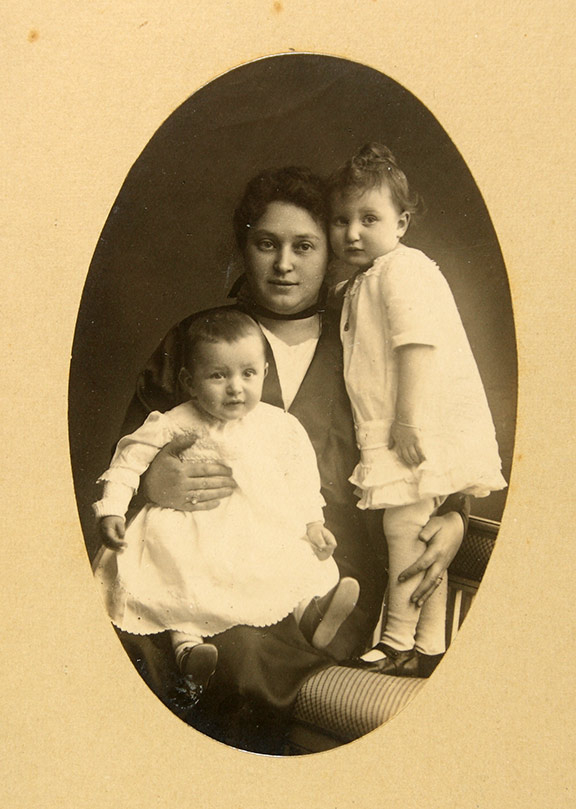 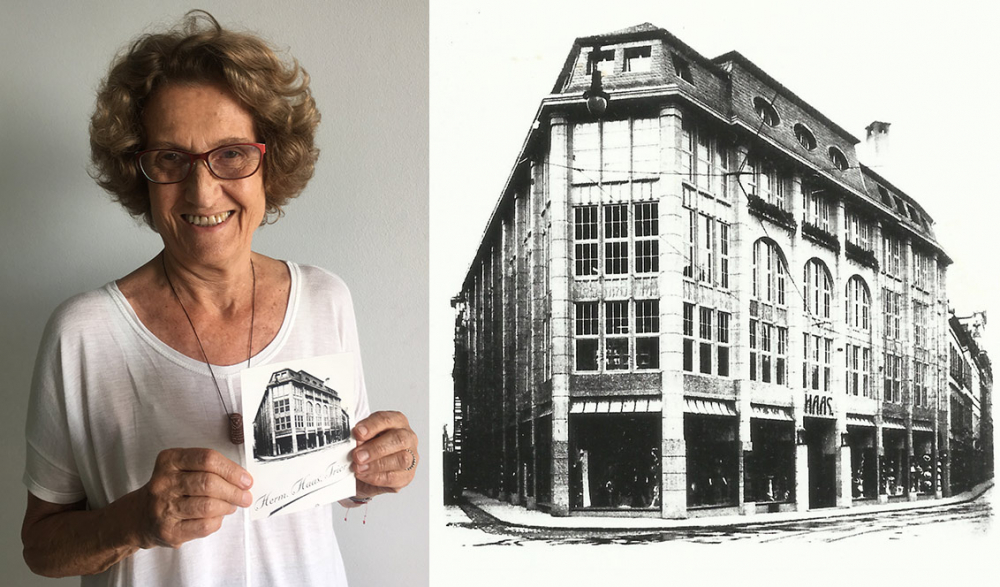 Both sides of the family keep the story of the department store alive in their memory. It came to a traumatic end after the National Socialists seized power: under the pretext of the crime of currency offense, on 13 May 1933, the National Socialists arrested both brothers, Max and Albert, as well as Max’s wife Jeanne née Oster. The anti-Semitic tabloid Der Stürmer and the local Nazi paper agitated against the “Judenfamilie” and reported on the “Jewish currency scandal in Trier.” Max’s wife took her own life while in investigative custody.

The Haas brothers were finally released from prison. This was achieved by junior lawyer Josef Bley, later husband to Ilse Haas and father to Alice. Albert Haas suffered a heart attack shortly after being released and died on 6 September 1933 at the age of 59 years. The widower Max Haas emigrated, a broken and impoverished man, to Argentina. The department store was “Aryanized,” from then on operating under the name “Insel Textilhaus Dorn und Kempkes.” 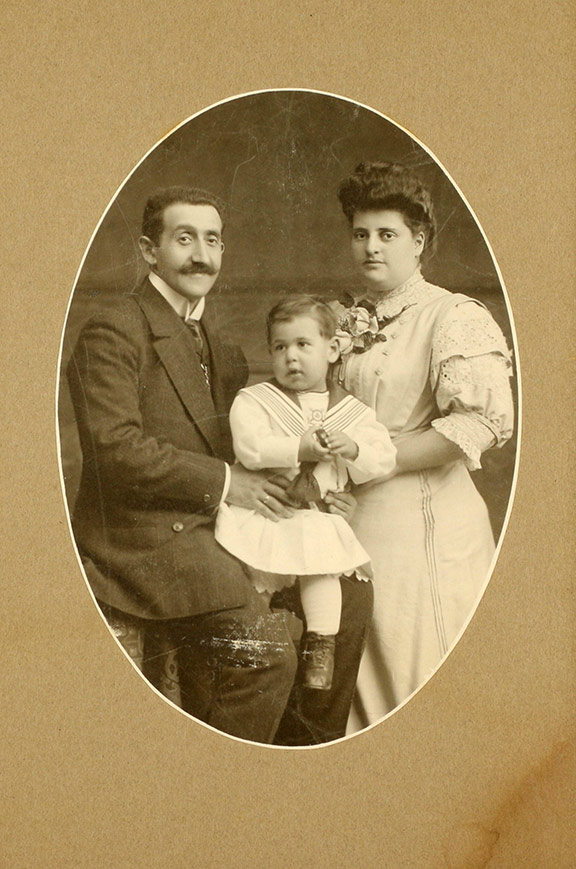 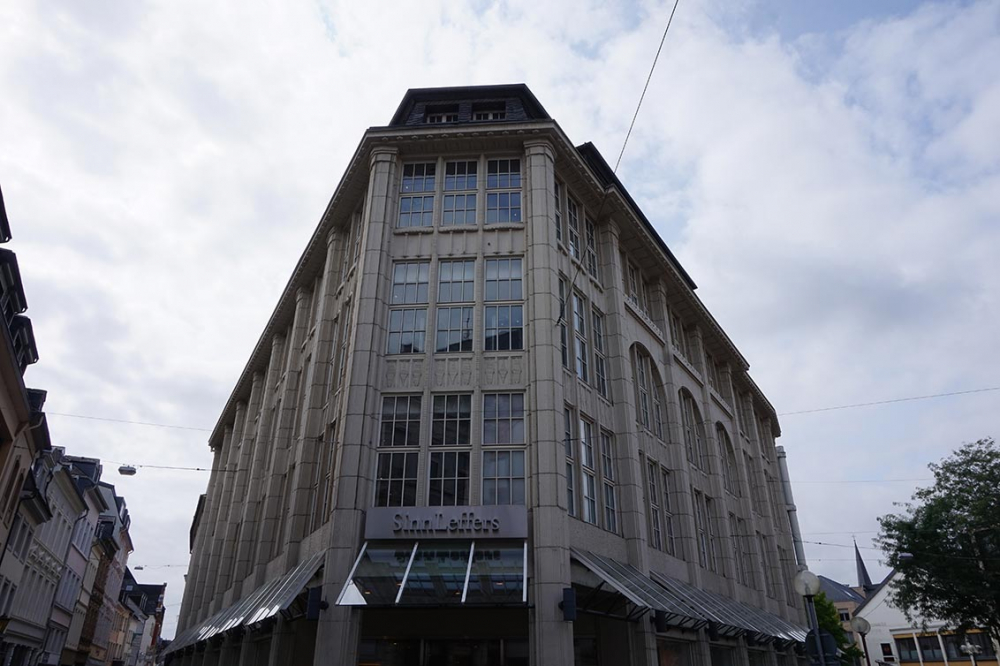 On the other hand, it was no coincidence that I stopped by Trier in 2017 while in the region on vacation. Straightaway I headed to Fahrstraße. It was also a special moment for me to stand in front of what was once the Haas Department Store. 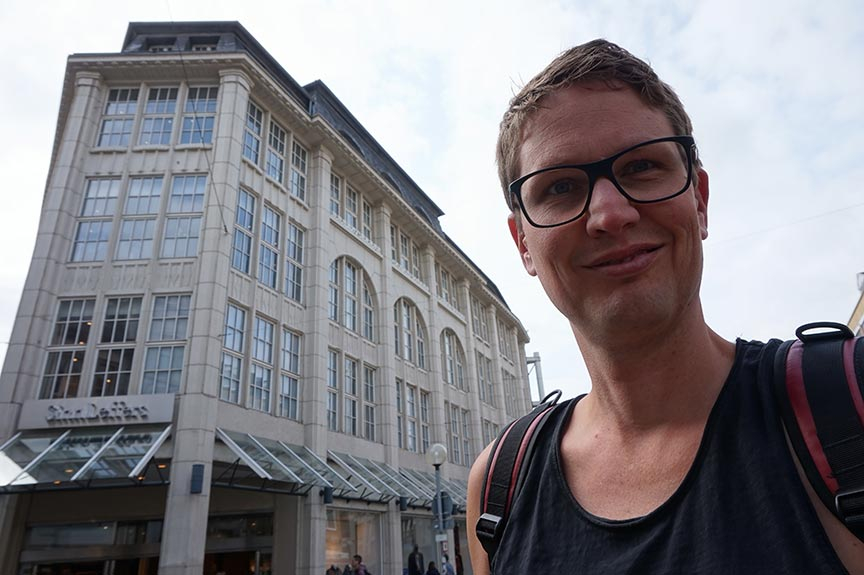