I’m looking at recorded instants of an eventful life. 511 moments. Captured by photography, meticulously organized according to subject matter over four photo albums. They come from the estate of Olga Irén Fröhlich, a German-Jewish singer and cabaret artist who worked from the 1930s into the 1960s.

Interesting and poignant biographical stories are often hidden behind the photographs that come into my hands every day. The history of these four photo albums and their one-time owner is a very particular one for me, however, because it’s at once unusual and moving.

Olga Irén Fröhlich was born in Hamburg on 9 January 1904, as the second-youngest of eight siblings. Her family had come from Hungary and settled, after a short stay in Breslau, in the Northwestern German city where her father Carl Weber co-founded the furniture business Leers and Weber. Her brother Ede and sister Lisel were already artistically active, as a pianist and modern dancer respectively.
Since Olga Irén was supposed to work at her father’s company though, she began her studies at the school of commerce in Hamburg.

In October of 1922 she married Alfred Fröhlich and moved with him to Breslau, where her daughter Margit was born on 29 November 1923 (Margit would later make it to England, in 1938, through the Refugee Children Movement).

In the 1920s Fröhlich began her career as a cabaret artist, or more exactly, a monologist. Her first appearance occurred at the opening ceremony for the new building of the Breslau Oddfellows Lodge, where the couple had a membership. Upon receiving a lot of positive feedback she took on more commitments: by 1927 she had toured throughout Germany, appearing at, among other venues, the Varieté Astoria in Bremen and the Kabarett der Komiker (comediens’ cabaret) in Berlin.

As early as 1934 she fled without her family to Switzerland, where she was only allowed to remain, however, for nine months. In the interim she performed in Belgium, the Netherlands, Austria, and Luxemburg. After the divorce from her first husband, she entered into a marriage of convenience with a hotelier in Biel in order to gain permanent residency in Switzerland. 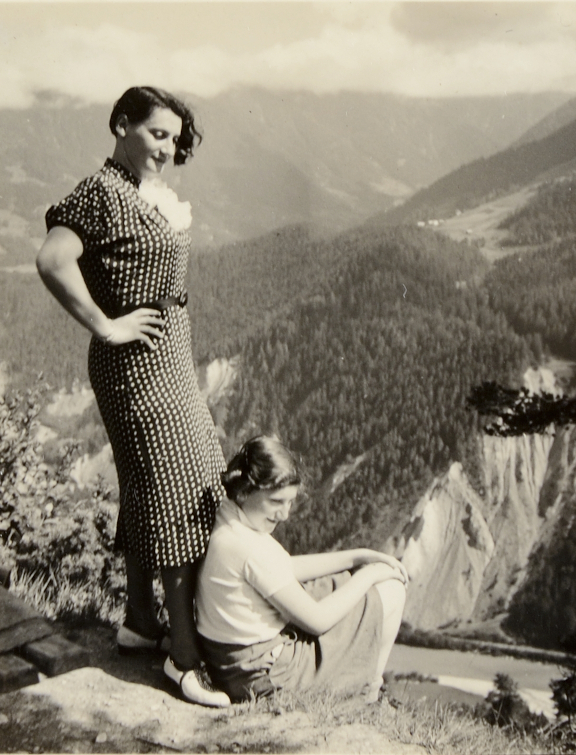 Olga Irén Fröhlich and her daughter Margit in the mountains, Switzerland, in July or August 1938; Jewish Museum Berlin, gift of the Verein Lastoria e.V. Bremen 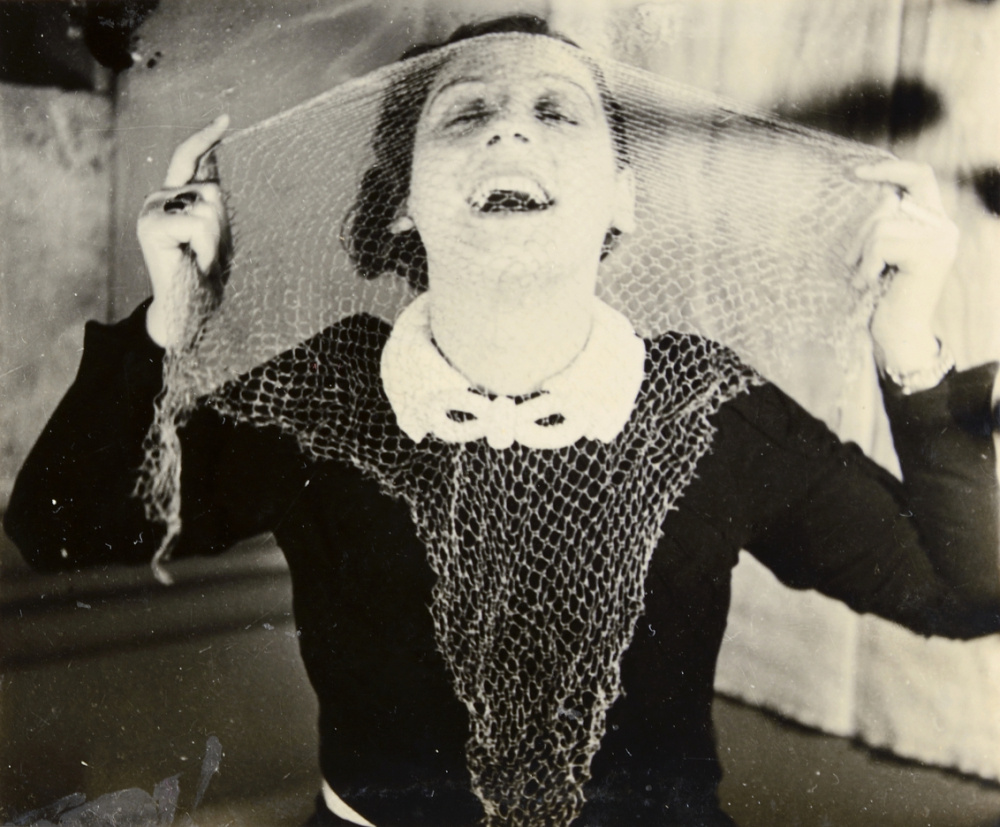 At the end of the 1940s Fröhlich divorced her second husband and moved in 1952 to Bremen. In addition to regular appearances at the Varieté Astoria, she worked through the 50s and 60s for the radio broadcasters Free Berlin, RIAS, and Radio Bremen. Ultimately she lived together with her companion, the artistic director of the Astoria, Renate Noack, in an apartment at Ostertor in Bremen. She died there on 24 February 1995.

More on lastoria-bremen.de (in German)

The photo albums, which tell the story of Fröhlich’s life so vividly, were rescued from a garbage container by an engaged citizen of Bremen. Without his involvement, this evidence of her life would have been destroyed. It’s impossible to reconstruct whether the albums were disposed of directly on Fröhlich’s death or some years later. But what we do know is that the person who found them gave them to an acquaintance, who stored them for a time before at last giving them to the Bremen Verein Lastoria e.V., an association dedicated to the history of the Varieté Astoria.

That group began to conduct extensive research into Fröhlich’s work and biography well beyond Germany’s borders, eventually publishing articles in print and online. Since the Verein has a strong interest in preserving Olga Irén Fröhlich’s legacy and making it accessible to the public, it decided in 2014 to give the four photo albums to the Jewish Museum Berlin. When I started doing the inventory, their research results were my most valuable source of information.

Along with books, magazines, and online data banks, the photographs themselves are an important source. They have the potential to shed light on the social relationships and personal memories of the relevant parties, above and beyond mere biographical facts. Fröhlich’s albums include a large number of pictures by her colleagues and friends, who write her from across Europe and the USA. Many feature dedications that express the appeal of and respect for her artistic work as well as for her personally:

Olga Irén Fröhlich, the ‘most focused cabaret artist’, who happens also to be a surprisingly pleasant person, with the most sincere affection. 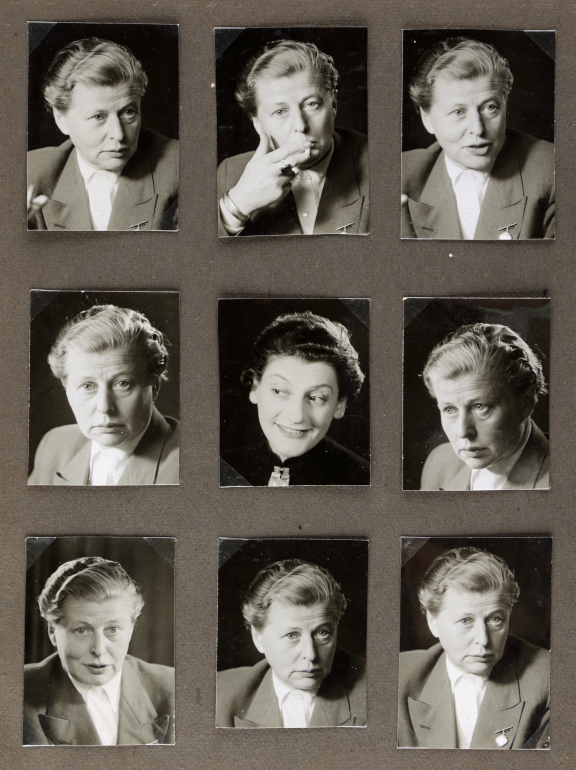 Series of photos with eight portraits of Renate Noack and one portrait of Olga Irén Fröhlich, probably Bremen, between 1953 and 1960; Jewish Museum Berlin, gift of the Verein Lastoria e.V. Bremen. Further information about this photo can be found in our online collections (in German)

This dedication from Karl Schnog, a German-Jewish writer and cabaret artist, like those from other colleauges and friends of Fröhlich, are testimony to the great recognition her artistic achievement received along with her prominence within the cabaret scene. More than anything else, it is the photographs that render Olga Irén Fröhlich’s life story palpable and vivid, and her biography intelligible. This in particular is what personal photos can do and what continues to fascinate me about my work.

Anna Rosemann, photographic collection, is still searching for and finding new information about the life of Olga Irén Fröhlich.

PS: I owe a debt of gratitude to the Verein Lastoria e.V. and in particular to Ms. Felsing for the comprehensive amount of information they provided me.

An Interview with Olga Irén Fröhlich