Berlin in Times of Cholera

A Look into our Archive

Life-threatening epidemics are not a new phenomenon... Cholera broke out in Berlin in 1837, killing 2,429 people. Louis Röhmann, born in 1819 in what was then West Prussian Märkisch Friedland (Polish: Mirosławiec), was a student of the Königlich Joachimsthalschen Gymnasium in Berlin, where he watched the situation unfold. In our archives we have his diary, in which he reported on the course of the epidemic several times between August and October 1837. His diary entries show some parallels to the current corona pandemic.

On 11 August, 18-year-old Louis writes: “Rumor has it that cholera will be paying us a visit again.” Seven days later, the rumor has turned into reality: “Cholera is progressing considerably, but I am not bothering about it, even though my constitution would advise me to take it easy.” By 21 August, first effects of the epidemic are becoming apparent in daily school life: “Teachers and students are slacking, many are absent due to illness and a lot of lessons are cancelled, which is fine by me. Our castellan [administrator] also died of cholera and the disease is spreading further and further.”

Louis’ primary concern, however, is not for himself but for his mother, who lives far away in Friedland: “I am only afraid that mother will be afraid.” He writes her a letter to reassure her by trying to “ridicule the whole thing.” But he, too, starts to take the infectious disease more seriously: “Cholera is beginning to take on a more threatening character, and I want to keep to my diet.” On 30 August, he writes: “The number of cholera cases is still increasing and fear is spreading too,” and on September 6: “Cholera is still claiming a significant number of victims and there is much fear here, especially amongst rich Jews. Three days later he writes that more and more classmates are leaving Berlin for their hometowns to flee cholera – or, as he sardonically adds, “out of laziness and homesickness.” 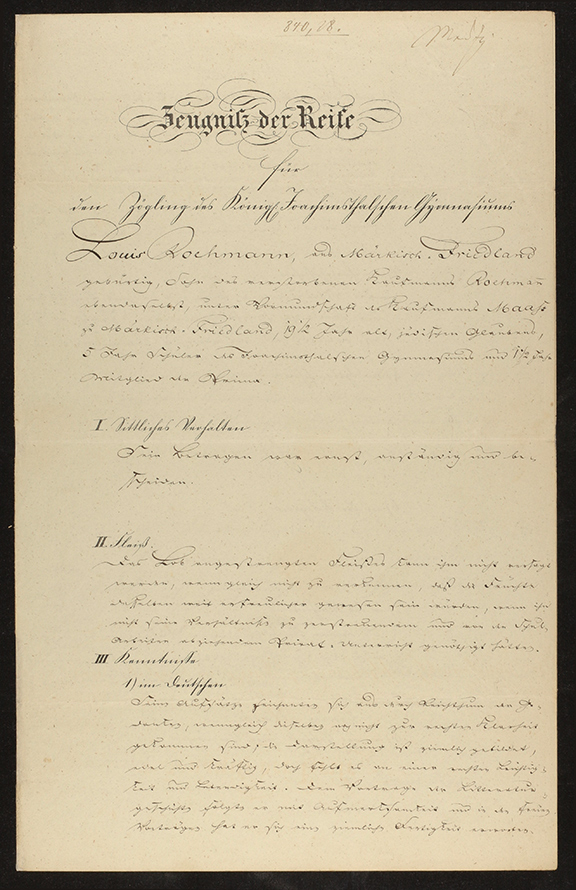 “Cholera is still claiming a significant number of victims and there is much fear here [...].“

Meanwhile, he is worrying about his mother, as: “This epidemic is also raging near Friedland, God protect our city from it!” Shortly afterwards he learns that the school will close on 20 September: They will have “three weeks vacation (due to cholera).” On 21 September, he himself falls ill with severe diarrhea, which he puts down to the consumption of fresh fruit. He calms down: “I am by no means afraid of cholera. At the beginning of October, the situation in Berlin seems to be abating. And Louis himself has also recovered: “The cholera figures here are falling considerably, due no doubt to some extent to the diet of the Berliners, who really are to be praised in this respect.” His final entry on the epidemic is dated 24 October 1837: “Cholera has almost completely stopped here, as it has in most of Prussia’s important cities.”

The diary of Louis Röhmann is completely digitized and accessible online.
Take a look at the digitized diary

Louis Röhmann, whose Jewish first name was Levy, graduated from high school in October 1838 and studied medicine at the Royal Friedrich Wilhelm University in Berlin until 1842. In 1843, he received his license to “practice medicine and wound care.” He opened his own medical practice, where he worked until his early death in 1858. Louis Röhmann found his final resting place at the Jewish Cemetery in Schönhauser Allee, Berlin.

Louis Röhmann’s diary and some educational and professional documents, such as his high school diploma and his license to practice medicine, were taken up in the Jewish Museum Berlin archives in 2005. Descendants who immigrated to the USA in 1936 and took the documents with them at the time donated them to the Museum. The archive collects and preserves numerous estates, family collections, and documents of Jewish families and individuals. 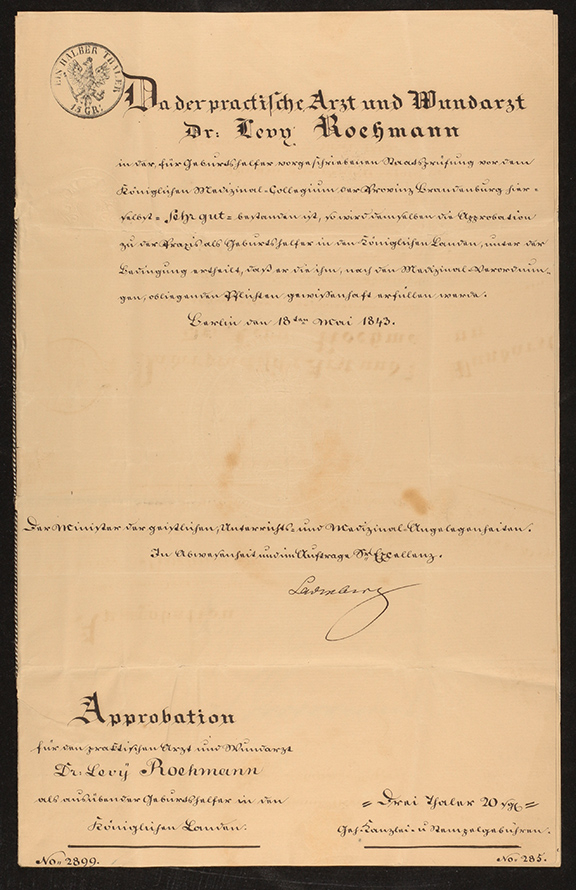 Doreen Tesche, Jörg Waßmer (2020), Berlin in Times of Cholera. A Look into our Archive.
URL: www.jmberlin.de/en/node/7521