Multipurpose Wall Decoration from 1893: A Biblical Map of the Holy Land

This "New and Original Biblical Map of the Holy Land" from 1893 was probably never intended to be used by a pilgrim or traveler on the ground.

In fact, "Biblical maps" were maps of Palestine that showed the Israelites' route through the desert or, in the Christian context, important places in Jesus' life – all based on the latest biblical research. Maps in this genre had existed for centuries aside from contemporary maps that helped travelers get their bearings.

Our map is labeled in English, Hebrew, and Yiddish. It shows current railroad lines alongside the Israelites' passage through the Red Sea, the route taken by biblical scouts to the land of Canaan, and the site of the Battle of Gilboa. In addition to a legend and illustrations of contemporary "sights" such as the Cave of the Patriarchs and the Western Wall of the Temple, it includes a box for recording people's birthdays. This is evidence that the map was conceived as a wall decoration rather than a reference to take on a pilgrimage. 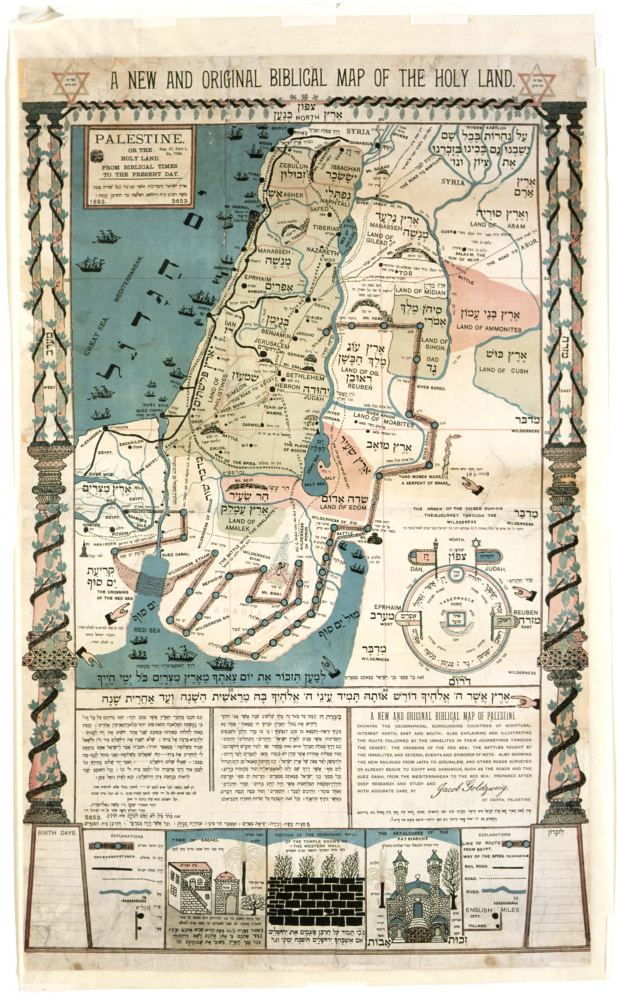 But who hung a map like this on the wall? It must be seen in the context of Zionism, the movement in Judaism to create a Jewish state. "Buy now – it's time!" reads a caption in Yiddish: settle in Palestine, for it is here, the map argues, that the Jewish people's past and future come together.

In ancient times, the word Canaan primarily referred to the region of today’s southwestern Syria and was later expanded to include Palestine. The Torah designates Canaan as the land promised to Abraham and his descendants.

According to the biblical story, King Saul gathered his army against the Philistines at Gilboa, a mountain range in what is now northern Israel.

Tomb of the Patriarchs

The Tomb of the Patriarchs is the last resting place of the forefathers Abraham, Isaac, and Jacob and their wives Sara, Rebecca, and Leah.

The Western Wall of the Temple, also known as the Wailing Wall, is a religious site in Judaism. It was originally an outer retaining wall of the Temple of Jerusalem, which was located there before its destruction in 70 CE.