Parlor Scene on the Day of Rest: The Painting Sabbath by Jankel Adlers

Jankel Adler's painting Sabbath shows a parlor scene on the weekly day of rest. The artist has not depicted the festive, pleasurable moment of welcoming the Shabbat that is familiar from many other pictures. He has chosen to show the hours afterward. A man is reclining on the couch near his prayer shawl, his prayer book in hand. His wife is seated in a chair with a bowl of sunflower seeds in her lap. The table is set with objects and dishes for Shabbat. But the candles have burnt low, half the hallah bread has been eaten, and the wine glass is empty. 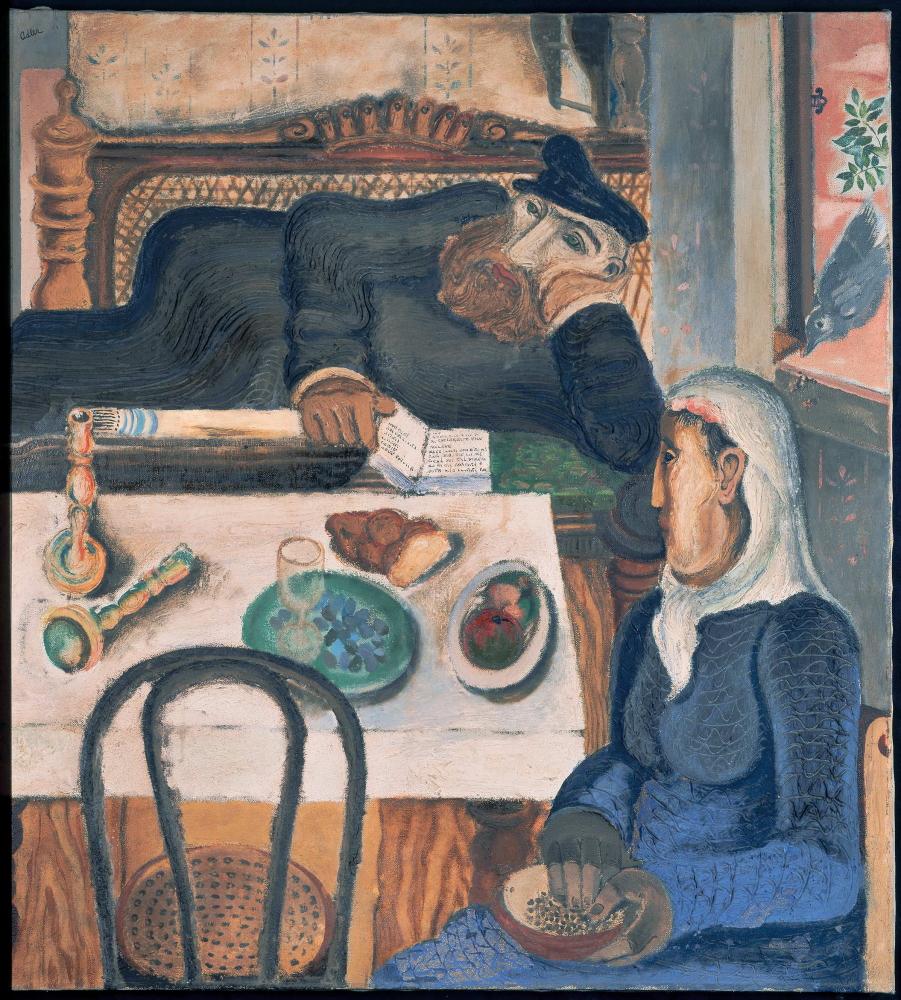 Challah bread is a type of braided white bread that is eaten on Shabbat and holidays.
More on Wikipedia

A Poem by Else Lasker-Schüler

Indeed many works by Jankel Adler contain Jewish themes, individual Yiddish words, and allusions to Jewish customs. The poet Else Lasker-Schüler wrote of her friend:

With large, poetic harp-like characters
He consecrates every picture he paints
To his young god Tsebaoth.

Jankel Adler left Łódź in 1913 to attend the School of Applied Arts in Barmen (present-day Wuppertal). In the 1920s he joined the activities of left-wing avant-garde groups in Düsseldorf, Cologne, and Berlin. His intense engagement with wall painting during this period influenced his painting technique, which involved scratching patterns into a mixture of oil paint and sand.

Sabbath was made in 1927/28 during the artist's brief period of success in Düsseldorf. At that time he was at the center of a small Jewish art community that probably included Düsseldorf lawyer Joseph Gottlieb. It was from Gottlieb's heirs that the Jewish Museum acquired the painting.

In 1933, Jankel Adler went in exile in Paris and, when the war broke out in 1939, volunteered for the Polish army. When he was discharged for health reasons two years later, he moved first to Scotland, and then to London in 1943. Jankel Adler died there in 1949, knowing that none of his nine siblings had survived the Shoah.