The Plesch Family Portrait: A Painting by Max Slevogt

In 1928, Max Slevogt (1868–1932) painted the Plesch family. On the left, we see the well-known doctor Janos Plesch (1878–1957) and in the middle, his wife Melanie surrounded by their three children: Andreas Odilo, on his mother's lap, Dagmar Honoria, at the bottom right, and Peter Hariolf. 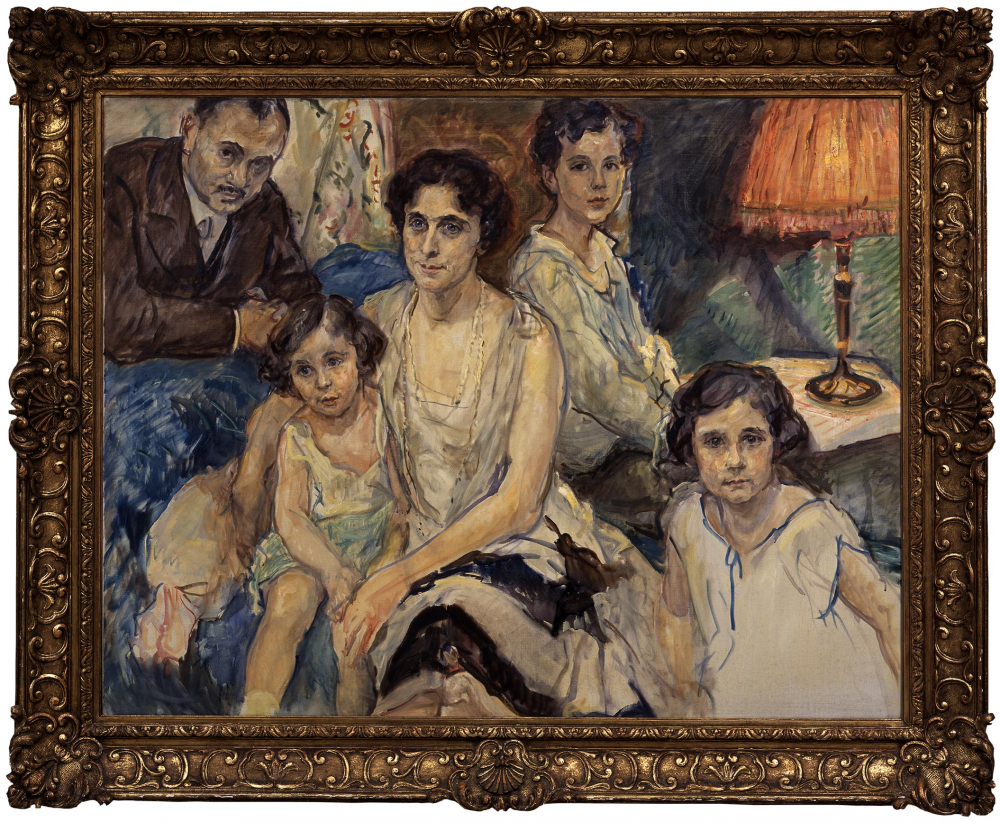 The Family and Their Painter

Janos Plesch left Budapest to settle in Berlin in 1903. There he met his wife Melanie, née Gans, whose family had co-founded the Casella dye factory in Frankfurt. The doctor had a longstanding friendship with Max Slevogt, one of German Impressionism's most important figures alongside Max Liebermann and Lovis Corinth. The artist painted his doctor as an elegant gentleman on a tall canvas in 1923, followed by paintings for their loggia and garden pavilion and finally, in 1928, the family portrait, which hung in the first-floor hall leading to the family's private rooms.

The History of the Painting Plesch Family Portrait 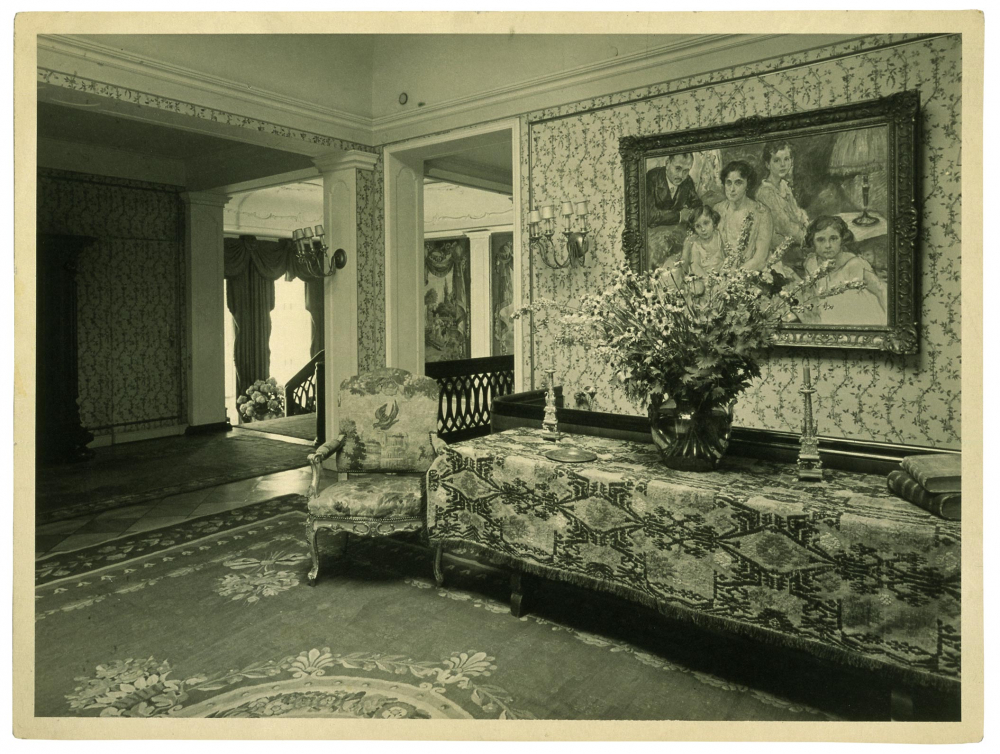 The family portrait on the first floor of the Plesch family house on Budapester Straße, Berlin, around 1930; Jewish Museum Berlin, gift of Professor Peter H. Plesch in memory of his parents Janos and Melanie Plesch. 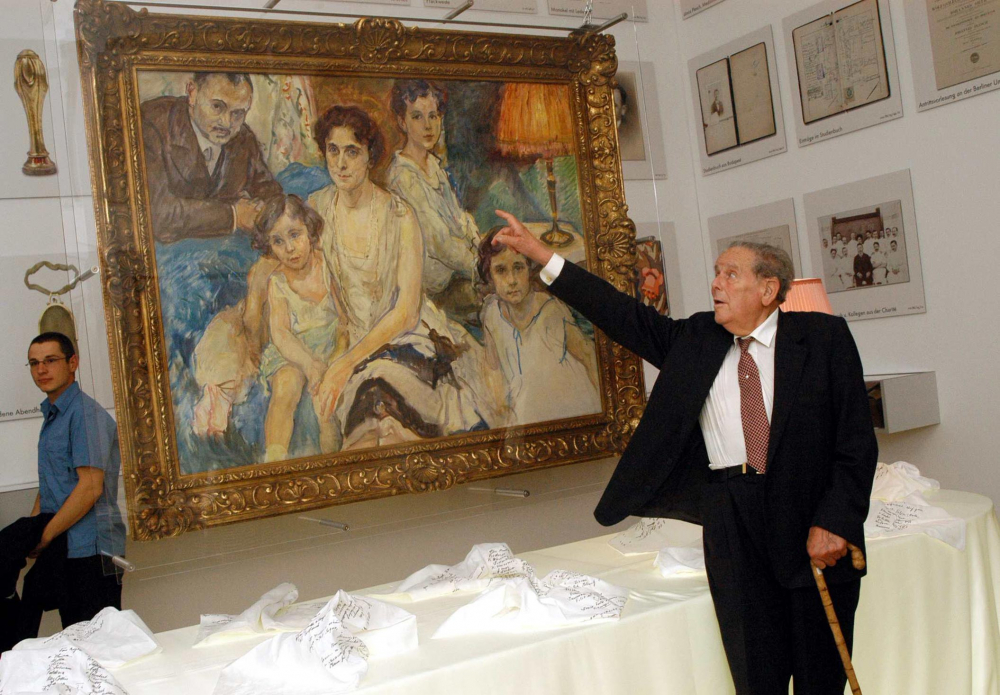 Though Slevogt's composition follows the family-portrait tradition of the Biedermeier period, the painter achieved a synthesis unusual for a modern family portrait: the painting captures the intimacy of family life while fulfilling a group portrait's representative function. The success of the portrait lies perhaps in the fact that it grew out of a long friendship between artist and commissioner based on mutual trust and similar values.

In 1933, Janos Plesch lost his professorship at the Charité teaching hospital and the family fled to England via Switzerland. In Berlin, their secretary arrange for all their household possessions to be shipped to the United Kingdom. That is how this family portrait, too, was rescued.

The Painting's Return to Berlin

Back in 1986, their eldest son Peter Plesch donated his parents' considerable accumulation of possessions to what was then still the Jewish department of the Berlin Museum. Twenty years later, the Jewish Museum Berlin was able to acquire this painting from him.

Max Lieberman (b. 1847 in Berlin, d. 1935 in Berlin) was a German painter and graphic artist.
More on Wikipedia

Lovis Corinth (b. 1858 in Tapiau, East Prussia, d. 1925 in Zandvoort, the Netherlands) was a painter and one of the most significant practitioners of German Impressionism.
More on Wikipedia

This museum of the city and cultural history existed from 1962 to 1995 and was located in the Kollegienhaus at Lindenstrasse 14, which is now part of the Jewish Museum Berlin. 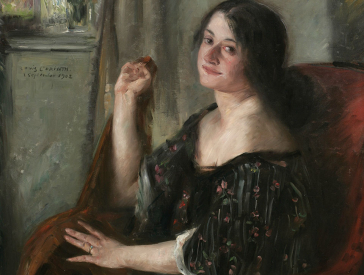 A painting by Lovis Corinth with a secret romantic message