Chanksgiving! As a family of German-American Jewish-Protestant-Catholic-Puritan backgrounds, we do like to celebrate as many holidays as we can possibly fit into our family schedule – with Halloween, our twins’ birthday and the classic German lantern parade for St. Martin’s day making for an action packed twelve days at the beginning of November.

After a bit of a breather we’re heading into the next holiday season – with a bit of a twist this year. Usually Hanukkah – the Jewish festival of lights and miracles – is associated with the Christian festival of lights and a miraculous birth: Christmas. And that makes sense, sort of, superficially at least. A few years ago we had an entire exhibition titled Chrismukkah – a cultural history of the evolution of the two holidays, and this year on 3 December 2013, Rabbi Daniel Katz will present a truly enjoyable talk on how they really don’t fit together at all.

But Thanksgiving? The great egalitarian American holiday, the most democratic holiday of all, with its non-religious focus on togetherness, its non-luxurious, in fact most affordable (some would even argue, utterly flavorless) centerpiece, the turkey? 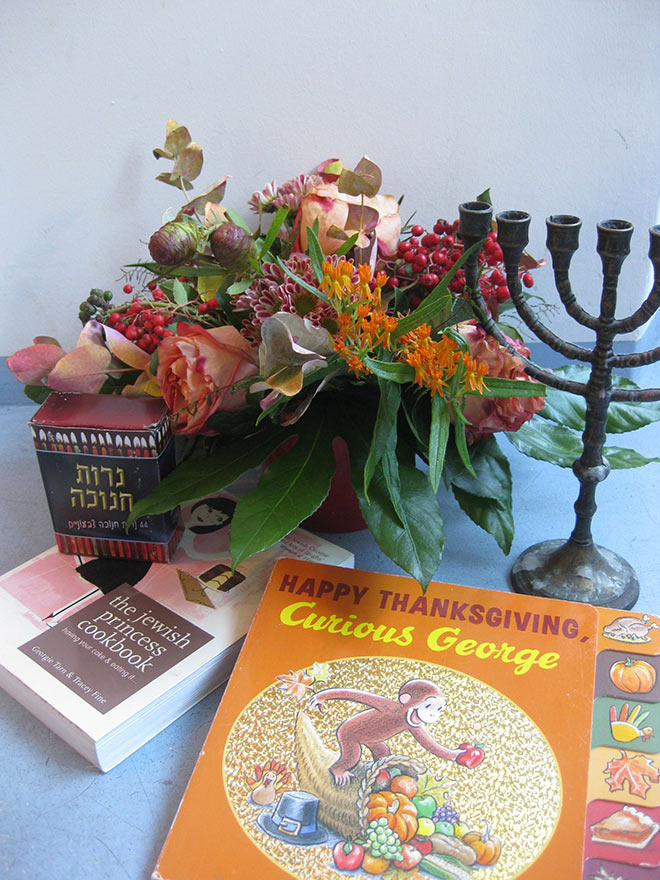 What do we have here? For starters, two small groups of religious zealots – the Pilgrims and the Maccabees. The former escaped religious persecution to foreign shores, with the aim of settling and colonizing the native peoples they found on the land. The latter fought against colonizers from a foreign empire (the Seleucids of Syria) – a kind of guerrilla warfare – in their own land. In the first case, you have a celebration of the survival of a group of immigrants with the help of / at the cost of (depending on your reading of subsequent events) a native population. In the second case, it’s a celebration of a victory of a native people against foreign rule (although the actual defeat of the Seleucids in a bloody civil war didn’t occur until many years after the re-dedication of the temple and the supposed miracle of lights).

This comparison is not going anywhere. However, I don’t think it’s a coincidence that I first learned that Thanksgiving and Hanukkah fall at the same time this year from the Dining & Wine section of the New York Times: there is one thing the two holidays do have in common. Both traditions mandate the preparation of piles of soporific, greasy food in giving thanks for survival. Turkey smothered in gravy (to give it an inkling of flavor) and sweet potatoes covered in marshmallow vs. potato pancakes and doughnuts fried in “miraculous” oil. And since this occasion won’t present itself again for another 79.000 or so years, let us forget about the colonizers and the colonized for a minute, and address the more pressing question: What to prepare for Thanksgivukkah? 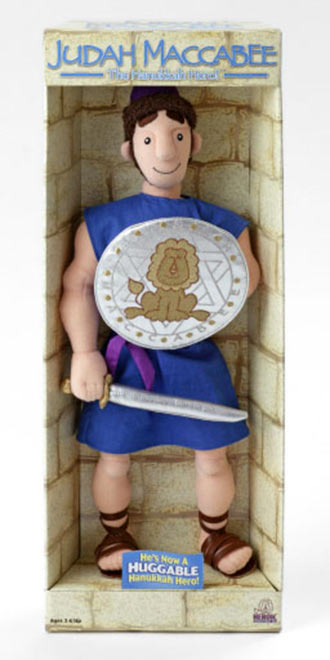 Huggable Judah Maccabee, Heroic Productions Inc., made in China, 2001-04; Jewish Museum Berlin, photo: Jens Ziehe. Further information on this object can be found in our online collections (in German)

So, inspired by the New York Times, I volunteered to provide the Hanukkah addition of our annual German-American friends’ Thanksgiving party – the menorah and the latkes. I scanned the mix-and-match recipes available online, but decided to stick to my classic Joan Nathan latkes – except I would make them with sweet potato, a Thanksgiving staple. I’ll probably leave out the celery root, apple, green onion and majoram from Nathan’s original recipe, adding cinnamon or allspice and perhaps a bit more flour to make it hang together. Then we’ll top the latkes with this lovely thanksgiving-ish apple-cranberry sauce I found in the Thanksgivukkah feature on buzzfeed.com.

PREPARATION
Preheat oven to 160°C. Place a baking sheet in oven. Place a colander in a large bowl. Line the colander with a kitchen towel. Coarsely grate the sweet potatoes and onion at the same time.

Transfer potato mixture to the towel. Gather towel tightly around the mixture and squeeze out as much liquid as possible into the bowl; discard liquid. Place potato mixture, egg, salt, pepper, cinnamon or allspice in the bowl and toss to blend. Mix in flour.

Pour enough vegetable oil into a large, heavy skillet to cover the bottom. Heat oil over medium-high heat. Working in batches, drop large spoonfuls of mixture into the skillet (ca. ¼ cup per pancake) and flatten into a round with the spatula. Fry until cooked through and crisp, about 3 minutes per side.

PREPARATION
In a medium sauce pot, combine cranberries, spices, sugar, and Manischewitz. Bring mixture to a boil, then reduce heat and simmer 20 minutes. Peel and core apples, then cut them into large chunks (approximately ½-inch cubes), and add to the cranberry mixture. Cover sauce and continue to simmer for 20 minutes, stirring occasionally. If sauce begins to stick, add water.
Remove from heat and cool to room temperature before serving.

Read the article in the New York Times 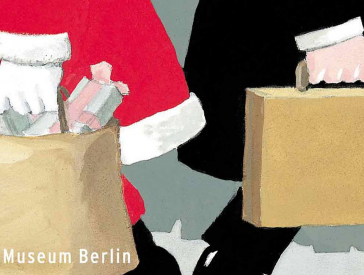 Stories of Christmas and Hanukkah